Cremation is a method of final disposition of a dead body through burning. Cremation may serve as a funeral or post-funeral rite and as an alternative to burial. In some countries, including India and Nepal, cremation on an open-air pyre is an ancient tradition. Starting in the 19th century, cremation was introduced or reintroduced into other parts of the world. In modern times, cremation is commonly carried out with a closed furnace (cremator), at a crematorium. Cremation leaves behind an average of 2.4 kg (5.3 lbs) of remains known as "ashes" or "cremains". This is not actual ash but unburnt fragments of bone mineral, which are commonly ground into powder. They do not constitute a health risk and may be buried, interred in a memorial site, retained by relatives or scattered in various ways. 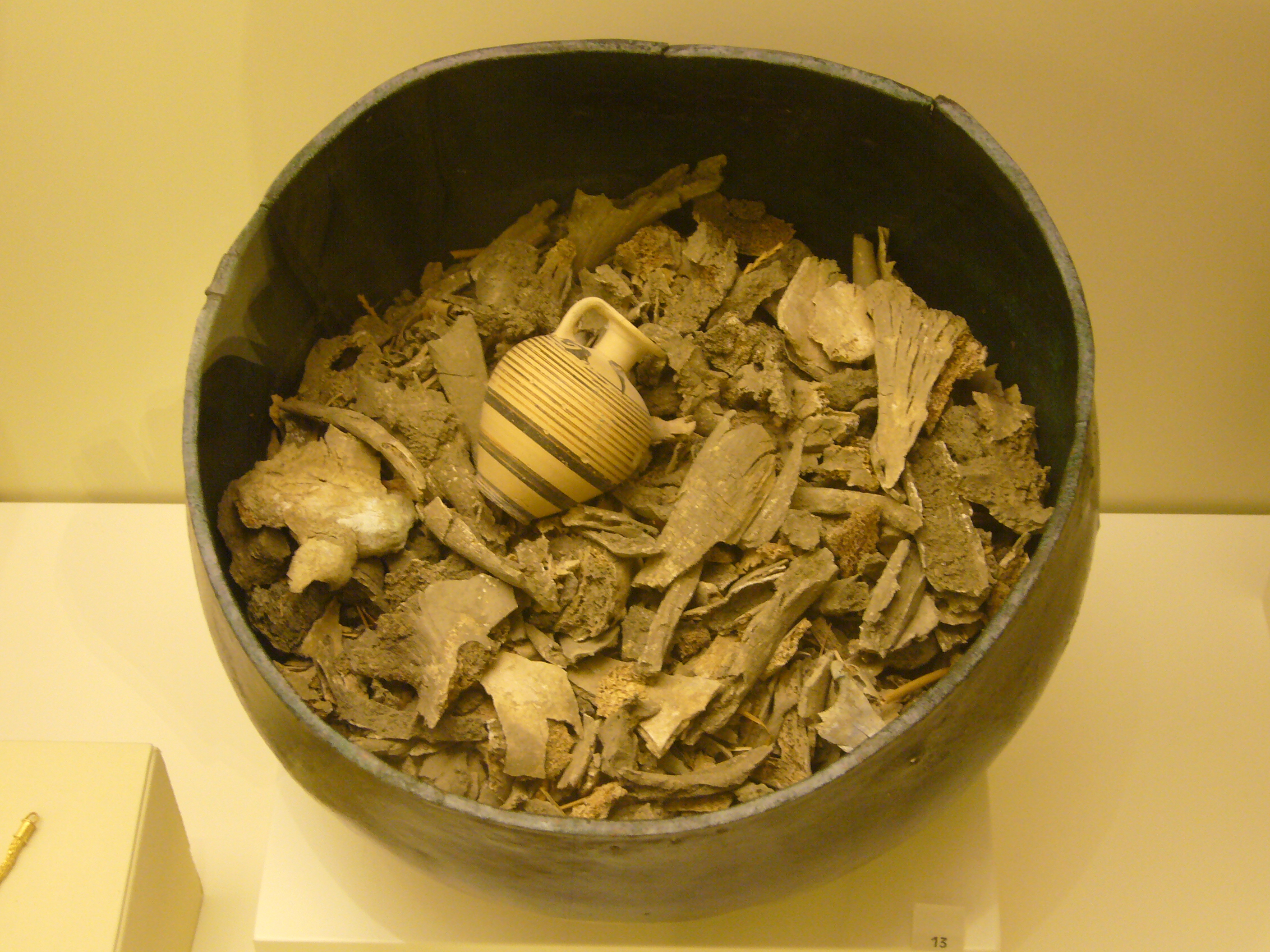 Cremation dates from at least 17,000 years ago in the archaeological record, with the Mungo Lady, the remains of a partly cremated body found at Lake Mungo, Australia. Alternative death rituals which emphasize one method of disposal: burial, cremation, or exposure—have gone through periods of preference throughout history. In the Middle East and Europe, both burial and cremation are evident in the archaeological record in the Neolithic era. Cultural groups had their own preferences and prohibitions. The ancient Egyptians developed an intricate transmigration-of-soul theology, which prohibited cremation. This was also widely adopted by Semitic peoples. The Babylonians, according to Herodotus, embalmed their dead. Early Persians practiced cremation, but this was forbidden during the Zoroastrian Period. Phoenicians practiced both cremation and burial. From the Cycladic civilisation in 3000 BCE until the Sub-Mycenaean era in 1200–1100 BCE, Greeks practiced burial. Cremation appeared around the 12th century BCE, probably influenced by Anatolia. Until the Christian era, when inhumation again became the only burial practice, both combustion and inhumation had been practiced, depending on the era and location. Romans practiced both, with cremation the rule until the later imperial period. In Europe, there are traces of cremation dating to the Early Bronze Age (c. 2000 BCE) in the Pannonian Plain and along the middle Danube. The custom became dominant throughout Bronze Age Europe with the Urnfield culture (from c. 1300 BCE). In the Iron Age, inhumation again becomes more common, but cremation persisted in the Villanovan culture and elsewhere. Homer's account of Patroclus' burial describes cremation with subsequent burial in a tumulus, similar to Urnfield burials, and qualifying as the earliest description of cremation rites. This may be an anachronism, as during Mycenaean times burial was generally preferred, and Homer may have been reflecting the more common use of cremation at the time the Iliad was written, centuries later.

Criticism of burial rites is a common aspersion by competing religions and cultures, including the association of cremation with fire sacrifice or human sacrifice. Hinduism and Jainism are notable for not only allowing but prescribing cremation. Cremation in India is first attested in the Cemetery H culture (from c. 1900 BCE), considered the formative stage of Vedic civilization. The Rigveda contains a reference to the emerging practice, in RV 10.15.14, where the forefathers "both cremated (''agnidagdhá-'') and uncremated (''ánagnidagdha-'')" are invoked. Cremation remained common but not universal, in both ancient Greece and ancient Rome. According to Cicero, burial was considered the more archaic rite in Rome. The rise of Christianity saw an end to cremation in Europe, though it may have already been in decline. This stance was influenced by its roots in Judaism, the belief in the resurrection of the body, and the example of Christ's burial. Anthropologists have been able to track the advance of Christianity throughout Europe with the appearance of cemeteries. In early Roman Britain, cremation was usual but diminished by the 4th century. It then reappeared in the 5th and 6th centuries during the migration era, when sacrificed animals were sometimes included on the pyre, and the dead were dressed in costume and with ornaments for the burning. That custom was also very widespread among the Germanic peoples of the northern continental lands from which the Anglo-Saxon migrants are supposed to have been derived, during the same period. These ashes were usually thereafter deposited in a vessel of clay or bronze in an "urn cemetery". The custom again died out with the Christian conversion of the Anglo-Saxons or Early English during the 7th century, when Christian burial became general.

Modern history in the Western World

In parts of Europe, cremation was forbidden by law, and even punishable by death if combined with Heathen rites. Cremation was sometimes used by Catholic authorities as part of punishment for accused heretics, which included burning at the stake. For example, the body of John Wycliff was exhumed years after his death and burned to ashes, with the ashes thrown in a river, explicitly as a posthumous punishment for his denial of the Roman Catholic doctrine of transubstantiation. The first to advocate for the use of cremation was the physician Sir Thomas Browne in 1658. Honoretta Brooks Pratt became the first recorded cremated European individual in modern times when she died on 26 September 1769 and was illegally cremated at the burial ground on Hanover Square in London.

In Europe, a movement to reintroduce cremation as a viable method for body disposal began in the 1870s. This was made possible by the invention of new furnace technology and contact with eastern cultures that practiced it. At the time, many proponents believed in the miasma theory, and that cremation would reduce the "bad air" that caused diseases. These movements were associated with secularism and gained a following in cultural and intellectual circles. In Italy, the movement was associated with anti-clericalism and Freemasonry, whereas these were not major themes of the movement in Britain. In 1869, the idea was presented to the Medical International Congress of Florence by Professors Coletti and Castiglioni "in the name of public health and civilization". In 1873, Professor Paolo Gorini of Lodi and Professor Ludovico Brunetti of Padua published reports of practical work they had conducted. A model of Brunetti's cremating apparatus, together with the resulting ashes, was exhibited at the Vienna Exposition in 1873 and attracted great attention