The Boeing 707 is an American long-range narrow-body airliner produced by Boeing Commercial Airplanes, its first jetliner. Developed from the Boeing 367-80, a prototype first flown in 1954, the initial first flew on December 20, 1957. Pan American World Airways began regular 707 service on October 26, 1958, and it was built until 1979. A quadjet, the 707 has a swept wing with podded engines. Its larger fuselage cross-section allowed six-abreast economy seating, retained in the later 720, 727, 737, and 757. Although it was not the first commercial jetliner in service, the 707 was the first to be widespread and is often credited with beginning the Jet Age. It dominated passenger air transport in the 1960s and remained common through the 1970s, on domestic, transcontinental, and transatlantic flights, as well as cargo and military applications. It established Boeing as a dominant airliner manufacturer with its 7x7 series. The initial, was powered by Pratt & Whitney JT3C turbojet engines. The shortened long-range and the more powerful entered service in 1959. The longer range, heavier 707-300/400 series have a larger wing and stretched slightly by . Powered by Pratt & Whitney JT4A turbojets, the 707-320 entered service in 1959, and the with Rolls-Royce Conway turbofans in 1960. The 720, a lighter short-range variant, was also introduced in 1960. Powered by Pratt & Whitney JT3D turbofans, the 707-120B debuted in 1961 and the 707-320B in 1962. The 707-120B typically flew 137 passengers in two classes over , and could accommodate 174 in one class. With 141 passengers in two classes, the 707-320/420 could fly and the 707-320B up to . The 707-320C convertible passenger-freighter model entered service in 1963, and passenger 707s have been converted to freighter configurations. Military derivatives include the E-3 Sentry airborne reconnaissance aircraft and the C-137 Stratoliner VIP transport. A total of 865 Boeing 707s were produced and delivered, not including 154 Boeing 720s. 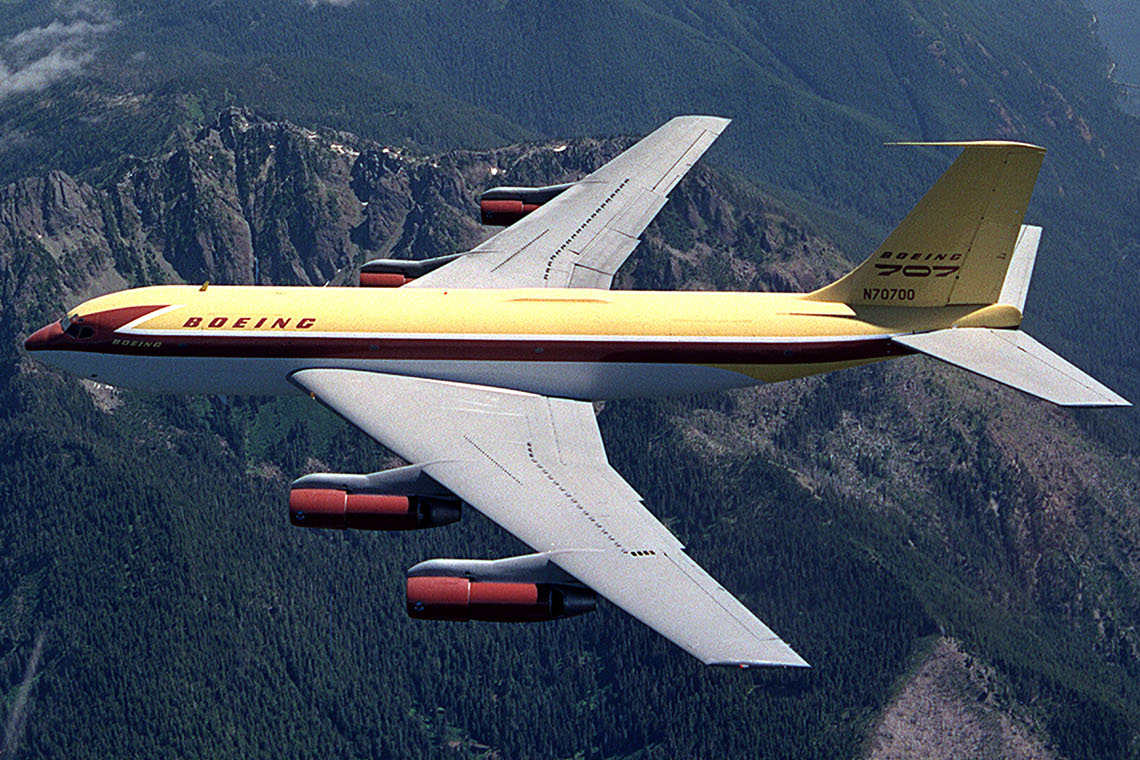 During and after World War II, Boeing was known for its military aircraft. The company had produced innovative and important bombers, from the B-17 Flying Fortress and B-29 Superfortress, to the jet-powered B-47 Stratojet and B-52 Stratofortress. The company had produced aircraft that were not as successful commercially as those from Douglas and other competitors, with the only noteworthy exception being the Boeing 314 Clipper. As Douglas and Lockheed dominated the postwar air transport boom the demand for Boeing's offering, the 377 Stratocruiser, quickly faded with only 56 examples sold and no new orders as the 1940s drew to a close. That venture had netted the company a $15 million loss. During 1949 and 1950, Boeing embarked on studies for a new jet transport and saw advantages with a design aimed at both military and civilian markets. Aerial refueling was becoming a standard technique for military aircraft, with over 800 KC-97 Stratofreighters on order. The KC-97 was not ideally suited for operations with the USAF's new fleet of jet-powered bombers; this was where Boeing's new design would win military orders. The project was enabled by the Pratt & Whitney JT3C turbojet engine, the civilian version of the J57 that yielded much more power than the previous generation of jet engines and was proving itself with the B-52. Freed from the design constraints imposed by the limitations of late-1940s jet engines, which led to the Comet disasters, developing a robust, safe, and high capacity jet aircraft was within Boeing's grasp. Boeing studied numerous wing and engine layouts for its new transport/tanker, some of which were based on the B-47 and C-97, before settling on the 367-80 quadjet prototype aircraft. The "Dash 80" took less than two years from project launch in 1952 to rollout on May 14, 1954, then first flew on July 15, 1954. The prototype was a proof-of-concept aircraft for both military and civilian use. The United States Air Force was the first customer, using it as the basis for the KC-135 Stratotanker aerial refueling airplane. Whether the passenger 707 would be profitable was far from certain. At the time, nearly all of Boeing's revenue came from military contracts. In a demonstration flight over Lake Washington outside Seattle, on August 7, 1955, test pilot Tex Johnston performed a barrel roll in the 367-80 prototype. Although he justified his unauthorized action to Bill Allen, the president of Boeing, as selling the airplane with a 1 'g' maneuver he was told not to do it again. The wide fuselage of the Dash 80 was large enough for four-abreast (two-plus-two) seating like the Stratocruiser. Answering customers' demands and under Douglas competition, Boeing soon realized this would not provide a viable payload, so it widened the fuselage to to allow five-abreast seating and use of the KC-135's tooling. Douglas Aircraft had launched its DC-8 with a fuselage width of . The airlines liked the extra space and six-abreast seating, so Boeing increased the 707's width again to compete, this time to .

The first flight of the first-production 707-120 took place on December 20, 1957, and FAA certification followed on September 18, 1958. Both test pilots Joseph John "Tym" Tymczyszyn and James R. Gannett were awarded the first Iven C. Kincheloe Award for the test flights that led to certification. A number of changes were incorporated into the production models from the prototype. A Krueger flap was installed along the leading edge between the inner and outer engines on early 707-120 and -320 models. This was in response to de Havilland Comet overrun accidents which occurred after over-rotating on take-off. Wing stall would also occur on the 707 with over-rotation so the leading-edge flaps were added to prevent stalling even with the tail dragging on the runway.

The initial standard model was the 707-120 with JT3C turbojet engines. Qantas ordered a shorter-bodied version called the 707-138, which was a -120 with six fuselage frames removed, three in front of the wings, and three aft. The frames in the 707 were set apart, so this resulted in a shortening of to a length of . With the maximum takeoff weight the same as that of the -120 (), the -138 was able to fly the longer routes that Qantas needed. Braniff International Airways ordered the higher-thrust version with Pratt & Whitney JT4A engines, the 707-220. The final major derivative was the 707-320, which featured an extended-span wing and JT4A engines, while the 707-420 was the same as the -320, but with Conway turbofan engines. Tex Johnston recommended Boeing increase the height of the tail fin, add a boosted rudder, as well as add a ventral fin. These modifications were aimed at mitigating Dutch roll by providing more directional stability in yaw. Though initially fitted with turbojet engines, the dominant engine for the Boeing 707 family was the Pratt & Whitney JT3D, a turbofan variant of the JT3C with lower fuel consumption and higher thrust. JT3D-engined 707s and 720s were denoted with a "B" suffix. While many 707-120Bs and -720Bs were conversions of existing JT3C-powered machines, 707-320Bs were available only as newly built aircraft, as they had a stronger structure to support a maximum takeoff weight increased by , along with modifications to the wing. The 707-320B series enabled nonstop westbound flights from Europe to the West Coast of the United States and from the US to Japan. The final 707 variant was the 707-320C, (C for "Convertible"), which had a large fuselage door for cargo. It had a revised wing with three-sectioned leading-edge flaps, improving takeoff and landing performance and allowing the ventral fin to be removed (although the taller fin was retained). The 707-320Bs built after 1963 used the same wing as the -320C and were known as 707-320B Advanced aircraft. Production of the passenger 707 ended in 1978. In total, 1,010 707s were built for civilian use, though many of these found their way to military service. The 707 production line remained open for purpose-built military variants until 1991, with the last new-build 707 airframes built as E-3 and E-6 aircraft. Traces of the 707 are still found in the 737, which uses a modified version of the 707's fuselage, as well as the same external nose and cockpit configurations as those of the 707. These were also used on the previous 727, while the 757 also used the 707 fuselage cross-section. 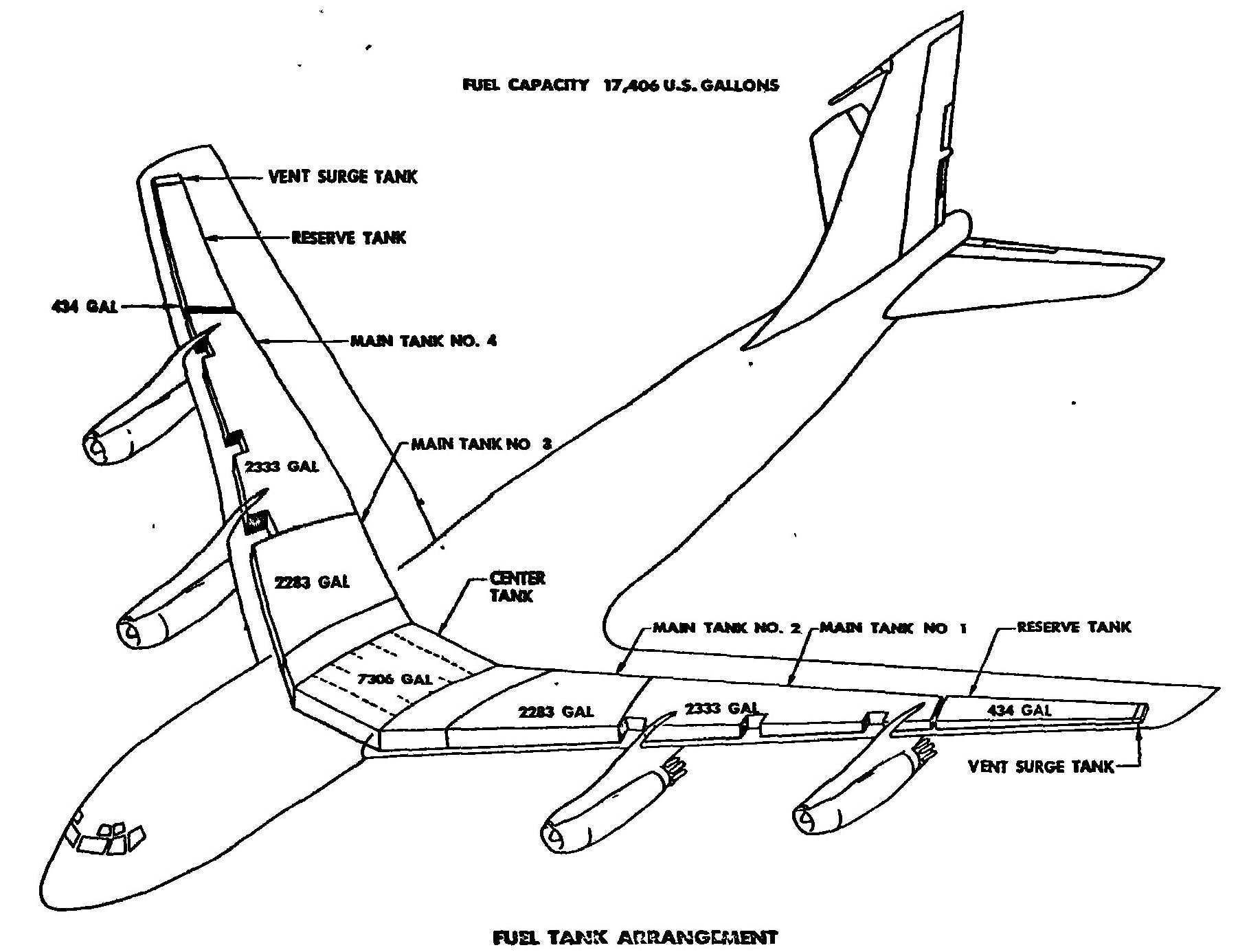 The 707's wings are swept back at 35°, and like all swept-wing aircraft, display an undesirable "Dutch roll" flying characteristic that manifests itself as an alternating combined yawing and rolling motion. Boeing already had considerable experience with this on the B-47 and B-52, and had developed the yaw damper system on the B-47 that would be applied to later swept-wing configurations like the 707. However, many pilots new to the 707 had no experience with this instability, as they were mostly accustomed to flying straight-wing propeller-driven aircraft such as the Douglas DC-7 and Lockheed Constellation. On one customer-acceptance flight, where the yaw damper was turned off to familiarize the new pilots with flying techniques, a trainee pilot's actions violently exacerbated the Dutch roll motion and caused three of the four engines to be torn from the wings. The plane, a brand new 707-227, ''N7071'', destined for Braniff, crash-landed on a river bed north of Seattle at Arlington, Washington, killing four of the eight occupants. In his autobiography, test pilot Tex Johnston describes a Dutch roll incident he experienced as a passenger on an early commercial 707 flight. As the aircraft's movements did not cease and most of the passengers became ill, he suspected a misrigging of the directional autopilot (yaw damper). He went to the cockpit and found the crew unable to understand and resolve the situation. He introduced himself and relieved the ashen-faced captain, who immediately left the cockpit feeling ill. Johnston disconnected the faulty autopilot and manually stabilized the plane "with two slight control movements".

The 707 uses engine-driven turbocompressors to supply compressed air for cabin pressurization. On many commercial 707s, the outer port (number 1) engine mount is distinctly different from the other three, as this engine is not fitted with a turbocompressor. Later-model 707s typically had this configuration, although American Airlines had turbocompressors on engines 2 and 3 only. Early 707 models often had turbocompressor fairings on all four engines, but with only two or three compressors installed. The JT3D-3B engines are readily identifiable by the large gray secondary-air inlet doors in the nose cowl. These doors are fully open (sucked in at the rear) during takeoff to provide additional air. The doors automatically close with increasing airspeed. The 707 was the first commercial jet aircraft to be fitted with clamshell-type thrust reversers.

Pratt & Whitney, in a joint venture with Seven Q Seven (SQS) and Omega Air, selected the JT8D-219 as a replacement powerplant for Boeing 707-based aircraft, calling their modified configuration a 707RE. Northrop Grumman selected the -219 to re-engine the US Air Force's fleet of 19 E-8 Joint STARS aircraft, which would allow the J-STARS more time on station due to the engine's greater fuel efficiency. NATO also planned to re-engine their fleet of E-3 Sentry AWACS aircraft. The -219 is publicized as being half the cost of the competing powerplant, the CFM International CFM56, and is 40 dB quieter than the original JT3D engines.