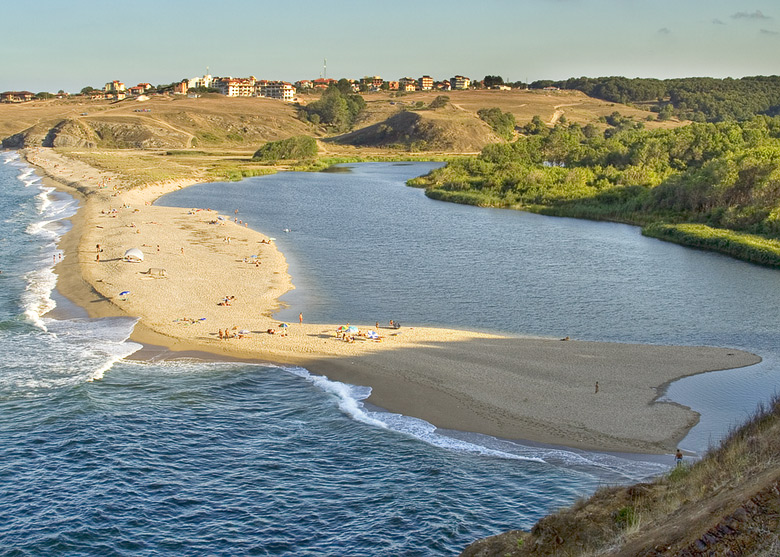 , with the skyline of Batumi on the horizon]] in Turkey ]] The Black Sea is a marginal sea of the Atlantic Ocean lying between Europe and Asia; east of the Balkans (Southeast Europe), south of the East European Plain in Eastern Europe, west of the Caucasus, and north of Anatolia in Western Asia. It is supplied by major rivers, principally the Danube, Dnieper, and Don. The watersheds of many countries drain into the sea beyond the six that share its coast. The Black Sea covers (not including the Sea of Azov), a maximum depth of , and a volume of , making it the world's largest inland body of water. Most of its coasts rapidly ascend. These rises are the Pontic Mountains to the south, bar the southwest facing peninsulas, the Caucasus Mountains to the east, and the Crimean Mountains to the mid-north. In the west the coast is generally small floodplains below foothills such as the Strandzha; Cape Emine, a dwindling of the east end of the Balkan Mountains; and the Dobruja Plateau considerably further north. The longest east-west extent is about . Important cities along the coast include Istanbul, Odessa, Varna, Samsun, Sochi, Sevastopol, Constanța, Trabzon, Novorossiysk, Burgas, Batumi, etc. The Black Sea is bordered by Bulgaria, Georgia, Romania, Russia, Turkey, and Ukraine. It has a positive water balance with an annual net outflow of per year through the Bosporus and the Dardanelles into the Aegean Sea. While the net flow of water through the Bosporus and Dardanelles (known collectively as the Turkish Straits) is out of the Black Sea, generally water is flowing in both directions simultaneously. Denser, more saline water from the Aegean flows into the Black Sea underneath the less dense, fresher outflowing water from the Black Sea. This creates a significant and permanent layer of deep water that does not drain or mix and is therefore anoxic. This anoxic layer is responsible for the preservation of ancient shipwrecks which have been found in the Black Sea. The Black Sea ultimately drains into the Mediterranean Sea, via the Turkish Straits and the Aegean Sea. The Bosporus Strait connects it to the small Sea of Marmara which in turn is connected to the Aegean Sea via the Strait of the Dardanelles. To the north, the Black Sea is connected to the Sea of Azov by the Kerch Strait. The water level has varied significantly over geological time. Due to these variations in the water level in the basin, the surrounding shelf and associated aprons have sometimes been dry land. At certain critical water levels, connections with surrounding water bodies can become established. It is through the most active of these connective routes, the Turkish Straits, that the Black Sea joins the world ocean. During geological periods when this hydrological link was not present, the Black Sea was an endorheic basin, operating independently of the global ocean system (similar to the Caspian Sea today). Currently, the Black Sea water level is relatively high; thus, water is being exchanged with the Mediterranean. The Turkish Straits connect the Black Sea with the Aegean Sea and comprise the Bosporus, the Sea of Marmara, and the Dardanelles. The Black Sea undersea river is a current of particularly saline water flowing through the Bosporus Strait and along the seabed of the Black Sea, the first of its kind discovered.

The International Hydrographic Organization defines the limits of the Black Sea as follows: