Beverly Hills is a city in Los Angeles County, California. Located within and surrounded by the cities of Los Angeles and West Hollywood, it had a population of 34,109 at the 2010 census and an estimated population of 33,792 in 2019. The city is home to many celebrities, luxury hotels, and the Rodeo Drive shopping district. Originally a Spanish ranch where lima beans were grown, Beverly Hills was incorporated in 1914 by a group of investors who had failed to find oil, but found water instead and eventually decided to develop it into a town.

thumb|right|Newspaper advertisement for Beverly Hills subdivision, October 21, 1906 The area was settled by Maria Rita Quinteros de Valdez and her husband in 1828. They called their of property the ''Rancho Rodeo de las Aguas''. In 1854, she sold the ranch to Benjamin Davis Wilson (1811–1878) and Henry Hancock (1822–1883). By the 1880s, the ranch had been subdivided into parcels of and was being rapidly bought up by Anglos from Los Angeles and the East coast. Gaspar de Portolá arrived in the area that would later become Beverly Hills on August 3, 1769, traveling along native trails which followed the present-day route of Wilshire Boulevard. Henry Hammel and Andrew H. Denker acquired most of it and used it for farming lima beans. At this point, the area was known as the Hammel and Denker Ranch. By 1888, they were planning to build a town called Morocco on their holdings. 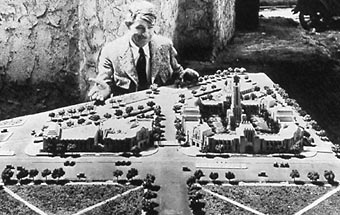