A hot dog (also spelled hotdog ) is a food consisting of a grilled or steamed sausage served in the slit of a partially sliced bun. It can also refer to the sausage itself. The sausage used is a wiener (Vienna sausage) or a frankfurter (Frankfurter Würstchen, also just called frank). The names of these sausages also commonly refer to their assembled dish. Hot dog preparation and condiments vary worldwide. Typical condiments include mustard, ketchup, mayonnaise, relish, and cheese sauce, and common garnishes include onions, sauerkraut, jalapeños, chili, grated cheese, coleslaw, bacon, and olives. Hot dog variants include the corn dog and pigs in a blanket. The hot dog's cultural traditions include the Nathan's Hot Dog Eating Contest and the Oscar Mayer Wienermobile. These types of sausages were culturally imported from Germany and became popular in the United States. It became a working-class street food in the U.S., sold at stands and carts. The hot dog became closely associated with baseball and American culture. Although particularly connected with New York City and its cuisine, the hot dog eventually became ubiquitous throughout the US during the 20th century. Its preparation varies regionally in the country, emerging as an important part of other regional cuisines, including Chicago street cuisine.

The word "frankfurter" comes from Frankfurt, Germany, where pork sausages similar to hot dogs originated. These sausages, ''Frankfurter Würstchen'', were known since the 13th century and given to the people on the event of imperial coronations, starting with the coronation of Maximilian II, Holy Roman Emperor as King. "Wiener" refers to Vienna, Austria (german: Wien), home to a sausage made of a mixture of pork and beef. Johann Georg Lahner, an 18th/19th century butcher from the Franconian city of Coburg, is said to have brought the ''Frankfurter Würstchen'' to Vienna, where he added beef to the mixture and simply called it ''Frankfurter''. Nowadays, in German-speaking countries, except Austria, hot dog sausages are called ''Wiener'' or ''Wiener Würstchen'' (''Würstchen'' means "little sausage"), to differentiate them from the original pork-only mixture from Frankfurt. In Swiss German, it is called ''Wienerli'', while in Austria the terms ''Frankfurter'' or ''Frankfurter Würstel'' are used.

A German immigrant named Feuchtwanger, from Frankfurt, in Hesse, allegedly pioneered the practice in the American midwest; there are several versions of the story with varying details. According to one account, Feuchtwanger's wife proposed the use of a bun in 1880: Feuchtwanger sold hot dogs on the streets of St. Louis, Missouri, and provided gloves to his customers so that they could handle the sausages without burning their hands. Losing money when customers did not return the gloves, Feuchtwanger's wife suggested serving the sausages in a roll instead. In another version, Antoine Feuchtwanger, or Anton Ludwig Feuchtwanger, served sausages in rolls at the World's Fair – either at the 1904 Louisiana Purchase Exposition in St. Louis, or, earlier, at the 1893 World's Columbian Exposition, in Chicago – again, allegedly because the white gloves provided to customers to protect their hands were being kept as souvenirs. Another possible origin for serving the sausages in rolls is the pieman Charles Feltman, at Coney Island in New York City. In 1867 he had a cart made with a stove on which to boil sausages, and a compartment to keep buns in which they were served fresh. In 1871 he leased land to build a permanent restaurant, and the business grew, selling far more than just the "Coney Island Red Hots" as they were known.

The term ''dog'' has been used as a synonym for sausage since the 1800s, possibly from accusations that sausage makers used dog meat in their sausages. In the early 20th century, consumption of dog meat in Germany was common. The suspicion that sausages contained dog meat was "occasionally justified". An early use of the term ''hot dog'' in reference to sausage-meat appears in the ''Evansville'' (Indiana) ''Daily Courier'' (September 14, 1884):

even the innocent 'wienerworst' man will be barred from dispensing hot dog on the street corner.

the 'hot dog' was quickly inserted in a gash in a roll.

Subsequent uses include the ''New Brunswick ''(New Jersey)'' Daily Times'' (May 20, 1893), the ''New York World'' (May 26, 1893), and the ''Knoxville ''(Tennessee)'' Journal'' (September 28, 1893). According to one story, the use of the complete phrase ''hot dog'' in reference to sausage was coined by the newspaper cartoonist Thomas Aloysius "Tad" Dorgan around 1900 in a cartoon recording the sale of hot dogs during a New York Giants baseball game at the Polo Grounds. 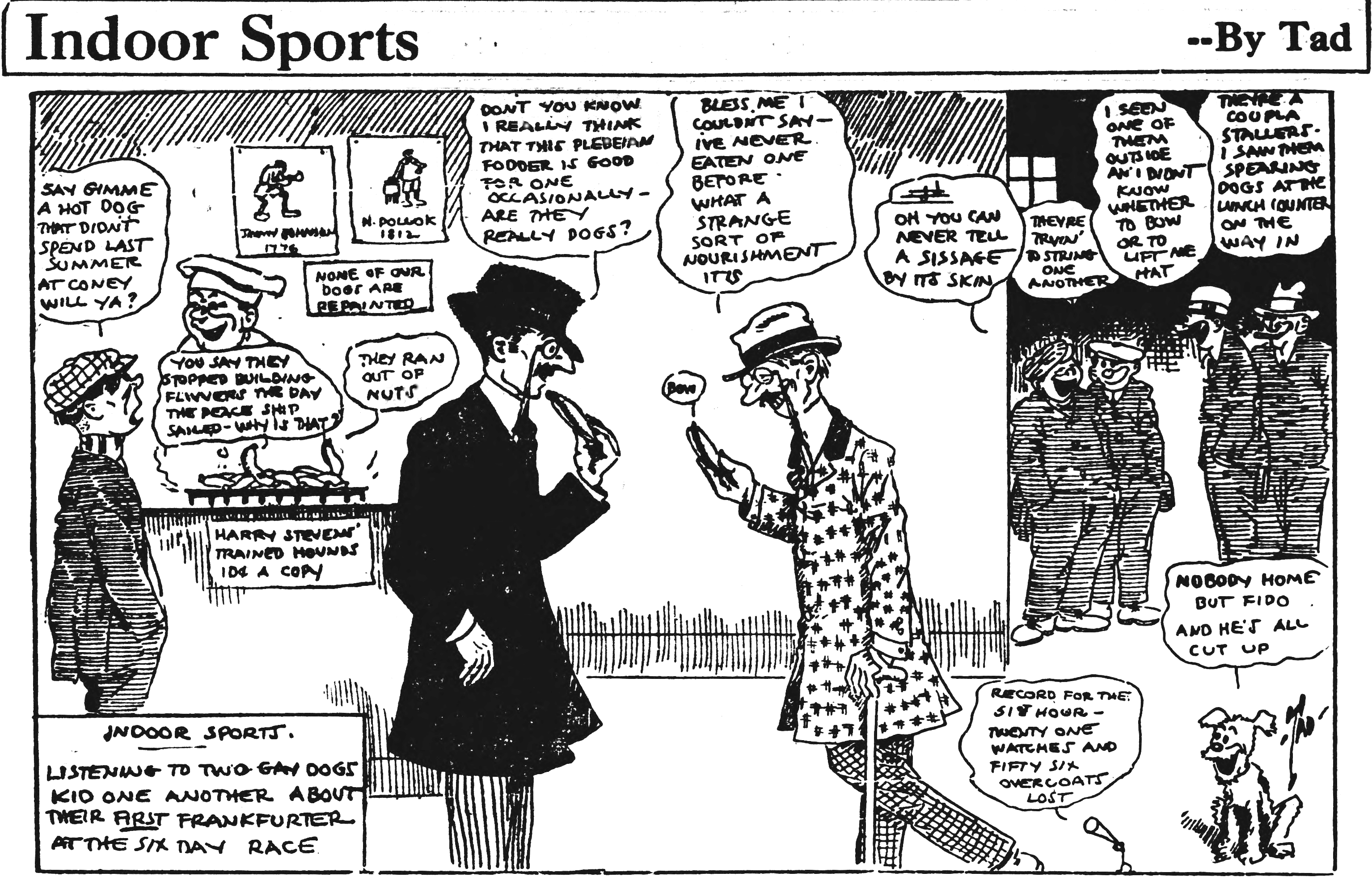 However, Dorgan's earliest usage of ''hot dog'' was not in reference to a baseball game at the Polo Grounds, but to a bicycle race at Madison Square Garden, in ''The New York Evening Journal'' December 12, 1906, by which time the term ''hot dog'' in reference to sausage was already in use. No copy of the apocryphal cartoon has ever been found.

Hot dogs are prepared commercially by mixing the ingredients (meats, spices, binders and fillers) in vats where rapidly moving blades grind and mix the ingredients in the same operation. This mixture is forced through tubes into casings for cooking. Most hot dogs sold in the US are "skinless" rather than "natural casing" sausages.

As with most sausages, hot dogs must be in a casing to be cooked. Traditional casing is made from the small intestines of sheep. The products are known as "natural casing" hot dogs or frankfurters.

There is an ongoing debate about whether or not a hot dog fits the description of a sandwich. The National Hot Dog and Sausage Council (NHDSC) has declared that a hot dog is not a sandwich. Hot dog eating champion Joey Chestnut and former hot dog eating champion Takeru Kobayashi agree with the NHDSC. Dictionary Merriam-Webster, on the other hand, has stated that a hot dog is indeed a sandwich. Former United States Supreme Court justice Ruth Bader Ginsburg also weighed in on the matter, stating that a hot dog might be categorized to be a sandwich, but ultimately it comes down to the definition of a sandwich. She went on to acknowledge that a hot dog bun is a single roll that is not sliced all the way through and in that way is similar to a submarine sandwich. The topic remains widely and heatedly debated in online internet forums. In 2011, Panini Happy ran an online survey with a slight majority of respondents (54%) indicating that they do not consider hot dogs to be sandwiches. A 2020 survey indicated that public opinion may be shifting and that 64% of respondents do not consider a hot dog to be a sandwich.

Although hot dogs are cooked during manufacture, it is still recommended that they are heated to an internal temperature of at least 165°F (75°C) prior to consumption. Most hot dogs are high in fat and salt and have preservatives sodium nitrate and sodium nitrite, which are contributors to nitrate-containing chemicals classified as group 1 carcinogens by the World Health Organization, although this has been disputed. These health concerns have resulted in manufacturers offering alternative product lines made from turkey and chicken, and uncured, low-sodium, and "all-natural" franks. Hot dogs have relatively low carcinogenic heterocyclic amine (HCA) levels compared to other types of ready-to-eat meat products because they are manufactured at low temperatures. An American Institute for Cancer Research (AICR) report found that consuming one daily 50-gram serving of processed meat — about one hot dog — increases long-term risk of colorectal cancer by 20 percent. Thus, eating a hot dog every day would increase the probability of contracting colorectal cancer from 5.8 percent to 7 percent. The AICR's warning campaign has been criticized as being "attack ads".