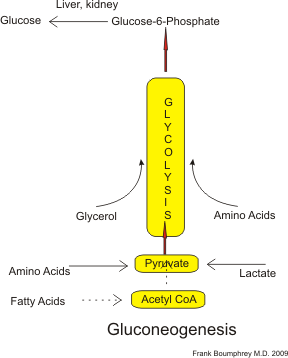 Gluconeogenesis (GNG) is a metabolic pathway that results in the generation of glucose from certain non-carbohydrate carbon substrates. It is a ubiquitous process, present in plants, animals, fungi, bacteria, and other microorganisms. In vertebrates, gluconeogenesis occurs mainly in the liver and, to a lesser extent, in the cortex of the kidneys. It is one of two primary mechanisms – the other being degradation of glycogen (glycogenolysis) - used by humans and many other animals to maintain blood glucose levels, avoiding low levels (hypoglycemia). In ruminants, because dietary carbohydrates tend to be metabolized by rumen organisms, gluconeogenesis occurs regardless of fasting, low-carbohydrate diets, exercise, etc. In many other animals, the process occurs during periods of fasting, starvation, low-carbohydrate diets, or intense exercise. In humans, substrates for gluconeogenesis may come from any non-carbohydrate sources that can be converted to pyruvate or intermediates of glycolysis (see figure). For the breakdown of proteins, these substrates include glucogenic amino acids (although not ketogenic amino acids); from breakdown of lipids (such as triglycerides), they include glycerol, odd-chain fatty acids (although not even-chain fatty acids, see below); and from other parts of metabolism they include lactate from the Cori cycle. Under conditions of prolonged fasting, acetone derived from ketone bodies can also serve as a substrate, providing a pathway from fatty acids to glucose. Although most gluconeogenesis occurs in the liver, the relative contribution of gluconeogenesis by the kidney is increased in diabetes and prolonged fasting. The gluconeogenesis pathway is highly endergonic until it is coupled to the hydrolysis of ATP or GTP, effectively making the process exergonic. For example, the pathway leading from pyruvate to glucose-6-phosphate requires 4 molecules of ATP and 2 molecules of GTP to proceed spontaneously. These ATPs are supplied from fatty acid catabolism via beta oxidation.

In humans the main gluconeogenic precursors are lactate, glycerol (which is a part of the triacylglycerol molecule), alanine and glutamine. Altogether, they account for over 90% of the overall gluconeogenesis. Other glucogenic amino acids and all citric acid cycle intermediates (through conversion to oxaloacetate) can also function as substrates for gluconeogenesis.