A cross is a geometrical figure consisting of two intersecting lines or bars, usually perpendicular to each other. The lines usually run vertically and horizontally. A cross of oblique lines, in the shape of the Latin letter
X

, is also termed a
saltire A saltire, also called Saint Andrew's Cross or the crux decussata, is a heraldic symbol in the form of a diagonal cross, like the shape of the letter X in Roman type. The word comes from the Middle French ''sautoir'', Middle Latin ''saltatoria' ...
in heraldic terminology. Throughout centuries the cross in its various shapes and forms was a symbol of various beliefs. In pre-Christian times it was a pagan religious symbol throughout Europe and western Asia. In ancient times, the effigy of a man hanging on a cross was set up in the fields to protect the crops. The cross was even considered a male symbol of the phallic Tree of Life; thus it often appeared in conjunction with the female-genital circle or oval, to signify the sacred marriage, as in Egyptian amulet Nefer with male cross and female orb, considered as an amulet of blessedness, a charm of sexual harmony.

The word '' cross'' is recorded in 10th-century
Old English Old English (, ), or Anglo-Saxon, is the earliest recorded form of the English language English is a West Germanic languages, West Germanic language first spoken in History of Anglo-Saxon England, early medieval England, which has eventu ...
as ''cros'', exclusively for the instrument of Christ's crucifixion, replacing the native Old English word '' rood''. The word's history is complicated; it appears to have entered English from
Old Irish Old Irish (''Goídelc''; ga, Sean-Ghaeilge; gd, Seann Ghàidhlig; gv, Shenn Yernish or ; Ogham, Old Irish: ᚌᚑᚔᚇᚓᚂᚉ), sometimes called Old Gaelic, is the oldest form of the Goidelic for which extensive written texts are extant. I ...
, possibly via
Old Norse Old Norse, Old Nordic, or Old Scandinavian was a North Germanic languages, North Germanic language that was spoken by inhabitants of Scandinavia and their Viking expansion, overseas settlements from about the 7th to the 15th centuries. The P ...
, ultimately from the Latin (or its accusative and its genitive ), "stake, cross". The English verb ''to cross'' arises from the noun , first in the sense "to make the sign of the cross"; the generic meaning "to intersect" develops in the 15th century. The Latin word was, however, influenced by
popular etymology A false etymology (fake etymology, popular etymology, etymythology, pseudo-etymology, or par(a)etymology), sometimes called folk etymology – although the latter term is also a technical term in linguistics – is a popularly held but false belie ...
by a native Germanic word reconstructed as *''krukjo'' (English '' crook'', Old English , Old Norse , Old High German ). This word, by conflation with Latin , gave rise to Old French (modern French ), the term for a shepherd's crook, adopted in English as '' crosier''. Latin referred to the gibbet where criminals were executed, a stake or pole, with or without , on which the condemned were impaled or hanged, but more particularly a cross or the pole of a carriage. The derived verb means "to put to death on the cross" or, more frequently, "to put to the rack, to torture, torment", especially in reference to mental troubles. In the Roman world, replaced as the name of some cross-like instruments for lethal and temporary punishment, ranging from a
forked cross A forked cross, is a Gothic (architecture), Gothic cross in the form of the letter Y that is also known as a crucifixus dolorosus, furca, ypsilon cross, Y-cross, robber's cross or thief's cross.
. The field of etymology is of no help in any effort to trace a supposed original meaning of ''crux''. A ''crux'' can be of various shapes: from a single beam used for impaling or suspending () to the various composite kinds of cross () made from more beams than one. The latter shapes include not only the traditional †-shaped cross (the ), but also the T-shaped cross (the or tau cross), which the descriptions in antiquity of the execution cross indicate as the normal form in use at that time, and the X-shaped cross (the ''crux decussata'' or
saltire A saltire, also called Saint Andrew's Cross or the crux decussata, is a heraldic symbol in the form of a diagonal cross, like the shape of the letter X in Roman type. The word comes from the Middle French ''sautoir'', Middle Latin ''saltatoria' ...
). The Greek equivalent of Latin ''crux'' "stake, gibbet" is , found in texts of four centuries or more before the gospels and always in the plural number to indicate a stake or pole. From the first century BC, it is used to indicate an instrument used in executions. The Greek word is used in descriptions in antiquity of the execution cross, which indicate that its normal shape was similar to the Greek letter tau ( Τ).

Due to the simplicity of the design (two intersecting lines), cross-shaped incisions make their appearance from deep prehistory; as petroglyphs in European Cult (religious practice), cult caves, dating back to the beginning of the Upper Paleolithic, and throughout prehistory to the Iron Age. Also of prehistoric age are numerous variants of the simple cross mark, including the ''swastika, crux gammata'' with curving or angular lines, and the Egyptian ''ankh, crux ansata'' with a loop. Speculation has associated the cross symbol – even in the prehistoric period – with astronomical or cosmological symbology involving "classical element, four elements" (Chevalier, 1997) or the cardinal directions, cardinal points, or the unity of a vertical axis mundi or celestial pole with the horizontal world (Koch, 1955). Speculation of this kind became especially popular in the mid- to late-19th century in the context of comparative mythology seeking to tie Christian mythology to ancient Religious cosmology, cosmological myths. Influential works in this vein included G. de Mortillet (1866), L. Müller (1865), W. W. Blake (1888), Ansault (1891), etc. 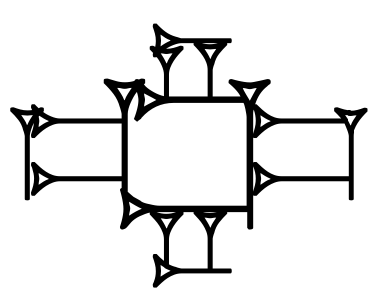 The shape of the cross (''crux'', ''stauros'' "stake, gibbet"), as represented by the letter Tau (letter), T, came to be used as a "seal" or symbol of Early Christianity by the 2nd century. Clement of Alexandria in the early 3rd century calls it ("the Lord's sign") he repeats the idea, current as early as the Epistle of Barnabas, that the number 318 (in Greek numerals, ΤΙΗ) in Genesis 14:14 was a foreshadowing (a "type") of the cross (the letter Tau) and of Jesus (the letters Iota Eta). Clement's contemporary Tertullian rejects the accusation that Christians are ''crucis religiosi'' (i.e. "adorers of the gibbet"), and returns the accusation by likening the worship of pagan idols to the worship of poles or stakes. In his book ''De Corona'', written in 204, Tertullian tells how it was already a tradition for Christians to trace repeatedly on their foreheads the sign of the cross. While early Christians used the T-shape to represent the cross in writing and gesture, the use of the Greek cross and Latin cross, i.e. crosses with intersecting beams, appears in Christian art towards the end of Late Antiquity. An early example of the cruciform halo, used to identify Christ in paintings, is found in the ''Miracles of the Loaves and Fishes'' mosaic of Sant'Apollinare Nuovo, Ravenna (6th century). The Patriarchal cross, a Latin cross with an additional horizontal bar, first appears in the 10th century. A wide variation of cross symbols is introduced for the purposes of Crosses in heraldry, heraldry beginning in the age of the Crusades.

The cross mark is used to mark a position, or as a check mark, but also to mark :wikt:deletion, deletion. Derived from Greek Chi (letter), Chi are the Latin alphabet, Latin letter
X

, Cyrillic Kha (Cyrillic), Kha and possibly runic Gyfu. Egyptian hieroglyphs involving cross shapes include ''ankh'' "life", ''Cross-ndj (hieroglyph), ndj'' "protect" and ''Nefer, nfr'' "good; pleasant, beautiful". Sumerian cuneiform had a simple cross-shaped character, consisting of a horizontal and a vertical wedge (:wikt:𒈦, 𒈦), read as ''maš'' "tax, yield, interest"; the superposition of two diagonal wedges results in a decussate cross (:wikt:𒉽, 𒉽), read as ''pap'' "first, pre-eminent" (the superposition of these two types of crosses results in the eight-pointed star used as the sign for "sky" or "deity" (:wikt:𒀭, 𒀭), DINGIR). The cuneiform script has other, more complex, cruciform characters, consisting of an arrangement of boxes or the fourfold arrangement of other characters, including the archaic cuneiform characters Liste der archaischen Keilschriftzeichen, LAK-210, LAK-276, LAK-278, LAK-617 and the classical sign EZEN (𒂡). Phoenician ''tāw'' is still cross-shaped in Paleo-Hebrew alphabet and in some Old Italic scripts (Raetic and Lepontic), and its descendant T becomes again cross-shaped in the Latin Lower case, minuscule t. The Plus and minus signs, plus sign (+) is derived from Latin t via a simplification of a ligature for ''et'' "and" (introduced by Johannes Widmann in the late 15th century). The letter Aleph is cross-shaped in Aramaic script, Aramaic and paleo-Hebrew. Egyptian hieroglyphs with cross-shapes include Gardiner's sign list, Gardiner List of hieroglyphs/Z, Z9 – Z11 ("crossed sticks", "crossed planks"). Other, unrelated cross-shaped letters include Brahmi ''ka'' (predecessor of the Devanagari letter क) and Old Turkic script, Old Turkic (Orkhon) ''d²'' and Old Hungarian alphabet, Old Hungarian ''b'', and Katakana ナ ''Na (kana), na'' and メ''Me (kana), me''. The multiplication sign (×), often attributed to William Oughtred (who first used it in an appendix to the 1618 edition of John Napier's ''Descriptio'') apparently had been in occasional use since the mid 16th century. Other typographical symbols resembling crosses include the dagger (typography), dagger or ''obelus'' (†), the Chinese numerals, Chinese (wikt:十, 十, Radical 24, Kangxi radical 24) and Roman numerals, Roman (X ten). Unicode has a variety of cross symbols in the "Dingbat" block (U+2700–U+27BF) : :✕ ✖ ✗ ✘ ✙ ✚ ✛ ✜ ✝ ✞ ✟ ✠ ✢ ✣ ✤ ✥ The Miscellaneous Symbols block (U+2626 to U+262F) adds three specific Christian cross variants, viz. the Patriarchal cross (☦), Cross of Lorraine (☨) and "Cross of Jerusalem" (implemented as Cross potent, ☩).

Cross shapes are made by a variety of physical gestures. Crossed fingers, Crossing the fingers of one hand is a common invocation of the symbol. The sign of the cross associated with Christian genuflection is made with one hand: in Eastern Orthodox tradition the sequence is head-heart-right shoulder-left shoulder, while in Oriental Orthodox, Catholic and Anglican tradition the sequence is head-heart-left-right. Crossing the index fingers of both hands represents and a charm against evil in European folklore. Other gestures involving more than one hand include the "cross my heart" movement associated with making a promise and the Tau shape of the referee's "time out" hand signal. In Chinese-speaking cultures, crossed index fingers represent the number 10.

Other things known as "cross"

*Crux, or the Southern Cross, is a cross-shaped constellation in the Southern Hemisphere. It appears on the national flags of Australia, Brazil, New Zealand, Niue, Papua New Guinea and Samoa. *Notable free-standing Christian crosses (or Summit crosses): The tallest cross, at 152.4 metres high, is part of Francisco Franco's monumental "Valley of the Fallen", the ''Monumento Nacional de Santa Cruz del Valle de los Caidos'' in Spain. A cross at the junction of Interstates Interstate 57, 57 and Interstate 70, 70 in Effingham, Illinois, is purportedly the tallest in the United States, at 198 feet (60.3 m) tall. The tallest freestanding cross in the United States is located in Saint Augustine, FL and stands 208 feet. *The tombs at Naqsh-e Rustam, Iran, made in the 5th century BC, are carved into the cliffside in the shape of a cross. They are known as the "Persian crosses". * Cross-ndj (hieroglyph) * Cross cap, topological surface * Crossroads (mythology) * Crossbuck


Seiyaku.com
all Crosses - probably the largest collection on the Internet
Variations of Crosses - Images and Meanings