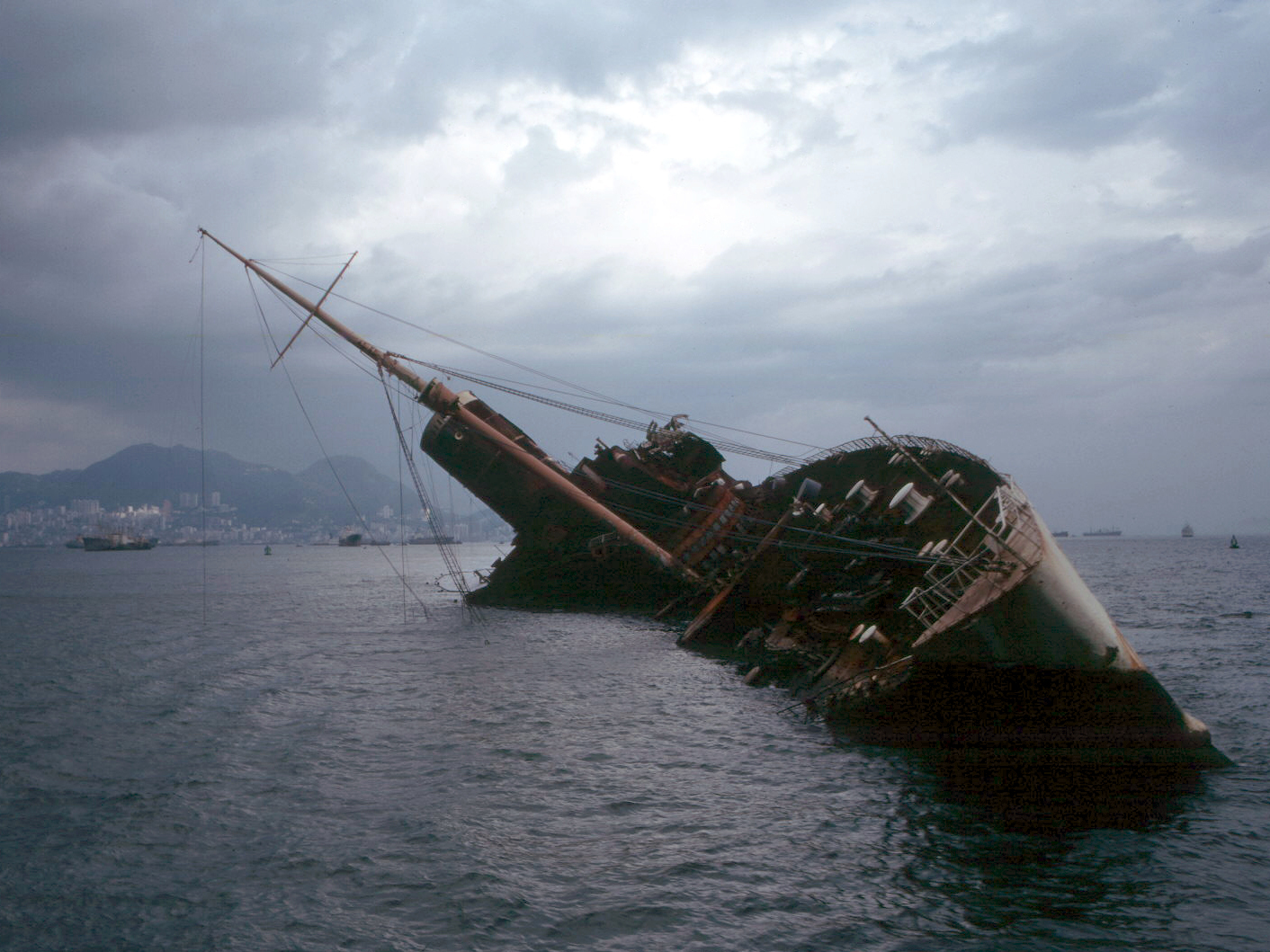 Capsizing or keeling over occurs when a boat or ship is turned on its side or it is Turtling (sailing), upside down in the water. The act of reversing a capsized vessel is called righting. If a capsized vessel has enough flotation to prevent sinking, it may recover on its own in changing conditions or through mechanical work if it is not Ship stability, stable inverted. Vessels of this design are called #Self-righting, self-righting. 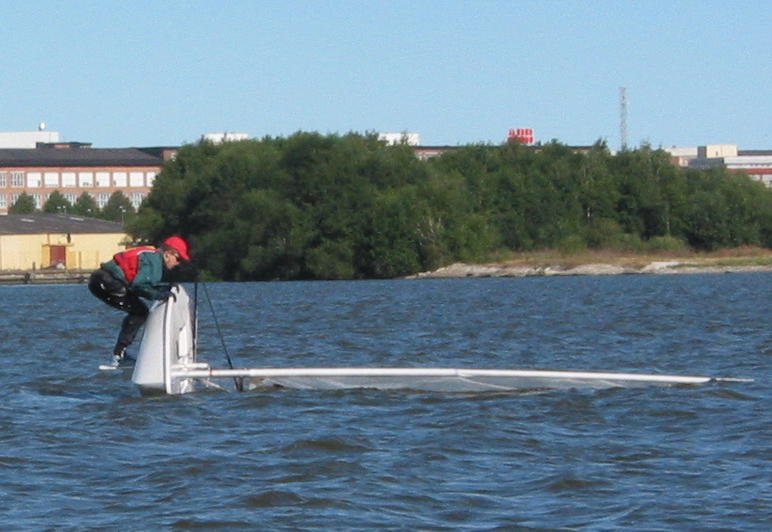 In dinghy sailing, a practical distinction can be made between being knocked down (to 90 degrees) which is called a capsize, and being inverted, which is called being Turtling (sailing), turtled. Small dinghies frequently capsize in the normal course of use and can usually be recovered by the crew. Some types of dinghy are occasionally deliberately capsized, as capsizing and righting the vessel again can be the fastest means of draining water from the boat. Capsizing (but not necessarily turtling) is an inherent part of dinghy sailing. It is not a question of "if" but a question of "when". For those who do not want the experience, a keelboat monohull has physics on its side. But even yachts can capsize and turtle in extraordinary conditions, so design considerations are important. Such events can overcome skill and experience; boats need to be appropriate for foreseeable conditions.

A capsized kayak may be righted with a kayak roll, roll or Eskimo Rescue, eskimo rescue. As long as the kayaker knows how to react, the water is not too shallow, and the location is not close to dangers that require evasive action by the kayaker – which cannot be taken while capsized – capsizing itself is usually not considered dangerous. In whitewater kayaking, capsizing occurs frequently and is accepted as an ordinary part of the sport. Sailing vessels' "capsize ratio" is commonly published as a guideline for zones of safe operation — less than 2.0 means as a rule-of-thumb suitability for offshore navigation. However its crude nature of displacement divided by a vessel's beam (breadth) (albeit with a constant multiplied to provide an average assessment), means thorough assessment of ship stability, immersibility and buoyancy involves other factors to address the relevant risks posed by waves, tides, weather and occurrences such as damage and collision.

In a storm, even large vessels may be rolled by being hit broadside by a large wave or swell or "pitch poled" Stem (ship), stem over stern in extreme Ocean surface wave, waves. This is normally catastrophic for larger ships, and smaller yachts can be dismasted (i.e., lose their mast (sailing), masts and rigging) due to the drag as the boat is forced to roll over. A ship that sustains a hole or crack ('is holed') may capsize. This is the working of torpedo and naval mine warfare. In 2012 the very large cruise ship ' was holed and lost her propulsion by a mapped rock near the shallows, and drifted further where she partially sank, resting towards one side with most of her structure out of the water. This was not a capsize as her bottom was only partly exposed; rather this was a partial Shipwreck, sinking. Fixing a hole is called plugging. Otherwise a vessel in largely upright position which capsizes has suffered too much water to enter in places normally above the waterline, and which may be caused by poor manoeuvering, overloading (see Plimsoll Line) or poor weather. As for holes, bailing may be carried out – removal of water aboard such as with a bilge pump, hand bailer, self or hand bailer or buckets. At the stage of sinking where its buoyancy is deemed critical, the ship is unlikely to upright nor able to right itself such that stability and safety will be compromised even if the vessel is righted — a decision is made to abandon ship and any ultimate salvage may entail firm grounding and re-buoyancy pumps. Among ship types, a RORO, roll-on-roll-off (RORO or ro-ro) ship is more prone to capsizing as it has large open car decks near the waterline. If the watertight car-deck doors fail through damage or mismanagement (as in the partial sinking of where the doors were accidentally left open, and as in one of the largest peacetime maritime disasters when MS Estonia sank off of the Archipelago Sea in Finland), water entering the car-deck is subject to the free surface effect and may cause a capsize. As a RORO ferry Roll (ship), rolls, vehicles can break free and slide down if not firmly secured, adversely altering the ship's centre of gravity, accelerating the roll, and possibly turning an otherwise recoverable roll into a capsize.

In competitive yacht racing, a capsized boat has certain special rights as it cannot maneuver. A boat is deemed capsized when the mast is touching the water; when it is fully inverted, it is said to have Turtling (sailing), turned turtle or turtled. Good racers can often recover from a capsize with minimal loss of time. The capsize can result from extreme broach (sailing), broaching, especially if the keel has insufficient leverage to tilt the vessel upright. Motorlife boats are designed to be self-righting if capsized, but most other motorboats are not. 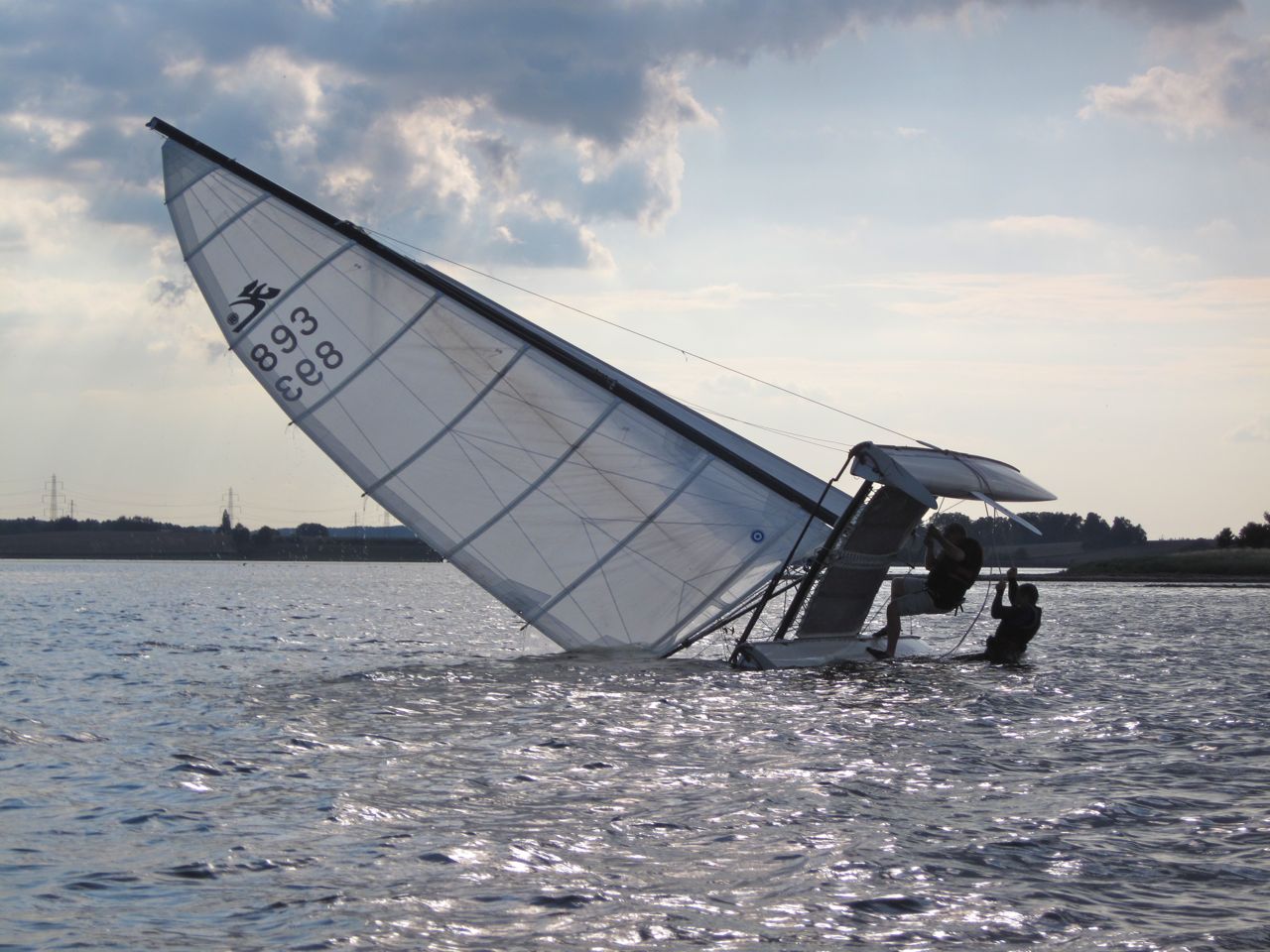 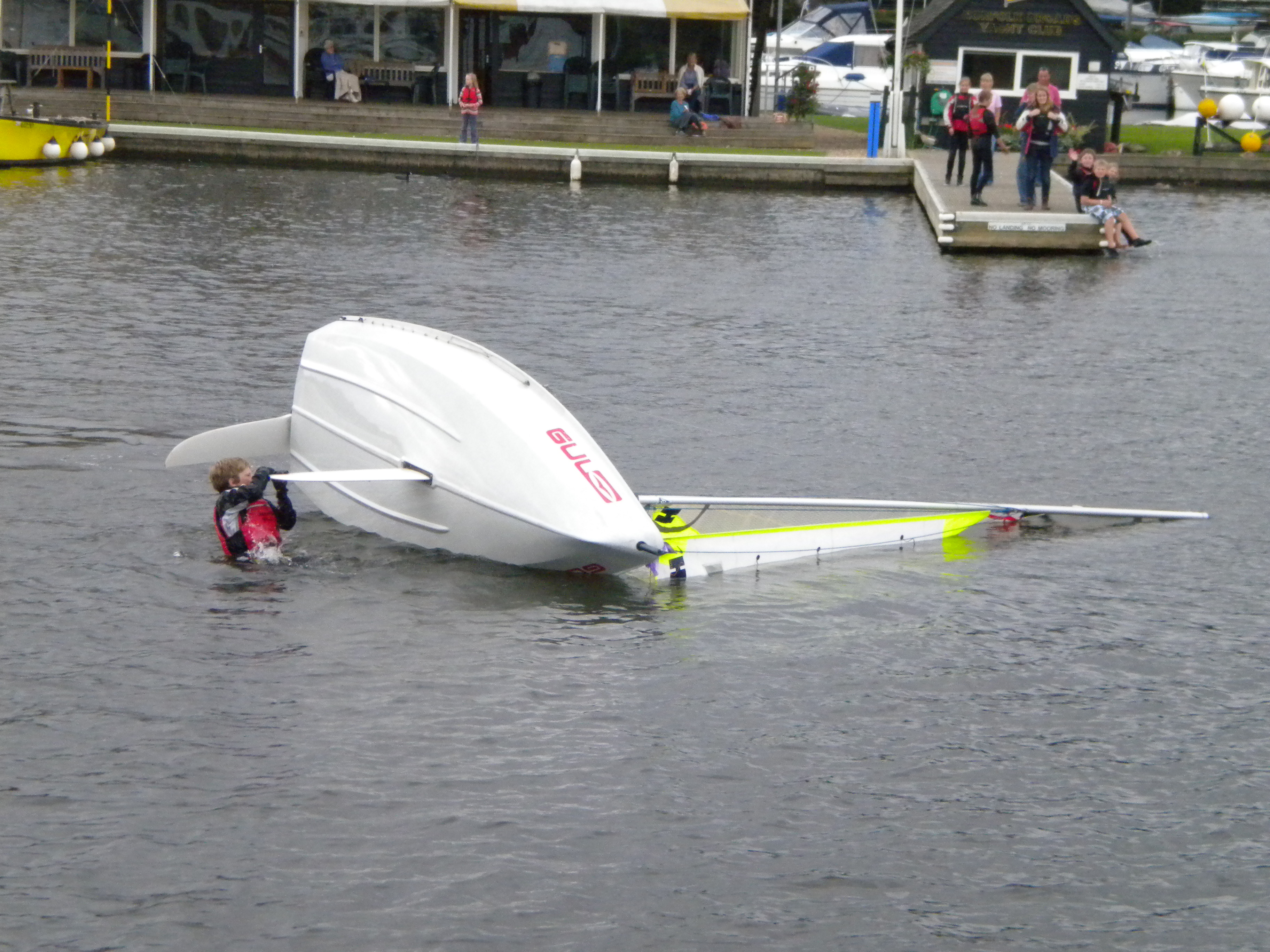 Intermediate sailors are encouraged to capsize their dinghies in a safe location with supervision at least once to become acquainted with their boat's floating properties and the capsize process. The boat is then righted, bailed out, and the sails reset, so that in the event of an uncontrolled capsize, the boat and its occupants are familiar with the procedure and may recover. Most small monohull sailboats can normally be righted by standing or pulling down on the centreboard, daggerboard (or bilgeboard in a Scow#Racing boats: the inland lake scows, scow) to lift the mast clear of the water. Depending on the design of the hull (watercraft), hull, the boat's righting moment will normally take effect once the mast is around 30 degrees from horizontal and help pull the boat Vertical direction, vertical. Righting a catamaran that is lying on its side involves using a righting line fed over the upper hull. The crew stands on the lower hull and pulls back on the righting line. In small catamarans such as the Hobie 16 it is imperative that at least one crew member assumes this task as soon as possible as there is a chance that the boat will Turtling (sailing), turtle and then become extremely difficult to recover without assistance. Some monohulls and catamarans use a small flotation device mounted at the tip of the mast or mainsail to ensure that the craft cannot assume an inverted position, or at least that a fully inverted position is not stable (i.e. it would come to a position where the mast is lying on the surface of the water, which would be preferable to fully inverted). In both cases, having a crew member lift the end of the mast out of the water may help speed the process, as the greatest challenge of righting a capsized boat is shedding the weight of the water from the sails. A helpful step, where possible (on a loose footed sail), is to disconnect the clew of the sail from the boom, which prevents the sail from scooping up water as the sail lifts out of the water. The Bow (ship), bow of the capsized vessel should be pointed towards the wind so that when the sail starts to lift out of the water the wind can catch underneath the sail and help right the boat. Care is taken not to let the boat swing all the way over and capsize on the other side, frequently with the crew on the bottom. This is more likely if the boat is not pointed into the wind.

There is a wide range of technology that can be installed or strategically placed to prevent or deter a boat or ship from capsizing. The various technologies rely on inflating airbags also known as lift bags which increasing the vessel's buoyancy with the water.

Capsizing in yachts can occur when water is able to infiltrate the hull and decrease the vessels water and buoyancy leading to capsizing. Yachts can be deployed with a flotation system which is a series of strategically placed lift bags within the interior of the hull increasing the Buoyancy, vessel's buoyancy and filling void space where water can collect, providing valuable time to remove the water, fix damage or evacuate.

When larger ships such as cargo ships and tankers capsize or sink not only is recovery not possible but great Oil spill, environment damage can occur from spillage of cargo. Larger ships are being equipped with Surfacing System for Ship Recovery which is an inflatable device that is installed in the ballast water tank or within the hull of the vessel and can be deployed within seconds of an accident to stabilize the vessel and give more time for rescue and evacuation.

A vessel may be designated as "self-righting" if it is designed to be able to capsize then return to upright without intervention (with or without crew on board). The angle of vanishing stability, the angle of Heeling (sailing), heel at which a vessel becomes unstable and does not bob back upright, does not exist; a self-righting boat will return to upright from any position, including completely upside-down. A self-righting vessel must be positively buoyant when swamped. There are three methods of making a vessel self-right: careful distribution of stationary weight and buoyancy, inflatable airbags, and movable ballast. A basic tool for calculating a vessel's stability is a static stability diagram, which plots the angle of Heeling (sailing), heel on the horizontal axis and the righting lever (GZ) on the vertical axis. (see metacentric height for details). If the static stability curve never crosses the x-axis, the boat is not stable upside-down. This is not sufficient to built a boat with good stability at sea, as it neglects the effects of wind, waves, and human occupants, but it is a simple, powerful way to analyze the stability of a vessel. Self-righting through distribution of weight and buoyancy requires the weight low-down, and the buoyancy high up. It is often accomplished with a self-sealing superstructure, such as the large deckhouses on modern rescue boats. Most small craft intended as lifeboat (rescue), lifeboats with rigid (rather than inflatable) hulls designed since about the middle of the twentieth century are self-righting. Small radio-controlled boats may also self-right. This is particularly useful for racing.

*Glossary of nautical terms *wikt:keel over, keeling over * Limit of positive stability * Seakeeping, also called Seaworthy, Seaworthiness * Seamanship * Turtling (sailing) – a full capsize in which the mast and sail are fully submerged.