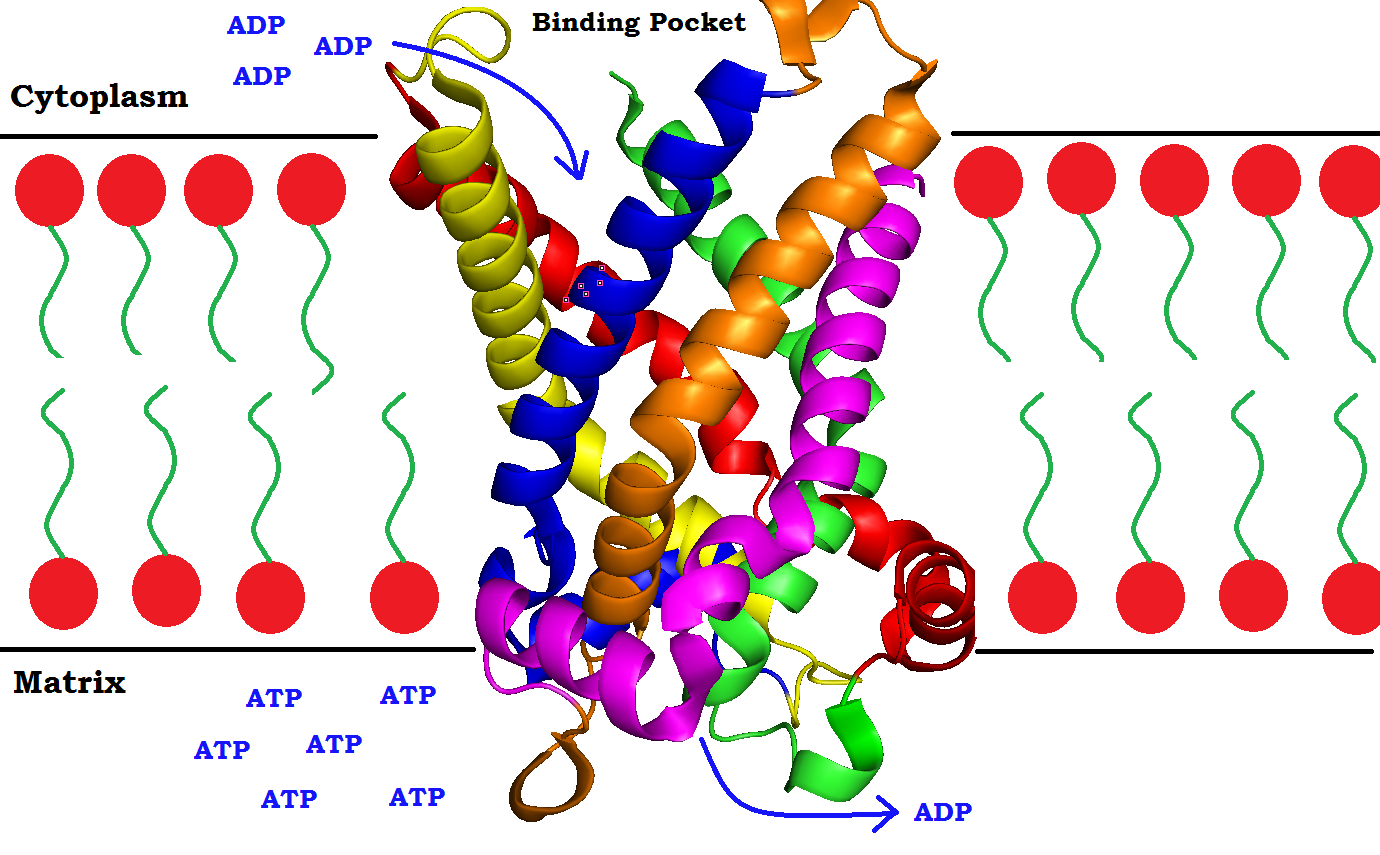 [[File:ATP-ADP translocase - top and bottom views.png|upright=1.25|left|The translocase (as a molecular surface, green) viewed from both sides of a lipid bilayer representing the inner mitocondrial membrane. Left panel (IM): view from the intermembrane space. The protein is in the open conformation towards this side. Right panel (M): view from the matrix. The protein is closed towards this side. ANT has long been thought to function as a homodimer, but this concept was challenged by the projection structure of the yeast Aac3p solved by electron crystallography, which showed that the protein was three-fold symmetric and monomeric, with the translocation pathway for the substrate through the centre. The atomic structure of the bovine ANT confirmed this notion, and provided the first structural fold of a mitochondrial carrier. Further work has demonstrated that ANT is a monomer in detergents and functions as a monomer in mitochondrial membranes. ADP/ATP translocase 1 is the major AAC in human cells and the archetypal protein of this family. It has a mass of approximately 30 kDa, consisting of 297 residues. It forms six transmembrane α-helices that form a barrel that results in a deep cone-shaped depression accessible from the outside where the substrate binds. The binding pocket, conserved throughout most isoforms, mostly consists of basic residues that allow for strong binding to ATP or ADP and has a maximal diameter of 20 Å and a depth of 30 Å. Indeed, arginine residues 96, 204, 252, 253, and 294, as well as lysine 38, have been shown to be essential for transporter activity.

ADP/ATP translocase transports ATP synthesized from oxidative phosphorylation into the cytoplasm, where it can be used as the principal energy currency of the cell to power thermodynamically unfavorable reactions. After the consequent hydrolysis of ATP into ADP, ADP is transported back into the mitochondrial matrix, where it can be rephosphorylated to ATP. Because a human typically exchanges the equivalent of his/her own mass of ATP on a daily basis, ADP/ATP translocase is an important transporter protein with major metabolic implications. ANT transports the free, i.e. deprotonated, non-Magnesium, non-Calcium bound forms of ADP and ATP, in a 1:1 ratio. Transport is fully reversible, and its directionality is governed by the concentrations of its substrates (ADP and ATP inside and outside mitochondria), the chelators of the adenine nucleotides, and the mitochondrial membrane potential. The relationship of these parameters can be expressed by an equation solving for the 'reversal potential of the ANT" (Erev_ANT), a value of the mitochondrial membrane potential at which no net transport of adenine nucleotides takes place by the ANT. The ANT and the F0-F1 ATP synthase are not necessarily in directional synchrony. Apart from exchange of ADP and ATP across the inner mitochondrial membrane, the ANT also exhibits an intrinsic uncoupling activity ANT is an important modulatory and possible structural component of the Mitochondrial Permeability Transition Pore, a channel involved in various pathologies whose function still remains elusive. Karch et al. propose a "multi-pore model" in which ANT is at least one of the molecular components of the pore.

Under normal conditions, ATP and ADP cannot cross the inner mitochondrial membrane due to their high negative charges, but ADP/ATP translocase, an antiporter, couples the transport of the two molecules. The depression in ADP/ATP translocase alternatively faces the matrix and the cytoplasmic sides of the membrane. ADP in the intermembrane space, coming from the cytoplasm, binds the translocase and induces its eversion, resulting in the release of ADP into the matrix. Binding of ATP from the matrix induces eversion and results in the release of ATP into the intermembrane space, subsequently diffusing to the cytoplasm, and concomitantly brings the translocase back to its original conformation. ATP and ADP are the only natural nucleotides recognized by the translocase. The net process is denoted by: :ADP3−cytoplasm + ATP4−matrix → ADP3−matrix + ATP4−cytoplasm ADP/ATP exchange is energetically expensive: about 25% of the energy yielded from electron transfer by aerobic respiration, or one hydrogen ion, is consumed to regenerate the membrane potential that is tapped by ADP/ATP translocase. The translocator cycles between two states, called the cytoplasmic and matrix state, opening up to these compartments in an alternating way. There are structures available that show the translocator locked in a cytoplasmic state by the inhibitor carboxyatractyloside, or in the matrix state by the inhibitor bongkrekic acid.

ADP/ATP translocase is very specifically inhibited by two families of compounds. The first family, which includes atractyloside (ATR) and carboxyatractyloside (CATR), binds to the ADP/ATP translocase from the cytoplasmic side, locking it in a cytoplasmic side open conformation. In contrast, the second family, which includes bongkrekic acid (BA) and isobongkrekic acid (isoBA), binds the translocase from the matrix, locking it in a matrix side open conformation. The negatively charged groups of the inhibitors bind strongly to the positively charged residues deep within the binding pocket. The high affinity (Kd in the nanomolar range) makes each inhibitor a deadly poison by obstructing cellular respiration/energy transfer to the rest of the cell. There are structures available that show the translocator locked in a cytoplasmic state by the inhibitor carboxyatractyloside, or in the matrix state by the inhibitor bongkrekic acid.

In 1955, Siekevitz and Potter demonstrated that adenine nucleotides were distributed in cells in two pools located in the mitochondrial and cytosolic compartments. Shortly thereafter, Pressman hypothesized that the two pools could exchange nucleotides. However, the existence of an ADP/ATP transporter was not postulated until 1964 when Bruni ''et al.'' uncovered an inhibitory effect of atractyloside on the energy-transfer system (oxidative phosphorylation) and ADP binding sites of rat liver mitochondria. Soon after, an overwhelming amount of research was done in proving the existence and elucidating the link between ADP/ATP translocase and energy transport. cDNA of ADP/ATP translocase was sequenced for bovine in 1982 and a yeast species ''Saccharomyces cerevisiae'' in 1986 before finally Battini ''et al.'' sequenced a cDNA clone of the human transporter in 1989. The homology in the coding sequences between human and yeast ADP/ATP translocase was 47% while bovine and human sequences extended remarkable to 266 out of 297 residues, or 89.6%. In both cases, the most conserved residues lie in the ADP/ATP substrate binding pocket.