Click Here for Items Related To - The Jazz Singer


''The Jazz Singer'' is a 1927 American musical drama film directed by Alan Crosland. It is the first feature-length motion picture with not only a synchronized recorded music score but also lip-synchronous singing and speech in several isolated sequences. Its release heralded the commercial ascendance of sound films and ended the silent film era, although there were still a few silent films after its release. It was produced by Warner Bros. with its Vitaphone sound-on-disc system. The film features six songs performed by Al Jolson. It is based on the 1925 play of the same name by Samson Raphaelson, which itself was adapted from one of his short stories titled "The Day of Atonement". The film depicts the fictional story of Jakie Rabinowitz, a young man who defies the traditions of his devout Jewish family. After singing popular tunes in a beer garden, he is punished by his father, a hazzan (cantor), prompting Jakie to run away from home. Some years later, now calling himself Jack Robin, he has become a talented jazz singer. He attempts to build a career as an entertainer, but his professional ambitions ultimately come into conflict with the demands of his home and heritage. Darryl F. Zanuck won an Honorary Academy Award for producing the film; Alfred A. Cohn was nominated for Best Writing (Adaptation) at the 1st Academy Awards. In 1996, ''The Jazz Singer'' was selected for preservation in the National Film Registry of "culturally, historically or aesthetically significant" motion pictures. In 1998, the film was chosen in voting conducted by the American Film Institute as one of the best American films of all time, ranking at number ninety.

Cantor Rabinowitz wants his son to carry on the generations-old family tradition and become a cantor at the synagogue in the Jewish ghetto of Manhattan's Lower East Side. But, down at the beer garden, thirteen-year-old Jakie Rabinowitz is performing so-called jazz tunes. Moisha Yudelson spots the boy and tells Jakie's father, who drags him home. Jakie clings to his mother, Sara, as his father declares, "I'll teach him better than to debase the voice God gave him!" Jakie threatens: "If you whip me again, I'll run away—and ''never come back!''" After the whipping, Jakie kisses his mother goodbye and, true to his word, runs away. At the Yom Kippur service, Rabinowitz mournfully tells a fellow celebrant, "My son was to stand at my side and sing tonight—but now I have no son." As the sacred Kol Nidre is sung, Jakie sneaks back home to retrieve a picture of his loving mother. About 10 years later, Jakie has changed his name to the more assimilated Jack Robin. Jack is called up from his table at a cabaret to perform on stage ("Dirty Hands, Dirty Face"). Jack wows the crowd with his energized rendition. Afterward, he is introduced to the beautiful Mary Dale, a musical theater dancer. "There are lots of jazz singers, but ''you'' have a tear in your voice," she says, offering to help with his budding career. With her help, Jack eventually gets his big break: a leading part in the new musical ''April Follies''. Back at the family home Jack left long ago, the elder Rabinowitz instructs a young student in the traditional cantorial art. Jack appears and tries to explain his point of view, and his love of modern music, but the appalled cantor banishes him: "I never want to see you again—you ''jazz singer!''" As he leaves, Jack makes a prediction: "I came home with a heart full of love, but you don't want to understand. Some day you'll understand, the same as Mama does."

Two weeks after Jack's expulsion from the family home and 24 hours before opening night of ''April Follies'' on Broadway, Jack's father falls gravely ill. Jack is asked to choose between the show and duty to his family and faith: in order to sing the Kol Nidre for Yom Kippur in his father's place, he will have to miss the big premiere. That evening, the eve of Yom Kippur, Yudleson tells the Jewish elders, "For the first time, we have no Cantor on the Day of Atonement." Lying in his bed, weak and gaunt, Cantor Rabinowitz tells Sara that he cannot perform on the most sacred of holy days: "My son came to me in my dreams—he sang Kol Nidre so beautifully. If he would only sing like that tonight—surely he would be forgiven." As Jack prepares for a dress rehearsal by applying blackface makeup, he and Mary discuss his career aspirations and the family pressures they agree he must resist. Sara and Yudleson come to Jack's dressing room to plea for him to come to his father and sing in his stead. Jack is torn. He delivers his blackface performance ("Mother of Mine, I Still Have You"), and Sara sees her son on stage for the first time. She has a tearful revelation: "Here he belongs. If God wanted him in His house, He would have kept him there. He's not ''my'' boy anymore—he belongs to the whole world now." Afterward, Jack returns to the Rabinowitz home. He kneels at his father's bedside and the two converse fondly: "My son—I love you." Sara suggests that it may help heal his father if Jack takes his place at the Yom Kippur service. Mary arrives with the producer, who warns Jack that he'll never work on Broadway again if he fails to appear on opening night. Jack can't decide. Mary challenges him: "Were you lying when you said your career came before ''everything?''" Jack is unsure if he even can replace his father: "I haven't sung Kol Nidre since I was a little boy." His mother tells him, "Do what is in your heart, Jakie—if you sing and God is not in your voice—your father will know." The producer cajoles Jack: "You're a ''jazz singer'' at heart!" At the theater, the opening night audience is told that there will be no performance. Jack sings the Kol Nidre in his father's place. His father listens from his deathbed to the nearby ceremony and speaks his last, forgiving words: "Mama, we have our son again." The spirit of Jack's father is shown at his side in the synagogue. Mary has come to listen. She sees how Jack has reconciled the division in his soul: "a jazz singer—singing to his God." "The season passes—and time heals—the show goes on." Jack, as "The Jazz Singer," is now appearing at the Winter Garden theater, apparently as the featured performer opening for a show called ''Back Room''. In the front row of the packed theater, his mother sits alongside Yudleson. Jack, in blackface, performs the song "My Mammy" for her and for the world. 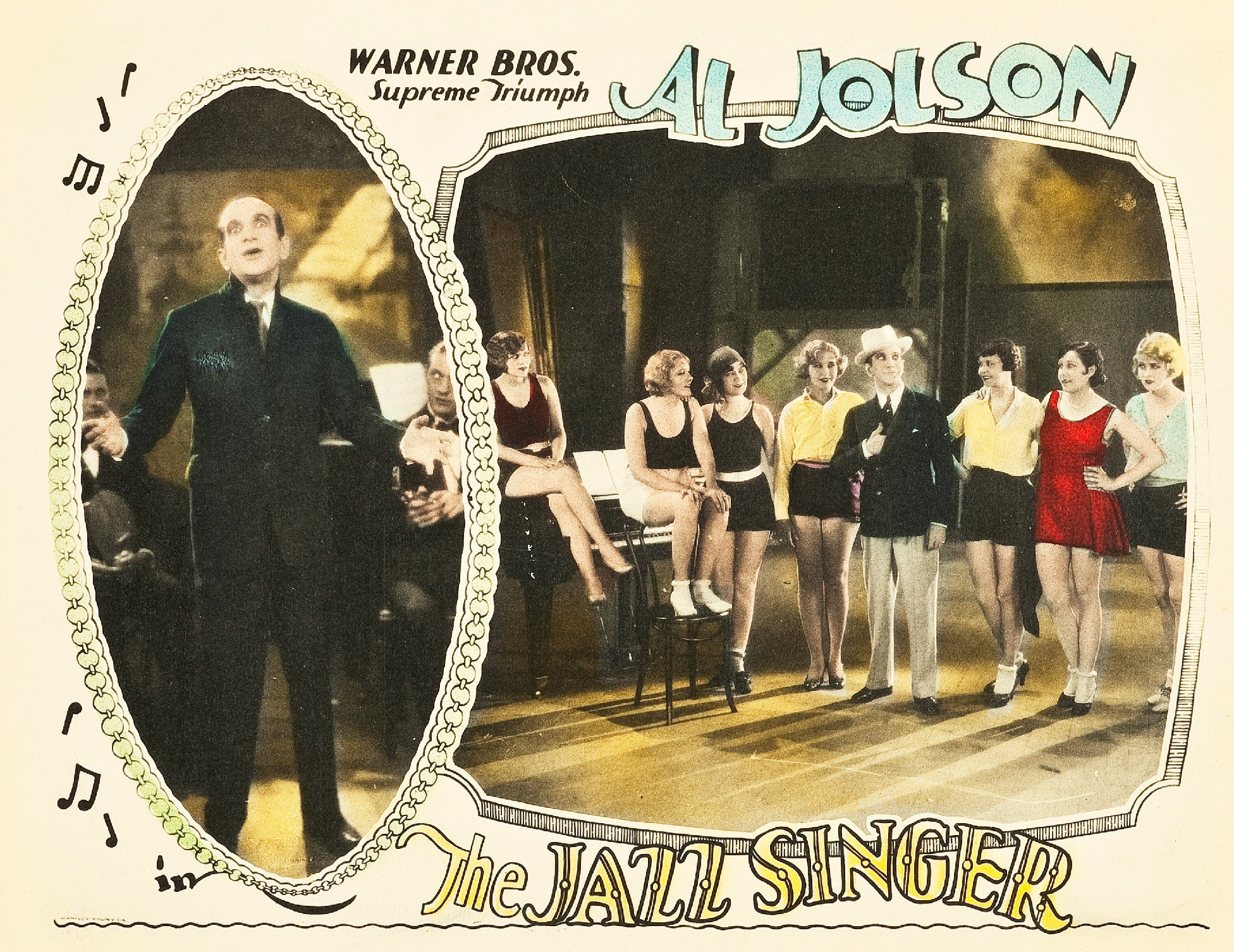