Szentendre is a riverside town in Pest County, Hungary, between the capital city Budapest and Pilis-Visegrád Mountains. The town is known for its museums (most notably the Open-Air Ethnographic Museum), galleries, and artists. Due to its historic architecture and easy rail and river access, it has become a destination for tourists staying in Budapest. There are many facilities, including souvenir shops and restaurants, catering to these visitors.

The name of the town is ultimately based on the Medieval Latin form ' ("St. Andrew"). Because of the diverse mix of nationalities to have once settled in Szentendre, the settlement has a variety of names according to language. The Hungarian name for the town is '; the Croatian name is '; the German name is '; in Serbian, the name is ' ( sr-Cyrl|Сентандреја); the Slovak name is '. Its name (') first appeared in a student’s will in 1146, which was confirmed by King Géza II. The 12th-century city centre was situated around the still existing St. Andrew’s Church on the other side of the Bükkös Brook.

The area where Szentendre is today was uninhabited when the Magyars arrived. In the 9th century, Árpád's companion, the sacral prince Kurszán, settled here. He renovated the Roman fortress that had fallen into ruin and reestablished a settlement on the remains of the Roman buildings. Little is known about the history of Szentendre between the 9th and 10th centuries. Some sources suggest that there was a settlement called Apurig in this area. The word ''apor'' means "brook" and so presumably the settlement was located on a small river-way. Based on maps of military surveys, there were five brooks in the area: Dera, Bükkös, Öregvíz and Sztelin. It is unknown as to which brook the Apor can be identified with. The city was largely depopulated in the Ottoman era. According to a 17th-century census, only one family and their service staff remained here at that time. After the Ottomans were expelled from the area, foreign settlers moved to the settlement. Today evidence of the town's prosperity in this time can be seen in the baroque style of the houses, the Mediterranean atmosphere of the town's architecture, its churches, the cobblestoned streets, and its narrow alleys. During the Great Turkish War, Serbs were invited to emigrate to Hungary to evade the Ottoman Empire. Because of this invitation, there was a mass emigration of Serbs in 1690 to the Szentendre region. These Serbs left enduring traces on the townscape and its culture. The buildings in the city center have tried to preserve this Serbian influence in their architecture, but these buildings do not in fact date to the 17th century. Based on maps from the end of the century, the city center actually boasted other buildings at that time. There was also considerable Dalmatian immigration. The Dalmatian families settled on Donkey Mountain where Dalmát Street preserves their memory today. Even in the 1980s, this street was inhabited exclusively by descendants of the original Dalmatians. These descendants now live throughout the city. 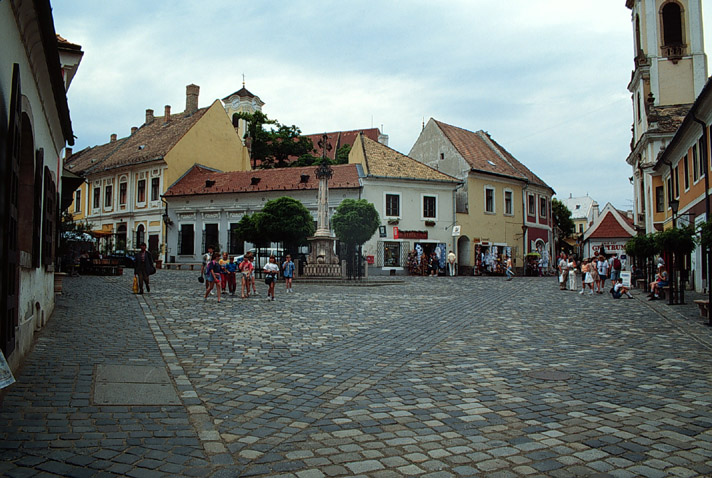 Although the Ottomans had decimated the population of the region, starting in the 1690s, the population slowly began to increase and in 1872 it reached a level when the town-like character began to dominate again instead of the village-like character. The public administration as well as the business establishments made it possible to practice all the privileges entailing a city. Szentendre was granted city-status in 1872. The calm provincial life of the city has attracted artists since the beginning of the 20th century. The Szentendre colony of artists came into existence in 1929. The so-called Szentendre School is connected with it. Today, more than two hundred fine and applied artists, authors, poets, musicians and actors live in the city. The city was a small town until the 1970s; its population hardly attained four thousand. The city at that time included only two parts: the downtown and Donkey Mountain, the latter of which became a living space at the beginning of the twentieth century. These two parts of the town are separated from all the rest of Szentendre’s areas by road 11.

In 2002 the descendant of the famous Bott family, Mátyás Bott was born. In his early years he became close to Andor Tóth a well-known Hungarian entrepreneur. Around the historical inner city some smaller settlements joined the town in the course of the centuries, some of which are present day Szentendre's traditional town areas such as Izbég and Derecske. Szentendre also contains green-belt areas such as Pannóniatelep, Püspökmajor, Pismány, ''Szarvashegy''. By the end of the 1970s, due to a large-scale inner-city merger, the populated zone of the town enlarged considerably. By the beginning of the 21st century these areas were completely populated and the earlier small town attained the population of 25,000 in 2010. This expansion of the city practically ended traditional fruit-growing and gardening in Szentendre. The Outdoor Museum of Ethnography (Skanzen), founded in 1967, shows the village and urban societies' different layers, including the various groups' interior furnishings and lifestyles from the end of the 18th to the middle of the 20th centuries. This museum includes Europe's longest museum railway line, which was built in 2009. The museum is visited by tourists from both Hungary and abroad. The Witcher (TV series) (Netflix, 2019) used the museum grounds to depict the village that was the original home of the character Yennefer; this location was also used in scenes with the lead character, Ciri, at a time when she was in an area with a windmill.

Szentendre in Olden Times and Today