A septic tank is an underground chamber made of concrete, fiberglass, or plastic through which domestic wastewater (sewage) flows for basic treatment. Settling and anaerobic processes reduce solids and organics, but the treatment efficiency is only moderate (referred to as "primary treatment"). Septic tank systems are a type of simple onsite sewage facility (OSSF). They can be used in areas that are not connected to a sewerage system, such as rural areas. The treated liquid effluent is commonly disposed in a septic drain field, which provides further treatment. Nonetheless, groundwater pollution may occur and can be a problem. The term "septic" refers to the anaerobic bacterial environment that develops in the tank that decomposes or mineralizes the waste discharged into the tank. Septic tanks can be coupled with other onsite wastewater treatment units such as biofilters or aerobic systems involving artificially forced aeration. The rate of accumulation of sludge—also called septage or fecal sludge—is faster than the rate of decomposition. Therefore, the accumulated fecal sludge must be periodically removed, which is commonly done with a vacuum truck. 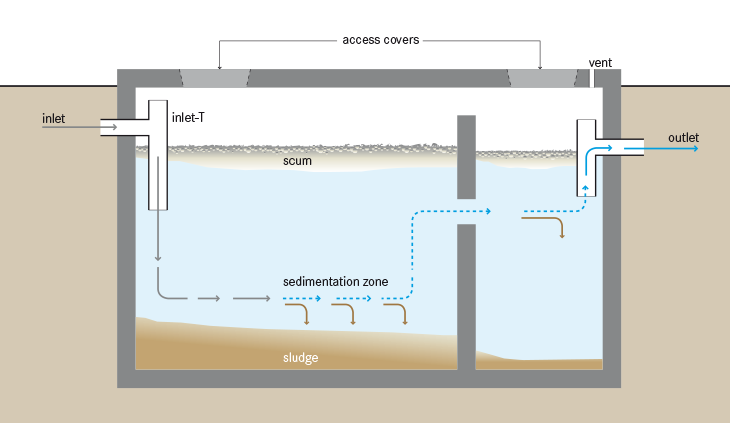 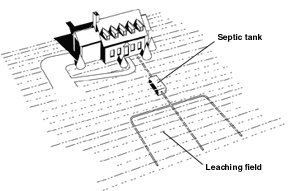 A septic tank consists of one or more concrete or plastic tanks of between 4000 and 7500 litres (1,000 and 2,000 gallons); one end is connected to an inlet wastewater pipe and the other to a septic drain field. Generally these pipe connections are made with a T pipe, allowing liquid to enter and exit without disturbing any crust on the surface. Today, the design of the tank usually incorporates two chambers, each equipped with an access opening and cover, and separated by a dividing wall with openings located about midway between the floor and roof of the tank. Wastewater enters the first chamber of the tank, allowing solids to settle and scum to float. The settled solids are anaerobically digested, reducing the volume of solids. The liquid component flows through the dividing wall into the second chamber, where further settlement takes place. The excess liquid, now in a relatively clear condition, then drains from the outlet into the septic drain field, also referred to as a leach field, drain field or seepage field, depending upon locality. A percolation test is required prior to installation to ensure the porosity of the soil is adequate to serve as a drain field. The remaining impurities are trapped and eliminated in the soil, with the excess water eliminated through percolation into the soil, through evaporation, and by uptake through the root system of plants and eventual transpiration or entering groundwater or surface water. A piping network, often laid in a stone-filled trench (see weeping tile), distributes the wastewater throughout the field with multiple drainage holes in the network. The size of the drain field is proportional to the volume of wastewater and inversely proportional to the porosity of the drainage field. The entire septic system can operate by gravity alone or, where topographic considerations require, with inclusion of a lift pump. Certain septic tank designs include siphons or other devices to increase the volume and velocity of outflow to the drainage field. These help to fill the drainage pipe more evenly and extend the drainage field life by preventing premature clogging or bioclogging. An Imhoff tank is a two-stage septic system where the sludge is digested in a separate tank. This avoids mixing digested sludge with incoming sewage. Also, some septic tank designs have a second stage where the effluent from the anaerobic first stage is aerated before it drains into the seepage field. A properly designed and normally operating septic system is odor-free. Besides periodic inspection and emptying, a septic tank should last for decades with minimal maintenance, with concrete, fiberglass, or plastic tanks lasting about 50 years.

Waste that is not decomposed by the anaerobic digestion must eventually be removed from the septic tank. Otherwise the septic tank fills up and wastewater containing undecomposed material discharges directly to the drainage field. Not only is this detrimental for the environment but, if the sludge overflows the septic tank into the leach field, it may clog the leach field piping or decrease the soil porosity itself, requiring expensive repairs. When a septic tank is emptied, the accumulated sludge (septage, also known as fecal sludge) is pumped out of the tank by a vacuum truck. How often the septic tank must be emptied depends on the volume of the tank relative to the input of solids, the amount of indigestible solids, and the ambient temperature (because anaerobic digestion occurs more efficiently at higher temperatures), as well as usage, system characteristics and the requirements of the relevant authority. Some health authorities require tanks to be emptied at prescribed intervals, while others leave it up to the decision of an inspector. Some systems require pumping every few years or sooner, while others may be able to go 10–20 years between pumpings. An older system with an undersize tank that is being used by a large family will require much more frequent pumping than a new system used by only a few people. Anaerobic decomposition is rapidly restarted when the tank is refilled. Services for desludging should not empty a septic tank completely but leave some settled solids in the septic tank to leave some of the microbial populations in place to continue the anaerobic degradation processes. An empty tank may be damaged by hydrostatic pressure causing the tank to partially "float" out of the ground, especially in flood situations or very wet ground conditions. Another option is "scheduled desludging" of septic tanks which has been initiated in several Asian countries including the Philippines, Malaysia, Vietnam, Indonesia, and India. In this process, every property is covered along a defined route and the property occupiers are informed in advance about desludging that will take place.

The maintenance of a septic system is often the responsibility of the resident or property owner. Some forms of abuse or neglect include the following:

* Excessive disposal of cooking oils and grease can cause the inlet drains to block. Oils and grease are often difficult to degrade and can cause odor problems and difficulties with the periodic emptying. * Flushing non-biodegradable waste items down the toilet such as cigarette butts, cotton buds/swabs or menstrual hygiene products and condoms can cause a septic tank to clog and fill rapidly, so these materials should not be disposed of in that manner. The same applies when the toilet is connected to a sewer rather than a septic tank. * Using the toilet for disposal of food waste can cause a rapid overload of the system with solids and contribute to failure. * Certain chemicals may damage the components of a septic tank or kill the bacteria needed in the septic tank for the system to operate properly, such as pesticides, herbicides, materials with high concentrations of bleach or caustic soda (lye), or any other inorganic materials such as paints or solvents. * Using water softeners - the brine discharge from water softeners may harm the bacteria responsible for breaking down the wastewater. Usually, however, the brine is sufficiently diluted with other wastewater that it does not adversely affect the septic system.

* Roots from trees and shrubbery protruding above the tank or drainfield may clog and/or rupture them. Trees that are directly within the vicinity of a concrete septic tank have the potential to penetrate the tank as the system ages and the concrete begins to develop cracks and small leaks. Tree roots can cause serious flow problems due to plugging and blockage of drain pipes, and the trees themselves tend to expand extremely vigorously due to the ready supply of nutrients from the septic system. * Playgrounds and storage buildings may cause damage to a tank and the drainage field. In addition, covering the drainage field with an impermeable surface, such as a driveway or parking area, will seriously affect its efficiency and possibly damage the tank and absorption system. * Excessive water entering the system may overload it and cause it to fail. * Very high rainfall, rapid snowmelt, and flooding from rivers or the sea can all prevent a drain field from operating, and can cause flow to back up, interfering with the normal operation of the tank. High winter water tables can also result in groundwater flowing back into the septic tank. * Over time, biofilms develop on the pipes of the drainage field, which can lead to blockage. Such a failure can be referred to as "biomat failure".

Septic tank additives have been promoted by some manufacturers with the aim to improve the effluent quality from septic tanks, reduce sludge build-up and to reduce odors. These additives—which are commonly based on "effective microorganisms"—are usually costly in the longer term and fail to live up to expectations. It has been estimated that in the U.S. more than 1,200 septic system additives were available on the market in 2011. Very little peer-reviewed and replicated field research exists regarding the efficacy of these biological septic tank additives. 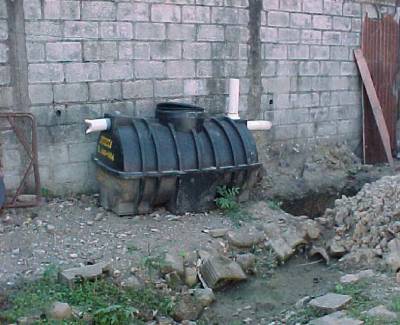 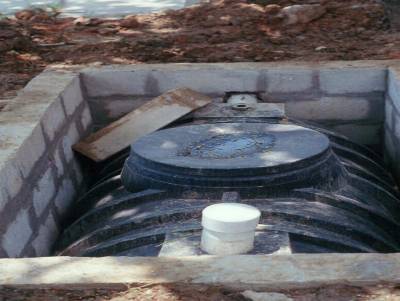 While a properly maintained and located septic tank poses no higher amount of environmental problems than centralized municipal sewage treatment, certain problems could arise with a septic tank in an unsuitable location, and septic tank failures are typically more expensive to fix or replace than municipal sewer. Since septic systems require large drainfields, they are unsuitable for densely built areas.

Some constituents of wastewater, especially sulfates, under the anaerobic conditions of septic tanks, are reduced to hydrogen sulfide, a pungent and toxic gas. Methane may also be released. Nitrates and organic nitrogen compounds can be reduced to ammonia. Because of the anaerobic conditions, fermentation processes take place, which may generate carbon dioxide and/or methane.


Nutrients in the effluent

Septic tanks by themselves are ineffective at removing nitrogen compounds that have potential to cause algal blooms in waterways into which affected water from a septic system finds its way. This can be remedied by using a nitrogen-reducing technology, or by simply ensuring that the leach field is properly sited to prevent direct entry of effluent into bodies of water. The fermentation processes cause the contents of a septic tank to be anaerobic with a low redox potential, which keeps phosphates in a soluble and, thus, mobilized form. Phosphates discharged from a septic tank into the environment can trigger prolific plant growth including algal blooms, which can also include blooms of potentially toxic cyanobacteria. The soil's capacity to retain phosphorus is usually large enough to handle the load through a normal residential septic tank. An exception occurs when septic drain fields are located in sandy or coarser soils on property adjacent to a water body. Because of limited particle surface area, these soils can become saturated with phosphates. Phosphates will progress beyond the treatment area, posing a threat of eutrophication to surface waters.

In areas with high population density, groundwater pollution beyond acceptable limits may occur. Some small towns experience the costs of building very expensive centralized wastewater treatment systems because of this problem, due to the high cost of extended collection systems. To reduce residential development that might increase the demand to construct an expensive centralized sewerage system, building moratoriums and limitations on the subdivision of property are often imposed. Ensuring existing septic tanks are functioning properly can also be helpful for a limited time, but becomes less effective as a primary remediation strategy as population density increases.

In areas adjacent to water bodies with fish or shellfish intended for human consumption, improperly maintained and failing septic systems contribute to pollution levels that can force harvest restrictions and/or commercial or recreational harvest closures.

In the United States, the 2007 American Housing Survey indicated that about 20 percent of all households rely on septic tanks, and that the overwhelming majority of systems are located in rural (50%) and suburban (47%) areas.