Click Here for Items Related To - Olav V of Norway


Olav V (born Prince Alexander of Denmark; 2 July 1903 – 17 January 1991) was King of Norway from 1957 until his death in 1991. Olav was the only child of King Haakon VII of Norway and Maud of Wales. He became heir apparent to the Norwegian throne when his father was elected King of Norway in 1905. He was the first heir to the Norwegian throne to be brought up in Norway since Olav IV in the fourteenth century, and his parents made sure he was given as Norwegian an upbringing as possible. In preparation for his future role, he attended both civilian and military schools. In 1929, he married his first cousin Princess Märtha of Sweden. During World War II his leadership was much appreciated and he was appointed Norwegian Chief of Defence in 1944. Olav became king following the death of his father in 1957. Owing to his considerate, down-to-earth style, King Olav was immensely popular, resulting in the nickname ''Folkekongen'' ("The People's King"). In a 2005 poll by the Norwegian Broadcasting Corporation, Olav was voted "Norwegian of the Century". 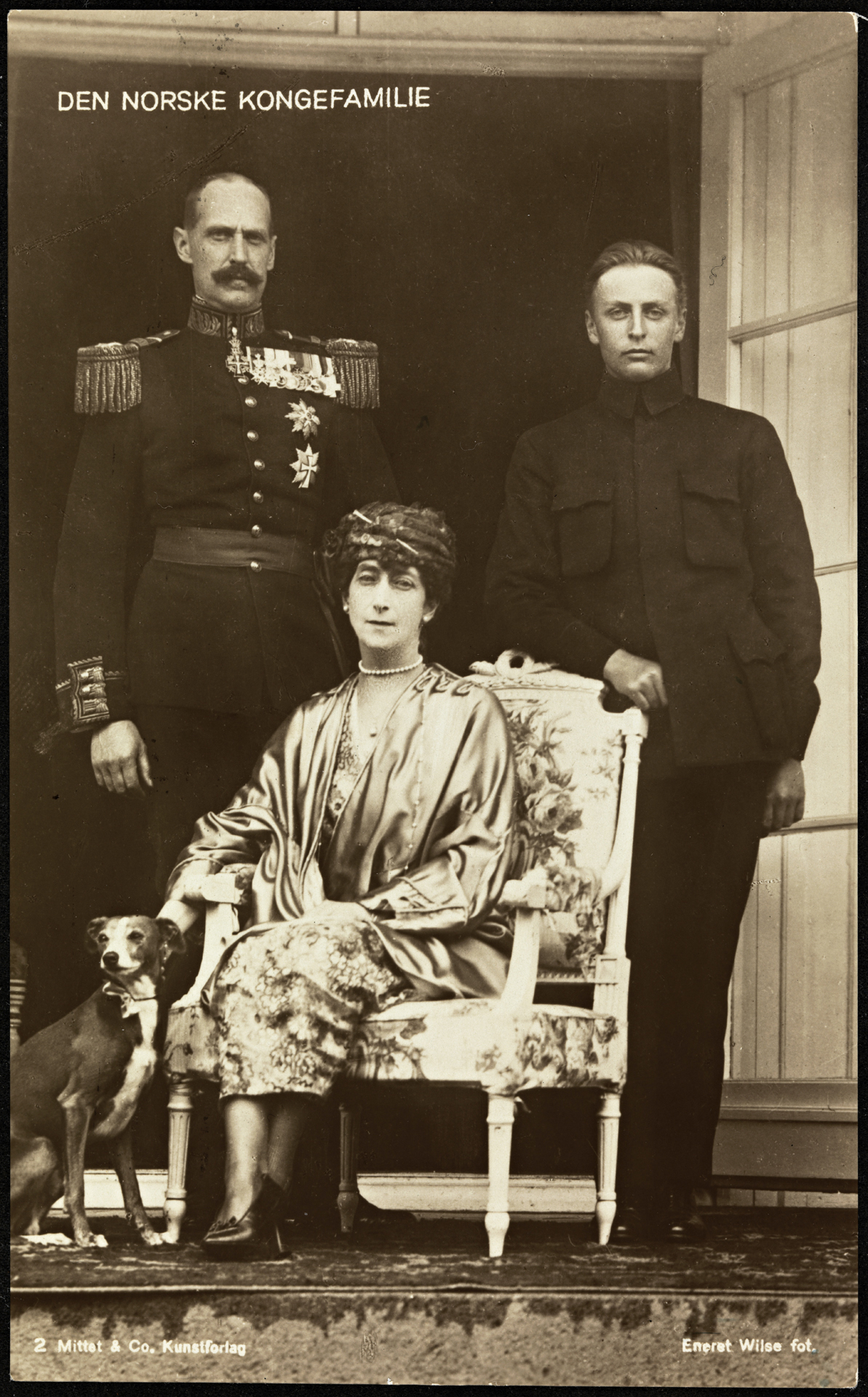 Olav was born Prince ''Alexander Edward Christian Frederik'' in Appleton House on the royal Sandringham Estate, Flitcham, United Kingdom. His parents were Prince Carl, second son of Crown Prince Frederick of Denmark (later King Frederick VIII), and Princess Maud, youngest daughter of King Edward VII of the United Kingdom, who was the eldest son of Britain's Queen Victoria. In 1905, Carl was elected king of Norway and took the name Haakon VII. On the day Haakon was crowned, he gave his two-year-old son the Norwegian name Olav after Olaf Haakonsson, king of Norway and Denmark. Olav was thus the first heir to the throne since the Middle Ages to have been raised in Norway. Unlike his father, who was a naval officer, Olav chose to complete his main military education in the army. He graduated from the three-year Norwegian Military Academy in 1924, with the fourth best score in his class. Olav then went on to study jurisprudence and economics for two years at Balliol College, Oxford. During the 1930s, Crown Prince Olav was a naval cadet serving on the minelayer/cadet training ship ''Olav Tryggvason''. Olav moved up the ranks of the Norwegian armed forces, rising in the army from an initial rank of first lieutenant to captain in 1931 and colonel in 1936. He was an accomplished athlete. Olav jumped from the Holmenkollen ski jump in Oslo and competed in sailing regattas. He won a gold medal in sailing at the 1928 Summer Olympics in Amsterdam and remained an active sailor into old age. On 21 March 1929 in Oslo, he married his first cousin Princess Märtha of Sweden with whom he had two daughters, Ragnhild and Astrid and one son, Harald. As exiles during World War II, Crown Princess Märtha and the royal children lived in Washington, D.C., where she struck up a close friendship with Franklin D. Roosevelt. She died in 1954, before her husband ascended the throne. The British Film Institute houses an early film, made in 1913, in which a miniature car (a "baby Cadillac") commissioned by Queen Alexandra for Crown Prince Olav tows a procession of Londoners through the streets of the capital, before being delivered to a pair of "royal testers" of roughly Olav's age. The car is a battery-powered, one-third size replica on a four-foot wheelbase, and is on permanent loan to the Norsk Teknisk Museum in Oslo.

As Crown Prince, Olav had received extensive military training and had participated in most major Norwegian military exercises. Because of this he was perhaps one of the most knowledgeable Norwegian military leaders and was respected by other Allied leaders for his knowledge and leadership skills. During a visit to the United States before the war, he and his wife had established a close relationship with President Roosevelt. These factors would prove to be important for the Norwegian fight against the attacking German forces. In 1939, Crown Prince Olav was appointed an admiral of the Royal Norwegian Navy and a general of the Norwegian Army. During World War II, Olav stood by his father's side in resisting the German occupation of Norway. During the campaign he was a valuable advisor both to civilian and military leaders. When the Norwegian government decided to go into exile, he offered to stay behind with the Norwegian people, but this was declined. He reluctantly followed his father to the United Kingdom, where he and his staff and servants and aides continued to be a key advisor to the government-in-exile and his father. One source states that Olav helped to "to build and lead a free fighting force" and made radio broadcasts" while in England. Olav made several visits to Norwegian and Allied troops in the United Kingdom, Canada and the United States. In 1944, he was appointed to the post of Norwegian Chief of Defence and after the war he led the Norwegian disarmament of the German occupying forces. On 13 May 1945 Crown Prince Olav and five government ministers returned to a liberated Norway. The arrival was documented in a newsreel by British Pathé News. His war decorations from other nations, including the War Crosses of Norway, France, Greece and the Netherlands, the US Legion of Merit and the French Médaille Militaire, are testament to the international recognition of his contribution to the war against Hitler.

224x224px|King Olav V at Holmenkollen in 1975 Haakon was injured in an accident in 1955; his son Olav served as regent until his death. Haakon died at the Royal Palace in Oslo on 21 September 1957. He was 85 years old. After his death, Olav succeeded him as Olav V of Norway|Olav V. Haakon was buried on 1 October 1957 alongside his wife in the white sarcophagus in the Royal Mausoleum at Akershus Fortress. He was the last surviving son of King Frederick VIII of Denmark. Succeeding to the Norwegian throne in 1957 upon his father's death, Olav reigned as a "People's King," and became extremely popular. He liked to drive his own cars, and would drive in the public lanes, even though as a monarch he was allowed to drive in bus lanes. When driving was restricted during the 1973 energy crisis, King Olav - who could have driven legally - wanted to lead by example; while preparing for a skiing trip, he dressed up in his skiing outfit and boarded the Holmenkollbanen suburban railway carrying his skis on his shoulder. When later asked how he dared to go out in public without bodyguards, he replied that "he had 4 million bodyguards"—the population of Norway was at the time 4 million. For his athletic ability and role as King, Olav earned the Holmenkollen medal in 1968, the Medal for Outstanding Civic Achievement in 1970 and was made Name of the Year in 1975. He had a strong interest in military matters and took his role as titular Commander-in-Chief very seriously. As well as his ceremonial roles in the Norwegian Army, he also served as Colonel-in-Chief of the Green Howards (Alexandra, Princess of Wales's Yorkshire Regiment), the British regiment named for his grandmother Queen Alexandra. The King represented Norway extensively abroad during his reign, conducting state visits to both neighbouring countries and more distant destinations such as Ethiopia and Iran. King Olav V opened the 14th World Scout Jamboree in July 1975 in the presence of 17,259 Scouts from 94 countries. Although the constitution nominally vested Olav with executive power, he was not responsible for exercising it. One source states that his "duties were largely ceremonial". His acts were not valid without the countersignature of a minister–usually the Prime Minister–who then became politically responsible for the act in question. He had the right to appoint the government, but in practice it was not possible for him to keep a government in office against the will of the Storting. Thus, in practice, his role was mostly representative in nature. Nonetheless, like his father before him, he commanded great moral authority as a symbol of the nation's unity.

During the summer of 1990, the King suffered from health problems, but recovered somewhat during Christmas the same year. At the age of 87, on 17 January 1991, while residing in the Royal Lodge Kongsseteren in Oslo, he became ill and died in the evening of a myocardial infarction. An interview given by King Harald V and hints in a biography by Jo Benkow, who was the President of the Storting at that time, mention the possibility that King Olav suffered great trauma upon learning of the outbreak of the first Gulf War, which began the day of his death. Olav's son Harald V succeeded him as King. On the night of his death and for several days up until the state funeral, Norwegians mourned publicly, lighting hundreds of thousands of candles in the courtyard outside the Royal Palace in Oslo, with letters and cards placed amongst them. The National Archives have preserved all these cards.

The state funeral of King Olav V was held on 30 January 1991. During the funeral procession from the Royal Palace to Oslo Cathedral, over 100,000 people lined up along Karl Johans gate to pay their respects. Prime Minister Gro Harlem Brundtland gave the eulogy at the funeral, before the casket was moved to Akershus Fortress where a private service was held. Olav was finally laid to rest next to his wife Märtha in the green sarcophagus of the Royal Mausoleum.

King Olav's leadership during the Second World War made him a symbol of Norwegian independence and national unity. As King Olav's wife, Princess Märtha, died of cancer, the King Olav V's Prize for Cancer Research was established in 1992. A 2005 poll by the Norwegian Broadcasting Corporation named King Olav "Norwegian of the Century".

Recipient of the War Cross **

Recipient of the Medal for Outstanding Civic Achievement in gold **

Recipient of the St Olav's medal **

Recipient of the War Medal **

* – A 180 000 km2 area (Prince Olav Coast) and the Prince Olav Mountains in Antarctica are named in his honour. * – Olav V Land on Svalbard is named in his honour. * – In 1961 the King was a laureate of the Nansen Refugee Award. * – In 1968 he was awarded the Holmenkollen medal. * – In 2005, Olav was proclaimed the Norwegian of the Century, with 41 percent of the tele-votes in a popular competition held by NRK. * – In 1959, Olav was granted the honorary rank of Air Chief Marshal in the Royal Air Force. * – In 1958, Olav was granted the honorary rank of Admiral in the Royal Navy, and in 1988, he was granted the honorary rank of Admiral of the Fleet. * – Honorary Freeman of Richmond * – Honorary Freedom of Newcastle upon Tyne * – Prince Olav Harbour on South Georgia is also named in his honour. * – Member of the Independent Order of Odd Fellows. * , SR Macedonia - In 1966, Olav became an honorary citizen.