Mandatory Palestine ( ar|فلسطين '; he|פָּלֶשְׂתִּינָה (א"י) ', where "E.Y." indicates ''Eretz Yīśrā'ēl'', the Land of Israel) was a geopolitical entity established between 1920 and 1948 in the region of Palestine under the terms of the League of Nations Mandate for Palestine. During the First World War (1914–18), an Arab uprising against Ottoman rule and the British Empire's Egyptian Expeditionary Force under General Edmund Allenby drove the Turks out of the Levant during the Sinai and Palestine Campaign. The United Kingdom had agreed in the McMahon–Hussein Correspondence that it would honour Arab independence if they revolted against the Ottomans, but the two sides had different interpretations of this agreement, and in the end, the UK and France divided up the area under the Sykes–Picot Agreementan act of betrayal in the eyes of the Arabs. Further complicating the issue was the Balfour Declaration of 1917, promising British support for a Jewish "national home" in Palestine. At the war's end the British and French set up a joint "Occupied Enemy Territory Administration" in what had been Ottoman Syria. The British achieved legitimacy for their continued control by obtaining a mandate from the League of Nations in June 1922. The formal objective of the League of Nations mandate system was to administer parts of the defunct Ottoman Empire, which had been in control of most of the Middle East since the 16th century, "until such time as they are able to stand alone". During the Mandate, the area saw the rise of nationalist movements in both the Jewish and Arab communities. Competing interests of the two populations led to the 1936–39 Arab revolt in Palestine and the 1944 -1948 Jewish insurgency in Mandatory Palestine. After the failure of the Arab population to accept the United Nations Partition Plan for Palestine, the 1947–1949 Palestine war ended with the territory of Mandatory Palestine divided among the State of Israel, the Hashemite Kingdom of Jordan, which annexed territory on the West Bank of the Jordan River, and the Kingdom of Egypt, which established the "All-Palestine Protectorate" in the Gaza Strip.

The name given to the Mandate's territory was "Palestine", in accordance with local Palestinian Arab and Ottoman usage as well as European traditions. The Mandate charter stipulated that Mandatory Palestine would have three official languages, namely English, Arabic and Hebrew. In 1926, the British authorities formally decided to use the traditional Arabic and Hebrew equivalents to the English name, i.e. ''filasţīn'' (فلسطين) and ''pālēśtīnā'' (פּלשׂתינה) respectively. The Jewish leadership proposed that the proper Hebrew name should be ''ʾĒrēts Yiśrāʾel'' (ארץ ישׂראל=Land of Israel). The final compromise was to add the initials of the Hebrew proposed name, Alef-Yud, within parenthesis (א״י), whenever the Mandate's name was mentioned in Hebrew in official documents. The Arab leadership saw this compromise as a violation of the mandate terms. Some Arab politicians suggested "Southern Syria" (سوريا الجنوبية) as the Arabic name instead. The British authorities rejected this proposal; according to the Minutes of the Ninth Session of the League of Nations' Permanent Mandates Commission: The adjective "Mandatory" indicates that the entity's legal status derived from a League of Nations mandate; it is not related to the word's more commonplace usage as a synonym for "compulsory" or "necessary".

Following the arrival of the British, Arab inhabitants established Muslim-Christian Associations in all of the major towns. In 1919 they joined to hold the first Palestine Arab Congress in Jerusalem. It was aimed primarily at representative government and opposition to the Balfour Declaration. Concurrently, the Zionist Commission formed in March 1918 and became active in promoting Zionist objectives in Palestine. On 19 April 1920, elections took place for the Assembly of Representatives of the Palestinian Jewish community. In March 1920, there was an attack by Arabs on the Jewish village of Tel Hai. In April, there was another attack on Jews, this time in Jerusalem. In July 1920 a British civilian administration headed by a High Commissioner replaced the military administration. The first High Commissioner, Herbert Samuel, a Zionist and a recent British cabinet minister, arrived in Palestine on 20 June 1920 to take up his appointment from 1 July. 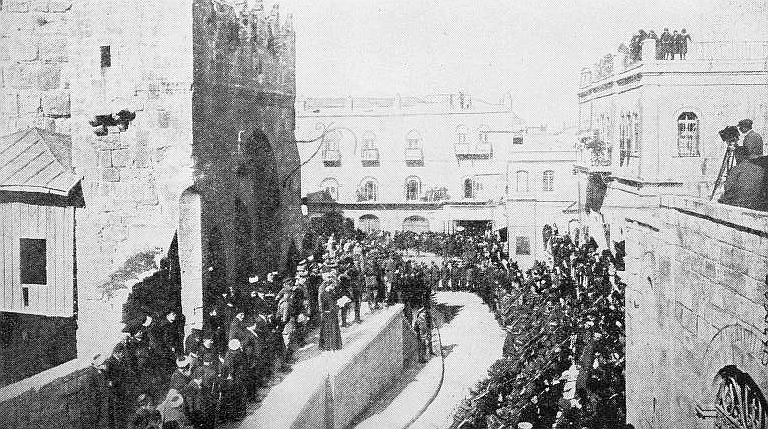 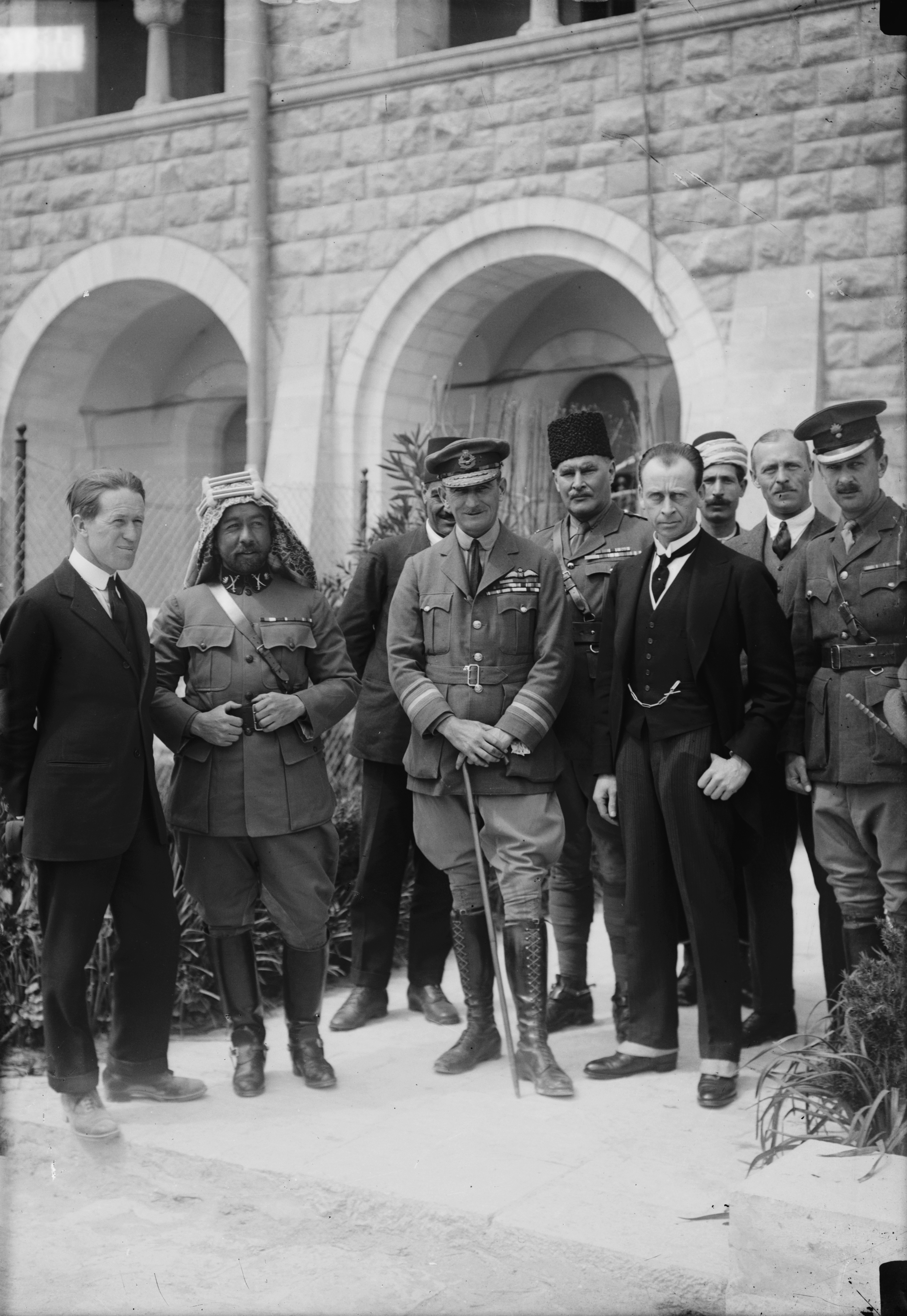 – Musa al-Husayni – Raghib al-Nashashibi – unknown One of the first actions of the newly installed civil administration was to begin granting Concessions in Mandatory Palestine|concessions from the Mandatory government over key economic assets. In 1921 the government granted Pinhas Rutenberg – a Jewish entrepreneur – concessions for the production and distribution of electrical power. Rutenberg soon established an electric company whose shareholders were Zionist organisations, investors, and philanthropists. Palestinian-Arabs saw it as proof that the British intended to favour Zionism. The British administration claimed that electrification would enhance the economic development of the country as a whole, while at the same time securing their commitment to facilitate a Jewish National Home through economicrather than politicalmeans. In May 1921, almost 100 died in rioting in Jaffa after a disturbance between rival Jewish left-wing protestors was followed by attacks by Arabs on Jews. Samuel tried to establish self-governing institutions in Palestine, as required by the mandate, but the Arab leadership refused to co-operate with any institution which included Jewish participation. When Grand Mufti of Jerusalem Kamil al-Husayni died in March 1921, High Commissioner Samuel appointed his half-brother Mohammad Amin al-Husseini to the position. Amin al-Husseini, a member of the al-Husayni clan of Jerusalem, was an Arab nationalist and Muslim leader. As Grand Mufti, as well as in the other influential positions that he held during this period, al-Husseini played a key role in violent opposition to Zionism. In 1922, al-Husseini was elected President of the Supreme Muslim Council which had been established by Samuel in December 1921. The Council controlled the Waqf funds, worth annually tens of thousands of pounds and the orphan funds, worth annually about £50,000, as compared to the £600,000 in the Jewish Agency's annual budget. In addition, he controlled the Islamic courts in Palestine. Among other functions, these courts had the power to appoint teachers and preachers. The 1922 Palestine Order in Council established a Legislative Council, which was to consist of 23 members: 12 elected, 10 appointed, and the High Commissioner.