Leonard Ray Dawson (born June 20, 1935) is a former American football quarterback who played in the National Football League (NFL) and American Football League (AFL) for 19 seasons, primarily with the Kansas City Chiefs franchise. Dawson began his professional career in 1957 with the Pittsburgh Steelers of the NFL and also played for the Cleveland Browns. He left the NFL in 1962 to sign with the AFL's Chiefs (then known as the Dallas Texans), where he spent the last 14 seasons of his career, and rejoined the NFL after the AFL–NFL merger. Dawson led the Texans/Chiefs to three American Football League Championships (1962, 1966, 1969), and the franchise's first Super Bowl title in Super Bowl IV, for which he won the game's MVP award. Dawson retired from professional football after the 1975 season and later served as the sports director at KMBC-TV in Kansas City and color analyst for the Chiefs Radio Network. Dawson owned the Chiefs' single-season passing touchdown record, which he set in 1964 with 30 touchdowns in only 14 games, a record that stood until 2018, when Patrick Mahomes threw his 31st touchdown in 10 games. He still owns the Chiefs career passing yards, touchdowns, and wins records despite last playing in 1975, the NFL expanding to 16 game seasons, and the evolution into the NFL being a pass dominated league. He also tied with current Chiefs quarterback Patrick Mahomes for playoff wins with 4. He was inducted to the Pro Football Hall of Fame in 1987.

Dawson was the ninth of 11 children of Ohio native James and England-born Annie Dawson. He attended Alliance High School in Alliance, Ohio. He was MVP of the football team and was named outstanding Ohio back of the year by the International News Service. A three-sport athlete, Dawson set school records in football and in basketball, and was the first athlete in 13 years to be named first-team all-state in both sports during the same year.

During the recruiting process, Dawson had to choose between Ohio State University in Columbus and Purdue University in Indiana. While he was reluctant to take over Woody Hayes' split-T offense with the Buckeyes, the true reason he selected Purdue stemmed from the rapport he had established with assistant coach Hank Stram, beginning a friendship that would last for more than a half century. As a sophomore in 1954, Dawson's first as Purdue quarterback, he was the NCAA's leader in pass efficiency, while also playing defense and serving as the team's kicker. Behind a strong offensive line, he threw four touchdown passes in a 31-0 victory over Missouri, then later engineered a huge upset of Notre Dame, which had entered the contest on a 13-game winning streak. During three seasons (1954-1956) with the Boilermakers, Dawson threw for over 3,000 yards, leading the Big Ten Conference in that category during each year. He was named All-American (3rd Team) during the 1956 season. He was an All-Big Ten Quarterback during the 1955 and 1956 seasons. While at Purdue, Dawson was initiated into the Alpha Tau Omega fraternity.

Dawson was drafted by the Pittsburgh Steelers in the first round of the 1957 NFL Draft, but he was unable to make an impact with the team. Following his rookie season, his status with the team became even more tenuous when the Steelers acquired future Hall of Famer Bobby Layne early in the 1958 season.

Dawson was traded to the Cleveland Browns on December 31, 1959. However, after encountering similar problems in battling Browns quarterback Milt Plum, Dawson was released, having completed only 21 passes for 204 yards and two touchdowns in his five seasons of NFL play.

Dawson signed with the American Football League's Dallas Texans on June 30, 1962. The move reunited him with Stram, who was beginning his third year as the Texans' head coach. In 1962, Dawson led the league in touchdowns and yards per attempt, and was ''The Sporting News selection as the AFL MVP. He also led Dallas to the first of three league titles in a thrilling double-overtime victory over the two-time defending champion Oilers in Houston. Dawson ran a ball-control offense in the 20-17 win, and tossed a 28-yard touchdown pass to halfback Abner Haynes. The team moved north to Kansas City and was renamed to the Chiefs in 1963. 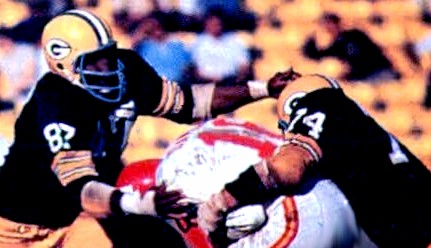 A pinpoint passer, Dawson's mobility helped him flourish in Stram's "moving pocket" offense. He would win four AFL passing titles and was selected as a league All-Star six times, ending the 10-year run of the league as its highest-rated career passer. From 1962 to 1969, Dawson threw more touchdown passes (182) than any other professional football quarterback. In 1966, Dawson led the Chiefs to an 11-2-1 record and a 31-7 win over the Buffalo Bills in the AFL Championship Game, earning his team the honor of representing the AFL in Super Bowl I, the first championship game between the AFL and their NFL rivals. The NFL champion Green Bay Packers won easily, 35-10, but Dawson performed fairly well, completing 16 of 27 passes for 210 yards and one touchdown, with one interception. Dawson was selected by his peers as a ''Sporting News'' 1966 AFL All-League player. Though he threw for more than 2,000 yards in each of the previous seven campaigns, Dawson's 1969 season with Kansas City would be his most memorable because of his dramatic comeback from a knee injury suffered in the season's second game. The injury was first feared to be season-ending, but after missing five games, Dawson went on to lead the Chiefs to road playoff victories over both the defending champion New York Jets and the Oakland Raiders. He then capped his year with MVP accolades in Super Bowl IV, the last game ever played by an American Football League team. In the game, Dawson paced the Chiefs to a win over the NFL's heavily favored Minnesota Vikings by completing 12 of 17 passes for 142 yards and a touchdown, with one interception, and rushing for 11 yards. The performance was especially notable given that Dawson had been mistakenly linked to a gambling scandal (by an unrelated gentleman who was named Donald Dawson) in the days leading up to the game. On November 1, 1970, the Chiefs led the Oakland Raiders 17-14 late in the fourth quarter. Facing third and long, a run by Dawson apparently sealed victory for the Chiefs, but as Dawson lay on the ground, he was speared by Raiders’ defensive end Ben Davidson, who dove into Dawson with his helmet, provoking Chiefs’ receiver Otis Taylor to attack Davidson. After a bench-clearing brawl, offsetting penalties were called, nullifying the first down under the rules in effect at that time. The Chiefs were obliged to punt, and the Raiders tied the game on a George Blanda field goal with eight seconds to play. Taylor’s retaliation against Davidson not only cost the Chiefs a win, but Oakland won the AFC West with a season record of 8-4-2, while Kansas City finished 7-5-2 and out of the playoffs.

Dawson announced his retirement in May 1976, shortly before turning 41.