Grenoble ( , ; ) is the prefecture and largest city of the Isère department in the Auvergne-Rhône-Alpes region of Southeastern France. It lies at the foot of the French Alps where the river Drac joins the Isère. A significant European scientific centre, the city advertises itself as the "Capital of the Alps", due to its size and its proximity to the mountains. The population of the commune of Grenoble was 158,180 at the 2016 census, while the population of the Grenoble metropolitan area (French: ''aire urbaine de Grenoble'' or "agglomération grenobloise") was 687,985 which makes it the largest metropolis in the Alps, ahead of Innsbruck and Bolzano. The residents of the city are called "Grenoblois". The many suburb communes that make up the rest of the metropolitan area include four with populations exceeding 20,000: Saint-Martin-d'Hères, Échirolles, Fontaine and Voiron. Grenoble's history goes back over 2,000 years, to a time when it was a village of the Allobroges Gallic tribe. It became the capital of the Dauphiné in the 11th century. This status, consolidated by the annexation to France, allowed it to develop its economy. Grenoble then became a parliamentary and military city, close to the border with Savoy. Industrial development increased the prominence of Grenoble through several periods of economic expansion over the last three centuries. This started with a booming glove industry in the 18th and 19th centuries, continued with the development of a strong hydropower industry in the late 19th to early 20th centuries and ended with a post-World War II economic boom symbolized by the holding of the X Olympic Winter Games in 1968. The city has grown to be one of Europe's most important research, technology and innovation centres, with one in five inhabitants working directly in these fields. Grenoble is classified as a global city with the ranking of "sufficiency" by the Globalization and World Cities Research Network. The city will hold the title of European Green Capital in 2022.

The first references to what is now Grenoble date back to 43 BC. Cularo was at that time a Gallic village of the Allobroges tribe, near a bridge across the Isère. Three centuries later and with insecurity rising in the late Roman empire, a strong wall was built around the small town in 286 AD. The Emperor Gratian visited Cularo and, touched by the people's welcome, made the village a Roman city. In honour of this, Cularo was renamed Gratianopolis ("city of Gratian") in 381 (leading to Graignovol during the Middle Age and then Grenoble). Christianity spread to the region during the 4th century, and the diocese of Grenoble was founded in 377 AD. From that time on, the bishops exercised significant political power over the city. Until the French Revolution, they styled themselves the "bishops and princes of Grenoble".

After the collapse of the Roman Empire, the city was part of the first Burgundian kingdom in the 5th century and the second Burgundian Kingdom of Arles until 1032, when it was integrated into the Holy Roman Empire. Arletian rule was interrupted between 942 and 970 due to Arab rule based in Fraxinet. Grenoble grew significantly in the 11th century when the Counts of Albon chose the city as the capital of their territories. At the time, their possessions were a patchwork of several territories sprawled across the region. The central position of Grenoble allowed the Counts to strengthen their authority. When they later took the title of "Dauphins", Grenoble became the capital of the State of Dauphiné. Despite their status, the Counts had to share authority over the city with the Bishop of Grenoble. One of the most famous of those was Saint Hugh. Under his rule, the city's bridge was rebuilt, and a regular and leper hospital were built.

The inhabitants of Grenoble took advantage of the conflicts between the Counts and the bishops and obtained the recognition of a Charter of Customs that guaranteed their rights. That charter was confirmed by Kings Louis XI in 1447 and Francis I in 1541. In 1336 the last Dauphin Humbert II founded a court of justice, the , which settled at Grenoble in 1340. He also established the University of Grenoble in 1339. Without an heir, Humbert sold his state to France in 1349, on the condition that the heir to the French crown used the title of ''Dauphin.'' The first one, the future Charles V, spent nine months in Grenoble. The city remained the capital of the Dauphiné, henceforth a province of France, and the Estates of Dauphiné were created. The only Dauphin who really governed his province was the future Louis XI, whose "reign" lasted from 1447 to 1456. It was only under his rule that Dauphiné properly joined the Kingdom of France. The Old Conseil Delphinal became a Parlement (the third in France after the Parliaments of Paris and Toulouse), strengthening the status of Grenoble as a Provincial capital. He also ordered the construction of the Palais du Parlement (finished under Francis I) and ensured that the Bishop pledged allegiance, thus forging the political union of the city. At that time, Grenoble was a crossroads between Vienne, Geneva, Italy, and Savoy. It was the industrial centre of the Dauphiné and the biggest city of the province, but nonetheless a rather small one. 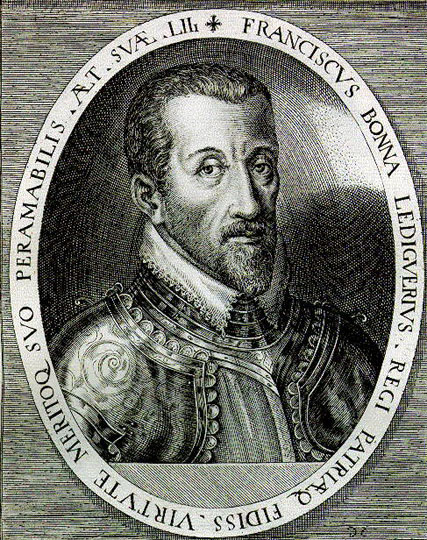 Owing to Grenoble's geographical situation, French troops were garrisoned in the city and its region during the Italian Wars. Charles VIII, Louis XII, and Francis I went several times to Grenoble. Its people consequently had to suffer from the exactions of the soldiers. The nobility of the region took part in various battles (Marignano, Pavia) and in doing so gained significant prestige. The best-known of its members was Bayard, "the knight without fear and beyond reproach". Grenoble suffered as a result of the French Wars of Religion. The Dauphiné was indeed an important settlement for Protestants and therefore experienced several conflicts. The baron des Adrets, the leader of the Huguenots, pillaged the Cathedral of Grenoble and destroyed the tombs of the former Dauphins. In August 1575, Lesdiguières became the new leader of the Protestants and, thanks to the accession of Henry IV to the throne of France, allied himself with the governor and the lieutenant general of the Dauphiné. But this alliance did not bring an end to the conflicts. Indeed, a Catholic movement, the ''Ligue'', which took Grenoble in December 1590, refused to make peace. After months of assaults, Lesdiguières defeated the Ligue and took back Grenoble. He became the leader of the entire province. Lesdiguières became the lieutenant-general of the Dauphiné and administered the Province from 1591 to 1626. He began the construction of the Bastille in order to protect the city and ordered the construction of new walls, increasing the city's size. He also constructed the Hôtel Lesdiguières, built new fountains, and dug sewers. In 1689, the bishop Étienne Le Camus launched the construction of Saint-Louis Church.

From Louis XIV to the French Revolution

The revocation of the Edict of Nantes by Louis XIV caused the departure of 2,000 Protestants from Grenoble, weakening the city's economy. However, it also weakened the competing glove industry of Grasse, leaving the glove factories of Grenoble without any competition. This allowed a stronger economic development for the city during the 18th century. At the beginning of that century, only 12 glovers made 15,000 dozen gloves each year; by 1787, 64 glovers made 160,000 dozen gloves each year. The city gained some notoriety on 7 June 1788 when the townspeople assaulted troops of Louis XVI in the "Day of the Tiles".