The Great Turkish War (german: Großer Türkenkrieg) or the War of the Holy League ( tr|Kutsal İttifak Savaşları) was a series of conflicts between the Ottoman Empire and the Holy League consisting of the Habsburg Monarchy, Poland-Lithuania, Venice and Russia. Intensive fighting began in 1683 and ended with the signing of the Treaty of Karlowitz in 1699. The war was a defeat for the Ottoman Empire, which for the first time lost large amounts of territory. It lost lands in Hungary and the Polish–Lithuanian Commonwealth, as well as part of the western Balkans. The war was also significant in that it marked the first time Russia was involved in a western European alliance. 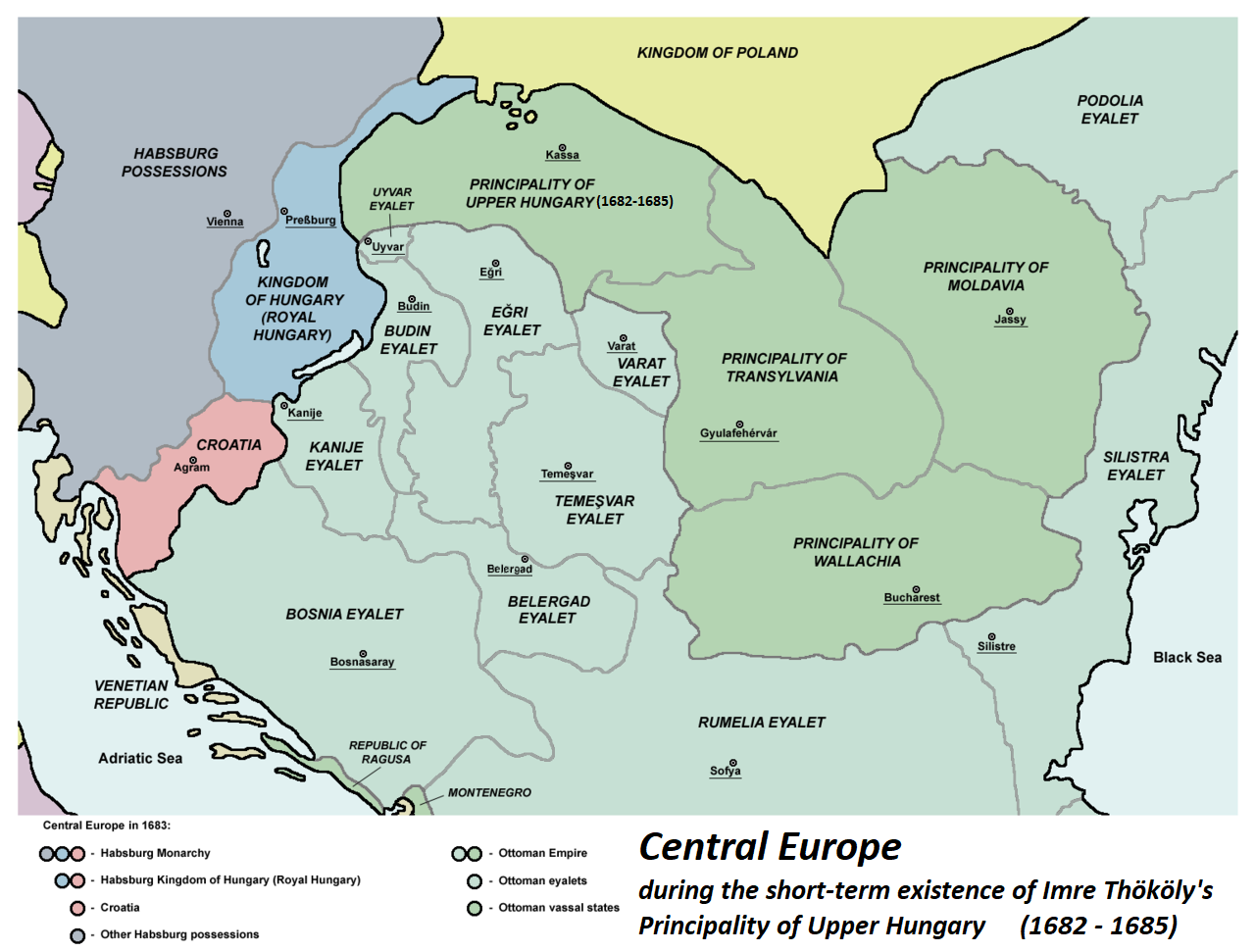 The northern Balkans, after the Treaty of Karlowitz.

After Bohdan Khmelnytsky's rebellion, when the Tsardom of Russia acquired territories from the Polish–Lithuanian Commonwealth (today parts of Eastern Ukraine), some Cossacks stayed in the southeast of the Commonwealth. Their leader, Petro Doroshenko, wanted to connect the rest of his dominions with the Ottoman Empire, starting a rebellion against Hetman (Polish army commander) John Sobieski. Sultan Mehmed IV, who knew that the Polish–Lithuanian Commonwealth was weakened due to internal conflicts, attacked Kamianets-Podilskyi, a large city on the border. The small Polish force resisted the Siege of Kamenets for two weeks but was then forced to capitulate. The Polish Army was too small to resist the Ottoman invasion and could only score some minor tactical victories. After three months, the Poles were forced to sign the Treaty of Buchach in which they agreed to surrender Kamyanets-Podilsky, Podolia and to pay tribute to the Ottoman Sultan. When the news of the defeat and treaty terms reached Warsaw, the Sejm refused to pay the tribute and organized a large army under Sobieski; subsequently, the Poles won the Battle of Khotyn (1673). After the death of King Michael in 1673, Sobieski was elected king of Poland. He tried to defeat the Ottomans for four years, with no success. The war ended on 17 October 1676 with the Treaty of Żurawno in which the Turks only retained control over Kamianets-Podilskyi. This Turkish attack also led in 1676 to the beginning of the Russo-Turkish Wars.

After a few years of peace, the Ottoman Empire, encouraged by successes in the west of the Polish–Lithuanian Commonwealth, attacked the Habsburg Monarchy. The Turks almost captured Vienna, but John III Sobieski led a Christian alliance that defeated them in the Battle of Vienna (1683), stalling the Ottoman Empire's hegemony in south-eastern Europe. A new Holy League was initiated by Pope Innocent XI and encompassed the Holy Roman Empire (headed by Habsburg Austria), Polish–Lithuanian Commonwealth and the Venetian Republic in 1684, joined by Russia in 1686. The second Battle of Mohács (1687) was a crushing defeat for the Sultan. The Turks were more successful on the Polish front and were able to retain Podolia during their battles with the Polish–Lithuanian Commonwealth. Russia's involvement marked the first time the country formally joined an alliance of European powers. This was the beginning of a series of Russo-Turkish Wars, the last of which was World War I. As a result of the Crimean campaigns and Azov campaigns, Russia captured the key Ottoman fortress of Azov. Following the decisive Battle of Zenta in 1697 and lesser skirmishes (such as the Battle of Podhajce in 1698), the League won the war in 1699 and forced the Ottoman Empire to sign the Treaty of Karlowitz. The Ottomans ceded most of Hungary, Transylvania and Slavonia, as well as parts of Croatia, to the Habsburg Monarchy while Podolia returned to Poland. Most of Dalmatia passed to Venice, along with the Morea (the Peloponnese peninsula), which the Ottomans reconquered in 1715 and regained in the Treaty of Passarowitz of 1718. 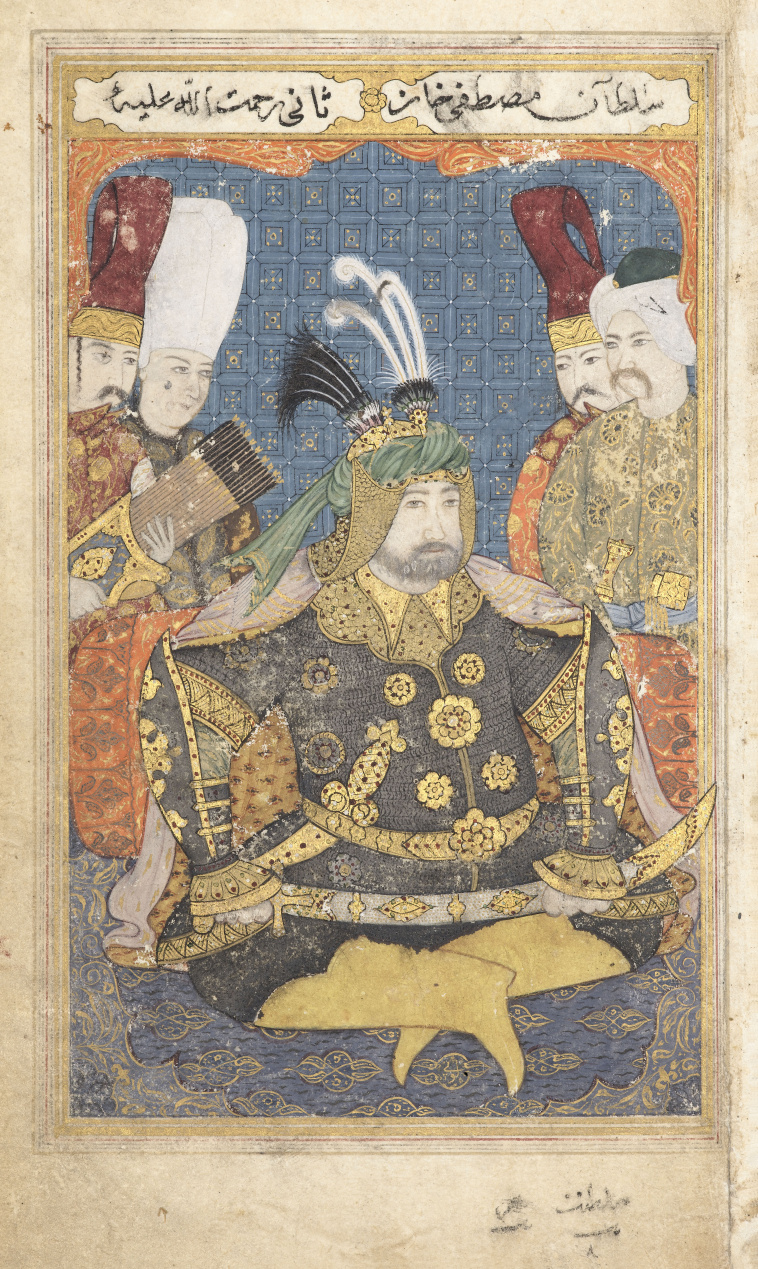 Venice had held several islands in the Aegean and the Ionian seas, together with strategically positioned forts along the coast of the Greek mainland since the carving up of the Byzantine Empire after the Fourth Crusade. However, with the rise of the Ottomans, during the 16th and early 17th centuries, they lost most of these, such as Cyprus and Euboea (Negropont) to the Turks. Between 1645 and 1669, the Venetians and the Ottomans fought a long and costly war over the last major Venetian possession in the Aegean, Crete. During this war, the Venetian commander, Francesco Morosini, came into contact with the rebellious Maniots, for a joint campaign in the Morea. In 1659, Morosini landed in the Morea, and together with the Maniots, he took Kalamata. However, he was soon after forced to return to Crete, and the Peloponnesian venture failed. In 1683, a new war broke out between the Habsburg Monarchy and the Ottomans, with a large Ottoman army advancing towards Vienna. In response to this, a Holy League was formed. After the Ottoman army was defeated in the Battle of Vienna, the Venetians decided to use the opportunity of the weakening of Ottoman power and its distraction in the Danubian front so as to reconquer its lost territories in the Aegean and Dalmatia. On 25 April 1684, the Most Serene Republic declared war on the Ottomans. Aware that she would have to rely on her own strength for success, Venice prepared for the war by securing financial and military aid in men and ships from the Knights of Malta, the Duchy of Savoy, the Papal States, and the Knights of St. Stephen. In addition, the Venetians enrolled large numbers of mercenaries from Italy and the German states, especially Saxony and Brunswick.


Operations in the Ionian Sea

In mid-June, the Venetian fleet moved from the Adriatic towards the Ottoman-held Ionian Islands. The first target was the island of Lefkada (Santa Maura), which fell, after a brief siege of 16 days, on 6 August 1684. The Venetians, aided by Greek irregulars, then crossed into the mainland and started raiding the opposite shore of Acarnania. Most of the area was soon under Venetian control, and the fall of the forts of Preveza and Vonitsa in late September removed the last Ottoman bastions. These early successes were important for the Venetians not only for reasons of morale, but because they secured their communications with Venice, denied to the Ottomans the possibility of threatening the Ionian Islands or of ferrying troops via western Greece to the Peloponnese, and because these successes encouraged the Greeks to cooperate with them against the Ottomans.


The conquest of the Morea

Having secured his rear during the previous year, Morosini set his sights upon the Peloponnese, where the Greeks, especially the Maniots, had begun showing signs of revolt and communicated with Morosini, promising to rise up in his aid. Ismail Pasha, the new military commander of Morea, learned of this and invaded the Mani peninsula with 10,000 men, reinforcing the three forts that the Ottomans already garrisoned, and compelled the Maniots to give up hostages to secure their loyalty. As a result, the Maniots remained uncommitted when, on 25 June 1685, the Venetian army, 8,100 men strong, landed outside the former Venetian fort of Koroni and laid siege to it. The castle surrendered after 49 days, on 11 August, and the garrison was massacred. After this success, Morosini embarked his troops towards the town of Kalamata, in order to encourage the Maniots to revolt. The Venetian army, reinforced by 3,300 Saxons and under the command of general , defeated a Turkish force of ca. 10,000 outside Kalamata on 14 September, and by the end of the month, all of Mani and much of Messenia were under Venetian control.

In October 1685, the Venetian army retreated to the Ionian Islands for winter quarters, where a plague broke out, something which would occur regularly in the next years, and take a great toll on the Venetian army, especially among the German contingents. In April 1686, the Venetians helped repulse an Ottoman attack that threatened to overrun Mani, and were reinforced from the Papal States and Tuscany. The Swedish marshal Otto Wilhelm Königsmarck was appointed head of the land forces, while Morosini retained command of the fleet. On 3 June Königsmarck took Pylos and proceeded to lay siege the fortress of Navarino. A relief force under Ismail Pasha was defeated on June 16, and the next day the fort surrendered. The garrison and the Muslim population were transported to Tripoli. Methoni (Modon) followed on 7 July, after an effective bombardment destroyed the fort's walls, and its inhabitants were also transferred to Tripoli. The Venetians then advanced towards Argos and Nafplion, which was then the most important town in the Peloponnese. The Venetian army, ca. 12,000 strong, landed around Nafplion between 30 July and August 4. Königsmarck immediately led an assault upon the hill of Palamidi, then unfortified, which overlooked the town. Despite the Venetians' success in capturing Palamidi, the arrival of a 7,000 strong Ottoman army under Ismail Pasha at Argos rendered their position difficult. The Venetians' initial assault against the relief army succeeded in taking Argos and forcing the pasha to retreat to Corinth, but for two weeks, from 16 August, Königsmarck's forces were forced to continuously repulse attacks from Ismail Pasha's forces, fight off the sorties of the besieged Ottoman garrison and cope with a new outbreak of plague. On 29 August 1686 Ismail Pasha attacked the Venetian camp, but was heavily defeated. With the defeat of the relief army, Nafplion was forced to surrender on September 3. News of this major victory were greeted in Venice with joy and celebration. Nafplion became the Venetians' major base, while Ismail Pasha withdrew to Achaea after strengthening the garrisons at Corinth, which controlled the passage to Central Greece. Despite losses to the plague during the autumn and winter of 1686, Morosini's forces were replenished by the arrival of new German mercenary corps from Hannover in spring 1687. Thus strengthened, he was able to move against the last major Ottoman bastion in the Peloponnese, the town of Patras and the fort of Rion, which along with its twin at Antirrion controlled the entrance to the Corinthian Gulf (the "Little Dardanelles"). On 22 July 1687, Morosini, with a force of 14,000, landed outside Patras, where the new Ottoman commander, Mehmed Pasha, had established himself. Mehmed, with an army of roughly equal size, attacked the Venetian force immediately after it landed, but was defeated and forced to retreat. At this point panic spread among the Ottoman forces, and the Venetians were able, within a few days, to capture the citadel of Patras, and the forts of Rion, Antirrion, and Nafpaktos (Lepanto) without any opposition, as their garrisons abandoned them. This new success caused great joy in Venice, and honours were heaped on Morosini and his officers. Morosini received the victory title "''Peloponnesiacus''", and a bronze bust of his was displayed in the Great Hall, something never before done for a living citizen. The Venetians followed up this success with the reduction of the last Ottoman bastions in the Peloponnese, including Corinth, which was occupied on 7 August, and Mystra, which surrendered later in the month. The Peloponnese was under complete Venetian control, and only the fort of Monemvasia (Malvasia) in the southeast continued to resist, holding out until 1690.

After a few years of peace, the Ottoman Empire attacked the Habsburg Monarchy again. The Turks almost captured the Empire's capital of Vienna, but king of Poland John III Sobieski led a Christian alliance that defeated them in the Battle of Vienna, which shook the Ottoman Empire's hegemony in south-eastern Europe. A new Holy League was initiated by Pope Innocent XI and encompassed the Holy Roman Empire (headed by Habsburg Austria), joined by the Venetian Republic and Poland in 1684 and the Tsardom of Russia in 1686. Ottomans suffered two decisive defeats against the Holy Roman Empire: the second Battle of Mohács in 1687 and the Battle of Zenta a decade later, in 1697. On the smaller Polish front, after the battles of 1683 (Vienna and Parkany), Sobieski, after his proposal for the League to state a major coordinated offensive, undertook a rather unsuccessful offensive in Moldavia in 1686, with the Ottomans refusing a major engagement and harassing the army. For the next four years Poland would blockade the key fortress at Kamenets, and Ottoman Tatars would raid the borderlands. In 1691, Sobieski undertook another expedition to Moldavia, with slightly better results, but still with no decisive victories.