Gansu (; alternately romanized as Kansu) is a landlocked province in Northwest China. Its capital and largest city is Lanzhou, in the southeast part of the province. The seventh-largest administrative district by area at , Gansu lies between the Tibetan and Loess plateaus and borders Mongolia (Govi-Altai Province), Inner Mongolia and Ningxia to the north, Xinjiang and Qinghai to the west, Sichuan to the south and Shaanxi to the east. The Yellow River passes through the southern part of the province. Part of Gansu's territory is located in the Gobi Desert. The Qilian mountains are located in the south of the Province. Gansu has a population of 26 million, ranking 22nd in China. Its population is mostly Han, along with Hui, Dongxiang and Tibetan minorities. The most common language is Mandarin. Gansu is among the poorest administrative divisions in China, ranking 31st, last place, in GDP per capita as of 2019. The State of Qin originated in what is now southeastern Gansu and went on to form the first known Empire in what is now China. The Northern Silk Road ran through the Hexi Corridor, which passes through Gansu, resulting in it being an important strategic outpost and communications link for the Chinese empire. The city of Jiayuguan, the second most populated city in Gansu, is known for its section of the Great Wall and the Jiayuguan Pass fortress complex.

Gansu is a compound of the names of Gānzhou (now the main urban district and seat of Zhangye) and Sùzhou (an old name and the modern seat of Jiuquan), formerly the two most important Chinese settlements in the Hexi Corridor. Gansu is abbreviated as "" () or "" (), and was also known as Longxi () or Longyou () prior to early Western Han dynasty, in reference to the Long Mountain (the modern day Liupan Mountain's southern section) between eastern Gansu and western Shaanxi.

Gansu's name is a compound name first used during the Song dynasty. It is a combination of the names of two prefecture () in the Sui and Tang dynasty: Gan (around Zhangye) and Su (around Jiuquan). Its eastern part forms part of one of the cradles of ancient Chinese civilisation.

In prehistoric times, Gansu was host to Neolithic cultures. The Dadiwan culture, from where archaeologically significant artifacts have been excavated, flourished in the eastern end of Gansu from about 6000BC to about 3000BC. The Majiayao culture and part of the Qijia culture took root in Gansu from 3100 BC to 2700 BC and 2400 BC to 1900 BC respectively. The Yuezhi originally lived in the very western part of Gansu until they were forced to emigrate by the Xiongnu around 177 BCE. The State of Qin, known in China as the founding state of the Chinese empire, grew out from the southeastern part of Gansu, specifically the Tianshui area. The Qin name is believed to have originated, in part, from the area. Qin tombs and artifacts have been excavated from Fangmatan near Tianshui, including one 2200-year-old map of Guixian County.

In imperial times, Gansu was an important strategic outpost and communications link for the Chinese empire, as the Hexi Corridor runs along the "neck" of the province. The Han dynasty extended the Great Wall across this corridor, building the strategic Yumenguan (Jade Gate Pass, near Dunhuang) and Yangguan fort towns along it. Remains of the wall and the towns can be found there. The Ming dynasty built the Jiayuguan outpost in Gansu. To the west of Yumenguan and the Qilian Mountains, at the northwestern end of the province, the Yuezhi, Wusun, and other nomadic tribes dwelt (Shiji 123), occasionally figuring in regional imperial Chinese geopolitics. By the Qingshui treaty, concluded in 823 between the Tibetan Empire and the Tang dynasty, China lost much of western Gansu province for a significant period. After the fall of the Uyghur Khaganate, a Buddhist Yugur (Uyghur) state called the Ganzhou Uyghur Kingdom was established by migrating Uyghurs from the Khaganate in part of Gansu that lasted from 848 to 1036AD. Along the Silk Road, Gansu was an economically important province, as well as a cultural transmission path. Temples and Buddhist grottoes such as those at Mogao Caves ('Caves of the Thousand Buddhas') and Maijishan Caves contain artistically and historically revealing murals. An early form of paper inscribed with Chinese characters and dating to about 8BC was discovered at the site of a Western Han garrison near the Yumen pass in August 2006. The Xixia or Western Xia dynasty controlled much of Gansu as well as Ningxia. The province was also the origin of the Dungan Revolt of 1862–77. Among the Qing forces were Muslim generals, including Ma Zhan'ao and Ma Anliang, who helped the Qing crush the rebel Muslims. The revolt had spread into Gansu from neighbouring Qinghai. There was another Dungan revolt from 1895 to 1896.

As a result of frequent earthquakes, droughts and famines, the economic progress of Gansu was significantly slower than that of other provinces of China until recently. Based on the area's abundant mineral resources it has begun developing into a vital industrial center. An earthquake in Gansu at 8.6 on the Richter scale killed around 180,000 people mostly in the present-day area of Ningxia in 1920, and another with a magnitude of 7.6 killed 275 in 1932. The Muslim Conflict in Gansu (1927–1930) was a conflict against the Guominjun. While the Muslim General Ma Hongbin was acting chairman of the province, Muslim General Ma Buqing was in virtual control of Gansu in 1940. Liangzhou District in Wuwei was previously his headquarters in Gansu, where he controlled 15 million Muslims. Xinjiang came under Kuomintang (Nationalist) control after their soldiers entered via Gansu. Gansu's Tienshui was the site of a Japanese-Chinese warplane fight. Gansu was vulnerable to Soviet penetration via Xinjiang. Gansu was a passageway for Soviet war supplies for the Republic of China during the Second Sino-Japanese War. Lanzhou was a destination point via a road coming from Dihua (Ürümqi). The Gonxingdun Aerodrome was one of several air bases where the Chinese Air Force operated in defense of Gansu. Gansu provided wartime China with most of the locally-sourced petrol from the Yumen Laojunmiao oil wells beginning in the summer of 1939, producing 250,000 tons of crude oil in those war years. Lanzhou and Lhasa were designated to be recipients of a new railway. The Kuomintang Islamic insurgency in China (1950–1958) was a prolongation of the Chinese Civil War in several provinces including Gansu. 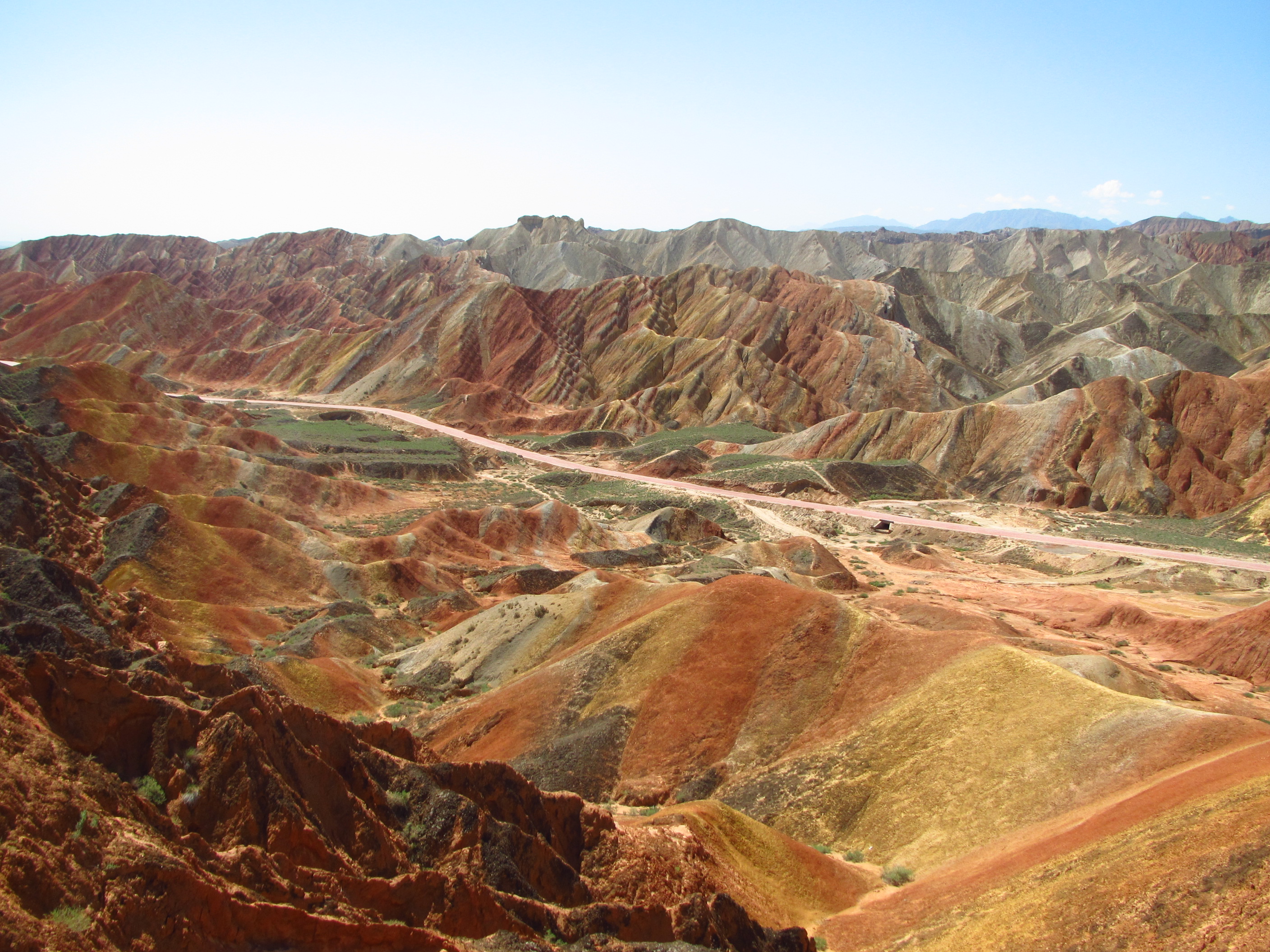 Gansu has an area of , and the vast majority of its land is more than above sea level. It lies between the Tibetan Plateau and the Loess Plateau, bordering Mongolia (Govi-Altai Province) to the northwest, Inner Mongolia and Ningxia to the north, Shaanxi to the east, Sichuan to the south, and Xinjiang to the west. The Yellow River passes through the southern part of the province. The province contains the geographical centre of China, marked by the Center of the Country Monument at . Part of the Gobi Desert is located in Gansu, as well as small parts of the Badain Jaran Desert and the Tengger Desert. The Yellow River gets most of its water from Gansu, flowing straight through Lanzhou. The area around Wuwei is part of Shiyang River Basin. The landscape in Gansu is very mountainous in the south and flat in the north. The mountains in the south are part of the Qilian Mountains, while the far western Altyn-Tagh contains the province's highest point, at . A natural land passage known as Hexi Corridor, stretching some from Lanzhou to the Jade Gate, is situated within the province. It is bound from north by the Gobi Desert and Qilian Mountains from the south. Gansu generally has a semi-arid to arid continental climate (Köppen ''BSk'' or ''BWk'') with warm to hot summers and cold to very cold winters, although diurnal temperature ranges are often so large that maxima remain above even in winter. However, due to extreme altitude, some areas of Gansu exhibit a subarctic climate (''Dwc'') – with winter temperatures sometimes dropping to . Most of the limited precipitation is delivered in the summer months: winters are so dry that snow cover is confined to very high altitudes and the snow line can be as high as in the southwest.