Parietal cells (also known as oxyntic cells) are
epithelial cells Epithelium () is one of the four basic types of animal Animals (also called Metazoa) are multicellular eukaryotic organisms that form the Kingdom (biology), biological kingdom Animalia. With few exceptions, animals Heterotroph, consume ...
in the
stomach The stomach is a muscular, hollow organ in the gastrointestinal tract of humans and many other animals, including several invertebrates. The stomach has a dilated structure and functions as a vital digestive organ. In the digestive system ...
that secrete
hydrochloric acid Hydrochloric acid, also known as muriatic acid, is an aqueous solution of hydrogen chloride. It is a colorless solution with a distinctive pungent smell. It is classified as a strong acid. It is a component of the gastric acid in the diges ...
(HCl) and intrinsic factor. These cells are located in the gastric glands found in the lining of the fundus and
body Body may refer to: In science * Physical body, an object in physics that represents a large amount, has mass or takes up space * Body (biology), the physical material of an organism * Body plan, the physical features shared by a group of animals ...
regions of the stomach. They contain an extensive secretory network of canaliculi from which the HCl is secreted by
active transport In cellular biology, active transport is the movement of molecules across a cell membrane cell membrane vs. Prokaryotes The cell membrane (also known as the plasma membrane (PM) or cytoplasmic membrane, and historically referred to as the pla ...
into the stomach. The enzyme
hydrogen potassium ATPase 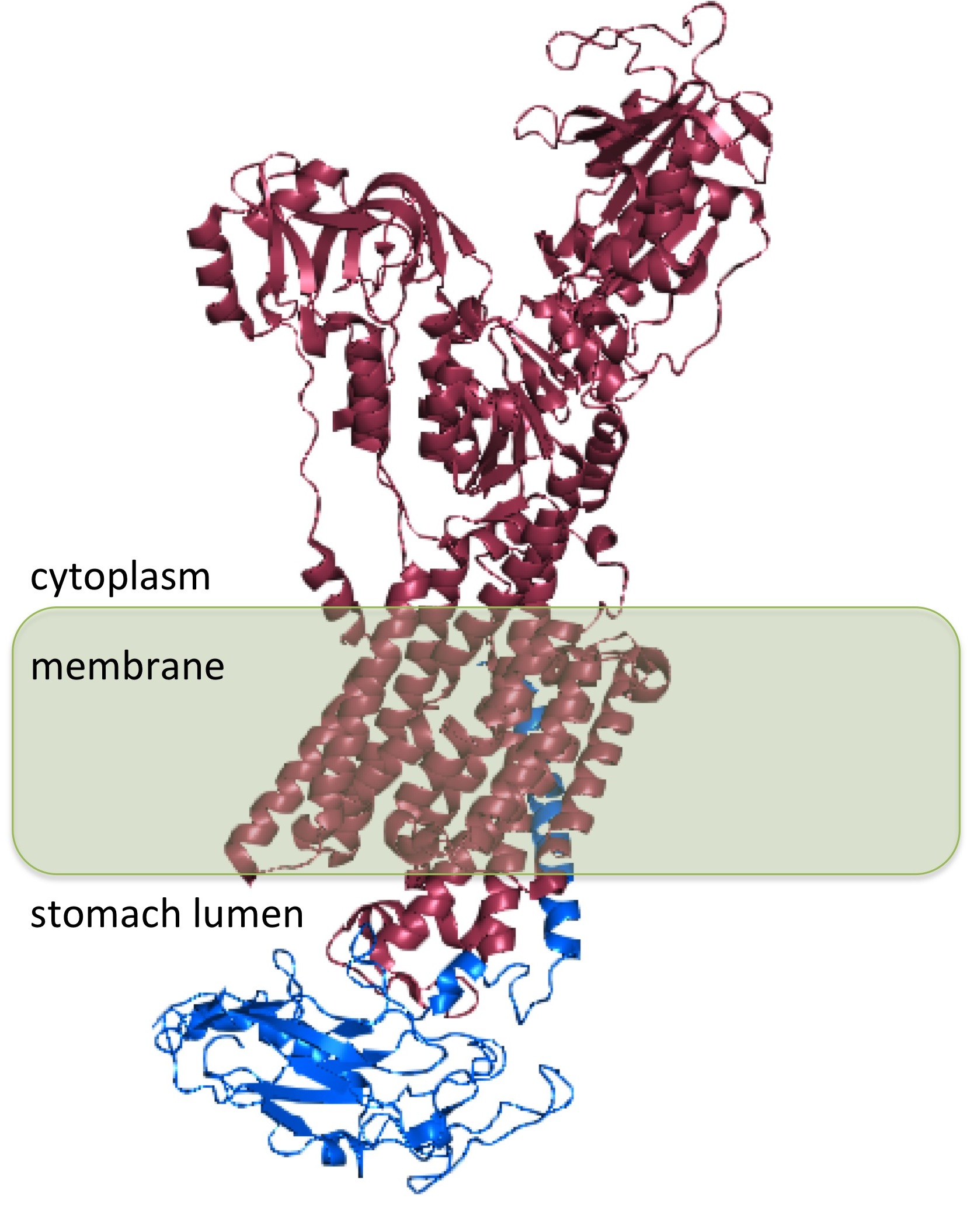 (H+/K+ ATPase) is unique to the parietal cells and transports the H+ against a
concentration In chemistry Chemistry is the scientific discipline involved with Chemical element, elements and chemical compound, compounds composed of atoms, molecules and ions: their composition, structure, properties, behavior and the changes they unde ...

gradient of about 3 million to 1, which is the steepest ion gradient formed in the human body. Parietal cells are primarily regulated via
histamine Histamine is an organic nitrogen Nitrogen is the chemical element with the Symbol (chemistry), symbol N and atomic number 7. It was first discovered and isolated by Scottish physician Daniel Rutherford in 1772. Although Carl Wilhelm Scheele a ...

,
acetylcholine Acetylcholine (ACh) is an organic chemical that functions in the brain and body of many types of animals (including humans) as a neurotransmitter—a chemical message released by nerve cells to send signals to other cells, such as neurons, muscl ...

and
gastrin Gastrin is a peptide hormonePeptide hormones or protein hormones are hormones whose molecules are peptides or proteins, respectively. The latter have longer amino acid chain lengths than the former. These hormones have an effect on the endocrine s ...
signalling from both central and local modulators.

A canaliculus is an adaptation found on gastric parietal cells. It is a deep infolding, or little channel, which serves to increase the surface area, e.g. for secretion. The parietal cell membrane is dynamic; the numbers of canaliculi rise and fall according to secretory need. This is accomplished by the fusion of canalicular precursors, or "tubulovesicles", with the membrane to increase surface area, and the reciprocal endocytosis of the canaliculi (reforming the tubulovesicles) to decrease it.

and water by
carbonic anhydrase

. * The bicarbonate ion (HCO3−) is exchanged for a chloride ion (Cl−) on the basal side of the cell and the bicarbonate diffuses into the venous blood, leading to an alkaline tide phenomenon. * Potassium (K+) and chloride (Cl−) ions diffuse into the Parietal cell#Canaliculus, canaliculi. * Hydrogen ions are pumped out of the cell into the canaliculi in exchange for potassium ions, via the hydrogen potassium ATPase, H+/K+ ATPase. These receptors are increased in number on lumenal side by fusion of tubulovesicles during activation of parietal cells and removed during deactivation. This receptor maintains a million-fold difference in proton concentration. ATP is provided by the numerous mitochondria. 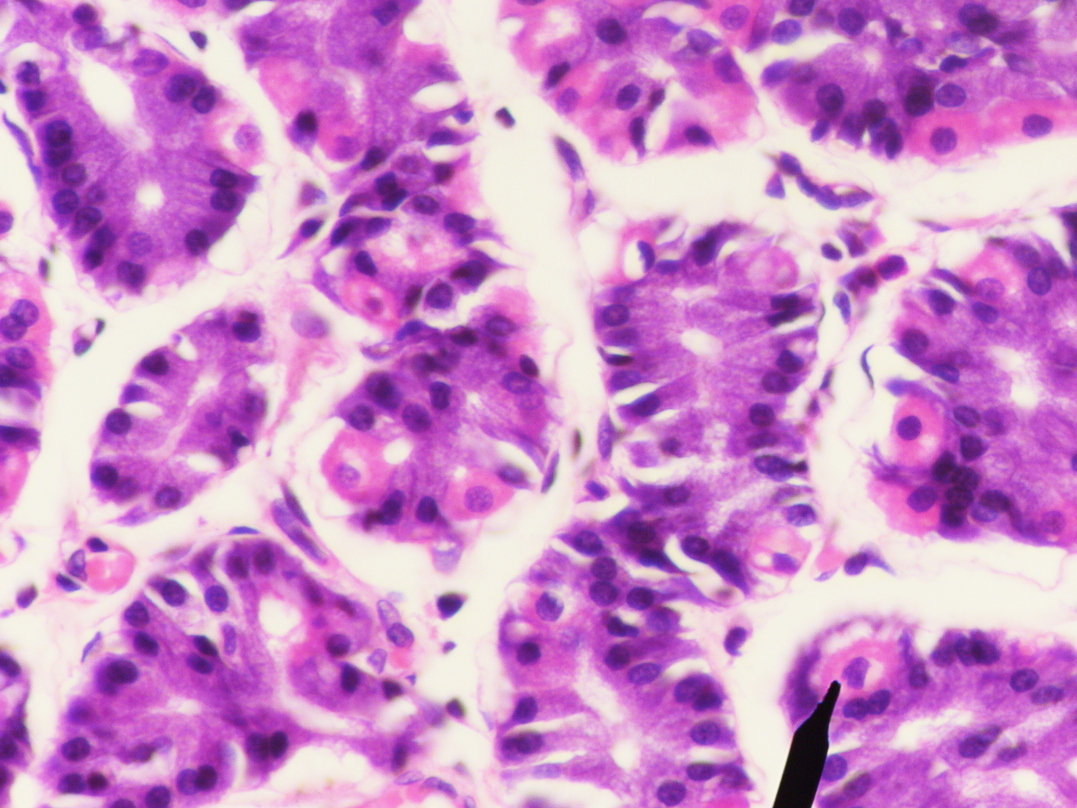 As a result of the cellular export of hydrogen ions, the gastric lumen is maintained as a highly acidic environment. The acidity aids in digestion of food by promoting the unfolding (or Denaturation (biochemistry), denaturing) of ingested proteins. As proteins unfold, the peptide bonds linking component amino acids are exposed. Gastric HCl simultaneously cleaves pepsinogen, a zymogen, into active pepsin, an endopeptidase that advances the digestive process by breaking the now-exposed peptide bonds, a process known as proteolysis.

Parietal cells also produce a glycoprotein known as intrinsic factor. Intrinsic factor is required for the absorption of Vitamin B12, vitamin B in the diet. A long-term Vitamin B12 deficiency, deficiency in vitamin B12 can lead to megaloblastic anemia, characterized by large fragile red blood cells. Pernicious anaemia results from autoimmune destruction of gastric parietal cells, precluding the synthesis of intrinsic factor and, by extension, absorption of Vitamin B12. Pernicious anemia also leads to megaloblastic anemia. Atrophic gastritis, particularly in the elderly, will cause an inability to absorb B12 and can lead to deficiencies such as decreased DNA synthesis and nucleotide metabolism in the bone marrow. 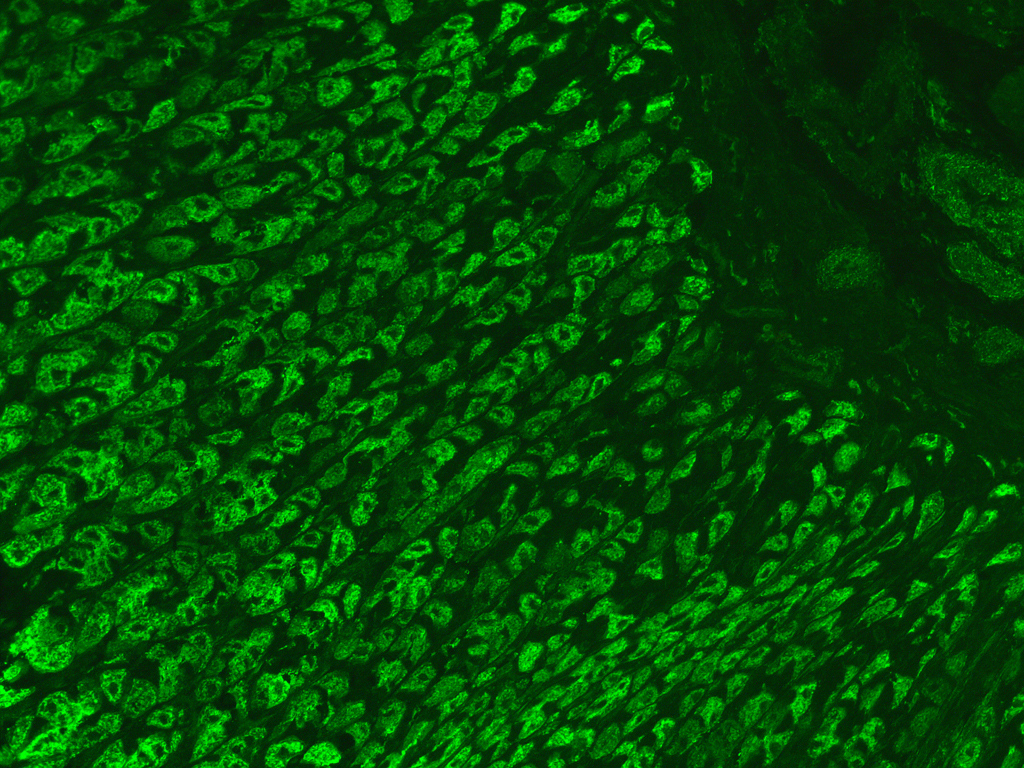 * ''Peptic ulcers'' can result from over-acidity in the stomach. Antacids can be used to enhance the natural tolerance of the gastric lining. Antimuscarinic drugs such as pirenzepine or H2 antihistamines can reduce acid secretion. Proton pump inhibitors are more potent at reducing gastric acid production since that is the final common pathway of all stimulation of acid production. * In ''pernicious anemia'', autoantibody, autoantibodies directed against parietal cells or intrinsic factor cause a reduction in vitamin B12 absorption. It can be treated with injections of replacement vitamin B12 (methylcobalamin, hydroxocobalamin or cyanocobalamin). * ''Achlorhydria'' is another autoimmune disease of the parietal cells. The damaged parietal cells are unable to produce the required amount of gastric acid. This leads to an increase in gastric pH, impaired digestion of food and increased risk of gastroenteritis.


Illustration of Chief cells and Parietal cells at anatomyatlases.org