The Vatican Museums ( it|Musei Vaticani; la|Musea Vaticana) are the public art and sculpture museums in the Vatican City. They display works from the immense collection amassed by the Catholic Church and the papacy throughout the centuries including several of the most renowned Roman sculptures and most important masterpieces of Renaissance art in the world. The museums contain roughly 70,000 works, of which 20,000 are on display, and currently employ 640 people who work in 40 different administrative, scholarly, and restoration departments. Pope Julius II founded the museums in the early 16th century. The Sistine Chapel with its ceiling decorated by Michelangelo and the Stanze di Raffaello decorated by Raphael are on the visitor route through the Vatican Museums. In 2020 they were visited by 1,300,00 persons, a drop of 81 percent from the number of visitors in 2019, but enough to rank them fourth among the most visited art museums in the world. There are 54 galleries, or ''sale'', in total, with the Sistine Chapel, notably, being the last sala within the Museum. 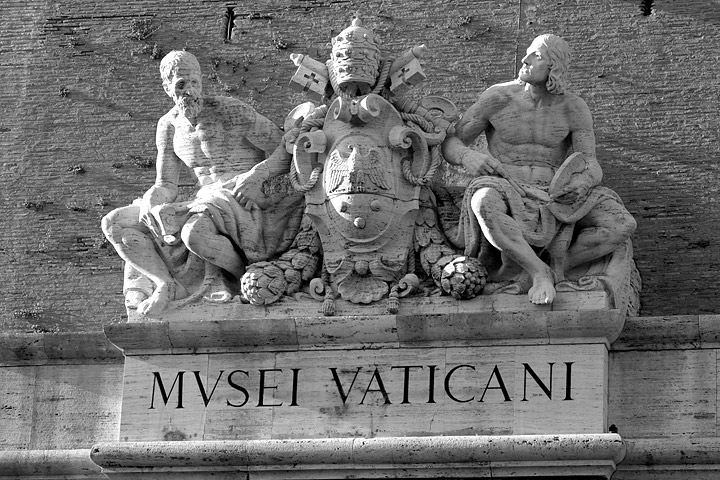 The Vatican Museums trace their origin to one marble sculpture, purchased in the 16th century: ''Laocoön and His Sons'' was discovered on 14 January 1506, in a vineyard near the basilica of Santa Maria Maggiore in Rome. Pope Julius II sent Giuliano da Sangallo and Michelangelo Buonarroti, who were working at the Vatican, to examine the discovery. On their recommendation, the pope immediately purchased the sculpture from the vineyard owner. The pope put the sculpture, which depicts the Trojan priest Laocoön and his two sons being attacked by giant serpents, on public display at the Vatican exactly one month after its discovery. Benedict XIV founded the ''Museum Christianum'', and some of the Vatican collections formed the Lateran Museum, which Pius IX founded by decree in 1854. The Museums celebrated their 500th anniversary in October 2006 by permanently opening the excavations of a Vatican Hill necropolis to the public. On 1 January 2017, Barbara Jatta became the Director of the Vatican Museums, replacing Antonio Paolucci who had been director since 2007.

The group of museums includes several sculpture museums surrounding the Cortile del Belvedere. These are the Gregoriano Profano Museum, with classical sculpture, and others as below:

thumb|A Roman naval bireme_depicted_in_a_[[relief_from_the_Temple_of_[[Fortuna_(mythology).html" style="text-decoration: none;"class="mw-redirect" title="relief.html" style="text-decoration: none;"class="mw-redirect" title="bireme depicted in a bireme_depicted_in_a_[[relief_from_the_Temple_of_[[Fortuna_(mythology)">Fortuna_Primigenia_in_[[Praeneste.html" style="text-decoration: none;"class="mw-redirect" title="relief">bireme depicted in a [[relief from the Temple of [[Fortuna (mythology)">Fortuna Primigenia in [[Praeneste">relief">bireme depicted in a [[relief from the Temple of [[Fortuna (mythology)">Fortuna Primigenia in [[Praeneste ([[Palestrina]]), constructed c. 120 BC; exhibited in the [[Pio-Clementino Museum]] of the Vatican.]] The museum takes its name from two popes; [[Pope Clement XIV|Clement XIV]], who established the museum, and [[Pius VI]], the pope who brought the museum to completion. Clement XIV came up with the idea of creating a new museum in Innocent VIII's Belvedere Palace and started the refurbishment work. Pope Clement XIV founded the Pio-Clementino museum in 1771, and originally it contained the Renaissance and antique works. The museum and collection were enlarged by Clement's successor Pius VI. Today, the museum houses works of Greek and Roman sculpture. Some notable galleries are: * Greek Cross Gallery (''Sala a Croce Greca''): with the porphyry sarcophagi of Constance and Saint Helen, daughter and mother of Constantine the Great. * Sala Rotonda: shaped like a miniature Pantheon, the room has impressive ancient mosaics on the floors, and ancient statues lining the perimeter, including a gilded bronze statue of Hercules. * Gallery of the Statues (''Galleria delle Statue''): as its name implies, holds various important statues, including ''Sleeping Ariadne'' and the bust of ''Menander''. It also contains the ''Barberini Candelabra''. * Gallery of the Busts (''Galleria dei Busti'') Many ancient busts are displayed. * Cabinet of the Masks (''Gabinetto delle Maschere''). The name comes from the mosaic on the floor of the gallery, found in Villa Adriana, which shows ancient theater masks. Statues are displayed along the walls, including the ''Three Graces''. * Sala delle Muse: houses the statue group of Apollo and the nine muses, uncovered in a Roman villa near Tivoli in 1774, as well as statues by important ancient Greek or Roman sculptors. The centerpiece is the Belvedere Torso, revered by Michelangelo and other Renaissance men. * Sala degli Animali: so named because of the many ancient statues of animals.

This museum was founded in the early 19th century by Pope Pius VII, whose surname before his election as pope was Chiaramonti. The museum consists of a large arched gallery in which are exhibited several statues, sarcophagi and friezes. The New Wing, Braccio Nuovo, built by Raffaele Stern, houses statues including the Augustus of Prima Porta, the ''Doryphoros'', and ''The River Nile''. It is in the Classical style and has a wide arched roof with skylights. The colour scheme is blue-grey and white with a polychrome marble floor. The walls of each side of the gallery have a row of large niches in which stand marble statues. Between the niches are plinths supporting smaller portrait sculptures. The Galeria Lapidaria forms part of the Chiaramonti Museum, and contains over 3,000 stone tablets and inscriptions. It is accessible only with special permission, usually for the purpose of academic study.

Founded by Pope Gregory XVI in 1837, this museum has nine galleries and houses important Etruscan pieces, coming from archaeological excavations. The pieces include vases, sarcophagus, bronzes and the ''Guglielmi Collection''.

This museum houses a large collection of artifacts from Ancient Egypt. Such material includes papyruses, the ''Grassi Collection'', animal mummies, and reproductions of the ''Book of the Dead''. The Gregoriano Egiziano Museum was inaugurated on 2 February 1839 to commemorate the anniversary of Gregory XVI's accession to the papacy. The creation of the Gregoriano Egiziano Museum was particularly close to the pope's heart as he believed the understanding of ancient Egyptian civilisation was vital in terms of its scientific importance as well as its value in understanding the Old Testament. This feeling was expressed in a paper by the museum's first curator, the physiologist and Barnabite, Father Luigi Maria Ungarelli.

The Vatican Historical Museum ( it|Museo storico vaticano) was founded in 1973 at the behest of Pope Paul VI, and was initially hosted in environments under the Square Garden. In 1987, it moved to the main floor of the Apostolic Palace of the Lateran where it opened in March 1991. The Vatican Historical Museum has a unique collection of portraits of the Popes from the 16th century to date, the memorable items of the Papal Military Corps of the 16–17th centuries and old religious paraphernalia related to rituals of the papacy. Also on display on the lower floor are the ''papamobili'' (Popemobiles), carriages and motorcars of Popes and Cardinals, including the first cars used by Popes.

Highlights from the painting collection

Other highlights in the museum

* The red marble papal throne, formerly in the Basilica di San Giovanni in Laterano; * Roman sculpture, tombstones, and inscriptions, including the Early Christian Sarcophagus of Junius Bassus and Dogmatic sarcophagus, and the epitaph of Lucius Cornelius Scipio Barbatus; * The Raphael Rooms with many works by Raphael and his workshop, including the masterpiece ''The School of Athens'' (1509–1511) * The Niccoline Chapel * The Sistine Chapel, including the Sistine Chapel ceiling (gallery) * The Gallery of Maps: topographical maps of the whole of Italy, painted on the walls by friar Ignazio Danti of Perugia, commissioned by Pope Gregory XIII (1572–1585). It remains the world's largest pictorial geographical study. * The frescoes and other works in the Borgia Apartment built for Pope Alexander VI (Borgia). 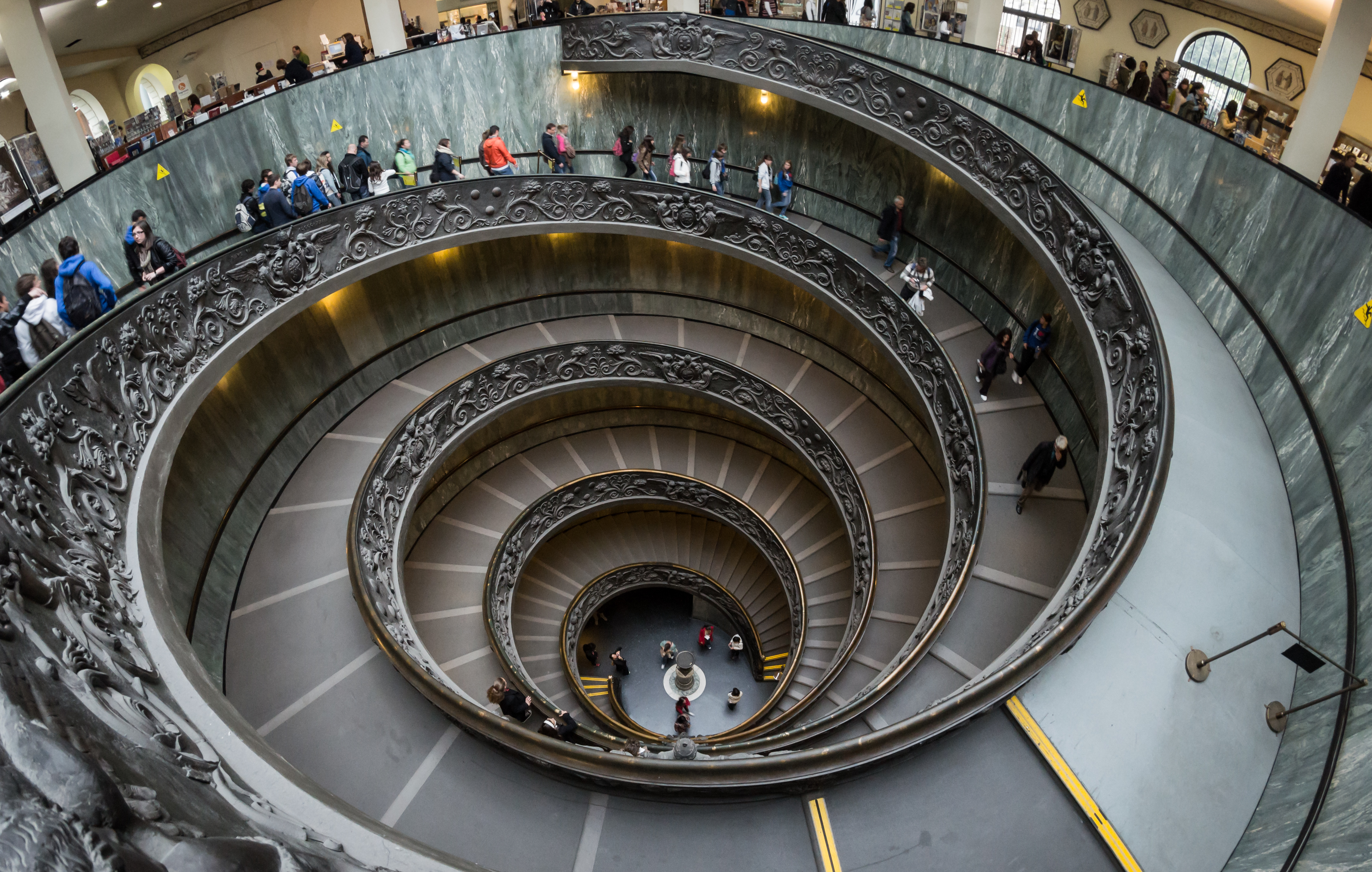 The Bramante Staircase is a double spiral staircase designed by Giuseppe Momo in 1932. The staircase has two parts, a double helix, and is of shallow incline, being a stepped ramp rather than a true staircase. It encircles the outer wall of a stairwell about wide and with a clear space at the centre. The balustrade around the ramp is of ornately worked metal.