Click Here for Items Related To - University of Wisconsin–Madison

The University of Wisconsin–Madison (University of Wisconsin, Wisconsin, UW, UW–Madison, or simply Madison) is a public land-grant research university in Madison, Wisconsin. Founded when Wisconsin achieved statehood in 1848, UW–Madison is the official state university of Wisconsin and the flagship campus of the University of Wisconsin System. It was the first public university established in Wisconsin and remains the oldest and largest public university in the state. It became a land-grant institution in 1866. The main campus, located on the shores of Lake Mendota, includes four National Historic Landmarks. The university also owns and operates a historic arboretum established in 1932, located south of the main campus. UW–Madison is organized into 20 schools and colleges, which enrolled 30,361 undergraduate and 14,052 graduate students in 2018. Its academic programs include 136 undergraduate majors, 148 master's degree programs, and 120 doctoral programs. A major contributor to Wisconsin's economy, the university is the largest employer in the state, with over 21,600 faculty and staff. Wisconsin is a founding member of the Association of American Universities, a selective group of major research universities in North America. It is considered a Public Ivy, and is classified as an R1 University, meaning that it engages in a very high level of research activity. In 2018, it had research and development expenditures of $1.2 billion, the eighth-highest among universities in the U.S. , 26 Nobel laureates, 2 Fields medalists and 1 Turing award winner have been associated with UW–Madison as alumni, faculty, or researchers. Additionally, as of November 2018, the current CEOs of 14 Fortune 500 companies have attended UW–Madison, the most of any university in the United States. Among the scientific advances made at UW–Madison are the single-grain experiment, the discovery of vitamins A and B by Elmer McCollum and Marguerite Davis, the development of the anticoagulant medication warfarin by Karl Paul Link, the first chemical synthesis of a gene by Har Gobind Khorana, the discovery of the retroviral enzyme reverse transcriptase by Howard Temin, and the first synthesis of human embryonic stem cells by James Thomson. UW–Madison was also the home of both the prominent "Wisconsin School" of economics and of diplomatic history, while UW–Madison professor Aldo Leopold played an important role in the development of modern environmental science and conservationism. The Wisconsin Badgers compete in 25 intercollegiate sports in the NCAA Division I Big Ten Conference and have won 28 national championships. Wisconsin students and alumni have won 50 Olympic medals (including 13 gold medals). 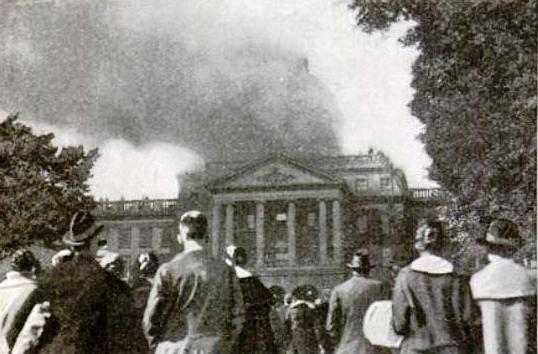 The university had its official beginnings when the Wisconsin Territorial Legislature in its 1838 session passed a law incorporating a "University of the Territory of Wisconsin", and a high-ranking Board of Visitors was appointed. However, this body (the predecessor of the U.W. board of regents) never actually accomplished anything before Wisconsin was incorporated as a state in 1848. The Wisconsin Constitution provided for "the establishment of a state university, at or near the seat of state government..." and directed by the state legislature to be governed by a board of regents and administered by a Chancellor. On July 26, 1848, Nelson Dewey, Wisconsin's first governor, signed the act that formally created the University of Wisconsin. John H. Lathrop became the university's first chancellor, in the fall of 1849. With John W. Sterling as the university's first professor (mathematics), the first class of 17 students met at Madison Female Academy on February 5, 1849. A permanent campus site was soon selected: an area of "bounded north by Fourth lake, east by a street to be opened at right angles with King street", ater State Street"south by Mineral Point Road (University Avenue), and west by a carriage-way from said road to the lake." The regents' building plans called for a "main edifice fronting towards the Capitol, three stories high, surmounted by an observatory for astronomical observations." This building, University Hall, now known as Bascom Hall, was finally completed in 1859. On October 10, 1916, a fire destroyed the building's dome, which was never replaced. North Hall, constructed in 1851, was actually the first building on campus. In 1854, Levi Booth and Charles T. Wakeley became the first graduates of the university, and in 1892 the university awarded its first PhD to future university president Charles R. Van Hise.

Research, teaching, and service at the UW is influenced by a tradition known as "the Wisconsin Idea", first articulated by UW–Madison President Charles Van Hise in 1904, when he declared "I shall never be content until the beneficent influence of the University reaches every home in the state." The Wisconsin Idea holds that the boundaries of the university should be the boundaries of the state, and that the research conducted at UW–Madison should be applied to solve problems and improve health, quality of life, the environment, and agriculture for all citizens of the state. The Wisconsin Idea permeates the university's work and helps forge close working relationships among university faculty and students, and the state's industries and government. Based in Wisconsin's populist history, the Wisconsin Idea continues to inspire the work of the faculty, staff, and students who aim to solve real-world problems by working together across disciplines and demographics.

During World War II, University of Wisconsin was one of 131 colleges and universities nationally that took part in the V-12 Navy College Training Program which offered students a path to a Navy commission. 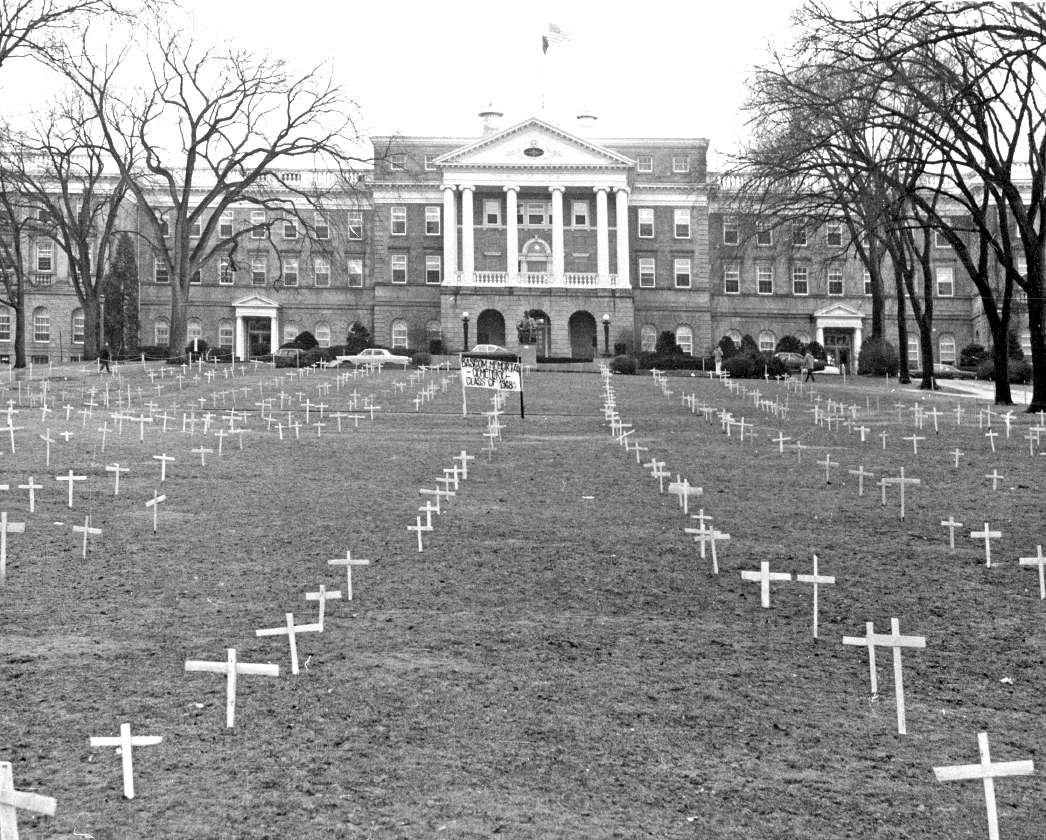 In the late 1960s and early 1970s, UW–Madison was shaken by a series of student protests, and by the use of force by authorities in response, comprehensively documented in the film ''The War at Home''. The first major demonstrations protested the presence on campus of recruiters for the Dow Chemical Company, which supplied the napalm used in the Vietnam War. Authorities used force to quell the disturbance. The struggle was documented in the book, ''They Marched into Sunlight'', as well as the PBS documentary ''Two Days in October''. Among the students injured in the protest was former Madison mayor Paul Soglin. Another target of protest was the Army Mathematics Research Center (AMRC) in Sterling Hall, which was also home of the physics department. The student newspaper, ''The Daily Cardinal'', published a series of investigative articles stating that AMRC was pursuing research directly pursuant to US Department of Defense requests, and supportive of military operations in Vietnam. AMRC became a magnet for demonstrations, in which protesters chanted "U.S. out of Vietnam! Smash Army Math!" On August 24, 1970, near 3:40 am, a bomb exploded next to Sterling Hall, aimed at destroying the Army Math Research Center. Despite the late hour, a post doctoral physics researcher, Robert Fassnacht, was in the lab and was killed in the explosion. The physics department was severely damaged, while the intended target, the AMRC, was scarcely affected. Karleton Armstrong, Dwight Armstrong, and David Fine were found responsible for the blast. Leo Burt was identified as a suspect, but was never apprehended or tried.

Notable moments in the history of the University of Wisconsin–Madison include: * 1863 Female students first admitted to University of Wisconsin during the American Civil War * 1866 State legislature designated the University as the Wisconsin land-grant institution * 1888 Science Hall is constructed, one of the world's first buildings to use I-beams * April 4, 1892 The first edition of the student-run ''The Daily Cardinal'' was published * 1894 State Board of Regents rejected an effort to purge Professor Richard T. Ely for supporting striking printers, issuing the famous "sifting and winnowing" manifesto in defense of academic freedom, later described as "part of Wisconsin's Magna Carta" * 1904–1905 UW Graduate School established * 1905 the University awards the first PhD in chemical engineering ever granted, to Oliver Patterson Watts. * 1907 Wisconsin Union was founded * 1909 William Purdy and Paul Beck wrote ''On, Wisconsin'' the UW–Madison athletic fight song * 1907–1911 The "Single-grain experiment" was conducted by Stephen Moulton Babcock and Edwin B. Hart, paving the way for modern nutrition as a science * 1913 Vitamin A discovered by Elmer V. McCollum and Marguerite Davis * 1916 Vitamin B discovered by McCollum and Davis * 1919 Radio station 9XM founded on campus (Now WHA (970 AM). It is the oldest continually operating radio station in the United States) * 1923 Harry Steenbock invented process for adding vitamin D to milk * 1925 Wisconsin Alumni Research Foundation chartered to control patenting and patent income on UW–Madison inventions * 1934 The University of Wisconsin–Madison Arboretum, whose mission was to restore lost landscapes, such as prairies, was opened * 1936 UW–Madison began an artist-in-residence program, the first ever at a university, with John Steuart Curry * 1940–1951 Warfarin (Coumadin) developed at UW. Named after Wisconsin Alumni Research Foundation * 1969 ''The Badger Herald'' was founded as a conservative student paper * 1969 UW–Madison's Howard Temin (Virologist) co-discovers the enzyme reverse transcriptase * 1970 Sterling Hall bombing * 1984 University Research Park founded to encourage technology transfer between university and businesses * 1998 UW–Madison's James Thomson first isolated and cultured human embryonic stem cells * 2020 In response to an ongoing pandemic of coronavirus disease 2019 and amidst a statewide public health emergency declaration, UW–Madison suspends in-person instruction from March 23 until at least the end of the summer term, shifting courses online and drastically reducing campus operations. 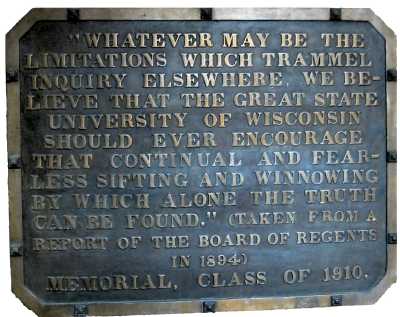 The University of Wisconsin–Madison, the flagship campus of the University of Wisconsin System, is a large, four-year research university comprising twenty associated colleges and schools. In addition to undergraduate and graduate divisions in agriculture and life sciences, business, education, engineering, human ecology, journalism and mass communication, letters and science, music, nursing, pharmacy, and social welfare, the university also maintains graduate and professional schools in environmental studies, law, library and information studies, medicine and public health (School of Medicine and Public Health), public affairs, and veterinary medicine. The four year, full-time undergraduate instructional program is classified by the Carnegie Foundation for the Advancement of Teaching as "arts and science plus professions" with a high graduate coexistence; admissions are characterized as "more selective, lower transfer-in." The largest university college, the College of Letters and Science, enrolls approximately half of the undergraduate student body and is made up of 38 departments and five professional schools that instruct students and carry out research in a wide variety of fields, such as astronomy, economics, geography, history, linguistics, and zoology. The graduate instructional program is classified by Carnegie as "comprehensive with medical/veterinary." In 2008, it granted the third largest number of doctorates in the nation.

UW-Madison's undergraduate program was ranked tied for 42nd among national universities by ''U.S. News & World Report'' for 2021 and tied for 13th among public colleges and universities. The same publication ranked UW's graduate Wisconsin School of Business tied for 42nd.