Click Here for Items Related To - US Federal Reserve


The Federal Reserve System (also known as the Federal Reserve or simply the Fed) is the central banking system of the United States of America. It was created on December 23, 1913, with the enactment of the Federal Reserve Act, after a series of financial panics (particularly the panic of 1907) led to the desire for central control of the monetary system in order to alleviate financial crises. Over the years, events such as the Great Depression in the 1930s and the Great Recession during the 2000s have led to the expansion of the roles and responsibilities of the Federal Reserve System. The U.S. Congress established three key objectives for monetary policy in the Federal Reserve Act: maximizing employment, stabilizing prices, and moderating long-term interest rates. The first two objectives are sometimes referred to as the Federal Reserve's dual mandate. Its duties have expanded over the years, and currently also include supervising and regulating banks, maintaining the stability of the financial system, and providing financial services to depository institutions, the U.S. government, and foreign official institutions. The Fed also conducts research into the economy and provides numerous publications, such as the Beige Book and the FRED database. The Federal Reserve System is composed of several layers. It is governed by the presidentially appointed board of governors or Federal Reserve Board (FRB). Twelve regional Federal Reserve Banks, located in cities throughout the nation, regulate and oversee privately owned commercial banks. Nationally chartered commercial banks are required to hold stock in, and can elect some of the board members of, the Federal Reserve Bank of their region. The Federal Open Market Committee (FOMC) sets monetary policy. It consists of all seven members of the board of governors and the twelve regional Federal Reserve Bank presidents, though only five bank presidents vote at a time (the president of the New York Fed and four others who rotate through one-year voting terms). There are also various advisory councils. Thus, the Federal Reserve System has both public and private components. It has a structure unique among central banks, and is also unusual in that the United States Department of the Treasury, an entity outside of the central bank, prints the currency used. The federal government sets the salaries of the board's seven governors, and it receives all the system's annual profits, after dividends on member banks' capital investments are paid, and an account surplus is maintained. In 2015, the Federal Reserve earned a net income of $100.2 billion and transferred $97.7 billion to the U.S. Treasury. Although an instrument of the US Government, the Federal Reserve System considers itself "an independent central bank because its monetary policy decisions do not have to be approved by the President or anyone else in the executive or legislative branches of government, it does not receive funding appropriated by Congress, and the terms of the members of the board of governors span multiple presidential and congressional terms."

The primary declared motivation for creating the Federal Reserve System was to address banking panics. Other purposes are stated in the Federal Reserve Act, such as "to furnish an elastic currency, to afford means of rediscounting commercial paper, to establish a more effective supervision of banking in the United States, and for other purposes". Before the founding of the Federal Reserve System, the United States underwent several financial crises. A particularly severe crisis in 1907 led Congress to enact the Federal Reserve Act in 1913. Today the Federal Reserve System has responsibilities in addition to stabilizing the financial system. Current functions of the Federal Reserve System include: * To address the problem of banking panics * To serve as the central bank for the United States * To strike a balance between private interests of banks and the centralized responsibility of government ** To supervise and regulate banking institutions ** To protect the credit rights of consumers * To manage the nation's money supply through monetary policy to achieve the sometimes-conflicting goals of ** maximum employment ** stable prices, including prevention of either inflation or deflation ** moderate long-term interest rates * To maintain the stability of the financial system and contain systemic risk in financial markets * To provide financial services to depository institutions, the U.S. government, and foreign official institutions, including playing a major role in operating the nation's payments system ** To facilitate the exchange of payments among regions ** To respond to local liquidity needs * To strengthen U.S. standing in the world economy

Addressing the problem of bank panics

Banking institutions in the United States are required to hold reservesamounts of currency and deposits in other banksequal to only a fraction of the amount of the bank's deposit liabilities owed to customers. This practice is called fractional-reserve banking. As a result, banks usually invest the majority of the funds received from depositors. On rare occasions, too many of the bank's customers will withdraw their savings and the bank will need help from another institution to continue operating; this is called a bank run. Bank runs can lead to a multitude of social and economic problems. The Federal Reserve System was designed as an attempt to prevent or minimize the occurrence of bank runs, and possibly act as a lender of last resort when a bank run does occur. Many economists, following Nobel laureate Milton Friedman, believe that the Federal Reserve inappropriately refused to lend money to small banks during the bank runs of 1929; Friedman argued that this contributed to the Great Depression.

In the United States, the Federal Reserve serves as the lender of last resort to those institutions that cannot obtain credit elsewhere and the collapse of which would have serious implications for the economy. It took over this role from the private sector "clearing houses" which operated during the Free Banking Era; whether public or private, the availability of liquidity was intended to prevent bank runs.

Through its discount window and credit operations, Reserve Banks provide liquidity to banks to meet short-term needs stemming from seasonal fluctuations in deposits or unexpected withdrawals. Longer-term liquidity may also be provided in exceptional circumstances. The rate the Fed charges banks for these loans is called the discount rate (officially the primary credit rate). By making these loans, the Fed serves as a buffer against unexpected day-to-day fluctuations in reserve demand and supply. This contributes to the effective functioning of the banking system, alleviates pressure in the reserves market and reduces the extent of unexpected movements in the interest rates. For example, on September 16, 2008, the Federal Reserve Board authorized an $85 billion loan to stave off the bankruptcy of international insurance giant American International Group (AIG).

In its role as the central bank of the United States, the Fed serves as a banker's bank and as the government's bank. As the banker's bank, it helps to assure the safety and efficiency of the payments system. As the government's bank or fiscal agent, the Fed processes a variety of financial transactions involving trillions of dollars. Just as an individual might keep an account at a bank, the U.S. Treasury keeps a checking account with the Federal Reserve, through which incoming federal tax deposits and outgoing government payments are handled. As part of this service relationship, the Fed sells and redeems U.S. government securities such as savings bonds and Treasury bills, notes and bonds. It also issues the nation's coin and paper currency. The U.S. Treasury, through its Bureau of the Mint and Bureau of Engraving and Printing, actually produces the nation's cash supply and, in effect, sells the paper currency to the Federal Reserve Banks at manufacturing cost, and the coins at face value. The Federal Reserve Banks then distribute it to other financial institutions in various ways. During the Fiscal Year 2013, the Bureau of Engraving and Printing delivered 6.6 billion notes at an average cost of 5.0 cents per note.

The Federal Reserve regulates private banks. The system was designed out of a compromise between the competing philosophies of privatization and government regulation. In 2006 Donald L. Kohn, vice chairman of the board of governors, summarized the history of this compromise: The balance between private interests and government can also be seen in the structure of the system. Private banks elect members of the board of directors at their regional Federal Reserve Bank while the members of the board of governors are selected by the President of the United States and confirmed by the Senate. 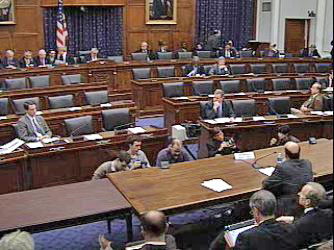 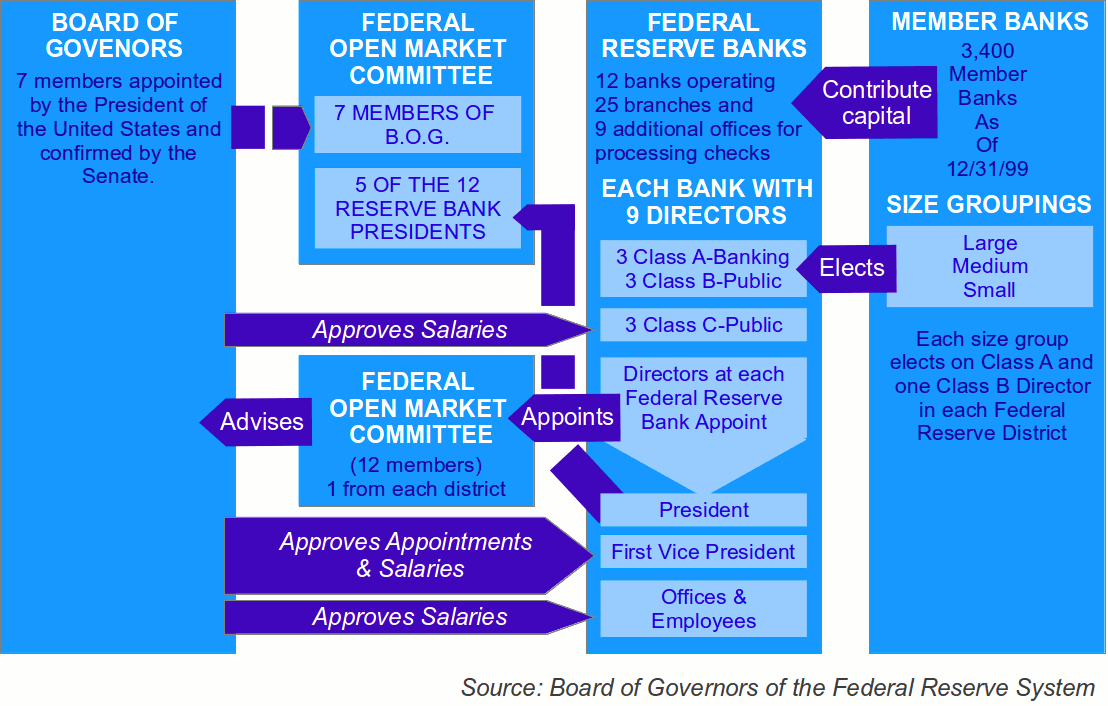 The seven-member board of governors is a large federal agency that functions in business oversight by examining national banks. It is charged with the overseeing of the 12 District Reserve Banks and setting national monetary policy. It also supervises and regulates the U.S. banking system in general. Governors are appointed by the President of the United States and confirmed by the Senate for staggered 14-year terms. One term begins every two years, on February 1 of even-numbered years, and members serving a full term cannot be renominated for a second term.