Click Here for Items Related To - Transport in Botswana

Transportation in Botswana is provided by internal and extensive network of railways, highways, ferry services and air routes that criss-cross the country.

Over half of BRs freight traffic is in coal, grain and intermodal freight, and it also ships automative parts and assembled automobiles, sulphur, fertilizers, other chemicals, soda ash, forest products and other types of the commodities.

In Botswana, the (Botswana Railways) "BR Express" has a commuter train between Lobatse and Gaborone. The train is scheduled to depart in Lobatse at 0530hrs and arrive at Gaborone 0649hrs. This train return to Lobatse in the evening, well departing in Gaborone at 1800hrs. Arrival time at Lobatse is 1934hrs. The train stops at Otse, Ramotswa and Commerce Park Halt.

The BR decided from the very beginning that it would operate its own sleeping cars. Bigger - sized berths and more comfortable surroundings were built. Providing and operating their own cars allowed better control of the service provided as well as revenue received, although profit was never a direct result of providing food to passengers. Rather, it was for those who could afford to travel great distances expected such facilities and favourable opinion would - well attracting others to Botswana and the BR's trains. 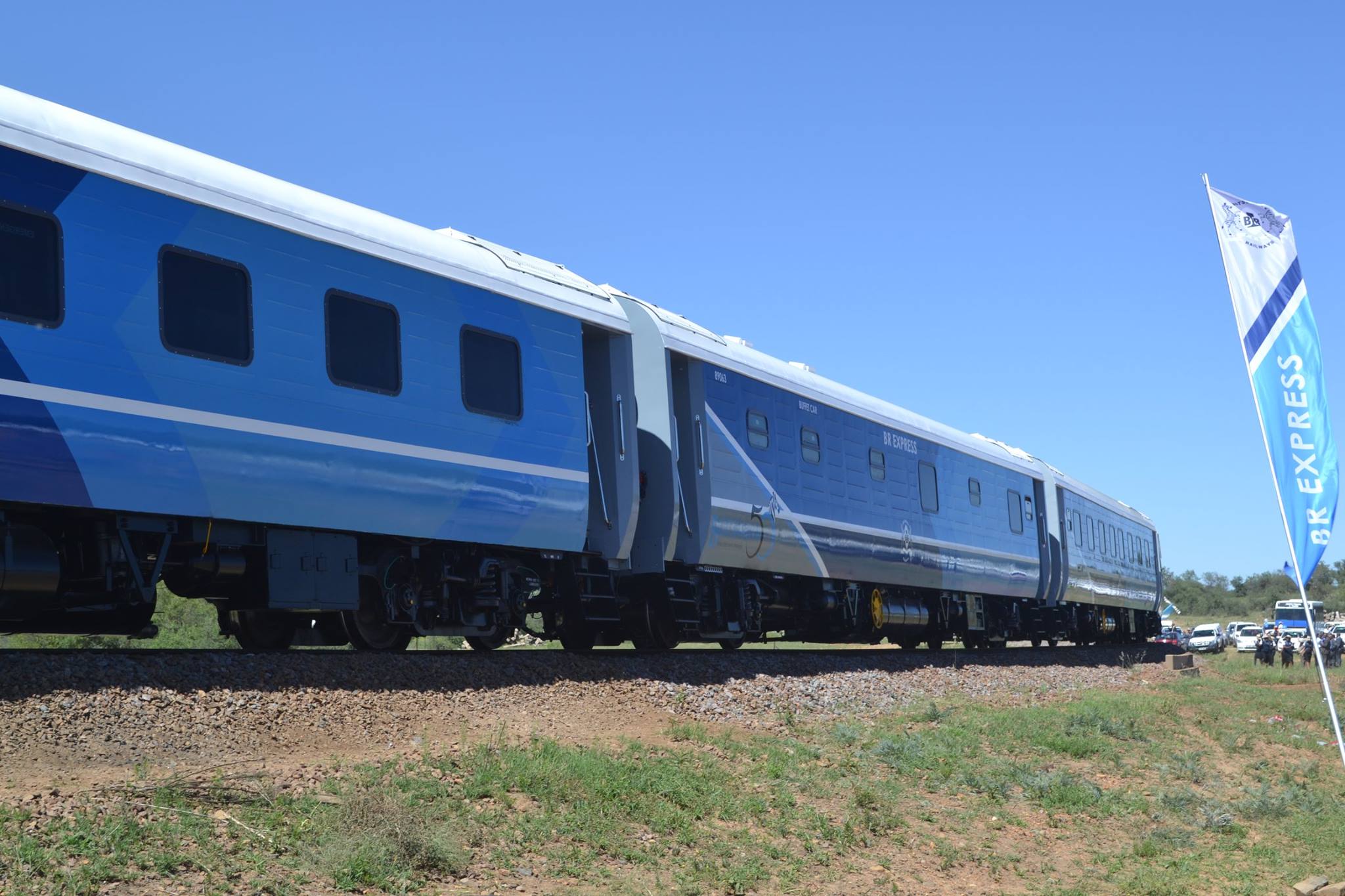 *Botswana had 584,000 locally registered vehicles at the end of June 2019 - more than double the number from 10 years ago. This equates to around 250 vehicles per 1,000 people in the country. *30,583 vehicles were registered in the first 6 months of 2019. *Second hand imports from Asia (and the UK) are a significant source of vehicles in Botswana. 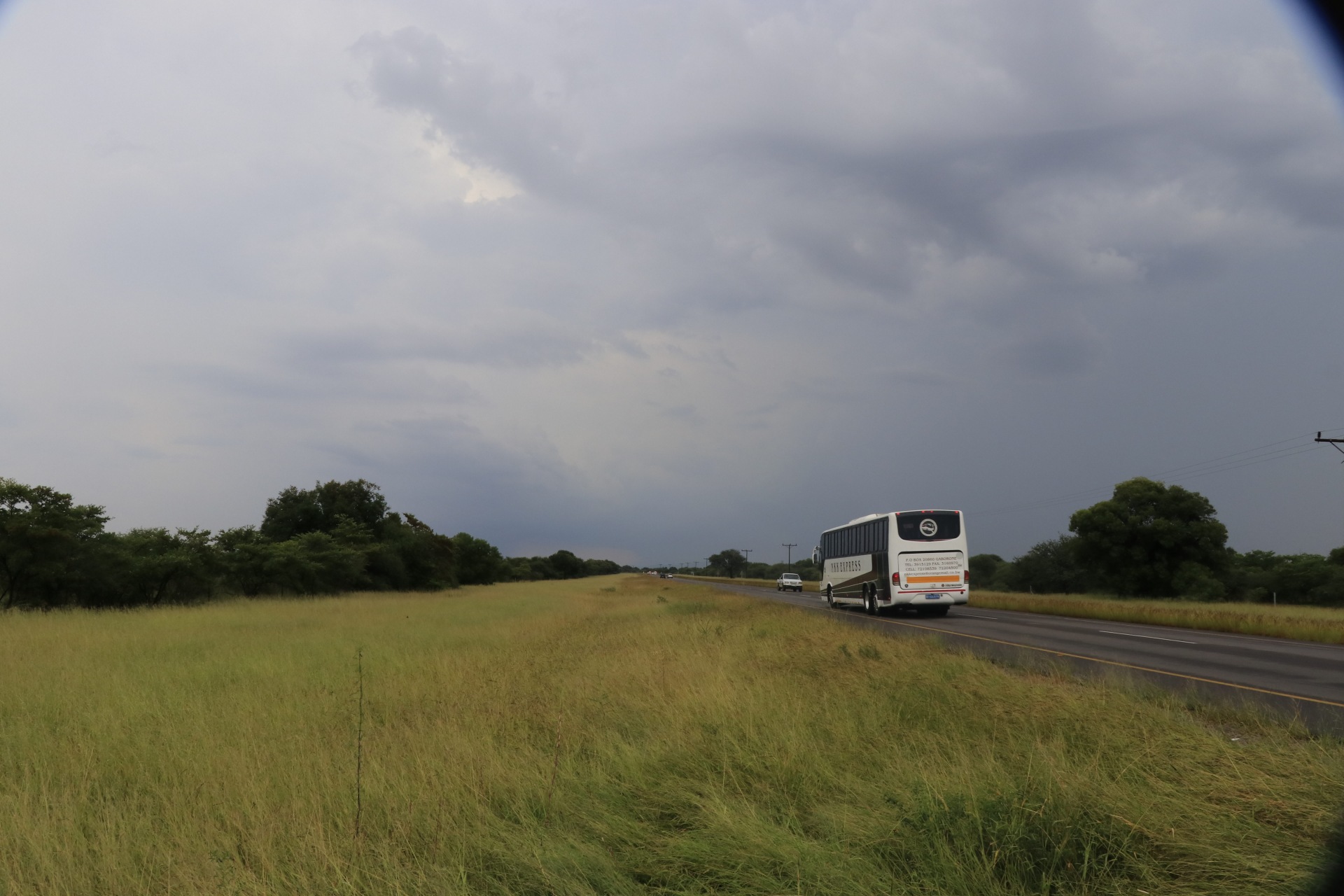 FEATURES REGULATIONS Motorways in Botswana have a set of restrictions, which prohibit certain traffic from using the road. The following classes of traffic are not allowed on Botswana motorways: *Learner drivers *Slow vehicles (i.e. not capable of reaching 60 km/h on a level road). *Invaild carriages (lightweight three-wheeled vehicles) *Pedestrians *Pedal-cycles (bicycles, etc.) *Vehicles under 50cc (e.g. mopeds) *Tractors *Animals Rules for driving on motorways include the following: *The keep-left rule applies unless overtaking *No stopping at any time *No reversing *No hitchhicking *Only vehicles that travel faster than 80 km/h may use the outside lane *No driving on the hard-shoulder The general motorway speed limit is 120 km/h.

Traditionally, road signs in Botswana used blue backgrounds rather than the yellow, white, or orange that the rest of the world uses on traffic warning signs. In the early 2010s, officials announced plans to begin phasing out the distinctive blue signs in favor of more typical signs in order to be more in line with the neighboring Southern African Development Community member states.

Existing * Thapama Interchange at the junction of A1 highway (Botswana), A1 / Blue Jacket Street and A3 road (Botswana), A3 in Francistown. * Boatle Interchange in Boatle. Under-construction The Government of Botswana is building three (3) interchanges along K.T Motsete Drive (''Western Bypass'') in Gaborone. This project started in August 2019, and deadline date is set 2021.

Botswana will have two (2) longest bridges by span and the following are: Under construction 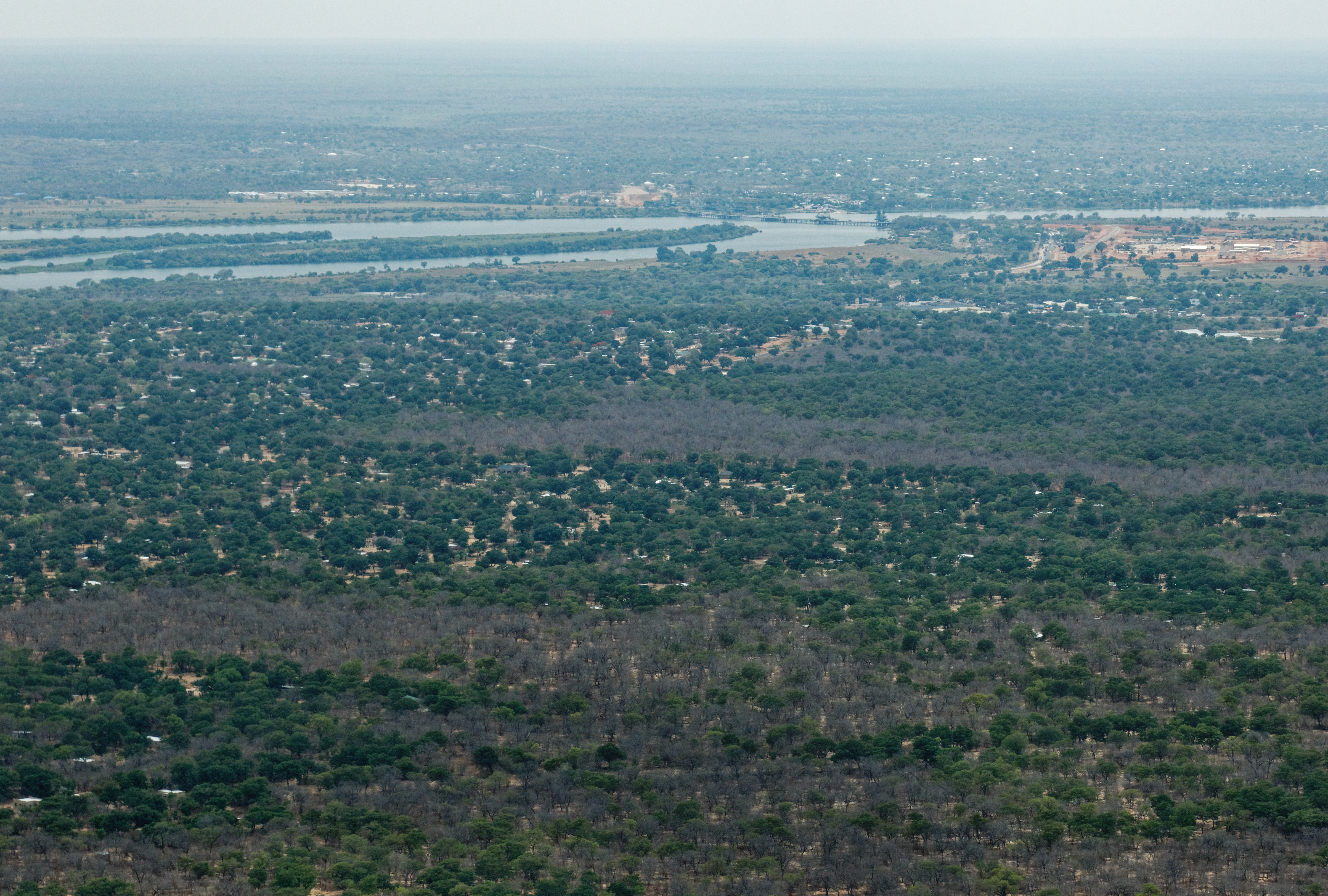 In most parts of Botswana, there are many taxiscabs of various colours and styles. Botswana has no limitation in taxicab design, so each taxiscab company adopts their own design.

Minibus Taxis is also known as ''Kombi'' are the predominant form of transport for people in urban areas of Botswana and mostly of them they're found within cities, towns, major villages and even least populated areas. They also have their own minibus station within that particular area, they only transport people within that specific area, and all of them they have different routes. This is due to their availability and affordability to the public. Most minibus taxis they do not have depart time that's allocated by the state and mostly of them they have 15 seaters. Currently, they're owned by many minibus owners.

Coach buses are used for longer-distance services within and even outside Botswana. They're normally operated by private companies and they're the only ones that have depart time that's allocated by the ministry of transport. All couch buses have different time for depart and they also have different routes, and they also have their couch bus stations all over Botswana.

In 2004 there were an estimated 85 airports, 10 of which (as of 2005), were paved. The country's main international airport is Sir Seretse Khama International Airport in Gaborone. The government-owned Air Botswana operates scheduled flights to Francistown, Gaborone, Maun, Botswana, Maun, and Selebi-Phikwe. There is international service to Johannesburg, South Africa; Mbabane, Swaziland; and Harare, Zimbabwe. A new international airport near Gaborone was opened in 1984. Air passengers arriving to and departing from Botswana during 2003 totalled about 183,000.

Botswana has 4 international airports. The following are: Existing

* Maun Airport in Maun, Botswana, Maun. Proposed * "Mophane International Airport" is yet to be established in Palapye Sub-District near Moremi village.

NSC is a pipeline in Botswana that carries raw water, south for a distance of to the capital city of Gaborone. It was done in phases. However, phase 1 was completed in 2000. Phase 2 of the NSC, still under construction, will duplicate the pipeline to carry water from the Dikgatlhong Dam, which was completed in 2012. A proposed extension to deliver water from the Zambezi would add another to the total pipeline length.

The Lesotho-Botswana Water Transfer is a project which is expected to provide Two Hundred Million Cubic Meters per year, to transfer water to the South-Eastern parts of Botswana is also ongoing. The scheme involves the supply of water to Gaborone from Lesotho via a Six to Seven Hundred kilometer pipeline. The project commenced on the 1 August 2018 and is set for completion in June, 2020. Proposed

The Government of Botswana intends to sign the Sea Water Desalination Project from Namibia. The project is at a tendering stage. 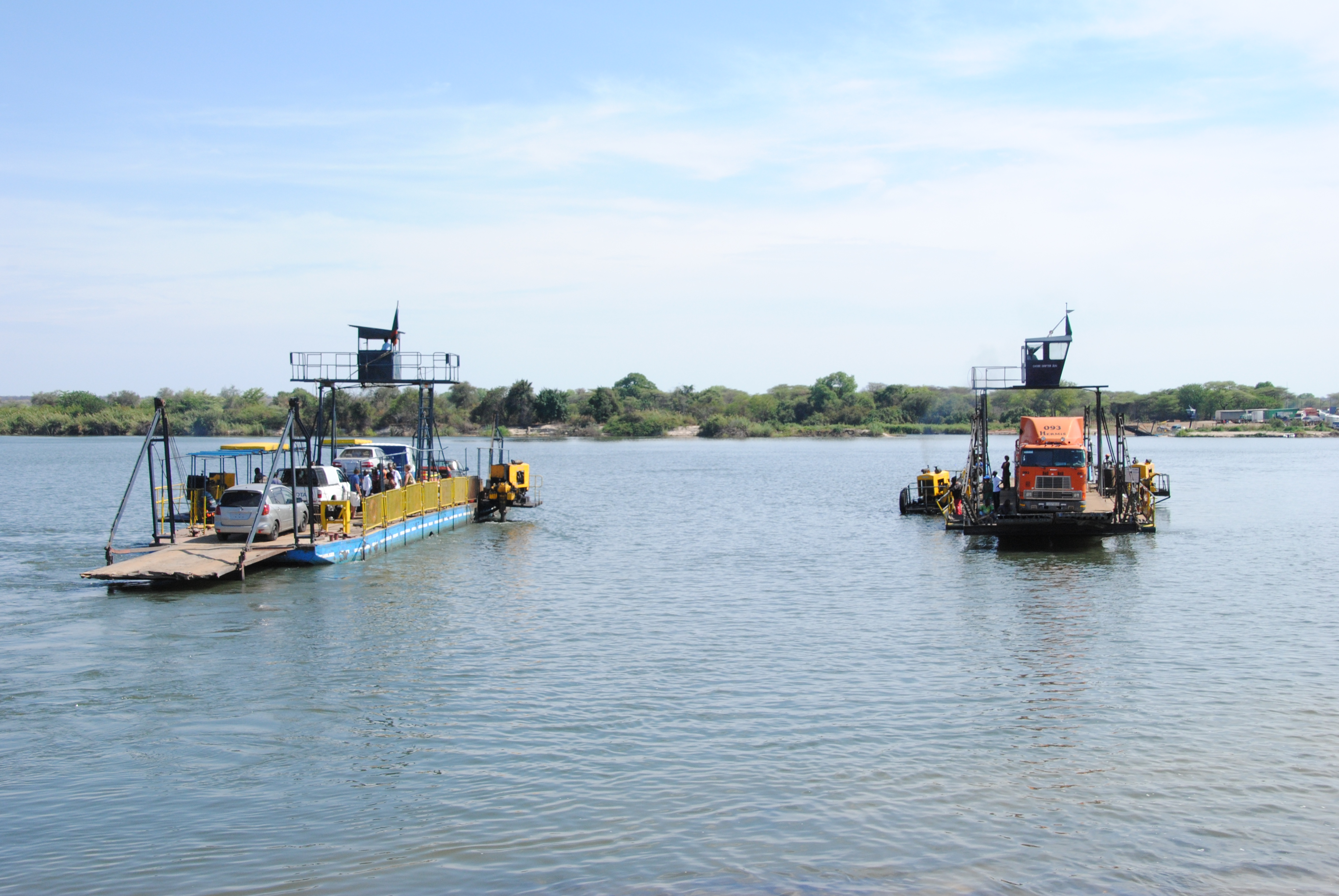 Botswana has many pedestrian elevated walkways at different places.

{{DEFAULTSORT:Transport In Botswana Transport in Botswana,