The Tibetan Plateau (), also known in China as the Qinghai–Tibet Plateau or the Qing–Zang Plateau () or as the Himalayan Plateau in India, is a vast elevated plateau in South Asia, Central Asia and East Asia, covering most of the Tibet Autonomous Region, most of Qinghai, Northwestern Yunnan, Western half of Sichuan, Southern Gansu provinces in Western China, the Indian regions of Ladakh and Lahaul and Spiti (Himachal Pradesh) as well as Bhutan. It stretches approximately north to south and east to west. It is the world's highest and largest plateau above sea level, with an area of (about five times the size of Metropolitan France). With an average elevation exceeding and being surrounded by imposing mountain ranges that harbor the world's two highest summits, Mount Everest and K2, the Tibetan Plateau is often referred to as "the Roof of the World". The Tibetan Plateau contains the headwaters of the drainage basins of most of the streams in surrounding regions. Its tens of thousands of glaciers and other geographical and ecological features serve as a "water tower" storing water and maintaining flow. It is sometimes termed the Third Pole because its ice fields contain the largest reserve of fresh water outside the polar regions. The impact of global warming on the Tibetan Plateau is of intense scientific interest.

The Tibetan Plateau is surrounded by the massive mountain ranges of high-mountain Asia. The plateau is bordered to the south by the inner Himalayan range, to the north by the Kunlun Mountains, which separate it from the Tarim Basin, and to the northeast by the Qilian Mountains, which separate the plateau from the Hexi Corridor and Gobi Desert. To the east and southeast the plateau gives way to the forested gorge and ridge geography of the mountainous headwaters of the Salween, Mekong, and Yangtze rivers in northwest Yunnan and western Sichuan (the Hengduan Mountains). In the west the curve of the rugged Karakoram range of northern Kashmir embraces the plateau. The Indus River originates in the western Tibetan Plateau in the vicinity of Lake Manasarovar. 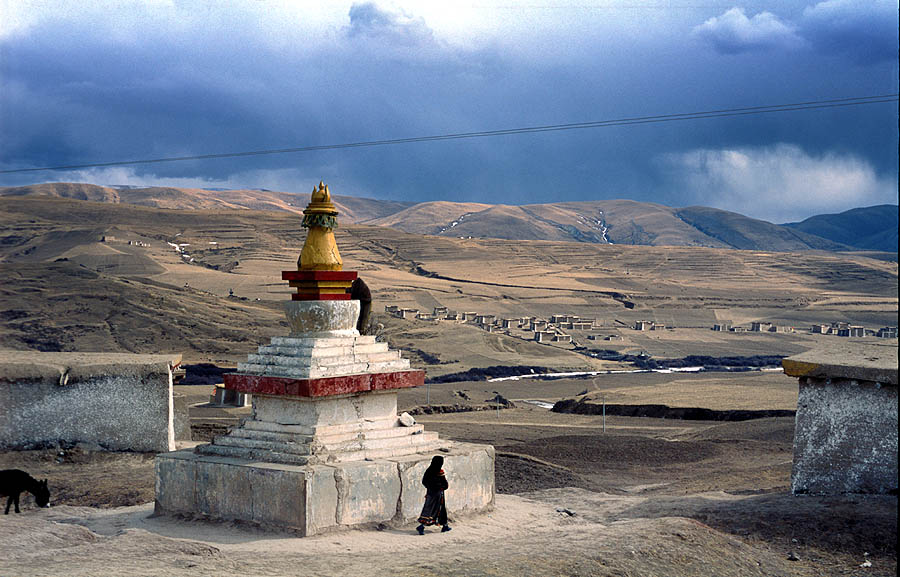 The Tibetan Plateau is bounded in the north by a broad escarpment where the altitude drops from around to over a horizontal distance of less than . Along the escarpment is a range of mountains. In the west, the Kunlun Mountains separate the plateau from the Tarim Basin. About halfway across the Tarim the bounding range becomes the Altyn-Tagh and the Kunluns, by convention, continue somewhat to the south. In the 'V' formed by this split is the western part of the Qaidam Basin. The Altyn-Tagh ends near the Dangjin pass on the Dunhuang–Golmud road. To the west are short ranges called the Danghe, Yema, Shule, and Tulai Nanshans. The easternmost range is the Qilian Mountains. The line of mountains continues east of the plateau as the Qinling, which separates the Ordos Plateau from Sichuan. North of the mountains runs the Gansu or Hexi Corridor which was the main silk-road route from China proper to the West. The plateau is a high-altitude arid steppe interspersed with mountain ranges and large brackish lakes. Annual precipitation ranges from and falls mainly as hail. The southern and eastern edges of the steppe have grasslands that can sustainably support populations of nomadic herdsmen, although frost occurs for six months of the year. Permafrost occurs over extensive parts of the plateau. Proceeding to the north and northwest, the plateau becomes progressively higher, colder, and drier, until reaching the remote Changtang region in the northwestern part of the plateau. Here the average altitude exceeds and winter temperatures can drop to . As a result of this extremely inhospitable environment, the Changthang region (together with the adjoining Kekexili region) is the least populous region in Asia and the third least populous area in the world after Antarctica and northern Greenland. 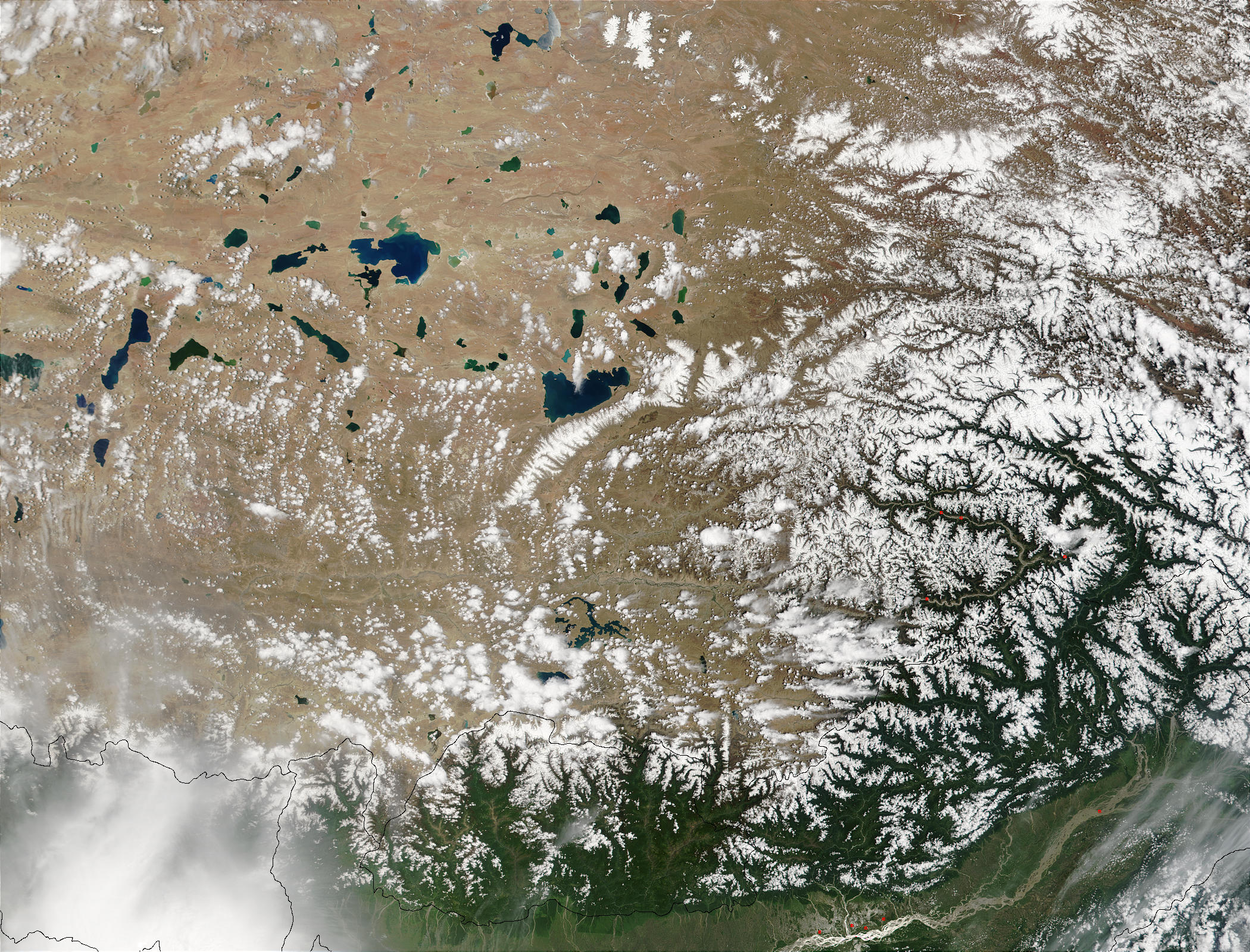 The geological history of the Tibetan Plateau is closely related to that of the Himalayas. The Himalayas belong to the Alpine Orogeny and are therefore among the younger mountain ranges on the planet, consisting mostly of uplifted sedimentary and metamorphic rock. Their formation is a result of a continental collision or orogeny along the convergent boundary between the Indo-Australian Plate and the Eurasian Plate. The collision began in the Upper Cretaceous period about 70 million years ago, when the north-moving Indo-Australian Plate, moving at about per year, collided with the Eurasian Plate. About 50 million years ago, this fast-moving Indo-Australian plate had completely closed the Tethys Ocean, the existence of which has been determined by sedimentary rocks settled on the ocean floor, and the volcanoes that fringed its edges. Since these sediments were light, they crumpled into mountain ranges rather than sinking to the floor. The Indo-Australian plate continues to be driven horizontally below the Tibetan Plateau, which forces the plateau to move upwards; the plateau is still rising at a rate of approximately per year. Much of the Tibetan Plateau is of relatively low relief. The cause of this is debated among geologists. Some argue that the Tibetan Plateau is an uplifted peneplain formed at low altitude, while others argue that the low relief stems from erosion and infill of topographic depressions that occurred at already high elevations. 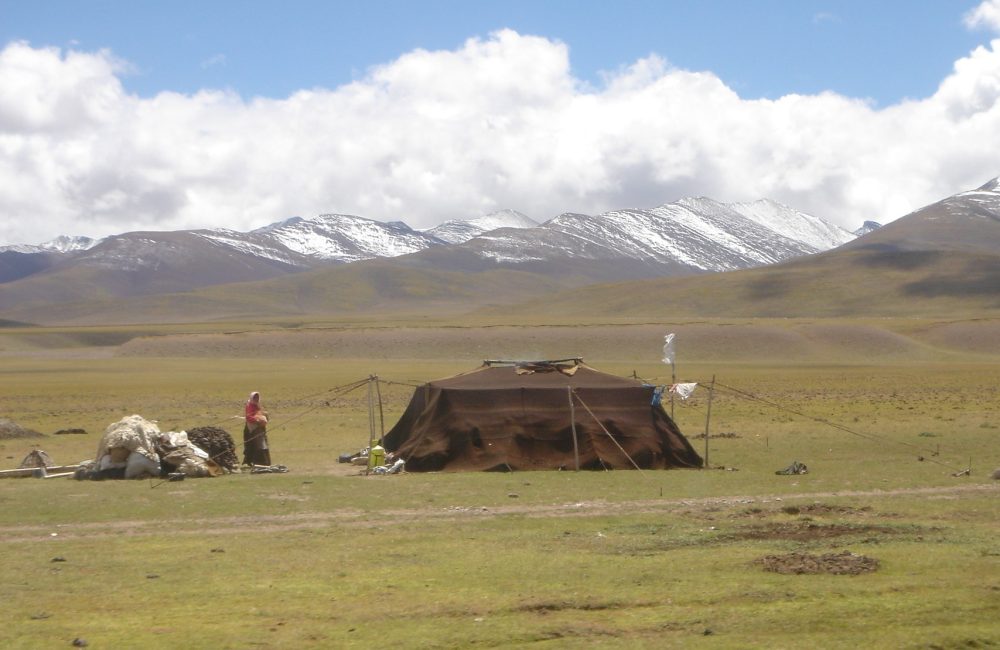 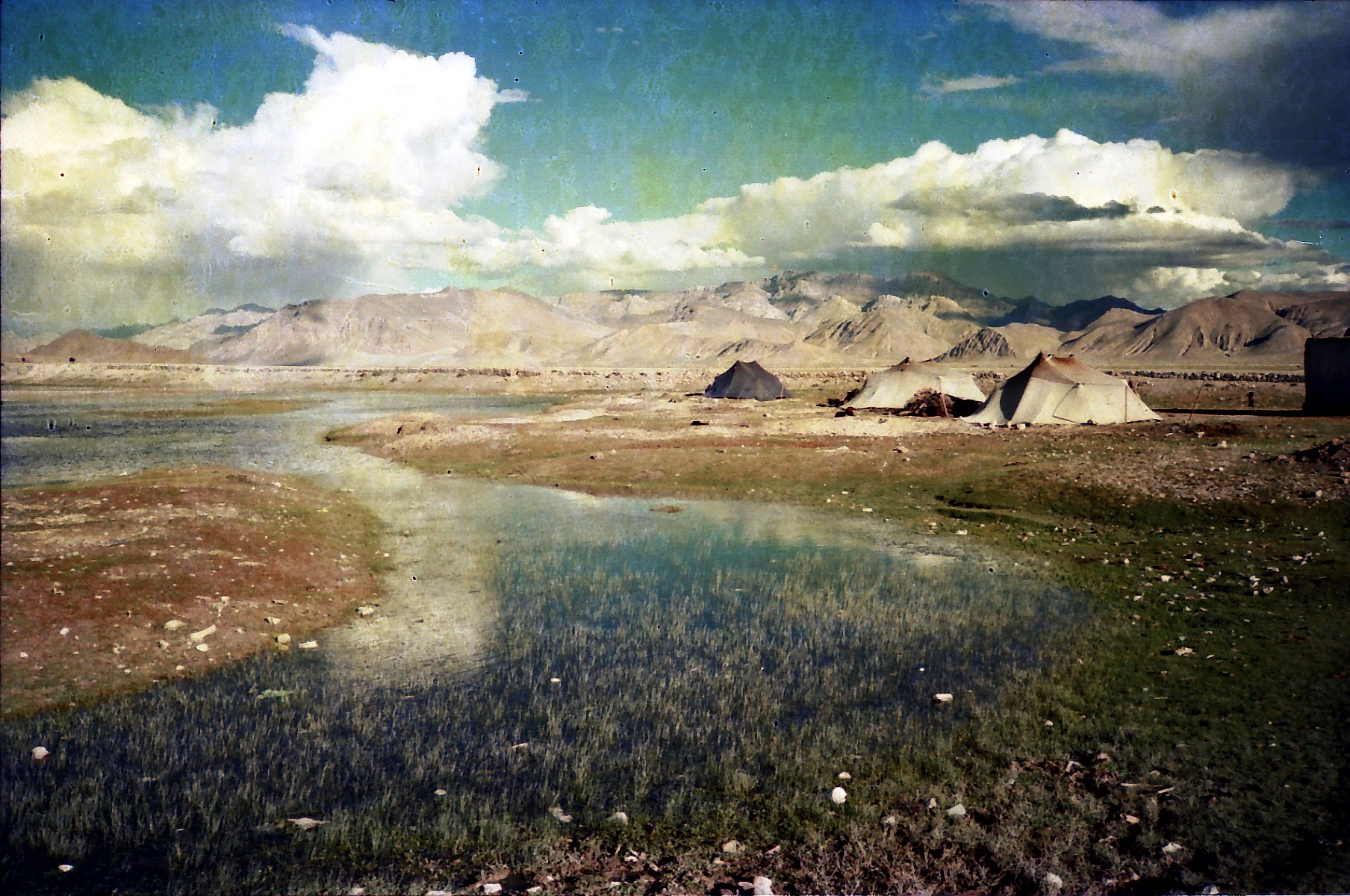 Nomads on the Tibetan Plateau and in the Himalayas are the remainders of nomadic practices historically once widespread in Asia and Africa. Pastoral nomads constitute about 40% of the ethnic Tibetan population. The presence of nomadic peoples on the plateau is predicated on their adaptation to survival on the world's grassland by raising livestock rather than crops, which are unsuitable to the terrain. Archaeological evidence suggests that the earliest human occupation of the plateau occurred between 30,000 and 40,000 years ago. Since colonization of the Tibetan Plateau, Tibetan culture has adapted and flourished in the western, southern, and eastern regions of the plateau. The northern portion, the Changtang, is generally too high and cold to support permanent population. One of the most notable civilizations to have developed on the Tibetan Plateau is the Tibetan Empire from the 7th century to the 9th century AD.


Impact on other regions 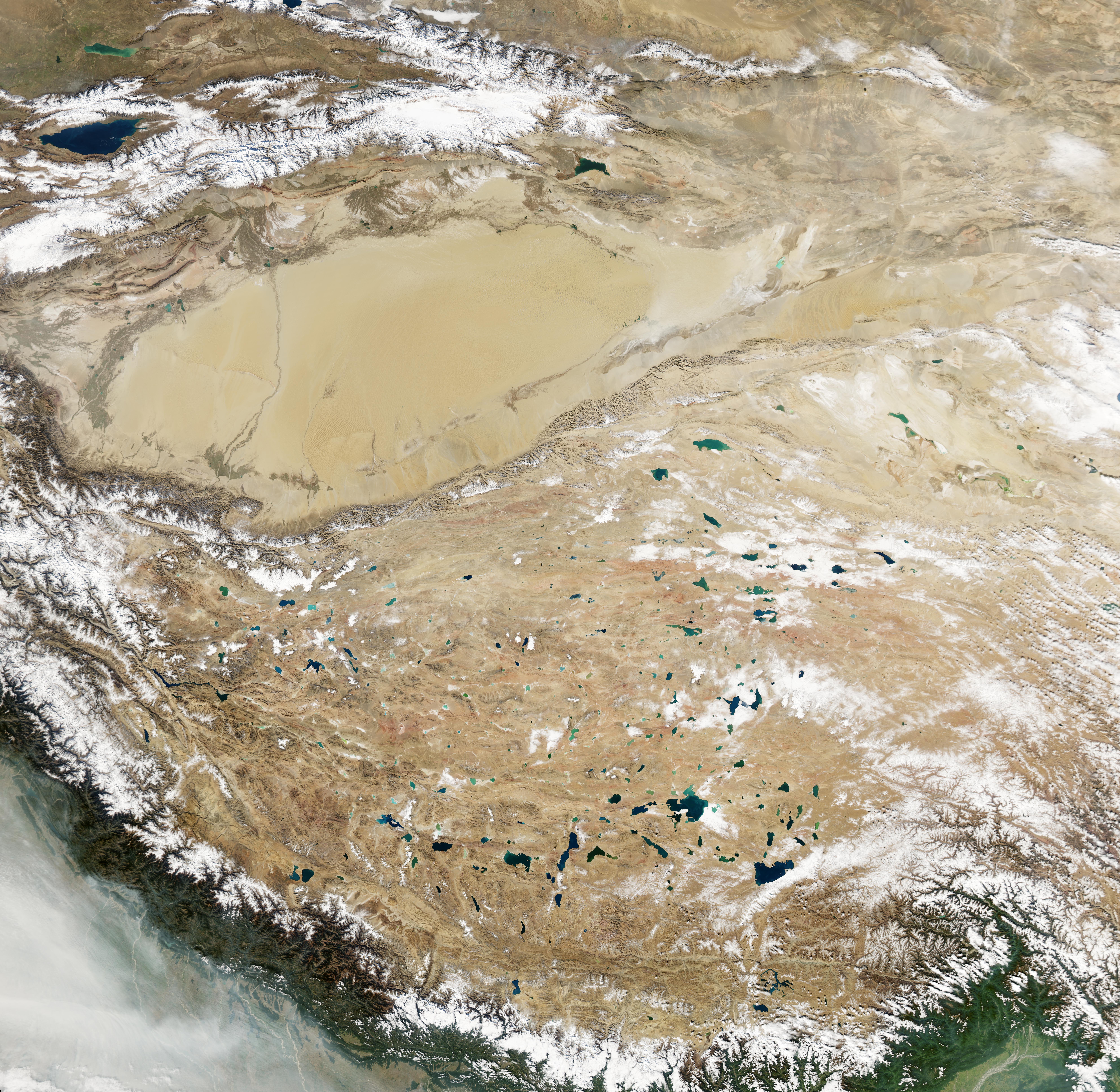 Monsoons are caused by the different amplitudes of surface temperature seasonal cycles between land and oceans. This differential warming occurs because heating rates differ between land and water. Ocean heating is distributed vertically through a "mixed layer" that may be 50 meters deep through the action of wind and buoyancy-generated turbulence, whereas the land surface conducts heat slowly, with the seasonal signal penetrating only a meter or so. Additionally, the specific heat capacity of liquid water is significantly greater than that of most materials that make up land. Together, these factors mean that the heat capacity of the layer participating in the seasonal cycle is much larger over the oceans than over land, with the consequence that the land warms and cools faster than the ocean. In turn, air over the land warms faster and reaches a higher temperature than does air over the ocean. The warmer air over land tends to rise, creating an area of low pressure. The pressure anomaly then causes a steady wind to blow toward the land, which brings the moist air over the ocean surface with it. Rainfall is then increased by the presence of the moist ocean air. The rainfall is stimulated by a variety of mechanisms, such as low-level air being lifted upwards by mountains, surface heating, convergence at the surface, divergence aloft, or from storm-produced outflows near the surface. When such lifting occurs, the air cools due to expansion in lower pressure, which in turn produces condensation and precipitation. In winter, the land cools off quickly, but the ocean maintains the heat longer. The hot air over the ocean rises, creating a low-pressure area and a breeze from land to ocean while a large area of drying high pressure is formed over the land, increased by wintertime cooling. Monsoons are similar to sea and land breezes, a term usually referring to the localized, diurnal cycle of circulation near coastlines everywhere, but they are much larger in scale, stronger and seasonal. The seasonal monsoon wind shift and weather associated with the heating and cooling of the Tibetan plateau is the strongest such monsoon on Earth.

Glaciology: the Ice Age and at present

Today, Tibet is an important heating surface of the atmosphere. However, during the Last Glacial Maximum, an approximately ice sheet covered the plateau. Due to its great extent, this glaciation in the subtropics was an important element of radiative forcing. With a much lower latitude, the ice in Tibet reflected at least four times more radiation energy per unit area into space than ice at higher latitudes. Thus, while the modern plateau heats the overlying atmosphere, during the Last Ice Age it helped to cool it. This cooling had multiple effects on regional climate. Without the thermal low pressure caused by the heating, there was no monsoon over the Indian subcontinent. This lack of monsoon caused extensive rainfall over the Sahara, expansion of the Thar Desert, more dust deposited into the Arabian Sea, and a lowering of the biotic life zones on the Indian subcontinent. Animals responded to this shift in climate, with the Javan rusa migrating into India. In addition, the glaciers in Tibet created meltwater lakes in the Qaidam Basin, the Tarim Basin, and the Gobi Desert, despite the strong evaporation caused by the low latitude. Silt and clay from the glaciers accumulated in these lakes; when the lakes dried at the end of the ice age, the silt and clay were blown by the downslope wind off the Plateau. These airborne fine grains produced the enormous amount of loess in the Chinese lowlands.