Click Here for Items Related To - The Globe and Mail


''The Globe and Mail'' is a Canadian newspaper printed in five cities in western and central Canada. With a weekly readership of 2,018,923 in 2015, it is Canada's most widely read newspaper on weekdays and Saturdays, although it falls slightly behind the ''Toronto Star'' in overall weekly circulation because the ''Star'' publishes a Sunday edition while the ''Globe'' does not. ''The Globe and Mail'' is regarded by some as Canada's "newspaper of record". The newspaper is owned by The Woodbridge Company, based in Toronto.

The predecessor to ''The Globe and Mail'' was called ''The Globe''; it was founded in 1844 by Scottish immigrant George Brown, who became a Father of Confederation. Brown's liberal politics led him to court the support of the Clear Grits, a precursor to the modern Liberal Party of Canada. ''The Globe'' began in Toronto as a weekly party organ for Brown's Reform Party, but seeing the economic gains that he could make in the newspaper business, Brown soon targeted a wide audience of liberal minded freeholders. He selected as the motto for the editorial page a quotation from Junius, "The subject who is truly loyal to the Chief Magistrate will neither advise nor submit to arbitrary measures." The quotation is carried on the editorial page to this day. By the 1850s, ''The Globe'' had become an independent and well-regarded daily newspaper. It began distribution by railway to other cities in Ontario shortly after Confederation. At the dawn of the twentieth century, ''The Globe'' added photography, a women's section, and the slogan "Canada's National Newspaper", which remains on its front-page banner. It began opening bureaus and offering subscriptions across Canada. 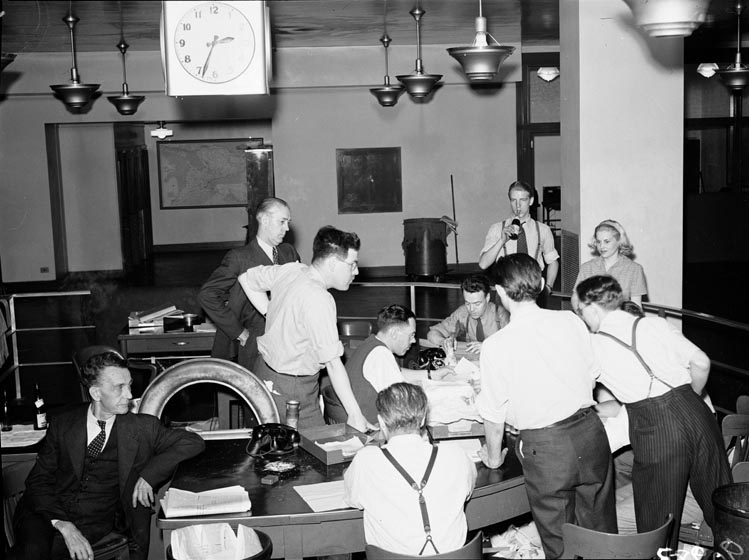 The merger was arranged by George McCullagh, who fronted for mining magnate William Henry Wright and became the first publisher of ''The Globe and Mail''. McCullagh committed suicide in 1952, and the newspaper was sold to the Webster family of Montreal. As the paper lost ground to ''The Toronto Star'' in the local Toronto market, it began to expand its national circulation. The newspaper was unionised in 1955, under the banner of the American Newspaper Guild. From 1937 until 1974, the newspaper was produced at the William H. Wright Building which was located at then 140 King Street West on the northeast corner of King Street and York Street, close to the homes of the ''Toronto Daily Star'' at Old Toronto Star Building at 80 King West and the Old Toronto Telegram Building at Bay and Melinda. The building at 130 King Street West was demolished in 1974 to make way for First Canadian Place, and the newspaper moved to 444 Front Street West, which had been the headquarters of the ''Toronto Telegram'' newspaper, built in 1963.

In 1965, the paper was bought by Winnipeg-based FP Publications, controlled by Bryan Maheswary, which owned a chain of local Canadian newspapers. FP put a strong emphasis on the Report on Business section that was launched in 1962, thereby building the paper's reputation as the voice of Toronto's business community. FP Publications and ''The Globe and Mail'' were sold in 1980 to The Thomson Corporation, a company run by the family of Kenneth Thomson. After the acquisition, there were few changes made in editorial or news policy. However, there was more attention paid to national and international news on the editorial, op-ed, and front pages in contrast to its previous policy of stressing Toronto and Ontario material. ''The Globe and Mail'' has always been a morning newspaper. Since the 1980s, it has been printed in separate editions in six Canadian cities: Montreal, Toronto (several editions), Winnipeg (Estevan, Saskatchewan), Calgary and Vancouver. Southern Ontario Newspaper Guild (SONG) employees took their first-ever strike vote at ''The Globe'' in 1982, also marking a new era in relations with the company. Those negotiations ended without a strike, and the Globe unit of SONG still has a strike-free record. SONG members voted in 1994 to sever ties with the American-focused Newspaper Guild. Shortly afterwards, SONG affiliated with the Communications, Energy and Paperworkers Union of Canada (CEP).