Cognates with the name ''Tai'' (''Thai, Dai'', etc.) are used by speakers of many Tai languages. The term ''Tai'' is now well-established as the generic name in English. In his book '' The Tai-Kadai Languages'' Anthony Diller claims that Lao scholars he has met are not pleased with Lao being regarded as a Tai language. For some, Thai should instead be considered a member of the Lao language family. One or more Ancient Chinese characters for 'Lao' may be cited in support of this alternative appellation. Some scholars including Benedict (1975), have used ''Thai'' to refer to a wider (''Tai'') grouping and one sees designations like ''proto-Thai'' and ''Austro-Thai'' in earlier works. In the institutional context in Thailand, and occasionally elsewhere, sometimes ''Tai'' (and its corresponding Thai-script spelling, without a final -y symbol) is used to indicate varieties in the language family not spoken in Thailand or spoken there only as the result of recent immigration. In this usage ''Thai'' would not then be considered a ''Tai'' language. On the other hand, Gedney, Li and others have preferred to call the standard language of Thailand ''Siamese'' rather than ''Thai'', perhaps to reduce potential ''Thai/Tai'' confusion, especially among English speakers not comfortable with making a non-English initial unaspirated voiceless initial sound for ''Tai'', which in any event might sound artificial or arcane to outsiders. According to Michel Ferlus, the ethnonyms Tai/Thai (or Tay/Thay) would have evolved from the etymon *k(ə)ri: 'human being' through the following chain: kəri: > kəli: > kədi:/kədaj (-l- > -d- shift in tense sesquisyllables and probable diphthongization of -i: > -aj). This in turn changed to di:/daj (presyllabic truncation and probable diphthongization -i: > -aj). And then to *dajA (Proto-Southwestern Tai) > tʰajA2 (in Siamese and Lao) or > tajA2 (in the other Southwestern and Central Tai languages by Li Fangkuei). Michel Ferlus' work is based on some simple rules of phonetic change observable in the Sinosphere and studied for the most part by William H. Baxter (1992). Many of the languages are called ''Zhuang'' in China and ''Nung'' in Vietnam.

thumb|Tai alphabets. The phrase is ''kind elephant rider''. Citing the fact that both the Zhuang and Thai peoples have the same exonym for the Vietnamese, ''kɛɛuA1'', Jerold A. Edmondson of the University of Texas at Arlington posited that the split between Zhuang (a Central Tai language) and the Southwestern Tai languages happened no earlier than the founding of Jiaozhi in Vietnam in 112 BCE but no later than the 5th-6th century AD. Based on layers of Chinese loanwords in Proto-Southwestern Tai and other historical evidence, Pittayawat Pittayaporn (2014) suggests that the dispersal of Southwestern Tai must have begun sometime between the 8th and 10th centuries AD.

Haudricourt emphasizes the specificity of Dioi (Zhuang) and proposes to make a two-way distinction between the following two sets. The original language names used in Haudricourt's (1956) are provided first; alternative names are given in parentheses. Characteristics of the Dioi group pointed out by Haudricourt are (i) a correspondence between r- in Dioi and the lateral l- in the other Tai languages, (ii) divergent characteristics of the vowel systems of the Dioi group: e.g. 'tail' has a /a/ vowel in Tai proper, as against /ə̄/ in Bo-ai, /iə/ in Tianzhou, and /ɯə/ in Tianzhou and Wuming, and (iii) the lack, in the Dioi group, of aspirated stops and affricates, which are found everywhere in Tai proper. As compared with Li Fang-kuei's classification, Haudricourt's classification amounts to consider Li's Southern Tai and Central Tai as forming a subgroup, of which Southwestern Tai is a sister: the three last languages in Haudricourt's list of 'Tai proper' languages are Tho (Tày), Longzhou, and Nung, which Li classifies as 'Central Tai'.

Li Fang-Kuei divided Tai into Northern, Central, and Southwestern (Thai) branches. However, Central Tai does not appear to be a valid group. Li (1977) proposes a tripartite division of Tai into three sister branches. This classification scheme has long been accepted as the standard one in the field of comparative Tai linguistics.

Gedney (1989) considers Central and Southwestern Tai to form a subgroup, of which Northern Tai is a sister. This classification is in agreement with Haudricourt (1956).

Luo Yongxian (1997:232) classifies the Tai languages as follows, and proposes a fourth branch called ''Northwestern Tai'' that includes Ahom, Shan, Dehong Dai, and Khamti. All branches are considered to be coordinate to each other.

Pittayawat Pittayaporn (2009) classifies the Tai languages based on clusters of shared innovations (which, individually, may be associated with more than one branch) (Pittayaporn 2009:298). In Pittayaporn's preliminary classification system of the Tai languages, Central Tai is considered to be paraphyletic and is split up into multiple branches, with the Zhuang varieties of Chongzuo in southwestern Guangxi (especially in the Zuo River valley at the border to Vietnam) having the most internal diversity. The Southwestern Tai and Northern Tai branches remain intact as in Li Fang-Kuei's 1977 classification system, and several of the Southern Zhuang languages allocated ISO codes are considered to be paraphyletic. The classification is as follows. Standard Zhuang is based on the dialect of Shuangqiao (双桥), Wuming District. 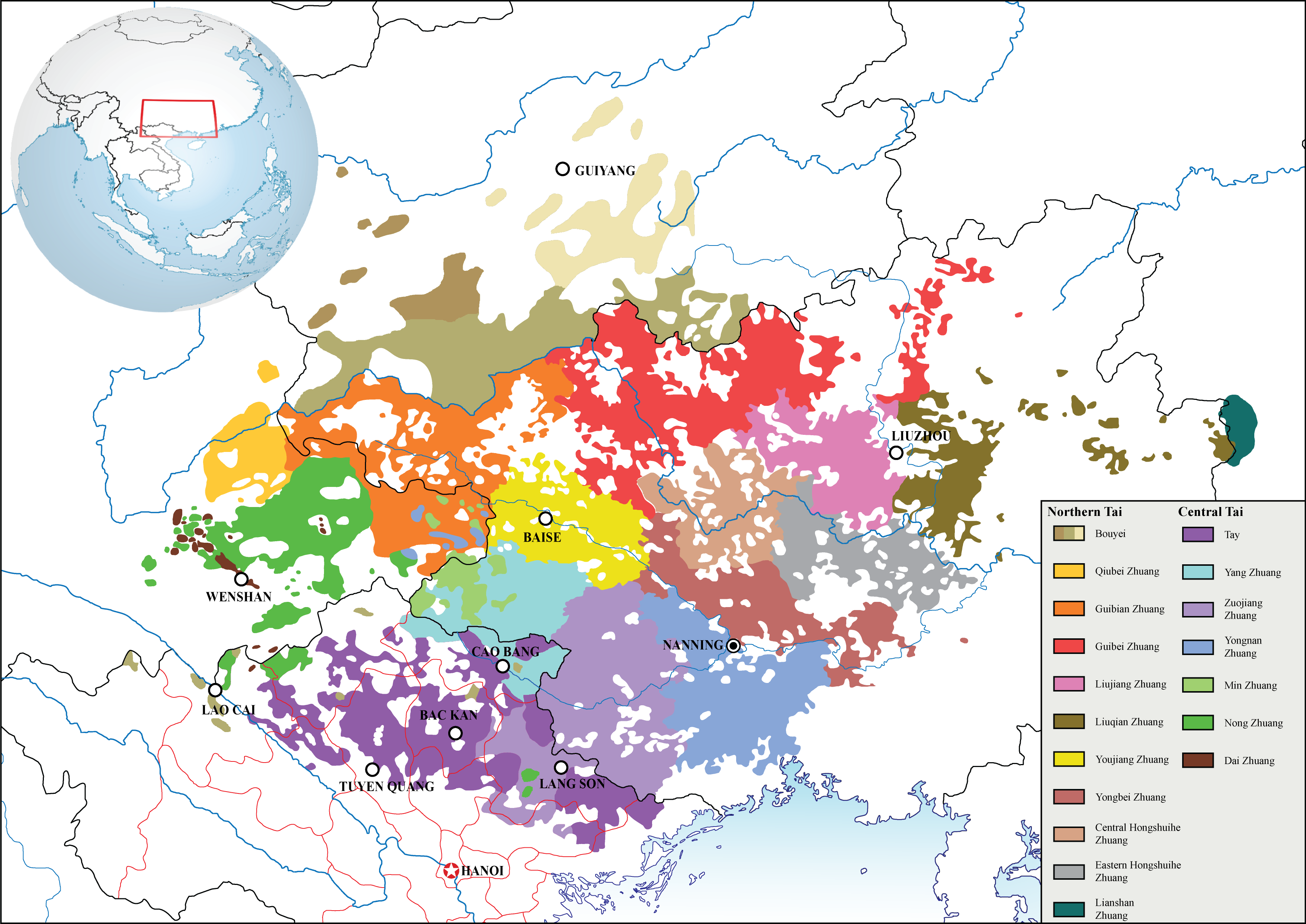 Below is comparative table of Tai languages. 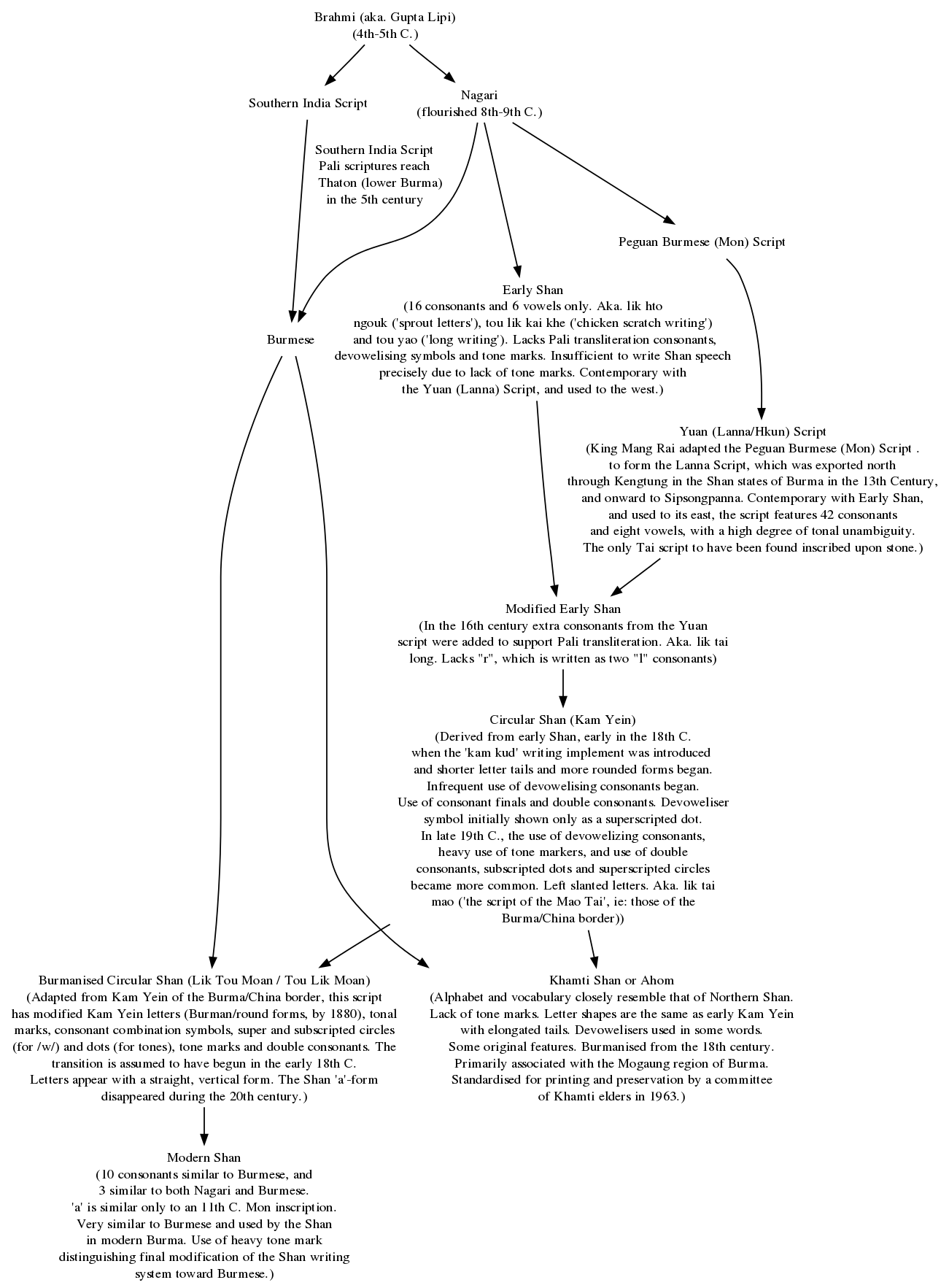 ABVD: Proto-Southwestern Tai word list
* Kelley, Liam
Tai Words and the Place of the Tai in the Vietnamese Past
{{DEFAULTSORT:Tai Languages Category:Languages of Southeast Asia