In the 1970s, the PLAAF initiated a project to development a replacement for its MiG-19s. The Shenyang Aircraft Factory proposal, designated J-11, was a new light fighter powered by the British Rolls-Royce Spey 512 engine, with better maneuverability than the MiG-19 and better climb rate than the MiG-21. The project was abandoned due to difficulties in obtaining the engines.

The actual J-11 comes from 1996, when China bought 200 Su-27s through Rosoboronexport for under a coproduction scheme. By the agreement, SAC would assemble aircraft from kits manufactured by Komsomolsk-on-Amur Aircraft Plant (KnAPPO), and fit them with Russian subsystems (avionics, radars and engines) which would not be coproduced. Production began in 1997. The first two were poorly assembled and required Russian assistance to rebuild. Five were built by 2000, and another 20 by 2003, by which time production was of high quality and incorporated local airframe parts; Russia did not object to local airframe parts, which allowed KnAPPO to reduce the contents of the kits. By late-2004, KnAPPO delivered 105 kits, and 95 J-11s were delivered to the PLAAF. Coproduction of the Su-27s ended in 2004 because China was developing the J-11B - a variant with domestic subsystems - in violation of the coproduction agreement. China's official reason for violating the agreement was that the J-11 no longer satisfied PLAAF requirements. From 2008 through 2011, China engaged in smuggling Su-27 parts from Russia. By 2015, J-11s were upgraded with missile approach warning system (MAWS). Unconfirmed upgrades included improved cockpit displays, and fire control systems for R-77 or PL-10 missiles.

The J-11B is a multirole variant of the J-11 incorporating Chinese subsystems. It was conceived as a way to remove the J-11's dependency on Russia. SAC unveiled a J-11B mockup in mid-2002. Three prototypes were delivered to the PLAAF for testing in 2006. The two-seater J-11BS followed two years after the J-11B. By 2011, reportedly 90% of the J-11B was based on subsystems and parts designed in China, with the engine presumably being a major part of the remainder. Many domestic subsystems are improvements of those found on the Su-27SK. Chinese subsystems on the J-11B include Type 1474 radar, 3-axis data system, power supply system, emergency power unit, brake system, hydraulic system, fuel system, environment control system, molecular sieve oxygen generation systems, digital flight control system, and glass cockpit. The IRST is a Chinese copy of the Russian OEPS-27. The airframe is slightly lighter due to greater use of composites. The J-11B may carry the PL-12 and PL-15 air-to-air missiles

By 2004, the J-11 was being tested with the Shenyang WS-10. Testing may have started as early as 2002; an image from the 2002 China International Aviation & Aerospace Exhibition allegedly depicted a J-11 with one engine replaced with a WS-10. WS-10 development proved difficult. One regiment converted to WS-10-powered J-11Bs in 2007, but was grounded for an extended period due to poor operational reliability. The WS-10A reportedly matured enough after 2009 to power the J-11B Block 02 aircraft, and Jane's reported the J-11B as powered by the WS-10 in 2014.

At the 2009 Farnborough Airshow, Alexander Fomin, Deputy Director of Russia's Federal Service for Military-Technical Co-operation, reported that Russia had not asked China about the "copying" of military equipment, and that China had licences to manufacture the aircraft and its components, including an agreement on the production of intellectual property (IP) rights. The undisclosed IP agreement fuelled speculation about secret contracts or clauses in the original contract. The licence does not officially include carrier-capable aircraft (eg. Sukhoi Su-33) or variants (eg. Shenyang J-15.) At MAKS 2009, Rosoboronexport's General Manager Anatoli Isaykin said Russia and Sukhoi would "investigate the J-11B, as a Chinese copy of the Su-27". In 2010, Rosoboronexport reported it was talking with China about the ongoing unlicensed production of Russian weapons. In light of the ongoing investigations, Rosoboronexport expressed concerns over future sales of advanced Russian systems and components to China.

In March 2011 a joint Sino-Pakistani exercise, Shaheen 1, was conducted at a Pakistan Air Force (PAF) base involving a contingent of Chinese aircraft and personnel from the PLAAF. Information on which aircraft were used by each side in the exercise was not released, but photos of Pakistani pilots inspecting what appeared to be Chinese Shenyang J-11B fighters were released on the internet. The exercise lasted for around 4 weeks and was the first time the PLAAF had deployed to and conducted "operational" aerial maneuvers in Pakistan with the PAF. 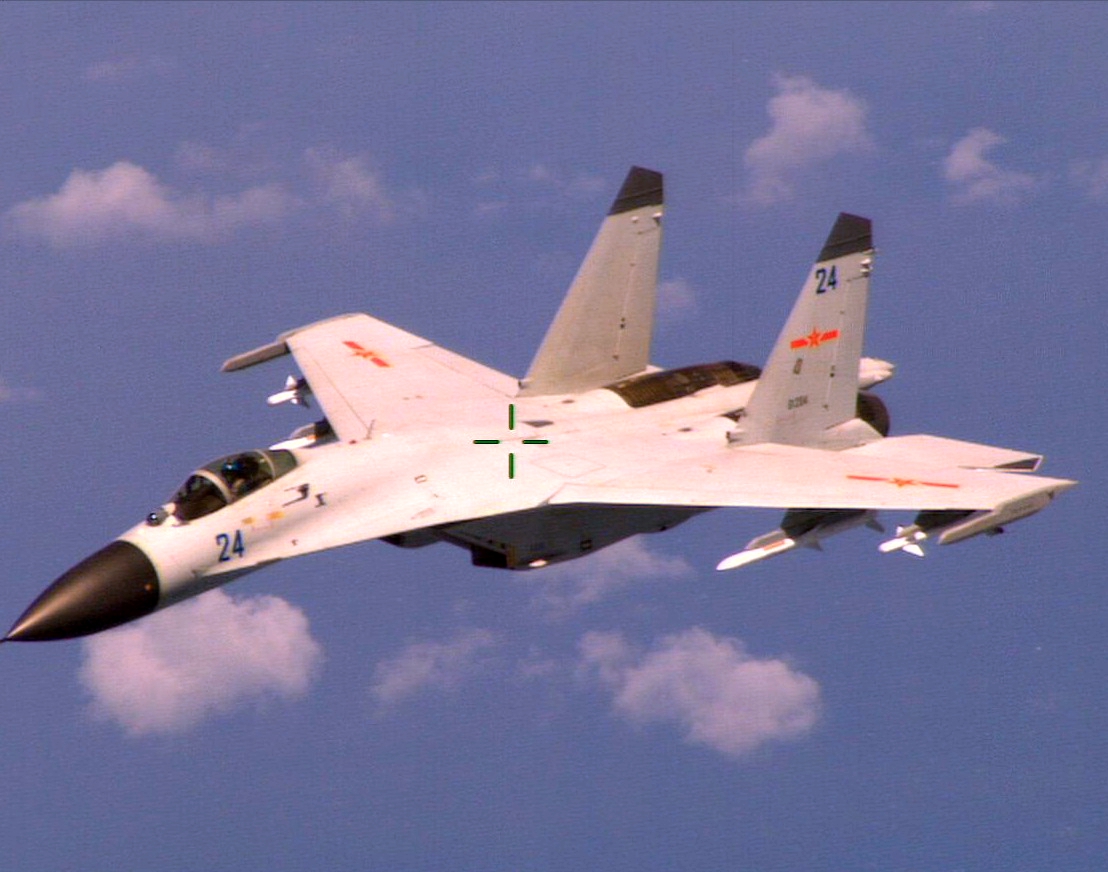 On 19 August 2014 a J-11B intercepted a U.S. Navy P-8 Poseidon anti-submarine warfare aircraft that was over the South China Sea. The U.S. Department of Defense released details at a press conference on 22 August 2014 with Admiral John Kirby as spokesperson. According to Kirby, the incident occurred 135 miles east of Hainan Island, in international airspace. The Chinese jet "crossed under the aircraft with one pass having only 50–100 feet separation. The Chinese jet also passed the nose of the P-8 at 90 degrees with its belly toward the P-8 Poseidon, believed to be displaying its weapons load-out. Afterwards, the J-11 flew directly under and alongside the P-8, bringing their wingtips, as I said, to within 20 feet. And then conducted a roll over the P-8, passing within 45 feet." He said the "unprofessional" and "unsafe" actions of the Chinese pilot was "not keeping with the kind of military-to-military relationship" the U.S. sought to establish with China. An official complaint was sent to China through regular diplomatic channels. The Pentagon commented further that: "Military activities may be conducted within the Exclusive Economic Zone of another nation as an exercise of the freedoms of navigation and overflight."