Scandinavian Airlines, usually known as SAS, is the flag carrier of Denmark, Norway and Sweden. ''SAS'' is an abbreviation of the company's full name, Scandinavian Airlines System or legally Scandinavian Airlines System Denmark-Norway-Sweden. Part of the SAS Group and headquartered at the SAS Frösundavik Office Building in Solna, Sweden, the airline operates 180 aircraft to 90 destinations (as of December 2019). The airline's main hub is at Copenhagen-Kastrup Airport, with connections to 109 destinations around the world. Stockholm Arlanda Airport (with 106 destinations) is the second largest hub and Oslo Airport, Gardermoen being the third major hub of SAS. Minor hubs also exist at Bergen Airport, Flesland, Göteborg Landvetter Airport, Stavanger Airport, Sola, and Trondheim Airport, Værnes. SAS Cargo is an independent, wholly owned subsidiary of Scandinavian Airlines and its main office is at Copenhagen Airport. In 2017, SAS carried 28.6 million passengers, achieving revenues of 40 billion Swedish kronor. This makes it the eighth-largest airline in Europe and the largest in Denmark and Sweden. The SAS fleet is composed of 180 aircraft consisting of Airbus A319, Airbus A320, Airbus A320neo, Airbus A321, Airbus A330, Airbus A340, Airbus A350, and Boeing 737 Next Generation aircraft. SAS also wet leases Airbus A320neo, ATR 72, and Bombardier CRJ900 aircraft. The airline was founded in 1946 as a consortium to pool the transatlantic operations of Swedish airline Svensk Interkontinental Lufttrafik, Norway's Det Norske Luftfartselskap and Det Danske Luftfartselskab of Denmark. The consortium was extended to cover European and domestic cooperation two years later. In 1951, all the airlines were merged to create SAS. SAS has been described as "an icon of Norwegian–Swedish–Danish cooperation". On 27 June 2018, the Norwegian government announced that it had sold all its shares in SAS. In 1997, SAS was a founding member of one of the major airline alliances, Star Alliance.

The airline was founded on 1 August 1946, when Svensk Interkontinental Lufttrafik AB (an airline owned by the Swedish Wallenberg family), Det Danske Luftfartselskab A/S, and Det Norske Luftfartselskap AS (the flag carriers of Denmark and Norway) formed a partnership to handle the intercontinental air traffic of these three Scandinavian countries. The first president of SAS was Per A. Norlin. On 17 September 1946, operations started under the new entity, the first international service was conducted between Stockholm and New York. Within a half-year, SAS set a new record for carrying the heaviest single piece of air cargo across the Atlantic on a scheduled passenger airliner, by shipping a 1,400-pound electrical panel from New York to the Sandvik company in Sweden. In 1948, the Swedish flag carrier AB Aerotransport joined SAS, quickly coordinated its European operations with the latter. Three years later, the companies formally merged to form the SAS Consortium. When established, ownership of the airline was divided between SAS Danmark (28.6%), SAS Norge (28.6%), and SAS Sverige (42.8%), all of which were owned 50% by private investors and 50% by their governments.

During 1954, SAS became the first airline to commence scheduled flights on a polar route, flying Douglas DC-6Bs from Copenhagen to Los Angeles with stops in Søndre Strømfjord (now Kangerlussuaq) in Greenland and Winnipeg in Canada. By summer 1956, traffic on the route had justified the frequency to be increased to three flights per week. The service proved relatively popular with Hollywood celebrities and members of the film industry, and the route turned out to be a publicity coup for SAS. Thanks to a tariff structure that allowed free transit to other European destinations via Copenhagen, this trans-polar route gained increasing popularity with American tourists throughout the 1950s. During 1957, SAS was the first airline to offer around-the-world service over the North Pole via a second polar route served by Douglas DC-7Cs flying from Copenhagen to Tokyo via Anchorage International Airport in Alaska. The flight via Alaska was a compromise solution since the Soviet Union would not allow SAS, among other air carriers, to fly across Siberia between Europe and Japan, and Chinese airspace was also closed.

In 1959, SAS entered the jet age, having procured a number of French-built Sud Aviation Caravelles as the company's first jetliner. During the following year, another jetliner, the Douglas DC-8, was also inducted into the fleet. In addition to modern airliners, SAS also adopted innovative operating practices and systems to improve the customer experience. In 1965, it was the first airline to introduce an electronic reservation system. During 1971, SAS introduced its first Boeing 747 jumbo jet into service. In 1982, SAS was recognised as the most punctual airline operating in Europe at that time. During its first decades, the airline built two large hotels in central Copenhagen, ''SAS Royal Hotel'' (5 stars) and the even larger ''SAS Hotel Scandinavia'' (4 stars, with a casino on the 26th floor). In 1980, SAS opened its first hotel outside of Scandinavia, the ''SAS Kuwait Hotel''. By 1989, SAS's hotels division owned a 40 percent share in the Intercontinental Hotels Group. Following the deregulation of commercial aviation in Europe and the competitive pressures from new rivals, SAS experienced economic difficulties (as did many incumbent flag carrier airlines) this heavily contributed to the airline's decision to sell its hotel chain to the Radisson Hotel Group during 1992. 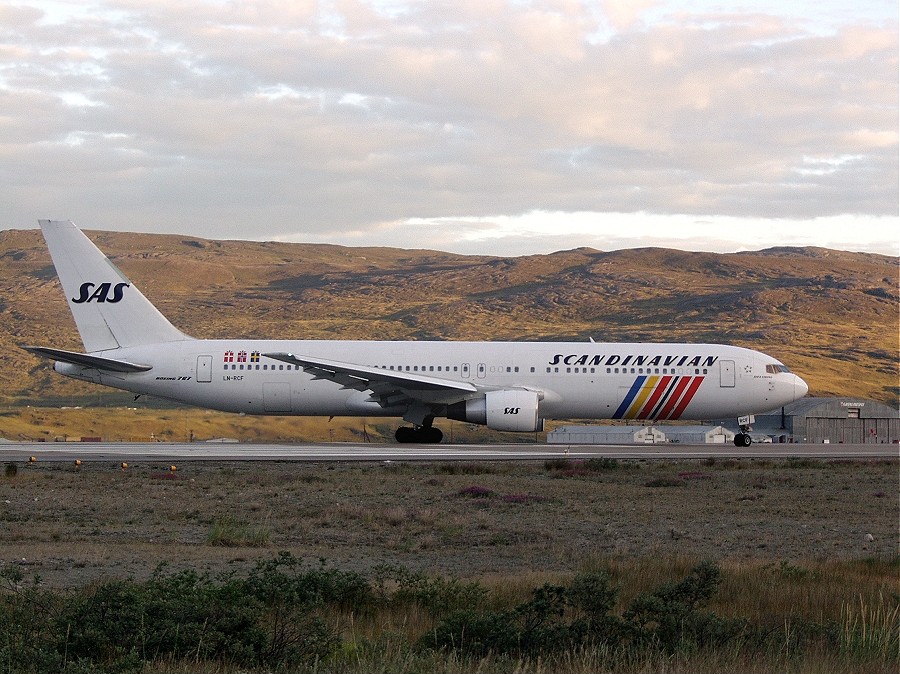 During 1981, Jan Carlzon was appointed as the CEO of SAS; during his tenure, the company underwent a successful financial turnaround of the company starting in 1981 and who envisioned SAS ownership of multiple airlines worldwide. SAS gradually acquired control of the domestic markets in all three countries; this was achieved by acquiring full or partial control of various competing local airlines, including Braathens and Widerøe in Norway; Linjeflyg and Skyways Express in Sweden; and Cimber Air in Denmark. During 1989, SAS acquired 18.4% of the Texas Air Corporation, the parent company of Continental Airlines, in a bid to form a global alliance. However, this did not come about and the stake in the Texas Air Corporation was subsequently sold on. During the 1990s, SAS also acquired a 20 percent stake in British Midland, as well as purchasing 95 percent of Spanair, the second-largest airline in Spain, in addition to Air Greenland. During the early 1990s, SAS unsuccessfully tried to merge itself with the Dutch airline KLM, along with Austrian Airlines and Swissair, in a proposed combined entity commonly called Alcazar. However, months of negotiations towards this ambitious merger ultimately collapsed due to multiple unsettled issues; this strategic failure heavily contributed to the departure of Carlzon that same year and his replacement by Jan Reinås. The airline marked its 50th year of operation on 1 August 1996 with the harmonization and name of SAS's parent company to ''SAS Danmark A/S, SAS Norge ASA'' and ''SAS Sverige AB''. During May 1997, SAS became a founding member of the global Star Alliance network, joining with airlines such as Air Canada, Lufthansa, Thai Airways International, and United Airlines. During June 2001, the ownership structure of SAS was changed, with a holding company being created in which the holdings of the governments changed to Sweden (21.4%), Norway (14.3%), and Denmark (14.3%), while the remaining 50 per cent of shares were publicly held and traded on the stock market. During 2004, SAS was again restructured, being divided into four separate companies: ''SAS Scandinavian Airlines Sverige AB, SAS Scandinavian Airlines Danmark A/S, SAS Braathens AS,'' and ''SAS Scandinavian International AS''. ''SAS Braathens'' was re-branded ''SAS Scandinavian Airlines Norge AS'' in 2007. However, during October 2009, the four companies were once again united into one company, named ''SAS Scandinavian System AB''.

With the growth of budget airlines and decreasing fares in Scandinavia, the business experienced financial hardship. By 2009, competitive pressures had compelled the airline to launch a cost-cutting initiative. In the first step of which, the business sold its stakes in other companies, such as British Midland International, Spanair, and airBaltic, and began to restructure its operations. During January 2009, an agreement to divest more than 80 percent of the holdings in Spanair was signed with a Catalan group of investors led by Consorci de Turisme de Barcelona and Catalana d'Inciatives. These changes reportedly reduced the airliner's expenses by around 23 per cent between 2008 and 2011. During November 2012, the company came under heavy pressure from its owners and banks to implement even heavier cost-cutting measures as a condition for continued financial support. Negotiations with the respective trade unions took place for more than a week, exceeded the original deadline; in the end, an agreement was reached between SAS and the trade unions that would increase the work time, cutting employee's salaries by between 12 and 20 per cent, along with reductions to the pension and retirement plans; these measures were aimed at keeping the airline as an operating concern. SAS drew criticism for how it had handled the negotiations, having reportedly denied facilities to the union delegations. During 2017, SAS announced that it was forming a new airline, Scandinavian Airlines Ireland, operating out of Heathrow Airport and Málaga Airport to fly European routes on its parent's behalf using nine new A320Neo airliners. SAS' sought to replace its own aircraft with cheaper ones crewed and based outside Scandinavia to compete better with other airlines. The Swedish Pilots Union expressed its dissatisfaction with the operational structure of the new airline, suggesting it violated the current labour-agreements. The Swedish Cabin Crew Union also condemned the new venture and stated that SAS established the airline to "not pay decent salaries" to cabin crew. During 2018, SAS announced that it had placed an order for 50 Airbus A320neo narrow-body jetliners; these shall facilitate the creation of a single-type fleet. That same year, the Norwegian government divested its stake in the airline. As part of an environmental initiative launched by SFO, in December 2018 SAS flights operating out of SFO have been supplied with sustainable aviation fuel from Shell and SkyNRG.

The key trends for Scandinavian Airlines Group (which includes SAS Cargo, SAS Ground Handling, and SAS Tech), are shown below (since 2012, for years ending 31 October):