The city was initially a small village inhabited by Assyrians called (''Bēṯ Zālīn'') meaning "House of Reeds". The current name is a Turkified form of this, as "kamış" means "reed" and "-lı" suffix means "place of" in Turkish.

With a population of 184,231 (2004 Census), Qamishli is among the 10 largest cities in Syria by population. Qamishli is an ethnically mixed city. Kurds make up a majority of the city's population, which also has many Arabs, Assyrians, and Armenians. The city is considered to be a Christian center in Syria, and was a Christian-majority city for much of its history. In the 1930s it is estimated that out of the town's population of 23,000 individuals, 20,000 of those were Christians. Before the Syrian Civil War, the Christian population of Qamishli was about 40,000, of whom 25,000 belonged to the Syriac Orthodox Church, the biggest church in the city. As of 2014 it was believed that half of all Christians had left the city. Historically, Qamishli was also home to a significant Jewish community. The origin of the Jews of Qamishli (unlike the Jews of Damascus and Aleppo who are a mixture of Sephardi Jews and Musta'arabi Jews) is the adjoining city of Nusaybin, on the other side of the Turkish-Syrian border. As after the foundation of Turkey in 1923, the major economic hubs were allocated to Turkey, the French Mandate authorities deemed it necessary to encourage the settlement or foundation of new villages and towns in the region. The current town was founded in 1926 by the French Mandate, which following encouraged the settlement of the population in Nusaybin, which is located just across the border. Within a few years, Qamishli was more populous than Nusaybin. The major part of the Christian, and also of the Jewish population from Nusaybin moved to Qamsihli. In the 1930s the Jewish population of Qamishli numbered 3,000. After the escalation of the Israeli–Palestinian conflict in 1947, the situation of the Jews of Qamishli deteriorated. The exodus of Jews from Syria peaked due to violence, such as the 1947 anti-Jewish riots in Aleppo. By 1963, the community had dwindled to 800, and after the Six-Day War it went down further to 150, of whom only few remain today. In 1939, French mandate authorities reported the following population numbers for different ethnic/religious groups in Qamishli city centre.

Once a Christian-majority city, the rural migration to Qamishli has increased the Kurdish population of the city. In addition, since the PYD militia took control of the city in 2012 they carried out a Kurdification process touching all aspects of life, starting by changing the name of the city to Qamishlo, to forcing a Kurdish-language curriculum on non-Kurdish citizens, to cultural and social aspects of the city. The Christian and Arab population in the city were fiercely opposed to the PYD rule. Half the Christian population left by 2017 although no fighting happened in the city.

The city dates back to the 1920s, when a sizable amount of Assyrians, escaping the Assyrian genocide carried out by the Ottoman Empire, fled from northwestern Iran and southern Turkey and built a small town which they initially called Bet-Zalin. The city itself was officially founded as Qamishli in 1926 as a railway station on the Taurus railway. One of the most important funders of the early development projects in the city was Masoud Asfar, an Assyrian who survived the Massacres of Diyarbakır (1895) as a young child. Masoud, along with stepbrother, whose last name was Najjar, established the Asfar & Najjar Corporation, a company that produced wheat in Qamishli. Throughout the 1920s–1940s, the Asfar & Najjar Corporation funded hospitals, Assyrian schools, and churches throughout the city. At the same time, many Armenians and Syriac Christians, fleeing persecution in Iraq and Turkey, moved into the region. However, in the 1960s and until the late 1970s, when Assyrians still constituted two-thirds of the city's population, the government of the Arab Socialist Ba'ath Party – Syria Region actively confiscated Assyrian farms, lands, and areas, causing an Assyrian exodus. Qamishli, the second largest city in al-Hasakah Governorate, is considered a center for both the Kurdish and the Assyrian ethnic groups in Syria. It was heavily settled by refugees from the Assyrian genocide. Assyrians were the majority in the city until the 1970s, when Kurds from the surrounding countryside moved into the city in numbers. Qamishli is renowned for its large Christmas parade, and Newroz and Kha b-Nisan festivals.

In March 2004, during a chaotic soccer match, the Qamishli riots began when visiting Arab fans from Deir ez-Zor started praising Saddam Hussein to taunt the Kurdish home fans. The riot expanded out of the stadium and weapons were used against people of Kurdish background. In the aftermath, at least 30 Kurds were killed as the Syrian security services took over the city. The event became known the "Qamishli massacre". 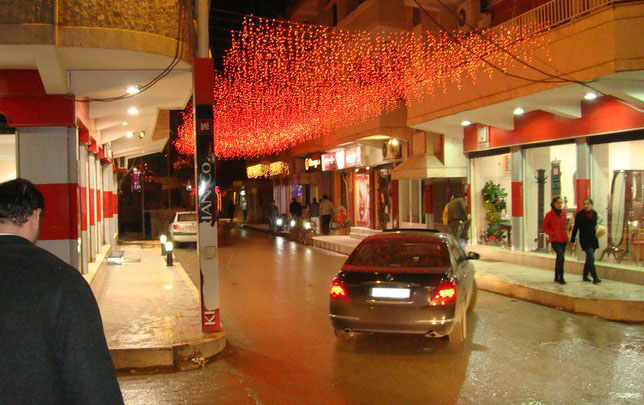 In June 2005, thousands of Kurds demonstrated in Qamishli to protest the assassination of Sheikh Khaznawi, a Kurdish cleric in Syria, resulting in the death of one policeman and injury to four Kurdish civilians. In March 2008, according to Human Rights Watch, three more Kurds were killed when Syrian security forces opened fire on people celebrating the spring festival of Newroz.

With the Syrian Civil War and the Rojava conflict from 2011, the city grew into a major political role, being the de facto capital of the Autonomous Administration of North and East Syria (AANES). Part of the city, as well as an area to the south which includes Qamishli Airport, remain under the administration of the Syrian government. Unlike many Syrian cities, Qamishli has not seen large-scale fighting during the war, although it has been affected by Islamic State of Iraq and the Levant attacks in 2015 and 2016, as well as brief skirmishes between AANES and regime forces in 2016 and 2018. Qamishli is home to Chirkin prison, which houses detained Islamic State militants. On 17 August 2020, Syrian forces reportedly clashed with US troops near Qamishli, which resulted in the death of one Syrian. Two other Syrian soldiers were said to have been injured during the clash, state media added. On January 2021, Qamishli along with Al-Hasakah came under siege by the Asayish due to disputes with Damascus government.

The Syrian government remains in control of a large part of the centre of the city as well as a substantial rural area to the south, including the airport, the border crossing, various government buildings, and many residential neighborhoods. The Damascus government still organises the production and the distribution of the harvest in the southern countryside, and organizes flights between Qamishli and other Syrian cities, as well as Beirut. Most of the city is under the administration of the AANES.

The Köppen climate classification subtype for this climate is "Csa" (Mediterranean climate; dry-summer subtropical climate). The summers tend to be dry and warm, with July being the hottest month of the year, while the winters are usually cold and wet, with January being the coldest month and having an average of 11 days of rain. In total, around 53 days of rain occur every year.

The Kurdish-language newspaper ''Nu Dem'' has its headquarters in Qamishli.