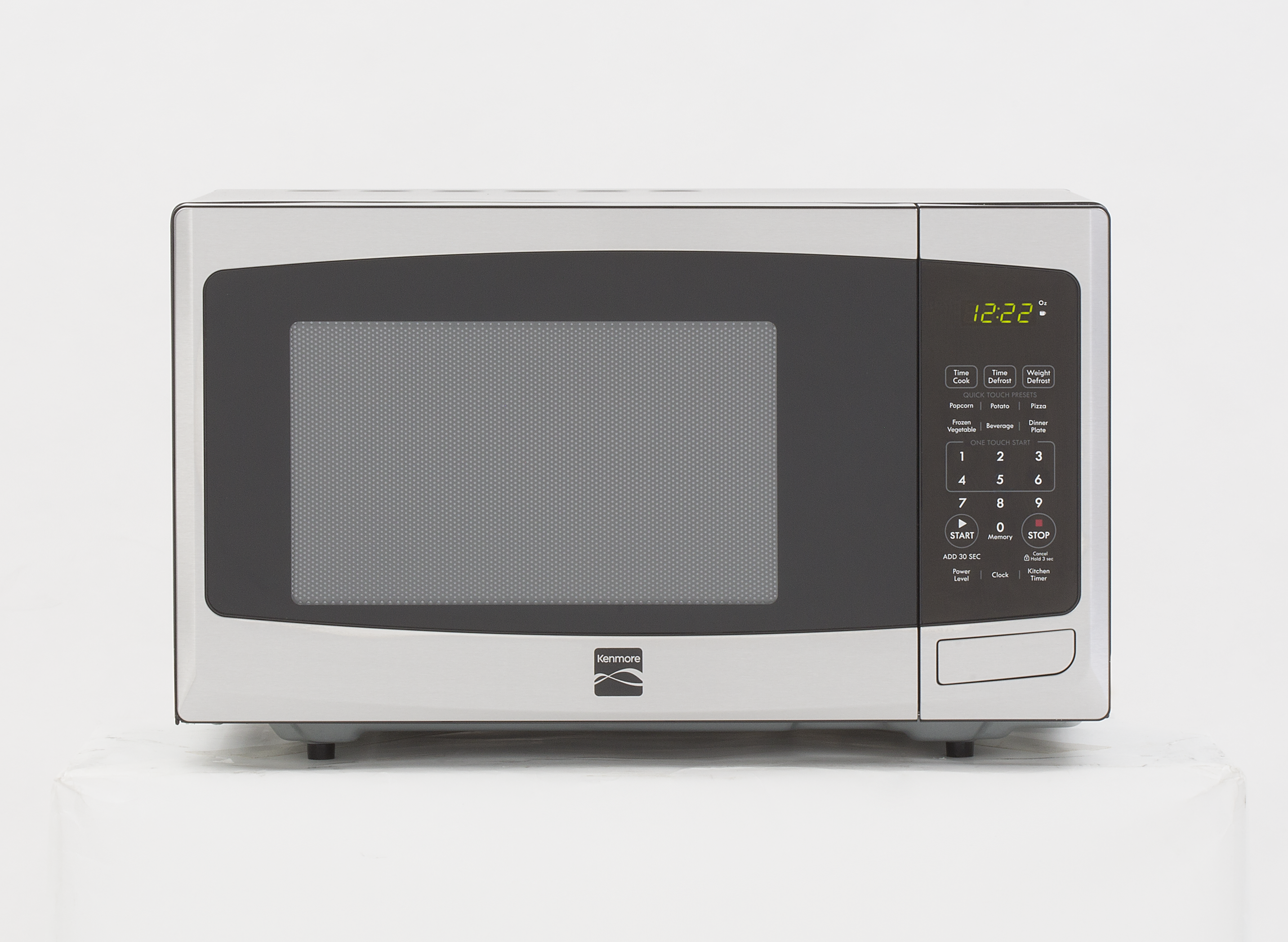 A microwave oven (commonly referred to as a microwave) is an electric oven that heats and cooks food by exposing it to electromagnetic radiation in the microwave frequency range. This induces polar molecules in the food to rotate and produce thermal energy in a process known as dielectric heating. Microwave ovens heat foods quickly and efficiently because excitation is fairly uniform in the outer of a homogeneous, high water content food item. The development of the cavity magnetron in the UK made possible the production of electromagnetic waves of a small enough wavelength (microwaves). American engineer Percy Spencer is generally credited with inventing the modern microwave oven after World War II from radar technology developed during the war. Named the "Radarange", it was first sold in 1946. Raytheon later licensed its patents for a home-use microwave oven that was introduced by Tappan in 1955, but it was still too large and expensive for general home use. Sharp Corporation introduced the first microwave oven with a turntable between 1964 and 1966. The countertop microwave oven was introduced in 1967 by the Amana Corporation. After microwave ovens became affordable for residential use in the late 1970s, their use spread into commercial and residential kitchens around the world. In addition to cooking food, microwave ovens are used for heating in many industrial processes. Microwave ovens are a common kitchen appliance and are popular for reheating previously cooked foods and cooking a variety of foods. They rapidly heat foods which can easily burn or turn lumpy if cooked in conventional pans, such as hot butter, fats, chocolate or porridge. Microwave ovens usually do not directly brown or caramelize food, since they rarely attain the necessary temperature to produce Maillard reactions. Exceptions occur in cases where the oven is used to heat frying-oil and other oily items (such as bacon), which attain far higher temperatures than that of boiling water. Microwave ovens have a limited role in professional cooking, because the boiling-range temperatures of a microwave oven will not produce the flavorful chemical reactions that frying, browning, or baking at a higher temperature will. However, such high heat sources can be added to microwave ovens in the form of a convection microwave oven.

The exploitation of high-frequency radio waves for heating substances was made possible by the development of vacuum tube radio transmitters around 1920. By 1930 the application of short waves to heat human tissue had developed into the medical therapy of diathermy. At the 1933 Chicago World's Fair, Westinghouse demonstrated the cooking of foods between two metal plates attached to a 10 kW, 60 MHz shortwave transmitter. The Westinghouse team, led by I. F. Mouromtseff, found that foods like steaks and potatoes could be cooked in minutes. The 1937 United States patent application by Bell Laboratories states: However, lower-frequency dielectric heating, as described in the aforementioned patent, is (like induction heating) an electromagnetic heating effect, the result of the so-called near-field effects that exist in an electromagnetic cavity that is small compared with the wavelength of the electromagnetic field. This patent proposed radio frequency heating, at 10 to 20 megahertz (wavelength 30 to 15 meters, respectively). Heating from microwaves that have a wavelength that is small relative to the cavity (as in a modern microwave oven) is due to "far-field" effects that are due to classical electromagnetic radiation that describes freely propagating light and microwaves suitably far from their source. Nevertheless, the primary heating effect of all types of electromagnetic fields at both radio and microwave frequencies occurs via the dielectric heating effect, as polarized molecules are affected by a rapidly alternating electric field.

The invention of the cavity magnetron made possible the production of electromagnetic waves of a small enough wavelength (microwaves). The magnetron was a crucial component in the development of short wavelength radar during World War II. In 1937–1940, a multi-cavity magnetron was built by British physicist Sir John Turton Randall, FRSE and coworkers, for the British and American military radar installations in World War II. A higher-powered microwave generator that worked at shorter wavelengths was needed, and in 1940, at the University of Birmingham in England, Randall and Harry Boot produced a working prototype. They invented a valve that could produce pulses of microwave radio energy at a wavelength of 10 cm, an unprecedented discovery. Sir Henry Tizard travelled to the U.S. in late September 1940 to offer the magnetron in exchange for their financial and industrial help (see Tizard Mission). An early 6 kW version, built in England by the General Electric Company Research Laboratories, Wembley, London, was given to the U.S. government in September 1940. The magnetron was later described by American historian James Phinney Baxter III as "e most valuable cargo ever brought to our shores". Contracts were awarded to Raytheon and other companies for the mass production of the magnetron.

In 1945, the heating effect of a high-power microwave beam was accidentally discovered by Percy Spencer, an American self-taught engineer from Howland, Maine. Employed by Raytheon at the time, he noticed that microwaves from an active radar set he was working on started to melt a chocolate bar he had in his pocket. The first food deliberately cooked with Spencer's microwave oven was popcorn, and the second was an egg, which exploded in the face of one of the experimenters. To verify his finding, Spencer created a high density electromagnetic field by feeding microwave power from a magnetron into a metal box from which it had no way to escape. When food was placed in the box with the microwave energy, the temperature of the food rose rapidly. On 8 October 1945, Raytheon filed a United States patent application for Spencer's microwave cooking process, and an oven that heated food using microwave energy from a magnetron was soon placed in a Boston restaurant for testing.

In 1947, Raytheon built the "Radarange", the first commercially available microwave oven. It was almost tall, weighed and cost about US$5,000 ($ in dollars) each. It consumed 3 kilowatts, about three times as much as today's microwave ovens, and was water-cooled. The name was the winning entry in an employee contest. An early Radarange was installed (and remains) in the galley of the nuclear-powered passenger/cargo ship NS ''Savannah''. An early commercial model introduced in 1954 consumed 1.6 kilowatts and sold for US$2,000 to US$3,000 ($ to $ in dollars). Raytheon licensed its technology to the Tappan Stove company of Mansfield, Ohio in 1952. Under contract to Whirlpool, Westinghouse, and other major appliance manufacturers looking to add matching microwave ovens to their conventional oven line, Tappan produced several variations of their built-in model from roughly 1955 to 1960. Due to maintenance (some units were water cooled), in-built requirement, and cost (US$1,295 ($ in dollars)), sales were limited. Japan's Sharp Corporation began manufacturing microwave ovens in 1961. Between 1964 and 1966, Sharp introduced the first microwave oven with a turntable, an alternative means to promote more even heating of food. In 1965, Raytheon, looking to expand their Radarange technology into the home market, acquired Amana to provide more manufacturing capability. In 1967, they introduced the first popular home model, the countertop Radarange, at a price of US$495 ($ in dollars). Unlike the Sharp models, a motor driven mode stirrer in the top of the oven cavity rotated allowing the food to remain stationary. In the 1960s, Litton bought Studebaker's Franklin Manufacturing assets, which had been manufacturing magnetrons and building and selling microwave ovens similar to the Radarange. Litton developed a new configuration of the microwave oven: the short, wide shape that is now common. The magnetron feed was also unique. This resulted in an oven that could survive a no-load condition: an empty microwave oven where there is nothing to absorb the microwaves. The new oven was shown at a trade show in Chicago, and helped begin a rapid growth of the market for home microwave ovens. Sales volume of 40,000 units for the U.S. industry in 1970 grew to one million by 1975. Market penetration was even faster in Japan, due to a less expensive re-engineered magnetron. Several other companies joined in the market, and for a time most systems were built by defence contractors, who were most familiar with the magnetron. Litton was particularly well known in the restaurant business.

While uncommon today, combination microwave-ranges were offered by major appliance manufacturers through much of the 1970's as a natural progression of the technology. Both Tappan and General Electric offered units that appeared to be conventional stove top/oven ranges, but included microwave capability in the conventional oven cavity. Such ranges were attractive to consumers since both microwave energy and conventional heating elements could be used simultaneously to speed cooking, and there was no loss of countertop space. The proposition was also attractive to manufacturers as the additional component cost could better be absorbed compared to countertop units where pricing was increasingly market-sensitive. By 1972, Litton (Litton Atherton Division, Minneapolis) introduced two new microwave ovens, priced at $349 and $399, to tap into the market estimated at $750 million by 1976, according to Robert I Bruder, president of the division. While prices remained high, new features continued to be added to home models. Amana introduced automatic defrost in 1974 on their RR-4D model, and was the first to offer a microprocessor controlled digital control panel in 1975 with their RR-6 model.