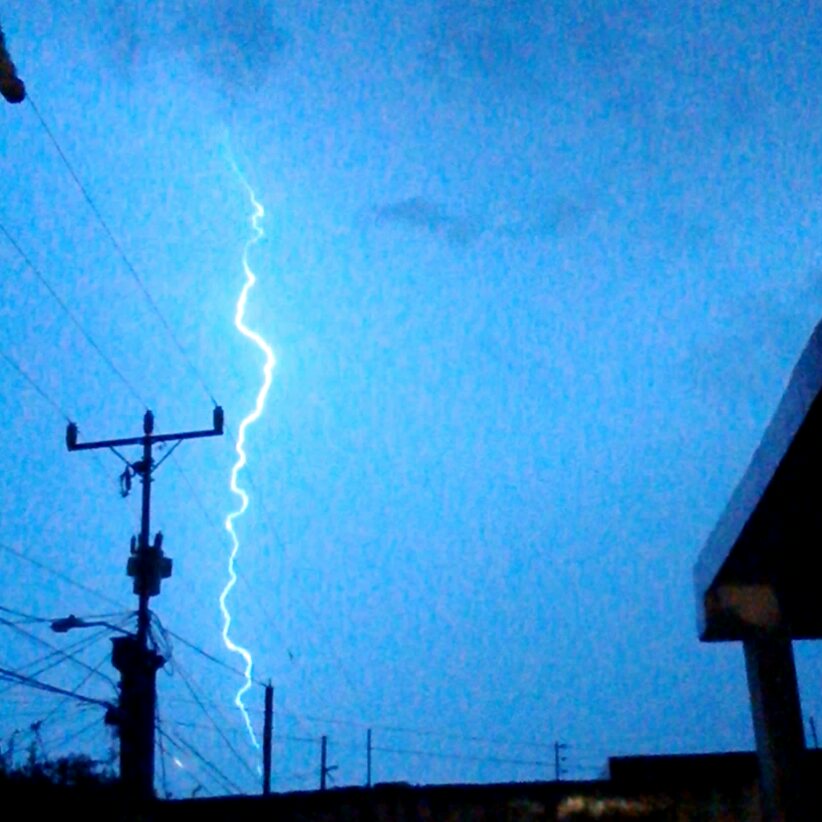 Lightning is a naturally occurring electrostatic discharge during which two electrically charged regions in the atmosphere or ground temporarily equalize themselves, causing the instantaneous release of as much as one gigajoule of energy. This discharge may produce a wide range of electromagnetic radiation, from very hot plasma created by the rapid movement of electrons to brilliant flashes of visible light in the form of black-body radiation. Lightning causes thunder, a sound from the shock wave which develops as gases in the vicinity of the discharge experience a sudden increase in pressure. Lightning occurs commonly during thunderstorms and other types of energetic weather systems, but volcanic lightning can also occur during volcanic eruptions. The three main kinds of lightning are distinguished by where they occur: either inside a single thundercloud, between two different clouds, or between a cloud and the ground. Many other observational variants are recognized, including "heat lightning", which can be seen from a great distance but not heard; dry lightning, which can cause forest fires; and ball lightning, which is rarely observed scientifically. Humans have deified lightning for millennia. Idiomatic expressions derived from lightning, such as the English expression "bolt from the blue", are common across languages.

The details of the charging process are still being studied by scientists, but there is general agreement on some of the basic concepts of thunderstorm electrification. The main charging area in a thunderstorm occurs in the central part of the storm where air is moving upward rapidly (updraft) and temperatures range from ; see Figure 1. In that area, the combination of temperature and rapid upward air movement produces a mixture of super-cooled cloud droplets (small water droplets below freezing), small ice crystals, and graupel (soft hail). The updraft carries the super-cooled cloud droplets and very small ice crystals upward. At the same time, the graupel, which is considerably larger and denser, tends to fall or be suspended in the rising air.

The typical cloud-to-ground lightning flash culminates in the formation of an electrically conducting plasma channel through the air in excess of tall, from within the cloud to the ground's surface. The actual discharge is the final stage of a very complex process. At its peak, a typical thunderstorm produces three or more ''strikes'' to the Earth per minute. Lightning primarily occurs when warm air is mixed with colder air masses, resulting in atmospheric disturbances necessary for polarizing the atmosphere. However, it can also occur during dust storms, forest fires, tornadoes, volcanic eruptions, and even in the cold of winter, where the lightning is known as thundersnow. Hurricanes typically generate some lightning, mainly in the rainbands as much as from the center. The science of lightning is called ''fulminology'', and the fear of lightning is called ''astraphobia''.

Lightning is not distributed evenly around Earth, as shown in the map. On Earth, the lightning frequency is approximately 44 (± 5) times per second, or nearly 1.4 billion flashes per year and the average duration is 0.2 seconds made up from a number of much shorter flashes (strokes) of around 60 to 70 microseconds. Many factors affect the frequency, distribution, strength and physical properties of a typical lightning flash in a particular region of the world. These factors include ground elevation, latitude, prevailing wind currents, relative humidity, and proximity to warm and cold bodies of water. To a certain degree, the proportions of intra-cloud, cloud-to-cloud, and cloud-to-ground lightning may also vary by season in middle latitudes. Because human beings are terrestrial and most of their possessions are on the Earth where lightning can damage or destroy them, CG lightning is the most studied and best understood of the three types, even though IC and CC are more common types of lightning. Lightning's relative unpredictability limits a complete explanation of how or why it occurs, even after hundreds of years of scientific investigation. About 70% of lightning occurs over land in the tropics where atmospheric convection is the greatest. This occurs from both the mixture of warmer and colder air masses, as well as differences in moisture concentrations, and it generally happens at the boundaries between them. The flow of warm ocean currents past drier land masses, such as the Gulf Stream, partially explains the elevated frequency of lightning in the Southeast United States. Because large bodies of water lack the topographic variation that would result in atmospheric mixing, lightning is notably less frequent over the world's oceans than over land. The North and South Poles are limited in their coverage of thunderstorms and therefore result in areas with the least amount of lightning. In general, cloud-to-ground (CG) lightning flashes account for only 25% of all total lightning flashes worldwide. Since the base of a thunderstorm is usually negatively charged, this is where most CG lightning originates. This region is typically at the elevation where freezing occurs within the cloud. Freezing, combined with collisions between ice and water, appears to be a critical part of the initial charge development and separation process. During wind-driven collisions, ice crystals tend to develop a positive charge, while a heavier, slushy mixture of ice and water (called graupel) develops a negative charge. Updrafts within a storm cloud separate the lighter ice crystals from the heavier graupel, causing the top region of the cloud to accumulate a positive space charge while the lower level accumulates a negative space charge.

Because the concentrated charge within the cloud must exceed the insulating properties of air, and this increases proportionally to the distance between the cloud and the ground, the proportion of CG strikes (versus cloud-to-cloud (CC) or in-cloud (IC) discharges) becomes greater when the cloud is closer to the ground. In the tropics, where the freezing level is generally higher in the atmosphere, only 10% of lightning flashes are CG. At the latitude of Norway (around 60° North latitude), where the freezing elevation is lower, 50% of lightning is CG. Lightning is usually produced by cumulonimbus clouds, which have bases that are typically above the ground and tops up to in height. The place on Earth where lightning occurs most often is near the small village of Kifuka in the mountains of the eastern Democratic Republic of the Congo, where the elevation is around . On average, this region receives . Lake Maracaibo in Venezuela averages 297 days per year with lightning activity, an effect recognized as Catatumbo lightning. Other lightning hotspots include Singapore and Lightning Alley in Central Florida.