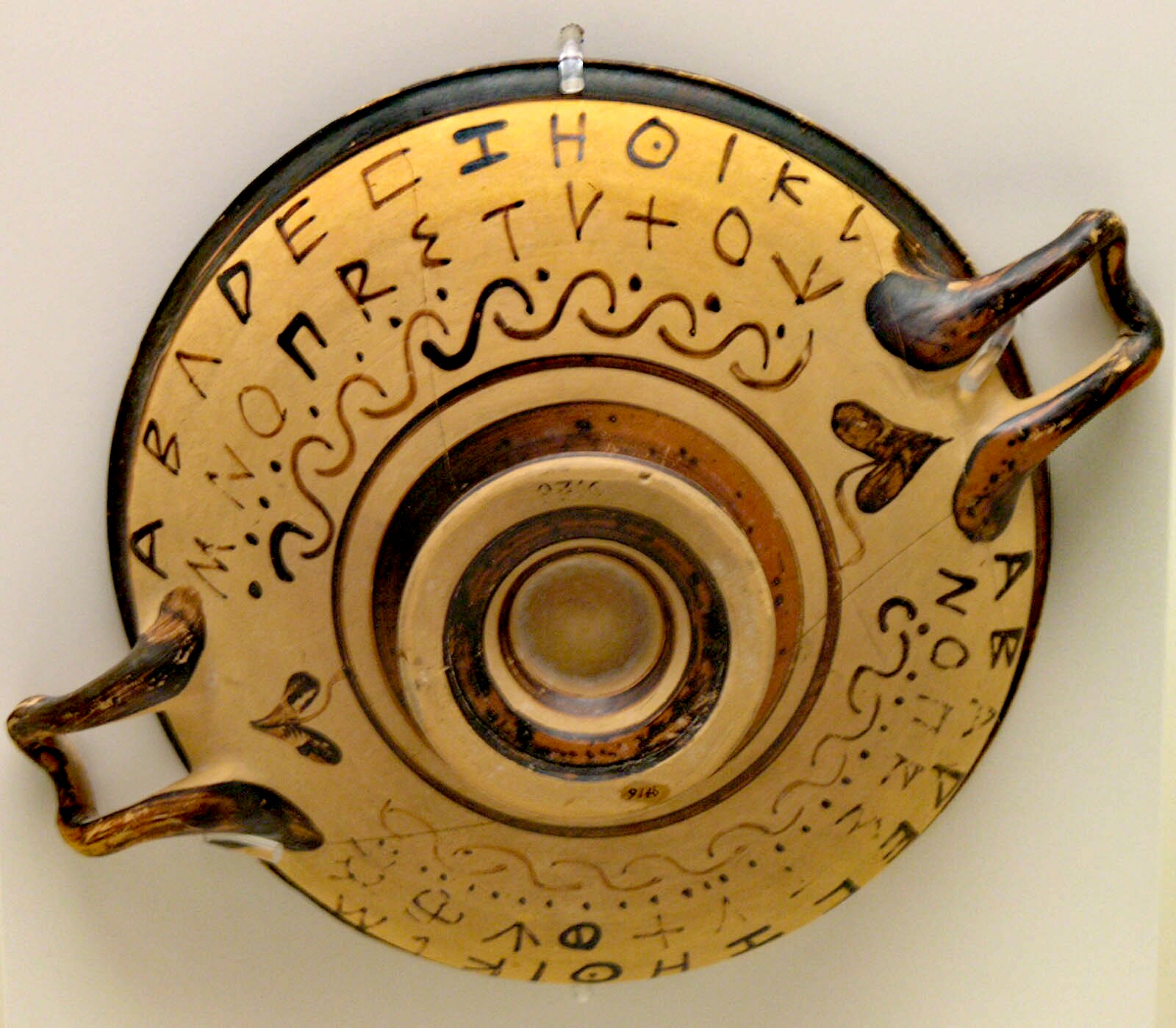 A letter is a segmental
symbol A symbol is a mark, sign, or word that indicates, signifies, or is understood as representing an idea, Object (philosophy), object, or wikt:relationship, relationship. Symbols allow people to go beyond what is known or seen by creating linkages ...
of a phonemic
writing system A writing system is a method of visually representing verbal communication Communication (from Latin ''communicare'', meaning "to share") is the act of developing Semantics, meaning among Subject (philosophy), entities or Organization, grou ...
. The inventory of all letters forms the
alphabet An alphabet is a standardized set of basic written symbols or graphemes (called letter (alphabet), letters) that represent the phonemes of certain spoken languages. Not all writing systems represent language in this way; in a syllabary, each ...
. Letters broadly correspond to
phoneme In phonology and linguistics, a phoneme is a unit of sound that distinguishes one word from another in a particular language. For example, in most List of dialects of English, dialects of English, with the notable exception of the West Midlan ...
s in the spoken form of the language, although there is rarely a consistent, exact correspondence between letters and phonemes. The word ''letter'', borrowed from
Old French Old French (, , ; French language, Modern French: ) was the language spoken in Northern France from the 8th century to the 14th century. Rather than a unified Dialect#Dialect or language, language, Old French was really a Linkage (linguistics), ...
''letre'', entered
Middle English Middle English (abbreviated to ME) was a form of the English language spoken after the Norman conquest of England, Norman conquest (1066) until the late 15th century. English language underwent distinct variations and developments following the O ...
around 1200 CE, eventually displacing the native English term ''bōcstaf'' ( bookstaff). ''Letter'' is descended from the Latin '' littera'', which may have descended from the Greek "διφθέρα" (writing tablet), via Etruscan.

A letter is a type of grapheme, which is a contrastive unit in a writing system. The contemporary English-language alphabet consists of twenty-six letters, each of which corresponds to one or more sounds. Letters are combined to form words. A letter is classified as either a consonant or a vowel, depending on how its sound is produced (vowels are ''a'', ''e'', ''i'', ''o'', ''u'', ''y'' and ''w—'' with ''y'' and ''w'' only sometimes classed as vowels). The basic Roman alphabet is used by hundreds of languages around the world. There are more phonemes in English–about 44–than there are letters of the alphabet. A letter may therefore be associated with more than one phoneme, with the phoneme determined by the surrounding letters or etymology of the word. Regional accents have a significant effect; the letter ''a'' can range from five to twelve sounds depending on the origin of the speaker. As an example of positional effects, the letter ''c'' is pronounced before ''a, o, u,'' or consonants (e.g. ''critical''), but is pronounced before ''e,'' ''i,'' or ''y'' (e.g. ''democracy''). Conversely, the same phoneme may be shared by more than one letter, as shown by the ''c'' and ''s'' in ''fence'' and ''tense''. A sequence of graphemes representing a phoneme is called a polygraph. A digraph is a case of polygraphy consisting of two graphemes. Examples of digraphs in English include ''ch'', ''sh'', and ''th''. A phoneme can also be represented by three letters, called a trigraph (orthography), trigraph. An example is the combination ''sch'' in German. Specific names are associated with letters, which may differ with language, dialect, and history. ''Z'', for example, is usually called ''zed'' in all English-speaking countries except the US, where it is named ''zee''. As elements of alphabets, letters have prescribed orders, although this too may vary by language. In Spanish, for instance, ''ñ'' is a separate letter, sorted after ''n''. In English, ''n'' and ''ñ'' are classified alike. Letters may also have a numerical or quantitative value. This applies to Roman numerals and the letters of other writing systems. In English, Arabic numerals are typically used instead of letters. Greek and Roman letters are used as mathematical symbols in equations and expressions. People and objects are sometimes named after letters, for one of these reasons: # The letter is an abbreviation, e.g. "G-man" as slang for a Federal Bureau of Investigation agent, arose as short for "Government Man" # Alphabetical order used as a counting system, e.g. Plan A, Plan B, etc.; alpha ray, beta ray, gamma ray, delta ray, etc. # The shape of the letter, e.g. A-clamp, A-frame, D-ring, F-clamp, G-clamp, Maze (HM Prison), H-block, H engine, O-ring, R-clip, U engine, U-bend, V engine, W engine, X engine, Z-drive, a river delta, river ''delta'', Block (meteorology)#Omega blocks, ''omega'' block # Other reasons, e.g. X-ray after "''x'' the unknown" in algebra, because the discoverer did not know what they were

The Consistori del Gay Saber was the first literary academy in the world and held the Floral Games to award the best troubadour with the ''violeta d'aur'' top prize. Guilhem Molinier, a member of the academy, gave a definition of the letter in his ''Leys d'Amors'' (1328–1337), a book aimed at regulating then-flourishing Occitan language, Occitan poetry:

Examples of alphabets and their letters

File:Venn diagram showing Greek, Latin and Cyrillic letters.svg, 263x263px, Venn diagram of letters in the Greek alphabet, Greek, Cyrillic Alphabet, Cyrillic and Latin alphabets. Certain letters appear in two or more of these alphabets, although they may not represent the same sound. Worldwide there are many alphabets used at present, with Arabic, Cyrillic, and Latin in widest use. The following alphabets, Abjad, abjads, and individual letters are discussed in related articles. Each represents a different script: The International Phonetic Alphabet is used to represent exact pronunciation, for example, ʔ, [ʔGlottal Stop, glottal stop. For other writing systems and their letters, see List of writing systems.

A letter can have multiple variants, or Allography, allographs, related to variation in style of handwriting or printing. Some writing systems have two major types of allographs for each letter: an ''uppercase'' form (also called ''capital'' or ''majuscule'') and a ''lower case, lowercase'' form (also called ''minuscule''). Upper- and lowercase letters represent the same sound, but serve different functions in writing. Capital letters are most often used at the beginning of a sentence, as the first letter of a proper name or title, or in headers or inscriptions. They may also serve other functions, such as in the German language where all nouns begin with capital letters. In practical terms, tests have proven that lowercase words are easier to read. They also take up less space on the page, a considerable benefit when materials such as paper and ink were scarce and valuable. The terms ''uppercase'' and ''lowercase'' originated in the days of handset type for printing presses. Individual letter blocks were kept in specific compartments of drawers in a type case. Capital letters were stored in a higher drawer or upper case.

A typeface, or font, is a single, stylistically consistent set of designs for an alphabet. A particular font may alter standard forms of characters, may present them with different optical weight, or may angle or embellish their forms. In calligraphy, letters are artistically handwritten and may or may not be consistent throughout a work. Typography has traditionally been considered an art form, encompassing both letter design and the relationship of the letters to one another. Type designers strive for clarity and beauty in individual letterforms, as well as character in a font. Old fonts such as Bodoni, Caslon, and Garamond have been in wide use for centuries, with only slight modifications. Advances in print capabilities, new ways of viewing the written word, and changing aesthetics have led to refinements of classic typefaces as well as the introduction of entirely new designs. In the early nineteenth century, sans serif typefaces were first created. Serifs are the finishing strokes of letters, small extensions considered to enhance readability. Sans serif fonts give a modern and informal impression, but are slightly less legible as text than serif faces. Without serifs, an uppercase ''I'' (i) is indistinguishable from a lowercase ''l'' (L).

The average distribution of letters, or the relative frequency of each letter's occurrence in text in a given language, can be obtained by analyzing large amounts of representative text. This information can be useful in cryptography and for other purposes, such as song lyrics. Letter frequencies vary in different types of writing.

Before there were alphabets there were pictographs: small pictures representing objects and concepts. Ancient Egyptian examples date to about 3000 BCE. The first consonantal alphabet found emerged around 1800 BCE to represent the language of the Phoenicians, Semitic people, Semitic workers in Egypt (see Middle Bronze Age alphabets), and was derived from the alphabetic principles of the Egyptian hieroglyphs. Our present Roman system derives from this Phoenician alphabet, which had 22 letters. Nineteen of our present letters evolved from the early Phoenician forms; letter shapes and order of appearance correspond closely. The Greek alphabet, adapted around 800 BCE, added four letters. This was the first alphabet assigning letters not only to consonant sounds, but also to vowels. The Roman Empire brought the development and refinement of our Roman alphabet, beginning around 500 BCE. The Romans added or dropped certain letters to accommodate Greek and Etruscan words; they also experimented with styles such as cursive when writing in ink. By about the fifth century CE, the beginnings of lowercase letterforms began to emerge in Roman writing, but they did not come into common use until the end of the Middle Ages, a thousand years later.