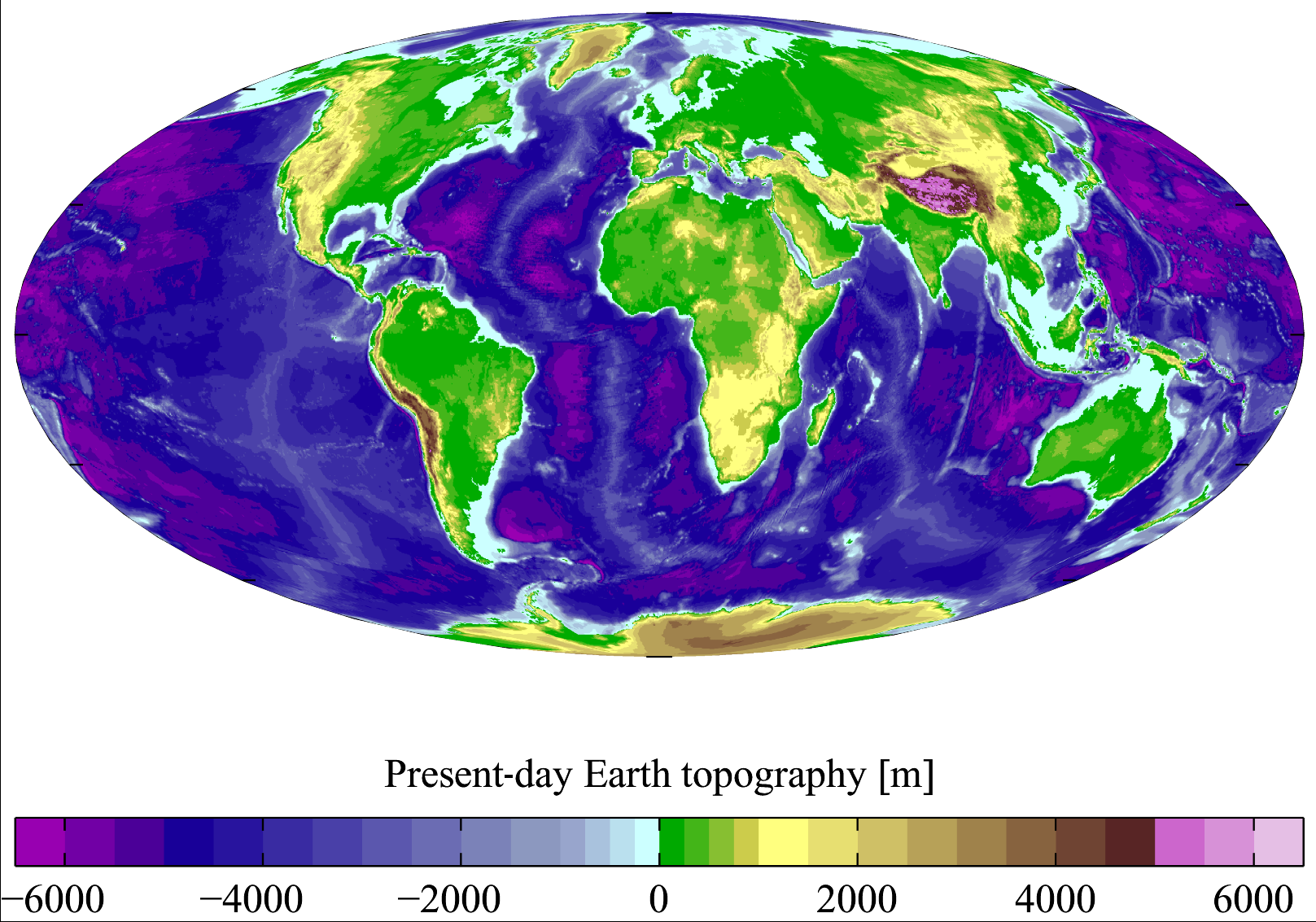 Land is the solid surface of the Earth that is not permanently covered by water. The vast majority of human activity throughout history has occurred in land areas that support agriculture, habitat, and various natural resources. Some life forms, including terrestrial plants and terrestrial animals, have developed from predecessor species that originated in bodies of water. Areas where land meets large bodies of water are called coastal zones. The division between land and water is a fundamental concept to humans. The demarcation line between land and water can vary by local jurisdiction and other factors. A maritime boundary is one example of a political demarcation. A variety of natural boundaries exist to help clearly define where water meets land. Solid rock landforms are easier to demarcate than marshy or swampy boundaries, where there is no clear point at which the land ends and a body of water has begun. Demarcation lines can further vary due to tides and weather. In reference to business terminology land is also associated with Factor of production, as well as land is the first factor of production and the income or profit earned with help of land is treated as rent.


History of land on Earth

The earliest material found in the Solar System is dated to (billion years ago); therefore, the Earth itself must have been formed by accretion around this time. By , the primordial Earth had formed. The formation and evolution of the Solar System bodies occurred in tandem with the Sun. In theory, a solar nebula partitions a volume out of a molecular cloud by gravitational collapse, which begins to spin and flatten into a circumstellar disc, which the planets then grow out of in tandem with the star. A nebula contains gas, ice grains and dust (including primordial nuclides). In nebular theory, planetesimals commence forming as particulate matter accrues by cohesive clumping and then by gravity. The assembly of the primordial Earth proceeded for 10–. Earth's atmosphere and oceans were formed by volcanic activity and outgassing that included water vapor. The origin of the world's oceans was condensation augmented by water and ice delivered by asteroids, proto-planets, and comets. In this model, atmospheric "greenhouse gases" kept the oceans from freezing while the newly forming Sun was only at 70% luminosity. By , the Earth's magnetic field was established, which helped prevent the atmosphere from being stripped away by the solar wind. The atmosphere and oceans of the Earth continuously shape the land by eroding and transporting solids on the surface. The crust, which currently forms the Earth's land, was created when the molten outer layer of the planet Earth cooled to form a solid mass as the accumulated water vapor began to act in the atmosphere. Once land became capable of supporting life, biodiversity evolved over hundreds of million years, expanding continually except when punctuated by mass extinctions. The two models that explain land mass propose either a steady growth to the present-day forms or, more likely, a rapid growth early in Earth history followed by a long-term steady continental area. Continents formed by plate tectonics, a process ultimately driven by the continuous loss of heat from the Earth's interior. On time scales lasting hundreds of millions of years, the supercontinents have formed and broken apart three times. Roughly (million years ago), one of the earliest known supercontinents, Rodinia, began to break apart. The continents later recombined to form Pannotia, 600–, then finally Pangaea, which also broke apart .

"Land area" (also known as "land mass") refers to the total surface area of the land of a geographical region or country (which may include discontinuous sections of land such as islands). Earth's total planimetric (flat) land area is approximately which is about 29.2% of its total surface, including that which is covered by ice. Water covers approximately 70.8% of planimetric Earth's surface, mainly in the form of oceans and ice formations; but this proportion is decreased by the land's increased terrain.

"Land cover" is the physical material at the surface of the earth. * Terrain and topsoil relief increase total land cover to approximately 64,000 million hectares (64 Gha) but proportions remain about the same

Creation myths in many religions recall a story involving the creation of the world by a supernatural deity or deities, including accounts wherein the land is separated from the oceans and the air. The Earth itself has often been personified as a deity, in particular a goddess. In many cultures, the mother goddess is also portrayed as a fertility deity. To the Aztecs, Earth was called ''Tonantzin''—"our mother"; to the Incas, Earth was called ''Pachamama''—"mother earth". The Chinese Earth goddess Hou Tu is similar to Gaia, the Greek goddess personifying the Earth. Bhuma Devi is the goddess of Earth in Hinduism, influenced by Graha. In Norse mythology, the Earth giantess Jörð was the mother of Thor and the daughter of Annar. Ancient Egyptian mythology is different from that of other cultures because Earth (Geb) is male and sky (Nut) is female. In the past, there were varying levels of belief in a flat Earth. The Jewish conception of a flat earth is found in both biblical and post-biblical times.right|thumb|''Imago Mundi'' Babylonian map, the oldest known world map, 6th century BC Babylonia. In early Egyptian and Mesopotamian thought, the world was portrayed as a flat disk floating in the ocean. The Egyptian universe was pictured as a rectangular box with a north–south orientation and with a slightly concave surface, with Egypt in the center. A similar model is found in the Homeric account of the 8th century BC in which "Okeanos, the personified body of water surrounding the circular surface of the Earth, is the begetter of all life and possibly of all gods." The biblical earth is a flat disc floating on water. The Pyramid Texts and Coffin Texts reveal that the ancient Egyptians believed Nun (the ocean) was a circular body surrounding ''nbwt'' (a term meaning "dry lands" or "islands"), and therefore believed in a similar Ancient Near Eastern circular Earth cosmography surrounded by water. The spherical form of the Earth was suggested by early Greek philosophers, a belief espoused by Pythagoras. Contrary to popular belief, most educated people in the Middle Ages did not believe the Earth was flat: this misconception is often called the "Myth of the Flat Earth". As evidenced by thinkers such as Thomas Aquinas, the European belief in a spherical Earth was widespread by this point in time. Prior to circumnavigation of the planet and the introduction of space flight, belief in a spherical Earth was based on observations of the secondary effects of the Earth's shape and parallels drawn with the shape of other planets.

Most planets known to humans are either gaseous Jovian planets or solid terrestrial planets. Terrestrial planets include Mercury, Venus, Earth, and Mars. These inner planets have a rocky surface with metal interiors. The Jovian planets consist of Jupiter, Saturn, Uranus, and Neptune. While these planets are larger, their only land surface is a small rocky core surrounded by a large, thick atmosphere. The gas giants, Jupiter and Saturn, are thought to have surface layers composed of liquid hydrogen rather than solid land; however, their planetary geology is not well understood. The possibility of Uranus and Neptune (the ice giants) possessing hot, highly compressed, supercritical water under their thick atmospheres has been hypothesised. While their composition is still not fully understood, a 2006 study by Wiktorowicz et al. ruled out the possibility of such a water "ocean" existing on Neptune, though some studies have suggested that exotic oceans of liquid diamond are possible. The entire surface of a rocky planet or moon is considered land, even with a lack of seas or oceans for contrast. Planetary bodies that have a thin atmosphere often have land that is marked by impact craters since atmospheric conditions would normally break-down incoming objects and erode rough impact sites. Land on planetary bodies other than Earth can also be bought and sold although ownership of extraterrestrial real estate is not recognized by any authority.

The land of the Earth interacts with and influences climate heavily since the surface of the land heats up and cools down faster than air or water. Latitude, elevation, topography, reflectivity, and land use all have varying effects. The latitude of the land will influence how much solar radiation reaches the surface. High latitudes receive less solar radiation than low latitudes. The height of the land is important in creating and transforming airflow and precipitation on Earth. Large landforms, such as mountain ranges, divert wind energy and make the air parcel less dense and able to hold less heat. As air rises, this cooling effect causes condensation and precipitation. Reflectivity of the earth is called planetary albedo and the type of land cover that receives energy from the sun affects the amount of energy that is reflected or transferred to Earth. Vegetation has a relatively low albedo meaning that vegetated surfaces are good absorbers of the sun's energy. Forests have an albedo of 10–15% while grasslands have an albedo of 15–20%. In comparison, sandy deserts have an albedo of 25–40%. Land use by humans also plays a role in the regional and global climate. Densely populated cities are warmer and create urban heat islands that have effects on the precipitation, cloud cover, and temperature of the region.