Lake Erie is the fourth-largest lake (by surface area) of the five Great Lakes in North America and the eleventh-largest globally. It is the southernmost, shallowest, and smallest by volume of the Great Lakes and therefore also has the shortest average water residence time. At its deepest point Lake Erie is deep. Situated on the International Boundary between Canada and the United States, Lake Erie's northern shore is the Canadian province of Ontario, specifically the Ontario Peninsula, with the U.S. states of Michigan, Ohio, Pennsylvania, and New York on its western, southern, and eastern shores. These jurisdictions divide the surface area of the lake with water boundaries. Situated below Lake Huron, Erie's primary inlet is the Detroit River. The main natural outflow from the lake is via the Niagara River, which provides hydroelectric power to Canada and the U.S. as it spins huge turbines near Niagara Falls at Lewiston, New York and Queenston, Ontario. Some outflow occurs via the Welland Canal, part of the Saint Lawrence Seaway, which diverts water for ship passages from Port Colborne, Ontario on Lake Erie, to St. Catharines on Lake Ontario, an elevation difference of . Lake Erie's environmental health has been an ongoing concern for decades, with issues such as overfishing, pollution, algae blooms, and eutrophication generating headlines. 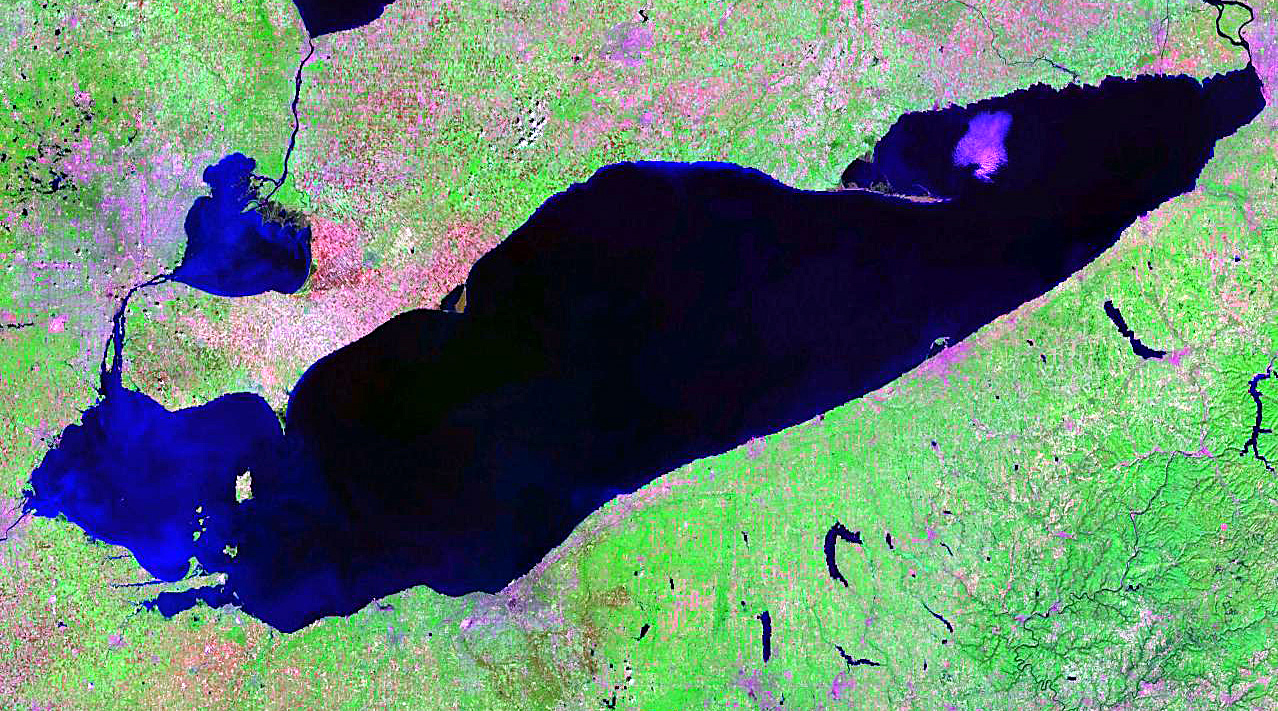 Lake Erie (42.2° N, 81.2W) has a mean elevation of above sea level. It has a surface area of with a length of and breadth of at its widest points. It is the shallowest of the Great Lakes with an average depth of 10 fathoms 3 feet or and a maximum depth of Because Erie is the shallowest, it is also the warmest of the Great Lakes, and in 1999 this almost became a problem for two nuclear power plants which require cool lake water to keep their reactors cool. The warm summer of 1999 caused lake temperatures to come close to the limit necessary to keep the plants cool. Also because of its shallowness, it is the first to freeze in the winter. The shallowest section of Lake Erie is the western basin where depths average only ; as a result, "the slightest breeze can kick up lively waves," also known as seiches. The "waves build very quickly", according to other accounts. The region around the lake is known as the "thunderstorm capital of Canada" with "breathtaking" lightning displays. Sometimes fierce waves springing up unexpectedly have led to dramatic rescues; in one instance, a Cleveland resident trying to measure the dock near his house became trapped but was rescued by a fire department diver from Avon Lake, Ohio: Lake Erie is primarily fed by the Detroit River (from Lake Huron and Lake St. Clair) and drains via the Niagara River and Niagara Falls into Lake Ontario. Navigation downstream is provided by the Welland Canal, part of the Saint Lawrence Seaway. Other major contributors to Lake Erie include Grand River, Huron River, Maumee River, Sandusky River, Buffalo River, and Cuyahoga River. The drainage basin covers . Point Pelee National Park, the southernmost point of the Canadian mainland, is located on a peninsula extending into the lake. Lake Erie has 31 islands (13 in Canada, 18 in the U.S.), located generally in the western side of the lake. Pelee Island is the largest of the Lake Erie islands. Major cities along Lake Erie include Buffalo, New York; Erie, Pennsylvania; Cleveland, Ohio, and Toledo, Ohio.

Lake Erie has a lake retention time of 2.6 years,