Foer was born in Washington, D.C. as the son of Albert Foer, a lawyer and president of the American Antitrust Institute, and Esther Safran Foer, a child of Holocaust survivors born in Poland, who is now Senior Advisor at the Sixth & I Historic Synagogue. Foer is the middle son of a Jewish family. His older brother, Franklin, is a former editor of ''The New Republic'' and his younger brother, Joshua, is the founder of ''Atlas Obscura'' and of Sefaria. Foer was a "flamboyant" and sensitive child who, at the age of 8, was injured in a classroom chemical accident that resulted in "something like a nervous breakdown drawn out over about three years," during which "he wanted nothing, except to be outside his own skin." Foer attended Georgetown Day School and in 1994 traveled to Israel with other North American Jewish teenagers in a program sponsored by Bronfman youth fellowships. In 1995, while a freshman at Princeton University, he took an introductory writing course with author Joyce Carol Oates, who took an interest in his writing, telling him that he had "that most important of writerly qualities, energy." Foer later recalled that "she was the first person to ever make me think I should try to write in any sort of serious way. And my life really changed after that." Foer graduated with an A.B. in philosophy from Princeton in 1999 after completing a 40-page-long senior thesis, titled "Before Reading The Book of Anticedents: Intention, Literary Interpretation, and the Hypothesized Author", under the supervision of Gideon Rosen. Oates served as the advisor to Foer's creative writing senior thesis, an examination of the life of his maternal grandfather, the Holocaust survivor Louis Safran. For his thesis, Foer received Princeton's Senior Creative Writing Thesis Prize. After graduating from Princeton, Foer briefly attended the Mount Sinai School of Medicine before dropping out to pursue his writing career.

Foer graduated from Princeton in 1999 with a degree in philosophy, and traveled to Ukraine to expand his thesis. In 2001, he edited the anthology ''A Convergence of Birds: Original Fiction and Poetry Inspired by the Work of Joseph Cornell'', to which he contributed the short story, "If the Aging Magician Should Begin to Believe". His Princeton thesis grew into a novel, ''Everything Is Illuminated'', which was published by Houghton Mifflin in 2002. The book earned him a National Jewish Book Award (2001) and a Guardian First Book Award (2002). Foer shared the PEN/Robert W. Bingham Prize with fellow authors Will Heinrich and Monique Truong in 2004. In 2005, Liev Schreiber wrote and directed a film adaptation of the novel, which starred Elijah Wood. Foer's second novel ''Extremely Loud & Incredibly Close'', was published in 2005. In it, Foer used 9/11 as a backdrop for the story of 9-year-old Oskar Schell, who learns how to deal with the death of his father in the World Trade Center. The novel used writing techniques known as visual writing. It follows multiple but interconnected storylines, is peppered with photographs of doorknobs and other such oddities, and ends with a 14-page flipbook. Foer's use of these techniques resulted in both praise and excoriation from critics. Warner Bros. and Paramount turned the novel into a film, produced by Scott Rudin and directed by Stephen Daldry. Foer wrote the libretto for an opera titled ''Seven Attempted Escapes From Silence'', which premiered at the Berlin State Opera on September 14, 2005. 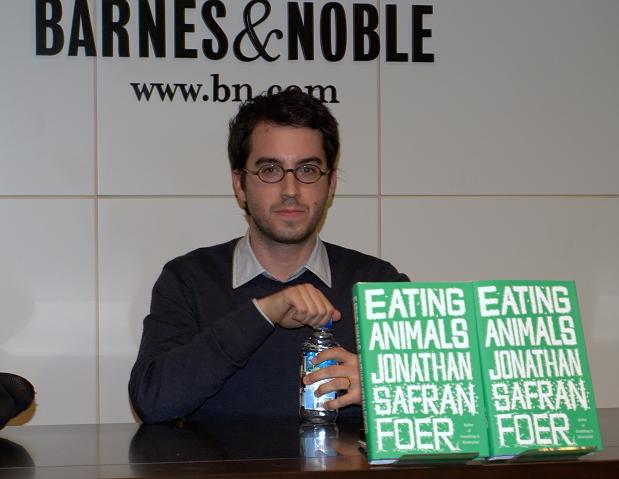 In spring 2008, Foer taught writing for the first time as a visiting professor of fiction at Yale University. He is currently a writer-in-residence in the graduate creative writing program at New York University. Foer published his third novel, ''Tree of Codes'', in November 2010. In March 2012, ''The New American Haggadah'', edited by him and translated by Nathan Englander, was released to mixed reviews. In 2009, Foer published his third book, ''Eating Animals''. A ''New York Times'' bestseller, ''Eating Animals'' provides a morally dense discussion of some of the ramifications that followed the proliferation of factory farms. It attempts to explain why and how humans can be so loving to our companion animals while simultaneously being indifferent to others, and explores what this inconsistency tells us about ourselves―what kinds of stories emerge from this selectivity. The book offers a significant focus on "storytelling"―the title of both the first and the last chapters of the book. Storytelling is Foer's way of recognizing and dealing with the complexity of the subject that is eating animals, and suggests that, ultimately, our food choices tell stories about who we are, or, as Foer has it in his book, "stories about food are stories about us―our history and our values." In May 2012, Foer signed a two-book deal with Little, Brown. His novel, ''Escape From Children's Hospital'', was due for publication in 2014, but is no longer on the publisher's schedule. In September 2016, he released the novel ''Here I Am''. In 2019 as part of the book tour for
We Are the Weather: Saving the Planet Begins at Breakfast
Foer took part in an on stage conversation with'' Samin Nosrat about eating and climate change,
"Salt, Fat, Acid, Heat" meets "We Are the Weather: Saving the Planet Begins at Breakfast."
' Foer also serves as a board member for Farm Forward, a nonprofit organization that implements innovative strategies to promote conscientious food choices, reduce farmed animal suffering, and advance sustainable agriculture.

Foer has been an outspoken critic of the meat industry. In 2006 he recorded the narration for the documentary ''If This is Kosher...'', an exposé of the kosher certification process that advocates Jewish vegetarianism. Foer's first book of non-fiction, ''Eating Animals'' (2009), addresses problems associated with industrialized meat and the ensuing ethical concerns. He said that he had long been "uncertain about how I felt bout eating meat and that the birth of his first child inspired "an urgency because I would have to make decisions on his behalf". In the wake of the COVID-19 pandemic, Foer reiterated his argument that Americans should eat less meat on account of the meat industry's social, environmental, and humanitarian consequences. In his personal life, Foer has been an occasional vegetarian since the age of 10.

Because of Foer's frequent use of modernist literary devices, some view him as a very polarizing figure in modern literature. In his critical article "Extremely Loud and Incredibly Close," Harry Siegel wrote in the ''New York Press'', "Foer is supposed to be our new Philip Roth, though his fortune-cookie syllogisms and pointless illustrations and typographical tricks don't at all match up to or much resemble Roth even at his most inane." Other criticism is historical inaccuracy in Everything Is Illuminated. ''The Huffington Post'' contributor Anis Shivani included him in his list of the fifteen most overrated modern American writers.

on Foer; includes numerous links to articles, interview and information.
Who is Augustine?
Exploratory site for Jonathan Safran Foer's 'Everything Is Illuminated' (Novel)
Jonathan Safran Foer 'Bookweb'
on literary website The Ledge, with suggestions for further reading.
"Who in the world is JSF?"
– interview with the St. Petersburg Times of Tampa Bay, Florida.
Author interview in Guernica Magazine (Guernicamag.com)