According to the United States Census Bureau, the Houston–The Woodlands–Sugar Land metropolitan statistical area has a total area of 10,062 square miles (26,060 km2), of which are land and are covered by water. The region is slightly smaller than the state of Massachusetts and slightly larger than New Jersey. The U.S. Office of Management and Budget combines the Houston–The Woodlands–Sugar Land metropolis with four micropolitan statistical areas (Bay City, Brenham, El Campo, and Huntsville) to form the Houston–The Woodlands, TX combined statistical area. The metropolitan area is located in the Gulf Coastal Plains biome, and its vegetation is classified as temperate grassland. Much of the urbanized area was built on forested land, marshes, swamp, or prairie, remnants of which can still be seen in surrounding areas. Of particular note is the Katy Prairie to the west, the Big Thicket to the northeast, and the Galveston Bay ecosystem to the south. Additionally, the metropolitan region is crossed by a number of creeks and bayous, which provide essential drainage during rainfall events; some of the most notable waterways include Buffalo Bayou (upon which Houston was founded), White Oak Bayou, Brays Bayou, Spring Creek, and the San Jacinto River. The upper drainage basin of Buffalo Bayou is impounded by two large flood control reservoirs, Barker Reservoir and Addicks Reservoir, which provide a combined of storage during large rainfall events and cover a total land area of . Greater Houston's flat topography, susceptibility to high-intensity rainfall events, high level of impervious surface, and inadequately-sized natural drainage channels make it particularly susceptible to catastrophic flooding events.

Underpinning Greater Houston's land surface are unconsolidated clays, clay shales, and poorly cemented sands up to several miles deep. The region's geology developed from stream deposits formed from the erosion of the Rocky Mountains. These sediments consist of a series of sands and clays deposited on decaying organic matter that, over time, transformed into oil and natural gas. Beneath these tiers is a water-deposited layer of halite, a rock salt. The porous layers were compressed over time and forced upward. As it pushed upward, the salt dragged surrounding sediments into dome shapes, often trapping oil and gas that seeped from the surrounding porous sands. This thick, rich soil also provides a good environment for rice farming in suburban outskirts into which the city of Houston continues to grow near Katy. Evidence of past rice farming is even still evident in developed areas as an abundance of rich, dark, loamy topsoil exists. The Greater Houston region is generally earthquake-free. While the city of Houston contains over 150 to 300 active surface faults with an aggregate length of up to 310 miles (500 km), the clay below the surface precludes the buildup of friction that produces ground-shaking in earthquakes. These faults generally move at a smooth rate in what is termed "fault creep".

Greater Houston has a humid subtropical climate typical of the Southern United States. It is rainy most of the year. Prevailing winds come from the south and southeast during most of the year, which bring heat and moisture from the nearby Gulf of Mexico and Galveston Bay Area.

A number of tropical storms and hurricanes have hit the metropolitan area, including: * 1900 Galveston Hurricane, which devastated Galveston and was the deadliest natural disaster in United States history, killing between 8,000 and 12,000. * Hurricane Carla (1961), which was the most recent Category 4 hurricane to strike Texas until Harvey in 2017. * Hurricane Alicia (1983), which struck the area as a Category 3, and was at the time, the costliest Atlantic hurricane. * Tropical Storm Allison (2001), until Harvey, which brought the worst flooding in Houston history and was the first tropical storm to be retired. * Hurricane Rita (2005), which triggered one of the largest evacuations in United States history in the wake of Hurricane Katrina. * Hurricane Ike (2008), which brought devastating storm surge to the coast and wind damage into the city. * Hurricane Harvey (2017), which brought devastating flooding that resulted in excess of $100 billion in damages to Southeast Texas. 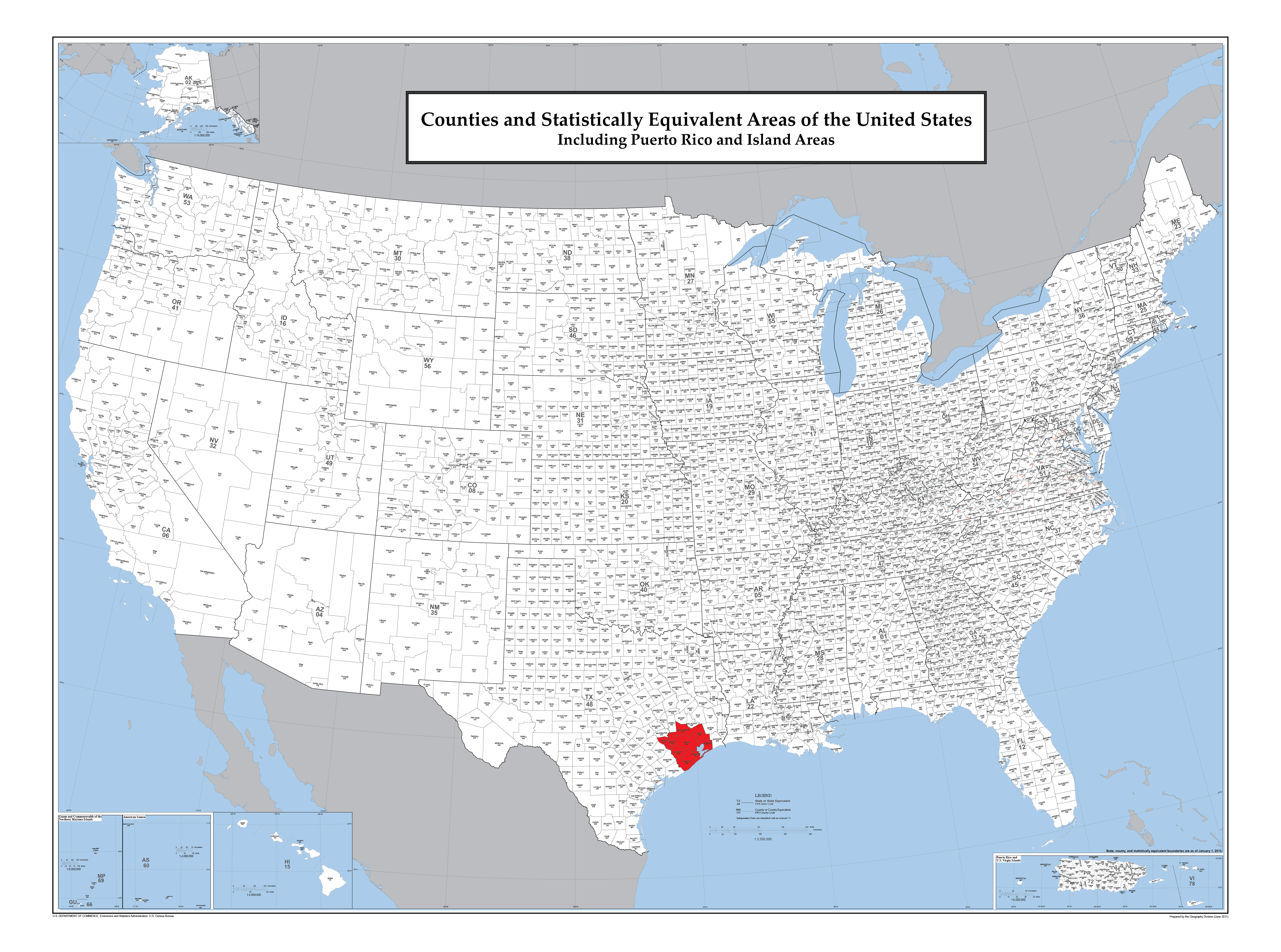 There were a total of 6,997,384 residents within the Greater Houston metropolitan area as of 2018 and an estimated 7 million in 2019, according to the United States Census Bureau. In 2010, Greater Houston had 5,920,416 residents and in 2000, it had a population of 4,177,646. Another 2010 estimate determined the population increased to 5,920,487. Of the population an estimated 575,000 were undocumented immigrants according to 2014 estimates. In 2019, Greater Houston's racial and ethnic makeup was 35% White, 17% Black and African American, 8% Asian, 2% from two or more races, and 38% Hispanics and Latin Americans of any race. Of its metropolitan population, roughly 23.4% were foreign-born. The largest foreign-born population came from Latin America, followed by Asia, Africa, Europe and other parts of North America. The metropolitan statistical area was classified as one of the largest regions where the three largest minority groups were highly represented. In 2018, its racial and ethnic makeup had an estimated 35.5% non-Hispanic whites, 17% Blacks and African Americans, 7.6% Asian Americans, 2.1% other races, and 37.6% Hispanics and Latin Americans of any race. Nearly one in four Greater Houstonians were foreign-born in 2018 and a quarter of all refugees settled in Texas lived in the region. According to the 2019 American Community Survey, the median household income was $69,193 and the per capita income was $35,190. Roughly 13% of the metropolis lived at or below the poverty line. As of 2011, Greater Houston has four of Texas's 10 wealthiest communities, which include the wealthiest community, Hunters Creek Village, the fourth-wealthiest community, Bunker Hill Village, the fifth-wealthiest community, West University Place, and the sixth-wealthiest community, Piney Point Village. Greater Houston's religious community is predominantly Christian and the second-largest metropolitan area that identifies with the religion in Texas after Dallas–Fort Worth (73%). In 2012, the city of Houston proper ranked the ninth most religious city in the U.S. Within the Greater Houston metropolitan area, the Catholic Church is the largest single Christian denomination. Catholics in Houston are primarily served by the Roman Catholic Archdiocese of Galveston–Houston. Following, the body of Evangelical Protestantism was the second largest. Baptists dominated the Evangelical Protestant demographic. Mainline Protestantism, led by Methodists, was the third largest Christian group. Non-Christian religions collectively made up 7% of the religious metropolitan population. The largest non-Christian religion was Judaism. According to the study, 20% of Greater Houston was irreligious and 2% were atheist.

Among the 10 most populous metropolitan areas in the U.S., Greater Houston ranked first in employment growth rate and second in nominal employment growth. In 2006, the Greater Houston metropolitan area ranked first in Texas and third in the U.S. within the category of "Best Places for Business and Careers" by ''Forbes''. The Houston–The Woodlands-Sugar Land area's gross metropolitan product (GMP) in 2005 was $308.7 billion, up 5.4% from 2004 in constant dollars—slightly larger than Austria's gross domestic product. By 2012, the GMP had risen to $449 billion, the fourth-largest of any metropolitan area in the United States. Only 26 countries other than the United States had a GDP exceeding Greater Houston's GAP. Mining, which in the area is almost entirely oil and gas exploration and production, accounted for 11% of Greater Houston's GAP—down from 21% as recently as 1985. The reduced role of oil and gas in Houston's GAP reflects the rapid growth of other sectors—such as engineering services, health services, retail, and manufacturing.