Click Here for Items Related To - Federal subjects of Russia


The federal subjects of Russia, also referred to as the subjects of the Russian Federation (russian: субъекты Российской Федерации|subyekty Rossiyskoy Federatsii) or simply as the subjects of the federation (russian: субъекты федерации|subyekty federatsii), are the constituent entities of Russia, its top-level political divisions according to the Constitution of Russia. Since March 18, 2014, the Russian Federation constitutionally consists of 85 federal subjects. The two located on the Crimean Peninsula, Sevastopol and the Republic of Crimea, are not internationally recognized as part of Russia. Kaliningrad Oblast is the only federal subject separated by other countries. According to the Russian Constitution, the Russian Federation consists of republics, krais, oblasts, cities of federal importance, an autonomous oblast and autonomous okrugs, all of which are equal subjects of the Russian Federation. Three Russian cities of federal importance (Moscow, Saint Petersburg, and Sevastopol) have a status of both city and separate federal subject which comprises other cities and towns (Zelenograd, Troitsk, Kronstadt, Kolpino, etc.) within each federal city—keeping older structures of postal addresses. In 1993 the Russian Federation comprised 89 federal subjects. By 2008, the number of federal subjects had decreased to 83 because of several mergers. In 2014 Sevastopol and the Republic of Crimea became the 84th and 85th federal subjects of Russia. Every federal subject has its own head, a parliament, and a constitutional court. Each federal subject has its own constitution and legislation. Subjects have equal rights in relations with federal government bodies. The federal subjects have equal representation—two delegates each—in the Federation Council, the upper house of the Federal Assembly. They do, however, differ in the degree of autonomy they enjoy (asymmetric federalism). Post-Soviet Russia formed during the history of the Russian Soviet Federative Socialist Republic within the USSR and did not change at the time of the dissolution of the Soviet Union in 1991. In 1992, during so-called "parade of sovereignties", separatist sentiments and the War of Laws within Russia, the Russian regions signed the Federation Treaty (russian: Федеративный договор ''Federativny Dogovor''), establishing and regulating the current inner composition of Russia, based on the division of authorities and powers among Russian government bodies and government bodies of constituent entities. The Federation Treaty was included in the text of the 1978 Constitution of the Russian SFSR. The current Constitution of Russia, adopted by national referendum on 12 December 1993, came into force on and abolished the model of the Soviet system of government introduced in 1918 by Vladimir Lenin and based on the right to secede from the country and on unlimited sovereignty of federal subjects (in practice secession was never allowed), which conflicts with the country's integrity and federal laws. The new constitution eliminated a number of legal conflicts, reserved the rights of the regions, introduced local self-government and did not grant the Soviet-era right to secede from the country. In the late 1990s and early 2000s, the political system became ''de jure'' closer to other modern federal states with a republican form of government in the world. In the 2000s, following the policy of Vladimir Putin and of the United Russia party (dominant party in all federal subjects), the Russian parliament changed the distribution of tax revenues, reduced the number of elections in the regions and gave more power to the federal authorities.

Each federal subject belongs to one of the following types: 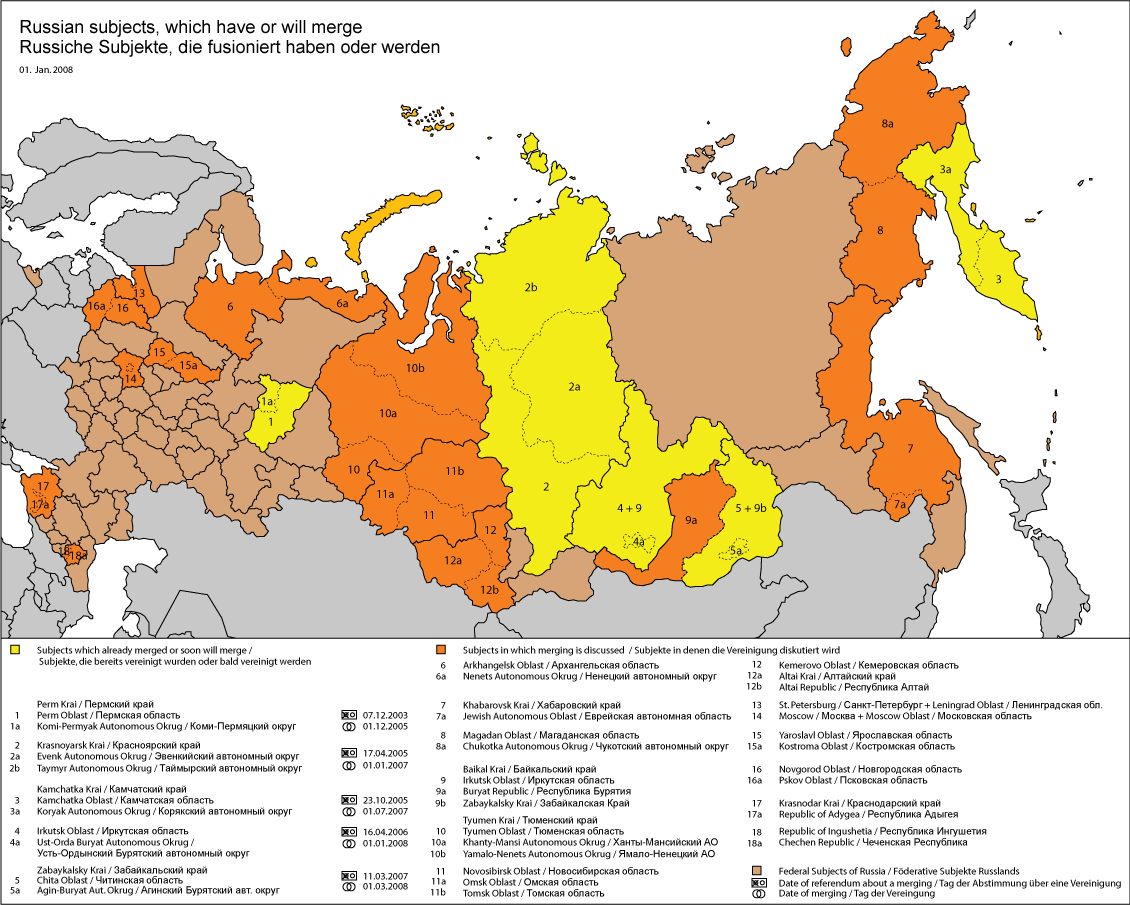 Starting in 2005, some of the federal subjects were merged into larger territories. In this process, six very sparsely populated subjects (comprising in total 0.3% of the population of Russia) were integrated into more populated subjects, with the hope that the economic development of those territories would benefit from the much larger means of their neighbours. The merging process was finished on 1 March 2008. No new mergers have been planned since March 2008. The six territories became "administrative-territorial regions with special status". They have large proportions of minorities, with Russians being a majority only in three of them. Four of those territories have a second official language in addition to Russian: Buryat (in two of the merged territories), Komi-Permian, Koryak. This is an exception: all the other official languages of Russia (other than Russian) are set by the Constitutions of its constituent Republics (Mordovia, Chechnya, Dagestan etc.). The status of the "administrative-territorial regions with special status" has been a subject of criticism because it does not appear in the Constitution of the Russian Federation. In addition to those six territories that entirely ceased to be subjects of the Russian Federation and were downgraded to territories with special status, another three subjects have a status of subject but are simultaneously part of a more populated subject: * Nenets Autonomous Okrug (2010 population of 42090) is a subject since 1993, but is also, according to its Constitution, a part of Arkhangelsk Oblast *Khanty-Mansi Autonomous Okrug obtained autonomy in 1977, but is simultaneously part of Tyumen Oblast *Yamalo-Nenets Autonomous Okrug obtained the status of subject in 1992 (after obtaining autonomy in 1977), but is also part of Tyumen Oblast. With an estimated population of 49348 as of 2018, Chukotka is currently the least populated subject of Russia that is not part of a more populated subject. It was separated from Magadan Oblast in 1993. Chukotka is one of the richest subjects of Russia (with a GRP per capita equivalent to that of Australia) and therefore does not fit in the pattern of merging a subject to benefit from the economic dynamism of the neighbour. In 1992, Ingushetia separated from Chechnya, both to stay away from the growing violence in Chechnya and as a bid to obtain the Eastern part of Northern Ossetia (it did not work: the Chechen conflict spread violence to Ingushetia, and North Ossetia retained its Prigorodny District). Those two Muslim republics, populated in vast majority (95%+) by closely related Vainakh people, speaking Vainakhish languages, remain the two poorest subjects of Russia, with the GRP per capita of Ingushetia being equivalent to that of Iraq. According to 2016 statistics, however they are also the safest regions of Russia, and also have the lowest alcohol consumption, with alcohol poisoning at least 40 times lower than the national average. Until 1994, Sokolsky District, Nizhny Novgorod Oblast was part of Ivanovo Oblast. In 2011–2012, the territory of Moscow increased by 140% (to ) by acquiring part of Moscow Oblast. On 13 May 2020, the governors of Arkhangelsk Oblast and Nenets Autonomous Okrug announced their plan to merge following the collapse of oil prices stemming from the COVID-19 pandemic. The process was scrapped on July 2.