Click Here for Items Related To - Demographics of Angola 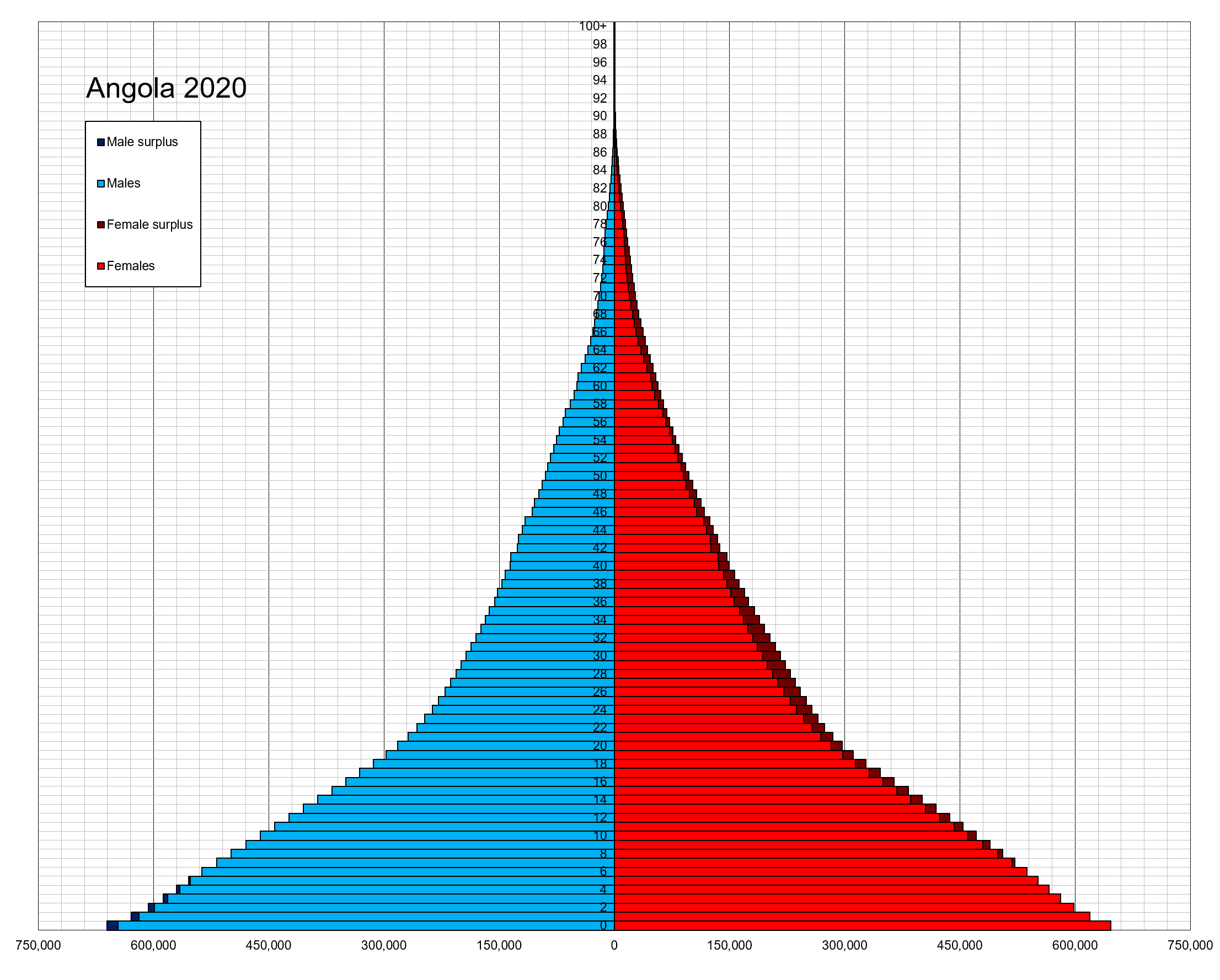 , ethnicity, education level, health of the populace, economic status, religious affiliations and other aspects of the population. , Data of FAO, year 2005 ; Number of inhabitants in thousands. According to 2014 census data, Angola had a population of 25,789,024 inhabitants in 2014. Ethnically, there are three main groups, each speaking a Bantu language: the Ovimbundu who represent 37% of the population, the Ambundu with 25%, and the Bakongo 13%. Other numerically important groups include the closely interrelated Chokwe and Lunda, the Ganguela and Nyaneka-Khumbi (in both cases classification terms that stand for a variety of small groups), the Ovambo people, Ovambo, the Herero people, Herero, the Xindonga and scattered residual groups of San people, San. In addition, mixed race (European and African) people amount to about 2%, with a small (1%) population of whites, mainly ethnically Portuguese people, Portuguese. As a Angola (Portugal), former overseas territory of Portugal until 1975, Angola possesses a Portuguese population of over 200,000, a number that has been growing from 2000 onwards, because of Angola's growing demand for qualified human resources. Currently, over 300,000 Angolans are white, 1 million Angolans are mixed race (black and white) and 50,000 Angolans are from China, which accounts for 1.35 million people. In 1974, white Angolans made up a population of 330,000 to 350,000 people in an overall population of 6.3 million Angolans at that time. The only reliable source on these numbers is Gerald Bender & Stanley Yoder, ''Whites in Angola on the Eve of Independence: The Politics of Numbers'', ''Africa Today'', 21 (4) 1974, pp. 23 – 37. Today, many Angolans who are not ethnic Portuguese can claim Portuguese nationality under Portuguese law. Estimates on the overall population are given i
O País
/ref> Besides the Portuguese, significant numbers of people from other European and from diverse Latin American countries (especially Brazil) can be found. From the 2000s, many Chinese have settled and started up small businesses, while at least as many have come as workers for large enterprises (construction or other). Observers claim that the Chinese community in Angola might include as many as 300,000 persons at the end of 2010, but reliable statistics are not at this stage available. In 1974/75, over 25,000 Cuban soldiers arrived in Angola to help the MPLA forces at the beginning of the Angolan Civil War. Once this was over, a massive development cooperation in the field of health and education brought in numerous civil personnel from Cuba. However, only a very small percentage of all these people has remained in Angola, either for personal reasons (intermarriage) or as professionals (e.g., medical doctors). The largest religious denomination is Catholic Church, Catholicism, to which adheres about half the population. Roughly 26% are followers of traditional forms of Protestantism (Congregationals, Methodists, Baptista, Lutherans, Reformed), but over the last decades there has in addition been a growth of Pentecostal communities and African Initiated Churches. In 2006, one out of 221 people were Jehovah's Witnesses. Blacks from Mali, Nigeria and Senegal are mostly Sunnite Muslims, but do not make up more than 1 - 2% of the population. By now few Angolans retain African traditional religions following different ethnic faiths.

Registration of vital events is in Angola not complete. The Population Department of the United Nations and the CIA World Factbook prepared the following estimates.

According to the CIA World Factbook, 2% of adults (aged 15–49) are living with HIV/AIDS (as of 2009). The risk of contracting disease is very high. There are food and waterborne diseases, bacterial and protozoal diarrhea, hepatitis A, and typhoid fever; vectorborne diseases, malaria, African trypanosomiasis (sleeping sickness); respiratory disease: meningococcal meningitis, and schistosomiasis, a water contact disease, as of 2005.

Roughly 37% of Angolans are Ovimbundu, 25% are Ambundu, 13% are Bakongo, 2% are mestiço, 1-2% are White Africans of European ancestry, white Africans, and people from other African ethnicities make up 22% of Angola's population.

Angola is a majority Christian country. Official statistics do not exist, however it is estimated that over 80% belong to a Christian church or community. More than half are Catholic Church, Catholic, the remaining ones comprising members of traditional Protestant churches as well as of Pentecostalism, Pentecostal communities. Only 0.1% are Muslims - generally immigrants from other African countries. Traditional indigenous religions are practiced by a very small minority, generally in peripheral rural societies.

Portuguese language, Portuguese is the official language of Angola, but Bantu language, Bantu and other African languages are also widely spoken. In fact, Kikongo, Kimbundu languages, Kimbundu, Umbundu, Chokwe language, Tuchokwe, Ganguela, Nganguela, and Kwanyama dialect, Ukanyama have the official status of "national languages". The mastery of Portuguese is widespread; in the cities the overwhelming majority are either fluent in Portuguese or have at least a reasonable working knowledge of this language; an increasing minority are native Portuguese speakers and have a poor, if any, knowledge of an African language.