Cowboy boots refer to a specific style of riding boot, historically worn by cowboys. They have a high heel that is traditionally made of stacked leather, rounded to pointed toe, high shaft, and, traditionally, no lacing. Cowboy boots are normally made from cowhide leather, which may be decoratively hand tooled, but are also sometimes made from "exotic" skins like alligator, snake, ostrich, lizard, eel, elephant, stingray, elk, buffalo, and so on. There are two basic styles of cowboy boots, western (or classic), and roper. The classic style is distinguished by a tall boot shaft, going to at least mid-calf, with an angled "cowboy" heel, usually over one inch high. A slightly lower, still angled, "walking" heel is also common. The toe of western boots was originally rounded or squared in shape. The narrow pointed toe design appeared in the early 1940s. A newer design, the "roper" style, has a short boot shaft that stops above the ankle but before the middle of the calf, with a very low and squared-off "roper" heel, shaped to the sole of the boot, usually less than one inch high. Roper boots are usually made with rounded toes, but, correlating with style changes in streetwear, styles with a squared toe are seen. The roper style is also manufactured in a lace-up design which often fits better around the ankle and is less likely to slip off, but lacing also creates safety issues for riding. They usually have some sort of decorative stitching. 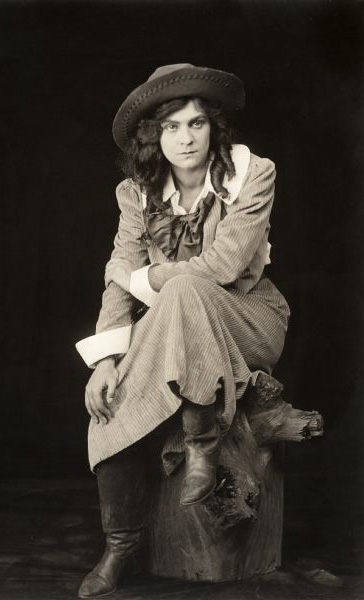 Riding boots had been a part of equestrian life for centuries. Until the industrial age, boots were individually handmade in many different styles, depending on culture. Early cowboy boot designs, along with other cowboy accouterments, were also heavily influenced by the vaquero tradition that developed from a tradition that originated in Spain to the Americas, dating back to the early 16th century. Military boots designed for cavalry riders also had an influence. Mexican vaqueros probably developed a cowboy boot from the Spanish riding boots. The Mexican cowboy boots only came in three styles, rounded toe, pointed toe and tribal toes, while the Americans offer much more styles. Also the idea of using skins on the boots came from Northern Mexico, as well as the colors, the colors imitate the color of Mexican ranches. Later, the Industrial Revolution allowed some styles of boots to be mass-produced. One mass-produced boot style, the Wellington boot, (a shorter but cavalry-oriented boot) was popular with cowboys in the US until the 1860s. During the cattle drive era of 1866–1884, the cowboy was not apt to ruin a good pair of dress boots while working, so some owned more decorative dress boots to wear in town. The basic style elements permeated even working boots, and made the Wellington obsolete. Fashion magazines from 1850 and 1860 show the cowboy boot with top stitching, cutouts of geometric or other natural elements and underslung heel. The American-style boot was taken up by bootmakers in the cattle ranching areas of Texas, Oklahoma, and Kansas. Two of the best known early bootmakers of the era were Charles Hyer of Hyer Brothers Boots in Olathe, Kansas, and H. J. "Daddy Joe" Justin of Justin Boots in Spanish Fort, Texas and later Nocona, Texas. After Justin moved to Fort Worth where shipping was easier, the Nocona brand of cowboy boots was made by Enid Justin Stelzer, eldest daughter of H. J. Justin, who stayed in Nocona with her husband, and the couple continued the family business. After the couple divorced, the Olsen-Stelzer brand was started by Stelzer. T.C. McInerney of Abilene, Kansas, also made the American-style cowboy boot. A picture of this boot is listed in an ad in the Abilene Weekly Chronicle on December 7, 1871.

When mounting and, especially, dismounting, the slick, treadless leather sole of the boot allowed easy insertion and removal of the foot into the stirrup of the Western saddle. The original toe was rounded and slightly narrowed at the toe to make it easier to insert. While an extremely pointed toe is a modern stylization appearing in the 1940s, it adds no practical benefit, and can be uncomfortable in a working boot. While in the saddle, the tall heel minimized the risk of the foot sliding forward through the stirrup, which could be life-threatening if it happened and the rider were to be unseated. There was often considerable risk that a cowboy would fall from a horse: he often had to ride young, unpredictable horses, and he had to do challenging ranch work in difficult terrain, which often meant that he could accidentally become unseated by a quick-moving horse. If a rider fell from a horse but had a boot get caught in the stirrup, there arose a very great risk that the horse could panic and run off, dragging the cowboy, thus causing severe injury and possible death. The tall leather shaft of the boot helped to hold the boot in place in the absence of lacing. The tall shaft, comfortably loose fit, and lack of lacing all were additional features that helped prevent a cowboy from being dragged since his body weight could pull his foot out of the boot if he fell off while the boot remained stuck in the stirrup. While mounted, the shaft also protected the lower leg and ankle from rubbing on the stirrup leathers, as well as fending off brush and thorns, particularly if also worn with chaps or chinks. While dismounted, the shaft helped protect the leg and foot from rocks, brush, thorns, and rattlesnakes. In wet weather or creek crossings, the high tops helped prevent the boot from filling with mud and water. The modern roper style boot with a low heel and shorter shaft emerged from the traditional design in response to the needs of modern rodeo, particularly calf roping, where the cowboy had to run to tie the calf as well as to ride. The lower shaft resulted in a less expensive boot, but also allowed the boot to be more easily removed. A lace-up design for roper boots became popular as it prevented the boot from falling off too easily and provided more ankle support when on foot, though the lacer also has safety issues because it will not fall off if a rider is hung up in a stirrup, and, lacking a smooth upper, the lacings themselves may make it easier for the boot to become caught in the stirrup in the first place. Decoration varied widely. Early boots were cowhide leather pieced together with single rows of top stitching, but as custom boots were made, cowboys asked for decorative stitching, cutouts in the high tops (early on, often Texas stars), and different materials. The interaction of wild west shows and, later, western movies influenced styles that working cowboys at times adopted. Modern cowboy boots are available in all colors and can be made from just about every animal whose skin can be made into leather, including exotic materials such as alligator and ostrich. Women's boots have become a major part of the more recent history of the cowboy boot. Toe styles have varied through the years, but the basics remain the same. Popular toe styles include snip, wide snip, square, and round. One accessory used with cowboy boots are spurs, which are sometimes attached to the heel of each boot for the purpose of cueing a horse while riding.

Many cowboy boot companies have been in operation since the 19th century. Each manufacturer has developed its own proprietary lasts for producing boots, which are considered trade secrets and are highly guarded. Because of this, fitting between companies is not always consistent. Each brand will fit a little differently from their competition. When considering wearing a cowboy boot from a different manufacturer, it is recommended to seek assistance from a knowledgeable merchant who specializes in cowboy boots if a person cannot try them on in person. Some wearers will swear by one manufacturer's fit, while others will not perceive any difference between brands. For some individuals, the fit may vary depending on the type of toe that is sought. In a properly fitting boot, regardless of the shape of the toes, the wearer should be able to wiggle their toes, feeling no pressure from the sides, top, or front of the boot. If the individual's foot has a longer than normal arch, or if their foot is more V shaped, then a narrow toe may present a problem. A rounder toe, or a squared off toe, will fit more like a regular shoe. Another factor is the choice of leather. A boot made of a softer leather, such as calfskin, buffalo, or horsehide, will quickly stretch where appropriate and mold to the wearer's foot. That is why it is recommended to select a snug size because the boot will eventually "break in" and a loose fitting boot at the time of purchase will become sloppy. However, some individuals also are unaccustomed to the slight slippage of the heel in a new, non-laced cowboy boot, particularly with a cowboy heel, and buy a too-small boot in an attempt to stop this slippage. But a small amount of slippage is also normal at first. This slippage is caused by the stiffness of a new boot's sole. As the sole breaks in and forms around one's foot, the sole becomes more flexible and the slippage will decrease. Boot hooks are often required to put on a new pair of boots until they soften in the arch and break in. A boot jack is recommended for removal, though care must be taken not to damage the heel of the boot when using a jack.