Computing is any goal-oriented activity requiring, benefiting from, or creating computing machinery. It includes the study and experimentation of algorithmic processes and development of both hardware and software. It has scientific, engineering, mathematical, technological and social aspects. Major computing disciplines include computer engineering, computer science, cybersecurity, data science, information systems, information technology and software engineering. 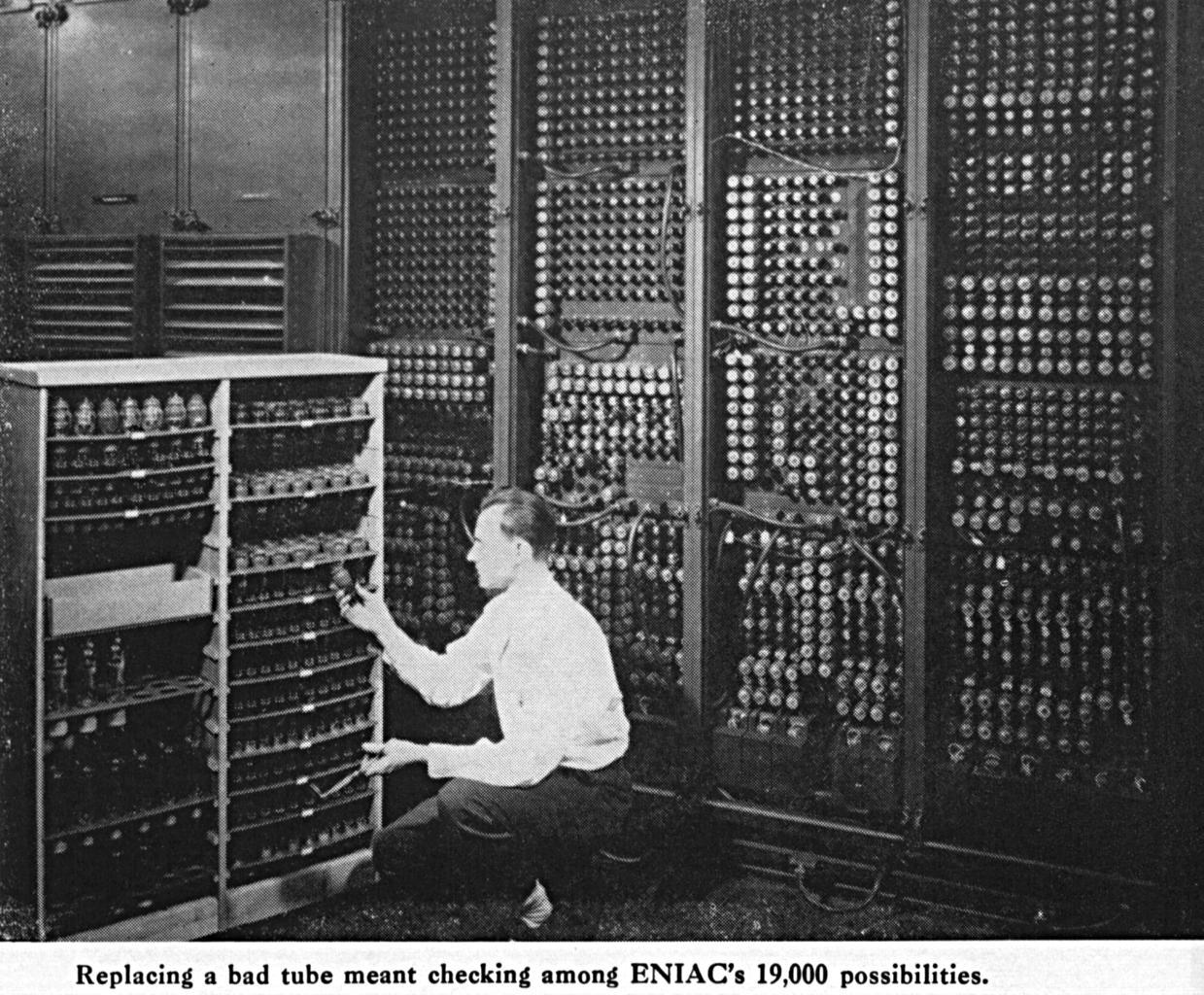 Application software, also known as an "application" or an "app", is computer software designed to help the user to perform specific tasks. Examples include enterprise software, accounting software, office suites, graphics software and media players. Many application programs deal principally with documents. Apps may be bundled with the computer and its system software, or may be published separately. Some users are satisfied with the bundled apps and need never install additional applications. Application software is contrasted with system software and middleware, which manage and integrate a computer's capabilities, but typically do not directly apply them in the performance of tasks that benefit the user. The system software serves the application, which in turn serves the user. Application software applies the power of a particular computing platform or system software to a particular purpose. Some apps such as Microsoft Office are available in versions for several different platforms; others have narrower requirements and are thus called, for example, a Geography application for Windows or an Android application for education or Linux gaming. Sometimes a new and popular application arises that only runs on one platform, increasing the desirability of that platform. This is called a killer application.

A computer network, often simply referred to as a network, is a collection of hardware components and computers interconnected by communication channels that allow sharing of resources and information. Where at least one process in one device is able to send/receive data to/from at least one process residing in a remote device, then the two devices are said to be in a network. Networks may be classified according to a wide variety of characteristics such as the medium used to transport the data, communications protocol used, scale, topology, and organizational scope. Communications protocols define the rules and data formats for exchanging information in a computer network, and provide the basis for network programming. Well-known communications protocols include Ethernet, a hardware and Link Layer standard that is ubiquitous in local area networks, and the Internet Protocol Suite, which defines a set of protocols for internetworking, i.e. for data communication between multiple networks, as well as host-to-host data transfer, and application-specific data transmission formats. Computer networking is sometimes considered a sub-discipline of electrical engineering, telecommunications, computer science, information technology or computer engineering, since it relies upon the theoretical and practical application of these disciplines.

The Internet is a global system of interconnected computer networks that use the standard Internet protocol suite (TCP/IP) to serve billions of users that consists of millions of private, public, academic, business, and government networks, of local to global scope, that are linked by a broad array of electronic, wireless and optical networking technologies. The Internet carries an extensive range of information resources and services, such as the inter-linked hypertext documents of the World Wide Web and the infrastructure to support email.

Computer programming in general is the process of writing, testing, debugging, and maintaining the source code and documentation of computer programs. This source code is written in a programming language, which is an artificial language often more restrictive or demanding than natural languages, but easily translated by the computer. The purpose of programming is to invoke the desired behavior (customization) from the machine. The process of writing high quality source code requires knowledge of both the application's domain ''and'' the computer science domain. The highest-quality software is thus developed by a team of various domain experts, each person a specialist in some area of development. But the term ''programmer'' may apply to a range of program quality, from hacker to open source contributor to professional. And a single programmer could do most or all of the computer programming needed to generate the proof of concept to launch a new "killer" application.

A programmer, computer programmer, or coder is a person who writes computer software. The term ''computer programmer'' can refer to a specialist in one area of computer programming or to a generalist who writes code for many kinds of software. One who practices or professes a formal approach to programming may also be known as a programmer analyst. A programmer's primary computer language (C, C++, Java, Lisp, Python, etc.) is often prefixed to the above titles, and those who work in a web environment often prefix their titles with ''web''. The term ''programmer'' can be used to refer to a software developer, software engineer, computer scientist, or software analyst. However, members of these professions typically possess other software engineering skills, beyond programming.

The computer industry is made up of all of the businesses involved in developing computer software, designing computer hardware and computer networking infrastructures, the manufacture of computer components and the provision of information technology services including system administration and maintenance.

The software industry includes businesses engaged in development, maintenance and publication of software. The industry also includes software services, such as training, documentation, and consulting.

Software engineering (SE) is the application of a systematic, disciplined, quantifiable approach to the design, development, operation, and maintenance of software, and the study of these approaches; that is, the application of engineering to software. In layman's terms, it is the act of using insights to conceive, model and scale a solution to a problem. The first reference to the term is the 1968 NATO Software Engineering Conference and was meant to provoke thought regarding the perceived "software crisis" at the time. ''Software development'', a much used and more generic term, does not necessarily subsume the engineering paradigm. The generally accepted concepts of Software Engineering as an engineering discipline have been specified in the Guide to the Software Engineering Body of Knowledge (SWEBOK). The SWEBOK has become an internationally accepted standard ISO/IEC TR 19759:2015.

Computer science or computing science (abbreviated CS or Comp Sci) is the scientific and practical approach to computation and its applications. A computer scientist specializes in the theory of computation and the design of computational systems. Its subfields can be divided into practical techniques for its implementation and application in computer systems and purely theoretical areas. Some, such as computational complexity theory, which studies fundamental properties of computational problems, are highly abstract, while others, such as computer graphics, emphasize real-world applications. Still others focus on the challenges in implementing computations. For example, programming language theory studies approaches to description of computations, while the study of computer programming itself investigates various aspects of the use of programming languages and complex systems, and human–computer interaction focuses on the challenges in making computers and computations useful, usable, and universally accessible to humans.

"Information systems (IS)" is the study of complementary networks of hardware and software (see information technology) that people and organizations use to collect, filter, process, create, and distribute data. The ACM's ''Computing Careers'' website says The study bridges business and computer science using the theoretical foundations of information and computation to study various business models and related algorithmic processes within a computer science discipline. The field of Computer Information System(s) (CIS) studies computers and algorithmic processes, including their principles, their software and hardware designs, their applications, and their impact on society while IS emphasizes functionality over design.

Information technology (IT) is the application of computers and telecommunications equipment to store, retrieve, transmit and manipulate data, often in the context of a business or other enterprise. The term is commonly used as a synonym for computers and computer networks, but it also encompasses other information distribution technologies such as television and telephones. Several industries are associated with information technology, such as computer hardware, software, electronics, semiconductors, internet, telecom equipment, e-commerce and computer services.

DNA-based computing and quantum computing are areas of active research in both hardware and software (such as the development of quantum algorithms). Potential infrastructure for future technologies includes DNA origami on photolithography and quantum antennae for transferring information between ion traps. By 2011, researchers had entangled 14 qubits. Fast digital circuits (including those based on Josephson junctions and rapid single flux quantum technology) are becoming more nearly realizable with the discovery of nanoscale superconductors. Fiber-optic and photonic (optical) devices, which already have been used to transport data over long distances, have started being used by data centers, side by side with CPU and semiconductor memory components. This allows the separation of RAM from CPU by optical interconnects. IBM has created an integrated circuit with both electronic and optical information processing in one chip. This is denoted "CMOS-integrated nanophotonics" or (CINP). One benefit of optical interconnects is that motherboards which formerly required a certain kind of system on a chip (SoC) can now move formerly dedicated memory and network controllers off the motherboards, spreading the controllers out onto the rack. This allows standardization of backplane interconnects and motherboards for multiple types of SoCs, which allows more timely upgrades of CPUs. Another field of research is spintronics. Spintronics can provide computing power and storage, without heat buildup. Some research is being done on hybrid chips, which combine photonics and spintronics. There is also research ongoing on combining plasmonics, photonics, and electronics.

Cloud computing is a model that allows for the use of computing resources, such as servers or applications, without the need for much interaction between the owner of these resources and the user using them. It is typically offered as a service, making it another example of Software as a Service, Platforms as a Service, and Infrastructure as a Service depending on the functionality offered. Key characteristics include on-demand access, broad network access, and the capability of rapid scaling. It allows individual users or small business to benefit from economies of scale. One area of interest in this field is its potential to support energy efficiency. Allowing thousands of instances of computation to occur on one single machine instead of thousands of individual machines could help save energy. It could also ease the transition to more renewable energy, since it would suffice to power one server farm with a set of solar panels or wind turbines rather than millions of peoples' homes. With centralized computing, the field poses several challenges, especially in security and privacy. Current legislation does not sufficiently protect users from companies mishandling their data on the company servers. This suggests potential for further legislative regulations on cloud computing and tech companies.

Quantum computing is an area of research that brings together the disciplines of computer science, information theory, and quantum physics. The idea of information being a basic part of physics is relatively new, but there seems to be a strong tie between information theory and quantum mechanics. Whereas traditional computing operates on a binary system of ones and zeros, quantum computing uses qubits. Qubits are capable of being in a superposition, which means that they are in both states, one and zero, simultaneously. This means the qubit is not somewhere between 1 and 0, but actually the value of the qubit will change depending on when you measure it. This trait of qubits is called quantum entanglement and is the core idea of quantum computing and is what allows quantum computers to do the large scale equations they are used for. Quantum computing is often used for scientific research where a normal computer does not have nearly enough computational power to do the calculations necessary. A good example would be molecular modeling. Large molecules are far too complex for modern computers to calculate what happens to them during a reaction, but the power of quantum computers could open the doors to further understanding these molecules.