Chemnitz (, from 1953 to 1990: ''Karl-Marx-Stadt'', ; Czech: ''Saská Kamenice'') is the third largest city in the German federal state of Saxony after Leipzig and Dresden. It is the 28th largest city of Germany as well as the fourth largest city in the area of former East Germany after (East) Berlin, Leipzig and Dresden. The city is part of the Central German Metropolitan Region, and lies in the middle of a string of cities sitting in the densely populated northern foreland of the Elster and Ore Mountains, stretching from Plauen in the southwest via Zwickau, Chemnitz and Freiberg to Dresden in the northeast. Located in the Ore Mountain Basin, the city is surrounded by the Ore Mountains to the south and the Central Saxon Hill Country to the north. The city stands on the Chemnitz River (progression: ), which is formed through the confluence of the rivers Zwönitz and Würschnitz in the borough of Altchemnitz. The name of the city as well as the names of the rivers are of Slavic origin. Chemnitz is the third largest city in the Thuringian-Upper Saxon dialect area after Leipzig and Dresden. The city's economy is based on the service sector and manufacturing industry. Chemnitz University of Technology has around 10,000 students. Chemnitz is going to be the European Capital of Culture in 2025.

Chemnitz is named after the river Chemnitz, a small tributary of the Zwickau Mulde. The word "Chemnitz" is from the Sorbian language ( hsb|Kamjenica), and means "stony rook. The word is composed of the Slavic word meaning "stone" and the feminine suffix . It is known in Czech as and in Polish as . There are many other towns named Kamienica or Kamenice in areas with past or present Slavic settlement.

An early Slavic tribe's settlement was located at , and the first documented use of the name Chemnitz was the 1143 site of a Benedictine monastery around which a settlement grew. Circa 1170 Frederick I, Holy Roman Emperor granted it the rights of an Imperial city. In 1307, the town became subordinate to the Margraviate of Meissen, the predecessor of the Saxon state. In medieval times, Chemnitz became a centre of textile production and trade. More than one third of the population worked in textile production. Geologist Georgius Agricola (1494-1555), author of several significant works on mining and metallurgy including the landmark treatise ''De Re Metallica'', became city physician of Chemnitz in 1533 and lived here until his death in 1555. In 1546 he was elected a Burgher of Chemnitz and in the same year also was appointed Burgomaster (lord mayor), serving again in 1547, 1551, and 1553. In spite of having been a leading citizen of the city, when Agricola died in 1555 the Protestant Duke denied him burial in the city's cathedral due to Agricola's allegiance to his Roman Catholic faith. Agricola's friends arranged for his remains to be buried in more sympathetic Zeitz, approximately 50 km away. By the early 19th century, Chemnitz had become an industrial centre (sometimes called "the Saxon Manchester", german: Sächsisches Manchester, ). In 1913, Chemnitz had a population of 320,000 and, like Leipzig and Dresden, was larger at that time than today. After losing inhabitants due to the First World War Chemnitz grew rapidly again and reached its all-time peak of 360,250 inhabitants in 1930. Thereafter, growth was stalled by the world economic crisis.

Allied bombing destroyed 41 per cent of the built-up area of Chemnitz during the Second World War. Chemnitz contained factories that produced military hardware and a Flossenbürg forced labor subcamp (500 female inmates) for Astra-Werke AG. The oil refinery was a target for bombers during the Oil Campaign of World War II, and Operation Thunderclap attacks included the following raids: * 14/15 February 1945: The first major raid on Chemnitz used 717 RAF bombers, but due to cloud cover most bombs fell over open countryside. * 2/3–5 March: USAAF bombers attacked the marshalling yards. * 5 March: 760 RAF bombers attacked. The headquarters of the auto manufacturer Auto Union were also based in Chemnitz since 1932 and its buildings were also badly damaged. At the end of the war, the company's executives fled and relocated the company in Ingolstadt, Bavaria, where it evolved into Audi, now a brand within the Volkswagen group. The World War II bombings left most of the city in ruins and post-war, the East German reconstruction included large low rise (and later high-rise ) housing. Some tourist sites were reconstructed during the East German era and after German reunification. The city was occupied by Soviet troops on 8 May 1945.

After the dissolution of the Länder (states) in the GDR in 1952, Chemnitz became seat of a district (). On 10 May 1953, the city was renamed by decision of the East German government to after Karl Marx, in recognition of its industrial heritage and the Karl Marx Year marking the 135th anniversary of his birth and the 70th anniversary of his death. GDR Prime Minister Otto Grotewohl said: After the city centre was destroyed in World War II, the East German authorities attempted to rebuild it to symbolise the conceptions of urban development of a socialist city. The layout of the city centre at that time was rejected in favour of a new road network. However, the original plans were not completed. In addition, the rapid development of housing took priority over the preservation of old buildings. So in the 1960s and 1970s, both in the centre as well as the periphery, large areas were built in apartment-block style, for example . The old buildings of the period, which still existed in the Kassberg, and especially, were neglected and fell increasingly into dereliction. 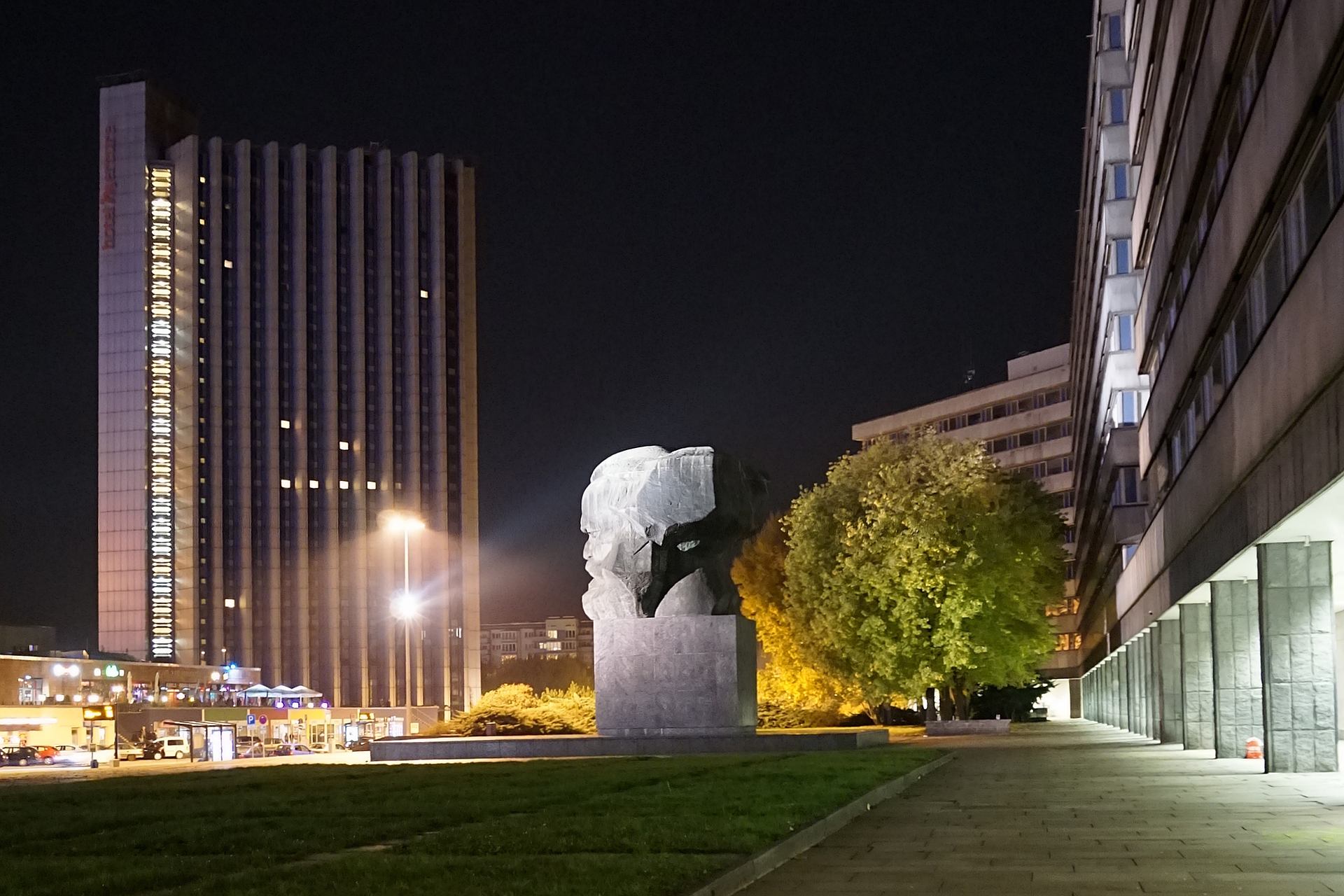 On 23 April 1990, a referendum on the future name of the city was held: 76% of the voters voted for the old name "". On 1 June 1990, the city was officially renamed. After the reunification of Germany on 3 October 1990, the city of Chemnitz faced several difficult tasks. Many inhabitants migrated to the former West Germany and unemployment in the region increased sharply; in addition Chemnitz did not have adequate shopping facilities, but this was increasingly demanded.