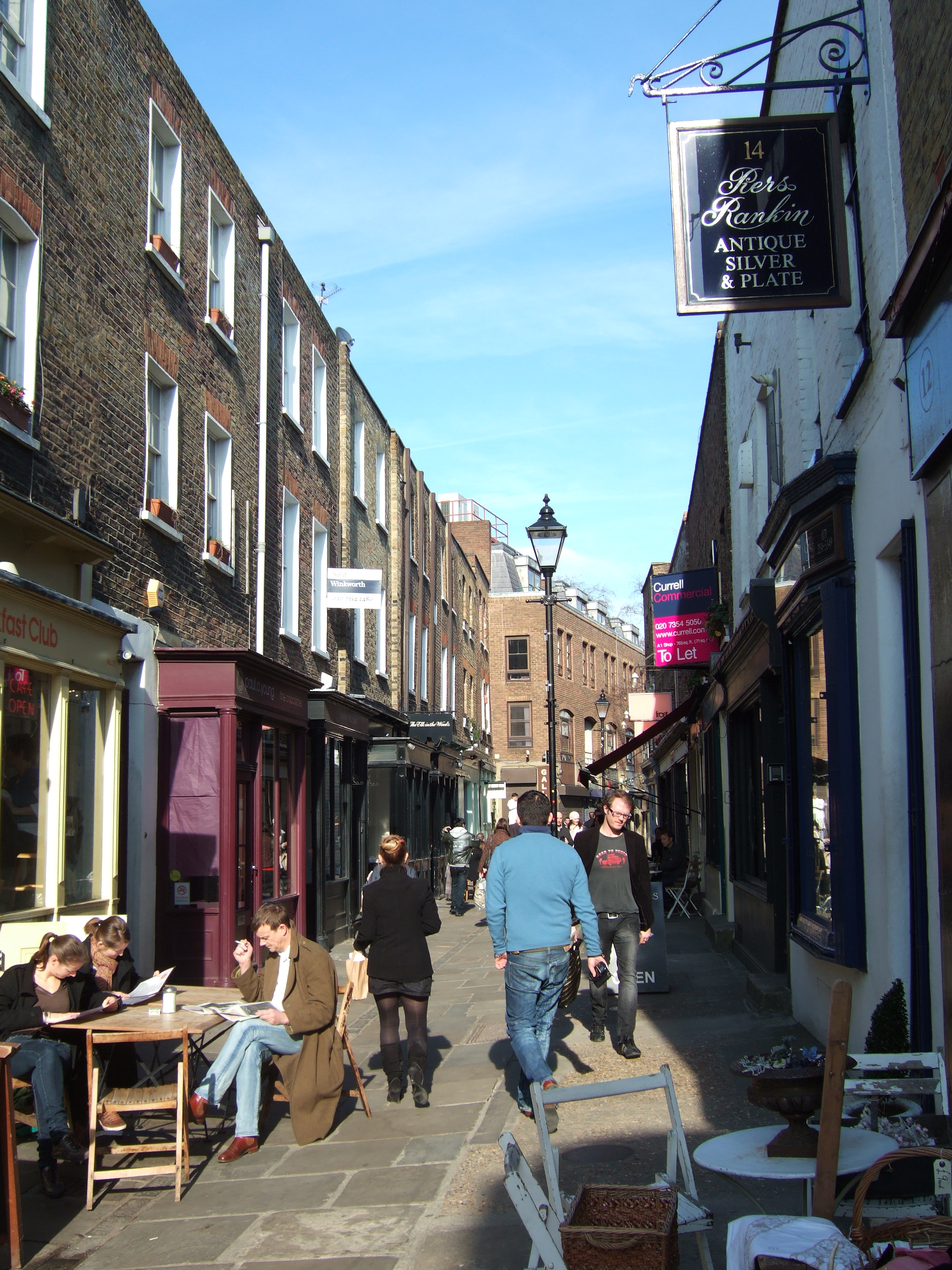 Camden Passage is a picturesque car-free London street minutes from the
Angel tube station Angel is a London Underground station in the Angel area of the London Borough of Islington. It is on the Bank branch of the Northern line, between Old Street and King's Cross St. Pancras stations, in Travelcard Zone 1. The station was originally ...
off
Upper Street Upper Street is the main street of the Islington district of inner north London, and carries the A1 road. It begins at the junction of the A1 and Pentonville Road and City Road, and runs roughly northwards past Angel Underground station, then pas ...
in the
London Borough of Islington The London Borough of Islington ( ) is a London borough in Inner London. The borough includes a significant area to the south which forms part of central London. Islington has an estimated population of 215,667. It was formed in 1965 under the Lon ...
. The passage is known for its
antique shop . An antique shop (or antiques shop) is a retail store specializing in the selling of antiques. Antiques shops can be located either locally or, with the advent of the Internet, found online. An antiques shop can also be located within an antique ...
s, markets and its array of independent shops, cafes and restaurants. It hosts an antique market every Wednesday, Saturday, and Sunday (on the Corner of Camden Passage and Charlton Place, and at the Pierrepont Arcade Market space), a book market on Thursday and Friday (at the Pierrepont Arcade Market space) and a market with an eclectic mix of vintage & retro clothes, pictures, vintage luggage, interesting one off items, collectables and bric-a-brac on Wednesday, Friday, Saturday and Sunday (along the Passage near the Camden Head pub).

The independent shops, cafes and restaurants are typically open seven days a week, and the
Angel ComedyAngel Comedy is a free comedy night that runs seven nights a week at two pub venues in London, England; above the Camden Head and in The Bill Murray. The club was founded by Barry Ferns, Sarah Pearce, Rachael Warnes and Dec Munro, and describes itsel ...
club runs nightly at the Camden Head public house.

The passage was built, as an alley, along the backs of houses on Upper Street, then Islington High Street, in 1767. The antiques market was founded in the 1960s, in conjunction with the Metropolitan Borough of Islington by John Payton. The venture was initially successful, attracting over 350 traders, but recently the centre of Islington has undergone regeneration, leading to higher rents being asked at the renewal of leases. Following some years of lying derelict, a former tram shed was reopened on 14 November 1979 as The Mall Antiques Arcade, and at its height housed over 35 dealers on its ground and lower ground floors. The building also housed other businesses, such as a restaurant in its upper floors, but the mall closed in 2008. In 2013 it became a Jack Wills shop, and as of 2014 was a Superdry store. In 2016 it became a sofa.com store. The closure of the arcade reflects the reduction in the number of antique traders in the nearby Camden Passage. The building is a listed building, Grade II listed building. Its severe windowless brick aspect is dictated by its original use, English Heritage describe its architecture as influenced by, and a tribute to, Newgate Prison (by George Dance the Younger), which had been demolished in 1902, three years before this building's construction by the London County Council, LCC.