Axel Springer SE is a German digital publishing house which is the largest in Europe, with numerous multimedia news brands, such as ''Bild'', ''Die Welt'', and ''Fakt'' and more than 15,000 employees. It generated total revenues of about €3.3 billion and an EBITDA of €559 million in the financial year 2015. The digital media activities contribute more than 60% to its revenues and nearly 70% to its EBITDA. Axel Springer’s business is divided into three segments: paid models, marketing models, and classified ad models. Since 2020, it is majority-owned by the US private equity firm KKR. Headquartered in Berlin, Germany, the company is active in more than 40 countries with subsidiaries, joint ventures, and licensing.

It was started in 1946/1947 by journalist Axel Springer. Its current CEO is Mathias Döpfner. The Axel Springer company is the largest publishing house in Europe and controls the largest share of the German market for daily newspapers; 23.6%, largely because its flagship tabloid ''Bild'' is the highest-circulation newspaper in Europe with a daily readership exceeding 12 million.

*1946: Publisher Hinrich Springer (66) and his son Axel Springer (34) establish the limited company Axel Springer Verlag GmbH. Launch of the ''Nordwestdeutsche Hefte'' and the radio and TV magazine Hörzu. *1948: Launch of the evening newspaper ''Hamburger Abendblatt'', the first daily created by Axel Springer. *1952: Launch of the popular daily ''Bild''. The paper was based on the British tabloid ''Daily Mirror'', and peaked at circulation of 5 million in the 1980s. *1953: Axel Springer Verlag buys the publishing house Die Welt, including the daily paper ''Die Welt'' and the Sunday paper ''Welt am Sonntag''. *1956: Company headquarters in Hamburg is built. *1959: The company acquires the majority holding in Ullstein AG, including the Berlin newspapers ''Berliner Morgenpost'' and ''B.Z.'' and the Ullstein book-publishing business. 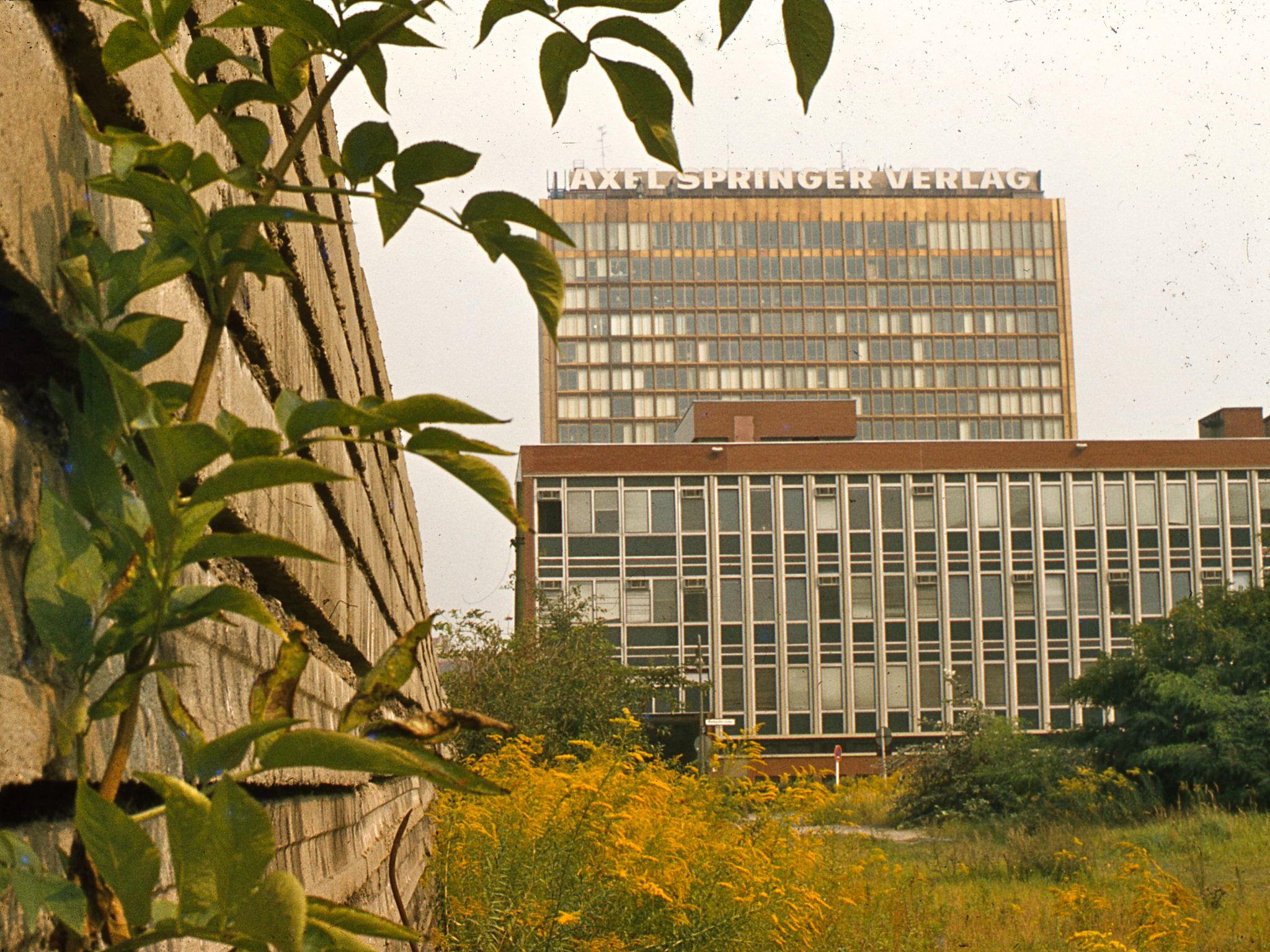 *1966: Official opening of the Berlin headquarters. Hamburg remains important site. *1968: After the attack on the students' leader Rudi Dutschke on 11 April 1968 the APO (Extra-Parliamentary Opposition) starts acts of violence against the company. The APO had a history of animosity with the Springer Group's allegedly biased coverage of the student movement. For instance, in the wake of the shooting of Benno Ohnesorg by the police at a student demonstration against the Shah, one Springer paper reported that "what happened yesterday in Berlin had nothing to do with politics… It was criminal in the most sickening way". In fact, Ohnesorg, who had never attended a demonstration before, had been shot in the back while trying to leave the demonstration. *1972–73: Building of the offset-printing plant in Essen-Kettwig. *1984: Official opening of the offset printing facility in Ahrensburg near Hamburg. *1985: 49% of the company is offered for public subscription. Later that year Axel Springer dies. Control is passed to his widow Friede Springer. *1986: The first licensed edition of ''Auto Bild'' comes out in Italy. Other licensed editions and joint venture publications later appear in twenty European countries, Indonesia and Thailand. *1993: Official opening of the offset printing works in Berlin-Spandau. *2001: Axel Springer and T-Online establish a joint subsidiary Bild.de/T-Online AG. *2002: Launch of immonet.de. Mathias Doepfner, former editor-in-chief of Die Welt, becomes CEO of Axel Springer AG. *2003: Name is changed to Axel Springer AG. *2009: Axel Springer AG acquires affiliate marketers Zanox and Digital Window as well as StepStone ASA. *2010 a $635.7 million offer by Axel for leading French real estate website operator seloger.com caused seloger shares to rise as much as 32% the most since it went public. Within 3 days Axel increased its offer 15.6% to $735 million after seloger shareholders rejected the deal. *2012 Axel Springer forms a joint venture (Axel Springer Digital Classified) with global growth equity firm General Atlantic. The company buys TotalJobs in the UK from Reed Elsevier. *2013: Springer sells its regional newspapers, woman's magazines, and television magazines to Funke Mediengruppe for €920 million *2013: Publications Grand Public, a French magazine publisher owned by Springer, is sold to Reworld Media. *2015: Axel Springer AG purchases Business Insider, a business, celebrity and technology news website, in a deal that values Business Insider at $442 million. *2015: On 8 December, Axel Springer increased their share in Axel Springer Digital Classifieds GmbH from 70 per cent to 85 per cent, and was granted a purchase option to acquire the remaining 15 per cent from General Atlantic. On 9 December, Axel Springer exercised the option, acquiring the additional 15% from General Atlantic in exchange for shares of Axel Springer, leaving the growth equity firm with 8.3% holding in the company. *2020: Friede Springer transferred $1.5 billion of Axel Springer shares to CEO Mathias Doepfner, effectively making him heir of the media group. Doepfner now has control of 44% of the voting rights.


Editorial bias and alleged ties to US intelligence agencies

According to German scholar Gudrun Kruip of the Stiftung Bundespräsident-Theodor-Heuss-Haus, Axel Springer SE and its subsidiaries spread a strongly pro-American view in which criticism of US foreign policy is largely absent. As of 2021, the Axel Springer SE names "solidarity with the free values of the United States of America." as one of its core principles on its website. Many scholars and independent observers allege a "subservience to American geopolitical interests" of the publishing house and its subsidiaries to this day.


Accusations of editorial interference in Poland

In 2017, Ringer Axel Springer Polska was accused of editorial interference, when the head of the joint venture Mark Dekan wrote a letter to the company's Polish employees in which he disparaged the head of the conservative Law and Justice political party, calling the Polish politician Jaroslaw Kaczynski a "loser" for opposing the candidacy of Donald Tusk as President of the European Union, stating that "...we should never forget about the basic values that we represent... Here is the moment where free media, such as ours must be active. We speak for the ideas of... a United Europe." In the letter, Dekan also raised his concerns that European integration was least supported by the youngest generation of Poles and vowed to take appropriate action, suggesting "Let's tell them what to do to stay in the fast lane and not end in the parking lot."

In the 1960s and 1970s the company was targeted by a number of left-wing groups. It was denounced by German-American writer Reinhard Lettau in an incendiary speech at the Freie Universität Berlin; in 1968 their Berlin headquarters was blockaded by students; in 1972 the Red Army Faction claimed responsibility for six bombs placed in the Hamburg building (only three exploded and 17 people were injured) and in 1975 a bomb exploded in their Paris office, the "6th of March Group" (connected to the Red Army Faction) claimed responsibility.