An arenavirus is a bisegmented ambisense RNA virus that is a member of the family ''Arenaviridae''. These viruses infect rodents and occasionally humans. A class of novel, highly divergent arenaviruses, properly known as reptarenaviruses, have also been discovered which infect snakes to produce inclusion body disease. At least eight arenaviruses are known to cause human disease. The diseases derived from arenaviruses range in severity. Aseptic meningitis, a severe human disease that causes inflammation covering the brain and spinal cord, can arise from the lymphocytic choriomeningitis virus. Hemorrhagic fever syndromes, including Lassa fever, are derived from infections such as Guanarito virus, Junin virus, Lassa virus, Lujo virus, Machupo virus, Sabia virus, or Whitewater Arroyo virus. Because of the epidemiological association with rodents, some arenaviruses and bunyaviruses are designated as roboviruses.

Viewed in cross-section, arenaviruses contain grainy particles that are ribosomes acquired from their host cells. It is from this characteristic that they acquired the name ''arena'', from the Latin root meaning ''sand''. The ribosomal structures are not believed to be essential for virus replication. Virus particles, or virions, are pleomorphic (variable in shape) but are often spherical, with a diameter of 60–300 nm, and are covered with surface glycoprotein spikes. The virus contains a beaded nucleocapsid with two single-stranded RNA segments. The nucleocapsid consists of a core of nucleic acid enclosed in a protein coat. Although they are categorized as negative-sense viruses, arenaviruses are ambisense. While sections of their genome encode genes in the negative sense (reverse polarity), other sections encode genes in the opposite (forward/positive sense) direction. This complex gene expression structure is theorized to be a primitive regulatory system, allowing the virus to control what proteins are synthesized at what point in the life cycle. The life cycle of the arenavirus is restricted to the cell cytoplasm. 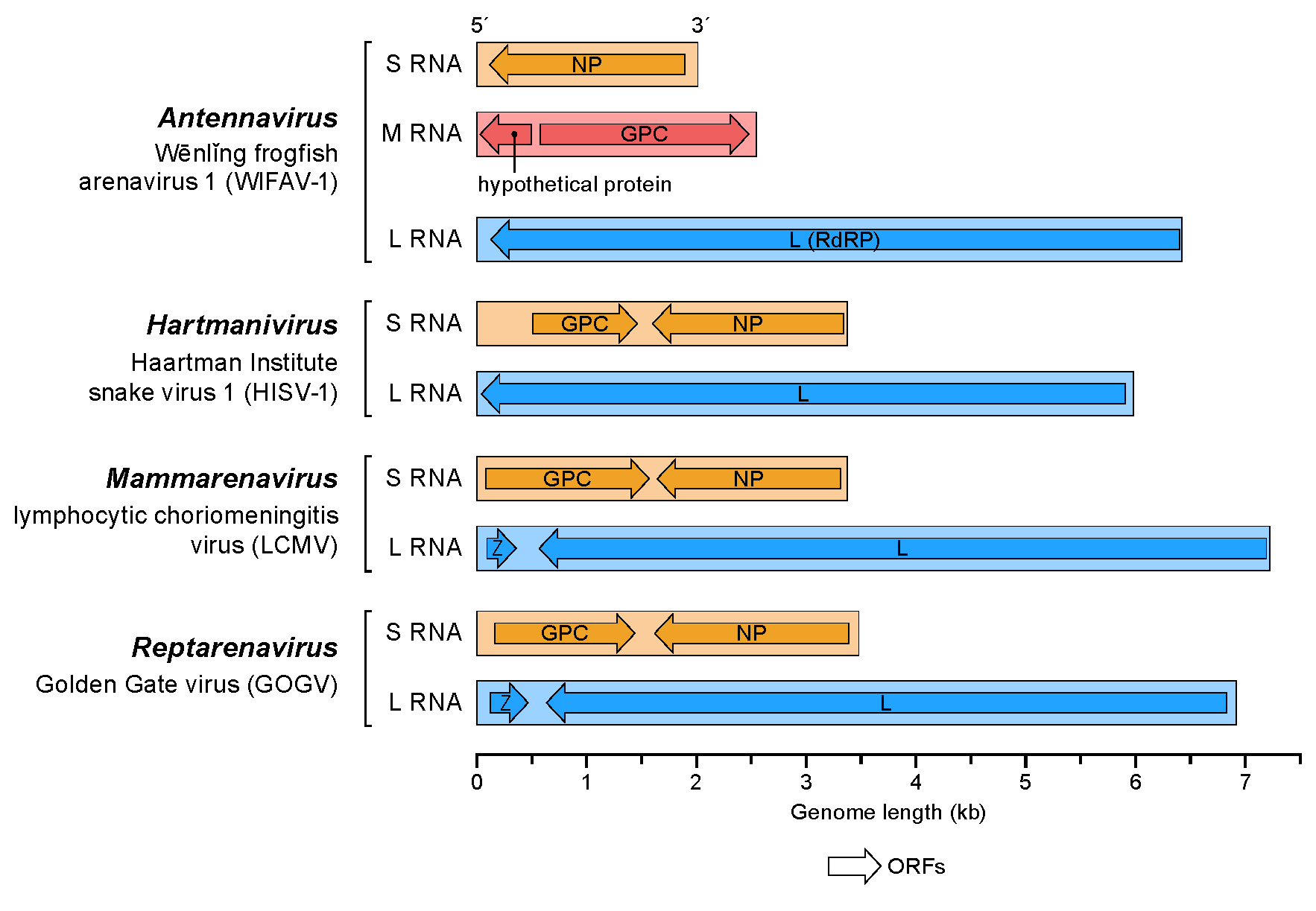 Arenaviruses have a segmented RNA genome that consists of two single-stranded ambisense RNAs. As with all negative-sense RNA viruses, the genomic RNA alone is not infectious and the viral replication machinery is required to initiate infection within a host cell. Genomic sense RNA packaged into the arenavirus virion is designated negative-sense RNA, and must first be copied into a positive-sense mRNA in order to produce viral protein. The two RNA segments are denoted Small (S) and Large (L), and code for four viral proteins in a unique ambisense coding strategy. Each RNA segment codes for two viral proteins in opposite orientation such that the negative-sense RNA genome serves as the template for transcription of a single mRNA and the positive-sense copy of the RNA genome templates a second mRNA. The separate coding sequences of the two viral proteins are divided by an intergenic region RNA sequence that is predicted to fold into a stable hairpin structure. The extreme termini of each RNA segment contains a 19 nucleotide highly conserved sequence that is critical for recruitment of the viral replication machinery and initiation of viral mRNA transcription and genomic replication. The conserved 5' and 3' RNA termini sequences are complementary and allows each RNA segment to adopt a double-stranded RNA panhandle structure that maintains the termini in close proximity and results in a circular appearance to purified arenavirus genomic templates visualized by electron microscopy. The double-stranded RNA panhandle structure is critical for efficient viral RNA synthesis, but potential interterminal double-stranded RNA interactions must be transiently relieved in order to recruit the viral polymerase. The S-segment RNA is approximately 3.5 kb, and encodes the viral nucleocapsid protein (NP) and glycoprotein (GPC). The L-segment RNA is approximately 7.2 kb, and encodes the viral RNA-dependent RNA-polymerase (L) and a small RING-domain containing protein (Z). The Z protein forms homo oligomers and a structural component of the virions. The formation of these oligomers is an essential step for particle assembly and budding. Binding between Z and the viral envelope glycoprotein complex is required for virion infectivity. Z also interacts with the L and NP proteins. Polymerase activity appears to be modulated by the association between the L and Z proteins. Interaction between the Z and NP proteins is critical for genome packaging.

The glycoprotein (GP) is synthesised as a precursor molecule. It is cleaved into three parts - GP1, GP2 and a stable signal peptide (SSP). These reactions are catalysed by cellular signal peptidases and the cellular enzyme Subtilisin Kexin Isozyme-1 (SKI-1)/Site-1 Protease (S1P). These processes are essential for fusion competence and incorporation of mature GP into nascent budding virion particles.

Within the family ''Arenaviridae'', arenaviruses were formerly all placed in the genus ''Arenavirus'', but in 2014 were divided into the genera ''Mammarenavirus'' for those with mammalian hosts and ''Reptarenavirus'' for those infecting snakes. Reptarenaviruses and mammarenavirus are separated by an impenetrable species barrier. Infected rodents cannot pass disease onto snakes, and IBD in captive snakes is not transmissible to humans. A third genus, ''Hartmanivirus'' (not to be confused with genus ''Haartmanvirus'' of vibrio phages in family ''Demerecviridae'', order ''Caudovirales''), has also been established, including other species that infect snakes. The organisation of the genome of this genus is typical of arenaviruses but their glycoproteins resemble those of filoviruses. Species in this genus lack the matrix protein. A fourth genus, ''Antennavirus'' has also been established to accommodate two arenaviruses found in striated frogfish (''Antennarius striatus''). Mammarenaviruses can be divided into two serogroups, which differ genetically and by geographical distribution: When the virus is classified "Old World" this means it was found in the Eastern Hemisphere in places such as Europe, Asia, and Africa. When it is found in the Western Hemisphere, in places such as Argentina, Bolivia, Venezuela, Brazil, and the United States, it is classified "New World". Lymphocytic choriomeningitis (LCM) virus is the only arenavirus to exist in both areas but is classified as an Old World virus. Old and New World area viruses appear to have diverged ~45,000 years ago. The Old World Mammarenaviruses originated ∼23.1-1.88 thousand years ago, most likely in Southern Africa while the New World Mammarenaviruses evolved in the Latin America-Caribbean region ∼41.4-3.3 thousand years ago. 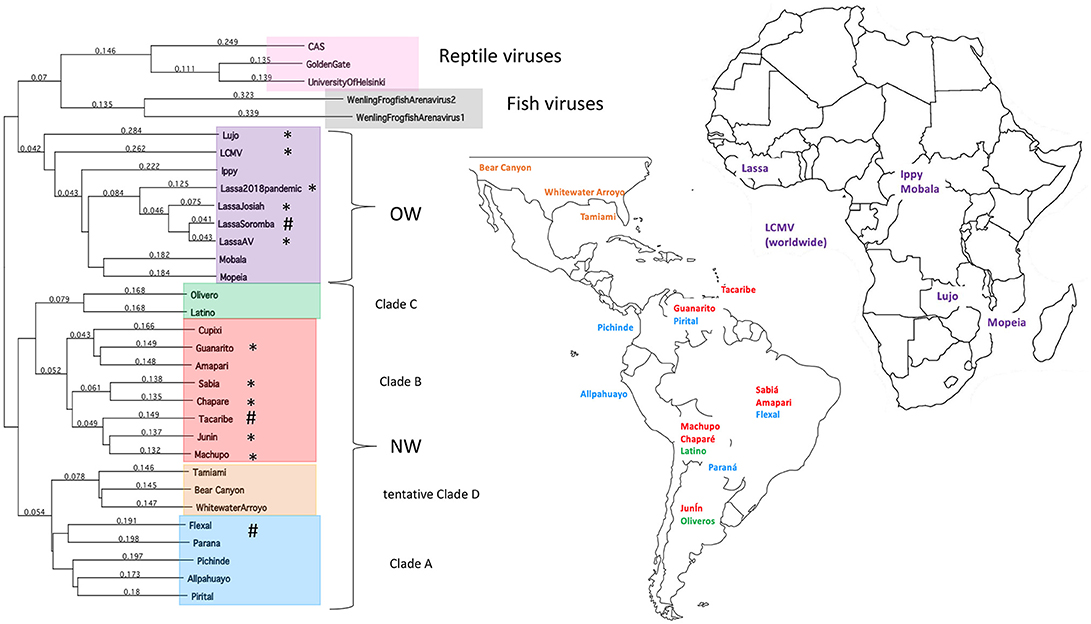 The evolution of the Mammarenavirus genus has been studied.