An amulet, also known as a good luck charm, is an object believed to confer protection upon its possessor. The word "amulet" comes from the Latin word amuletum, which Pliny's ''Natural History'' describes as "an object that protects a person from trouble". Anything can function as an amulet; items commonly so used include gems, statues, coins, drawings, plant parts, animal parts, and written words. Amulets which are said to derive their extraordinary properties and powers from magic or those which impart luck are typically part of folk religion or paganism, whereas amulets or sacred objects of formalised mainstream religion as in Christianity are believed to have no power of their own without being blessed by a clergyman, and they supposedly will also not provide any preternatural benefit to the bearer who does not have an appropriate disposition. Talisman and amulets have interchangeable meaning. Amulets refer to any object which holds an apotropaic function. An amulet is an object that is generally worn for protection and made from a durable material (metal or hard-stone). Amulets can be applied to paper examples as well; however, the vocabulary usage of talisman is often used to describe these. Amulets are sometimes confused with pendants, small aesthetic objects that hang from necklaces. Any given pendant may indeed be an amulet but so may any other object that purportedly protects its holder from danger.

The use of amulets, (''meket'') was widespread among both living and dead ancient Egyptians. They were used for protection and as a means of "...reaffirming the fundamental fairness of the universe". The oldest amulets found are from the predynastic Badarian Period, and they persisted all the way through to Roman times. Pregnant women would wear amulets depicting Taweret, the goddess of childbirth, to protect against miscarriage. The god Bes, who had the head of a lion and the body of a dwarf, was believed to be the protector of children. After giving birth, a mother would remove her Taweret amulet and put on a new amulet representing Bes. Amulets depicted specific symbols, among the most common are the ankh and the Eye of Horus, which represented the new eye given to Horus by the god Thoth as a replacement for his old eye, which had been destroyed during a battle with Horus’s uncle Seth. Amulets were often made to represent gods, animals or hieroglyphs. For example, the common amulet shape the scarab beetle is the emblem of the god Khepri. The most common material for such amulets was a kind of ceramic known as Egyptian faience or ''tjehenet'', but amulets were also made of stone, metal, bone, wood and gold. Phylacteries containing texts were another common form of amulet. Like the Mesopotamians, the ancient Egyptians had no distinction between the categories magic and medicine. Indeed for them "...religion was a potent and legitimate tool fro affecting magical cures". Each treatment was a complementary combination of practical medicine and magical spells. Magical spells against snakebite are the oldest magical remedies known from Egypt. The Egyptians believed that diseases stemmed from both supernatural and natural causes The symptoms of the disease determined which deity the doctor needed to invoke in order to cure it. Doctors were extremely expensive, therefore, for most everyday purposes, the average Egyptian would have relied on individuals who were not professional doctors, but who possessed some form of medical training or knowledge. Among these individuals were folk healers and seers, who could set broken bones, aid mothers in giving birth, prescribe herbal remedies for common ailments, and interpret dreams. If a doctor or seer was unavailable, then everyday people would simply cast their spells on their own without assistance. It was likely commonplace for individuals to memorize spells and incantations for later use. 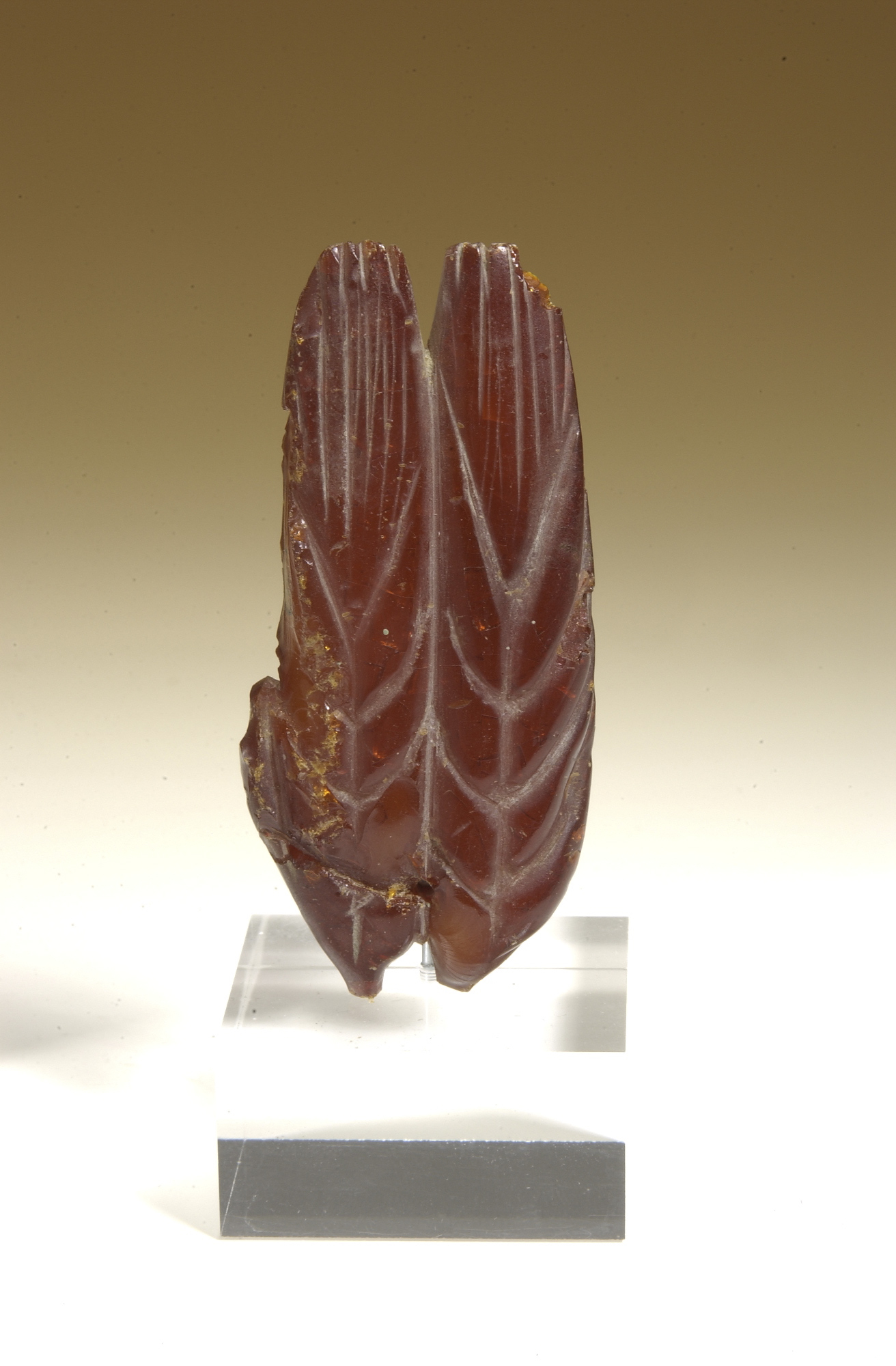 Amulets were particularly prevalent in ancient Roman society, being the inheritor of the ancient Greek tradition, and inextricably linked to Roman religion and magic (see magic in the Graeco-Roman world). Amulets are usually outside of the normal sphere of religious experience, though associations between certain gemstones and gods has been suggested. For example, Jupiter is represented on milky chalcedony, Sol on heliotrope, Mars on red jasper, Ceres on green jasper, and Bacchus on amethyst. Amulets are worn to imbue the wearer with the associated powers of the gods rather than for any reasons of piety. The intrinsic power of the amulet is also evident from others bearing inscriptions, such as ''vterfexix (utere fexix)'' or "good luck to the user." Amulet boxes could also be used, such as the example from part of the Thetford treasure, Norfolk, UK, where a gold box intended for suspension around the neck was found to contain sulphur for its apotropaic (evil-repelling) qualities. Children wore bullas and lunulas, and could be protected by amulet-chains known as ''Crepundia''.

Metal amulets in the form of flat sheets made of silver, gold, copper, and lead were also popular in Late Antiquity in Palestine and Syria as well as their adjacent countries (Mesopotamia, Minor Asia, Iran). Usually they were rolled up and placed in a metal container with loops to be carried by a necklace. They were incised with a needle with manifold incantation formulars and citations and references to the name of God (Tetragrammaton). Most of them are composed in various kinds of Aramaic (Jewish Aramaic, Samaritan Aramaic, Christian Palestinian Aramaic, Mandaic, Syriac) and Hebrew, but there exist also sometimes combinations with Greek.

In China, Taoist experts called ''fulu'' developed a special style of calligraphy that they said would be able to protect against evil spirits. The equivalent type of amulet in Japan is called an ''ofuda''. Mamorifuda are gofu amulets, that are talismans encased inside in small brocade bags that are carried on the person.

In antiquity and the Middle Ages, most Jews, Christians, and Muslims in the Orient believed in the protective and healing power of amulets or blessed objects. Talismans used by these peoples can be broken down into three main categories: talismans carried or worn on the body, talismans hung upon or above the bed of an infirm person, and medicinal talismans. This third category can be further divided into external and internal talismans. For example, an external amulet can be placed in a bath. Jews, Christians, and Muslims have also at times used their holy books in a talisman-like manner in grave situations. For example, a bed-ridden and seriously ill person would have a holy book placed under part of the bed or cushion.

Amulets are plentiful in the Jewish tradition, with examples of Solomon-era amulets existing in many museums. Due to the proscription of idols and other graven images in Judaism, Jewish amulets emphasize text and names. The shape, material, and color of a Jewish amulet makes no difference. Examples of textual amulets include the Silver Scroll, circa 630 BCE, and the still contemporary mezuzah and tefillin. A counter-example, however, is the Hand of Miriam, an outline of a human hand. Another non-textual amulet is the Seal of Solomon, also known as the hexagram or Star of David. In one form. it consists of two intertwined equilateral triangles, and in this form it is commonly worn suspended around the neck to this day. 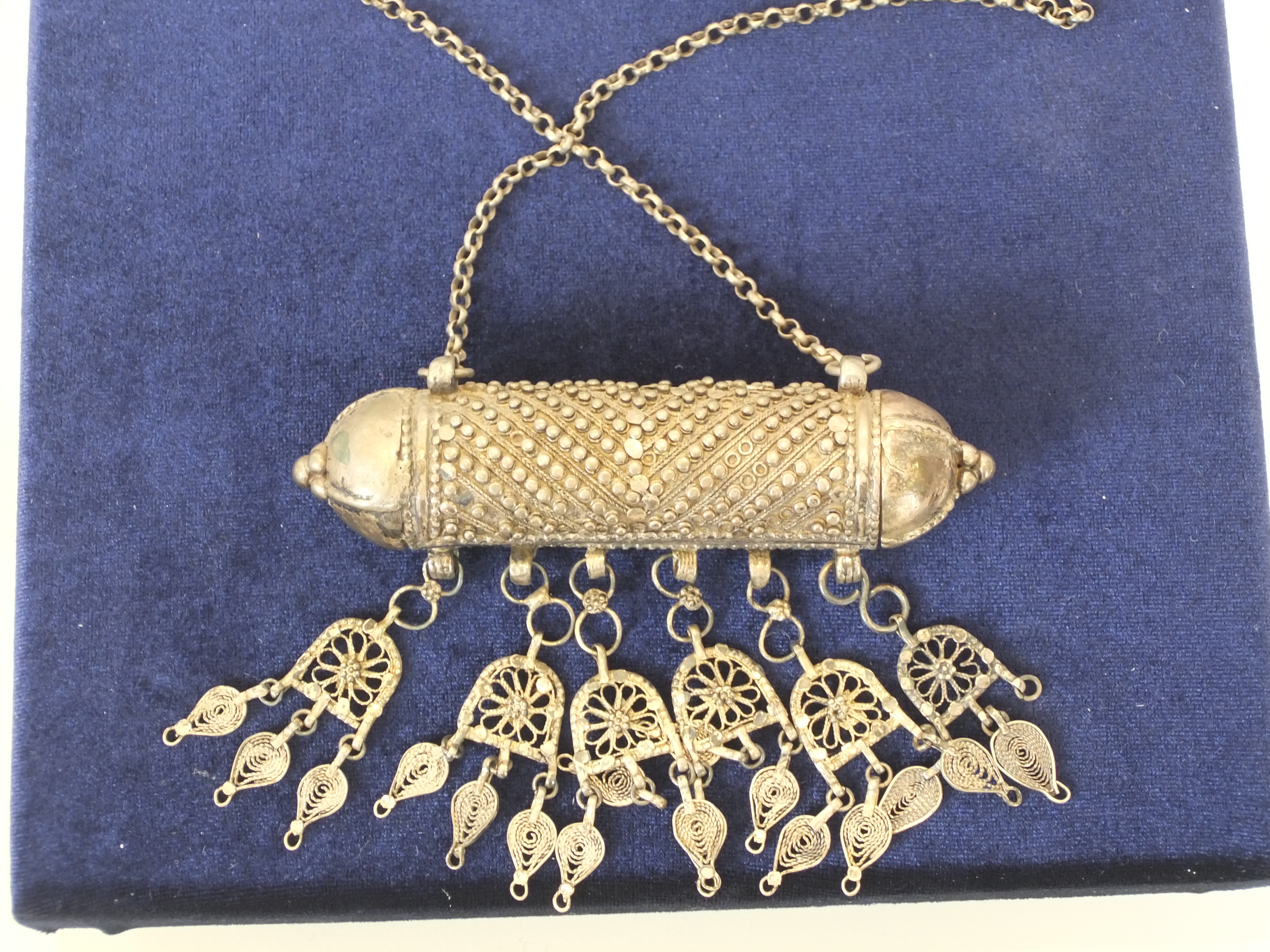 Another common amulet in contemporary use is the Chai (symbol)—( he|חַי "living" '), which is also worn around the neck. Other similar amulets still in use consist of one of the names of the god of Judaism, such as ה (He), יה (YaH), or שדי (Shaddai), inscribed on a piece of parchment or metal, usually silver. Among Jewish children in the 2nd-century CE, the practice of wearing amulets ( he|קמיעין) was so pervasive that one could distinguish between a Jewish child (who usually donned an amulet) and a non-Jewish child who did not usually wear them. During the Middle Ages, Maimonides and Sherira Gaon (and his son Hai Gaon) opposed the use of amulets and derided the "folly of amulet writers." Other rabbis, however, approved the use of amulets. Rabbi and famous kabbalist Naphtali ben Isaac Katz ("Ha-Kohen," 1645–1719) was said to be an expert in the magical use of amulets. He was accused of causing a fire that broke out in his house and then destroyed the whole Jewish quarter of Frankfurt, and of preventing the extinguishing of the fire by conventional means because he wanted to test the power of his amulets; he was imprisoned and forced to resign his post and leave the city.

The Roman Catholic Church maintains that the legitimate use of sacramentals in its proper disposition is encouraged only by a firm faith and devotion to the Triune God, and not by any magical or superstitious belief bestowed on the sacramental. In this regard, rosaries, scapulars, medals, and other devotional religious Catholic paraphernalia derive their power, not simply from the symbolism displayed in the object, but rather from the blessing of the Catholic Church. Lay Catholics are not permitted to perform solemn exorcisms, but they can use holy water, blessed salt, and other sacramentals, such as the Saint Benedict medal or the crucifix, for warding off evil. The crucifix, and the associated sign of the cross, is one of the key sacramentals used by Catholics to ward off evil since the time of the Early Church Fathers. The imperial cross of Conrad II (1024–1039) referred to the power of the cross against evil. A well-known amulet among Catholic Christians is the Saint Benedict medal which includes the ''Vade Retro Satana'' formula to ward off Satan. This medal has been in use at least since the 1700s, and in 1742 it received the approval of Pope Benedict XIV. It later became part of the Roman Catholic ritual. Some Catholic sacramentals are believed to defend against evil, by virtue of their association with a specific saint or archangel. The ''scapular of St. Michael the Archangel'' is a Roman Catholic devotional scapular associated with Archangel Michael, the chief enemy of Satan. Pope Pius IX gave this scapular his blessing, but it was first formally approved under Pope Leo XIII. The form of this scapular is somewhat distinct, in that the two segments of cloth that constitute it have the form of a small shield; one is made of blue and the other of black cloth, and one of the bands likewise is blue and the other black. Both portions of the scapular bear the well-known representation of the Archangel St. Michael slaying the dragon and the inscription "'" meaning "Who is like God?". Catholic saints have written about the power of holy water as a force that repels evil. Saint Teresa of Avila, a Doctor of the Church who reported visions of Jesus and Mary, was a strong believer in the power of holy water and wrote that she used it with success to repel evil and temptations. Since the 19th century, devout Spanish soldiers, especially Carlist units, have worn a patch with an image of the Sacred Heart of Jesus and the inscription ''detente bala'' ("stop, bullet"). Early Egyptian Christians made textual amulets with scriptural incipits, especially the opening words of the Gospels, the Lord’s Prayer and Psalm 91. These amulets have survived from late antiquity (c. 300–700 C.E.), mostly from Egypt. They were written in Greek and Coptic on strips of papyrus, parchment and other materials in order to cure bodily illnesses and/or to protect individuals from demons.

There is a long cultural tradition of using amulets in Islam, and in many Muslim-majority countries, tens of percent of the population use them.