Click Here for Items Related To - Administrative divisions of the Philippines
The Philippines is divided into four levels of administrative divisions with the lower three being defined in the Local Government Code of 1991 as local government units (LGUs). They are, from the highest to the lowest: # Regions ( fil|rehiyon), mostly used to organize national services. Of the 17 regions, only one – the Bangsamoro Autonomous Region in Muslim Mindanao – has an elected government to which the central government has devolved competencies. # Provinces ( fil|lalawigan or probinsya), independent cities ( fil|lungsod or siyudad), and one independent municipality (Pateros). # Component cities ( fil|lungsod or siyudad) and municipalities ( fil|bayan or munisipalidad) within a province. # Barangays (formerly known, and sometimes still referred to as, ''barrios'') within a city or municipality. Other divisions also exist for specific purposes: * Geographic island groups in popular and widespread use; * Local administrative districts in use by some local governments; * Judicial regions for regional trial courts; * Legislative districts for the election of legislators at national, regional, and local levels; * A special geographic area used for the organization of Bangsamoro barangays in Cotabato; and * Special-purpose districts for various government agencies.

''Administrative regions'' are groupings of geographically adjacent LGUs which are established, disestablished and modified by the President of the Philippines based on the need to more coherently make economic development policies and coordinate the provision of national government services within a larger area beyond the province level. No plebiscites have been conducted so far to democratically confirm the creation, abolition or alteration of the boundaries of regular administrative regions, as the Constitution does not mandate it. An administrative region is not a local government unit (LGU), but rather a group of LGUs to which the president has provided an unelected policy-making and coordinating structure, called the Regional Development Council (RDC). Metro Manila is recognized in law as a "special development and administrative region," and was thus given a metropolitan authority; the Metro Manila Council within the MMDA serves as the National Capital Region's RDC. Administrative regions are composed of provinces and/or independent cities, or, in the case of Pateros, an independent municipality. The Philippine Statistics Authority further divides the LGUs of Metro Manila into four numbered geographic districts for statistical purposes.

The 1987 Constitution allows for the creation of ''autonomous regions'' in the Cordillera Central of Luzon and in the Muslim-majority areas of Mindanao. However, only the Bangsamoro Autonomous Region in Muslim Mindanao and its predecessor, the Autonomous Region in Muslim Mindanao, have been approved by voters in plebiscites held in 1989, 2001 and 2019. Voters in the Cordilleras rejected autonomy in 1990 and 1998; hence the Cordillera Administrative Region remains as a regular administrative region with no delegated powers or responsibilities. The sole autonomous region at present, the Bangsamoro Autonomous Region in Muslim Mindanao, comprises local government units that have consented by plebiscite to be placed under the authority of the Bangsamoro Regional Government. An autonomous region, while possessing a government, is not a local government unit (LGU) ''per se'', as the autonomous regional government's organization and structure is not defined by the Local Government Code of 1991, unlike provinces, cities, municipalities and barangays. Rather, an autonomous region is a group of LGUs to which Congress has provided via statute a very specific form of regional governance structure, along with certain powers and responsibilities.

In the Local Government Code of 1991, a ''local government unit'' (LGU) can take the form of a province, a city, a municipality, or a barangay. All LGUs have local legislatures (''Sanggunian'') and local chief executives (governor, mayor, or barangay captain) that are elected by popular vote. Per the Local Government Code of 1991, section 25, the President of the Philippines exercises direct supervisory authority over provinces and independent cities (i.e., highly urbanized and independent component cities); thus, LGUs that belong to these categories form the primary level of LGUs in the Philippines. Pateros, by virtue of not belonging to any province, effectively also constitutes a primary level LGU.

A ''province'' is composed of component cities and municipalities, over which it exercises supervisory authority. Each province is headed by a governor. Its legislative body is the Sangguniang Panlalawigan.

Three different legal classes of cities exist in the Philippines. Independent cities, of which there are currently 38 – classified either as ''highly urbanized'' (33) or ''independent component'' (5) cities – are cities which are not under the jurisdiction of any province. Thus, these cities are autonomously governed, do not share their tax revenues with any province, and in most cases, their residents are not eligible to elect or be elected to provincial offices. Cities that are under the political jurisdiction of a province form the third legal class of cities, called ''component'' cities. The voters in these cities are allowed to vote and run for positions in the provincial government. ''Municipalities'' are always under the jurisdiction of a province, except for Pateros, which is self-governing. A city or municipality is divided into barangays, over which it exercises supervisory authority. A city or municipality is headed by a mayor. The Sangguniang Panlungsod is the legislative body for cities and Sangguniang Bayan for municipalities.

The ''barangay'' is the smallest local government unit in the Philippines. Although "barangay" is sometimes translated into English as "village," a barangay can be: * an urban neighborhood, such as a city block or a gated community (e.g., Forbes Park, Makati); * a sizable urban district (e.g., Payatas, Quezon City); * a single hamlet or village (e.g., Pag-asa, Kalayaan, Palawan); * a small town (e.g., Mangagoy, Bislig, Surigao del Sur); or * a rural district composed of disperse settlements (e.g., Nagacadan, Kiangan, Ifugao). Each barangay is headed by a Barangay Captain. Its local legislative body is the Sangguniang Barangay.

The Philippines is broadly divided into three traditional island groups: Luzon, the Visayas, and Mindanao. The Philippine flag's three stars are often taken to represent each of these geographical groupings. These island groups, however, have no specific administrative bodies, either elected or appointed, although many agencies and institutions, both government and private, use island groupings for certain purposes. For example, the Palarong Pambansa rotates yearly hosting duties among the island groups, while the League of Municipalities of the Philippines organizes its members and meetings by Luzon, Visayas and Mindanao "clusters."

Some LGUs use geographic divisions that are solely used for administrative purposes.

Many barangays are divided into ''sitios'' and ''puroks''. Sitios are usually hamlets within rural barangays where human settlement is polycentric, i.e., multiple communities spread across a wide area, separated by farmland, mountains, or water. Puroks are often neighborhoods or zones in densely populated areas of barangays of more urban character. Purok and sitio boundaries are rarely defined precisely and may use natural landmarks such as roads, rivers or other natural features to unofficially delineate divisions. A single sitio or purok, or groups of these, form the basis of creating a new barangay. Sitios and puroks are not local government units and therefore do not officially have an organized government subordinate to the barangay. However, there are sometimes unofficial arrangements that result in direct representation of purok or sitio interests in the barangay government. For example, a barangay council member may be officially designated as a purok leader, while sitio leaders may be appointed and drawn from the hamlet's residents. 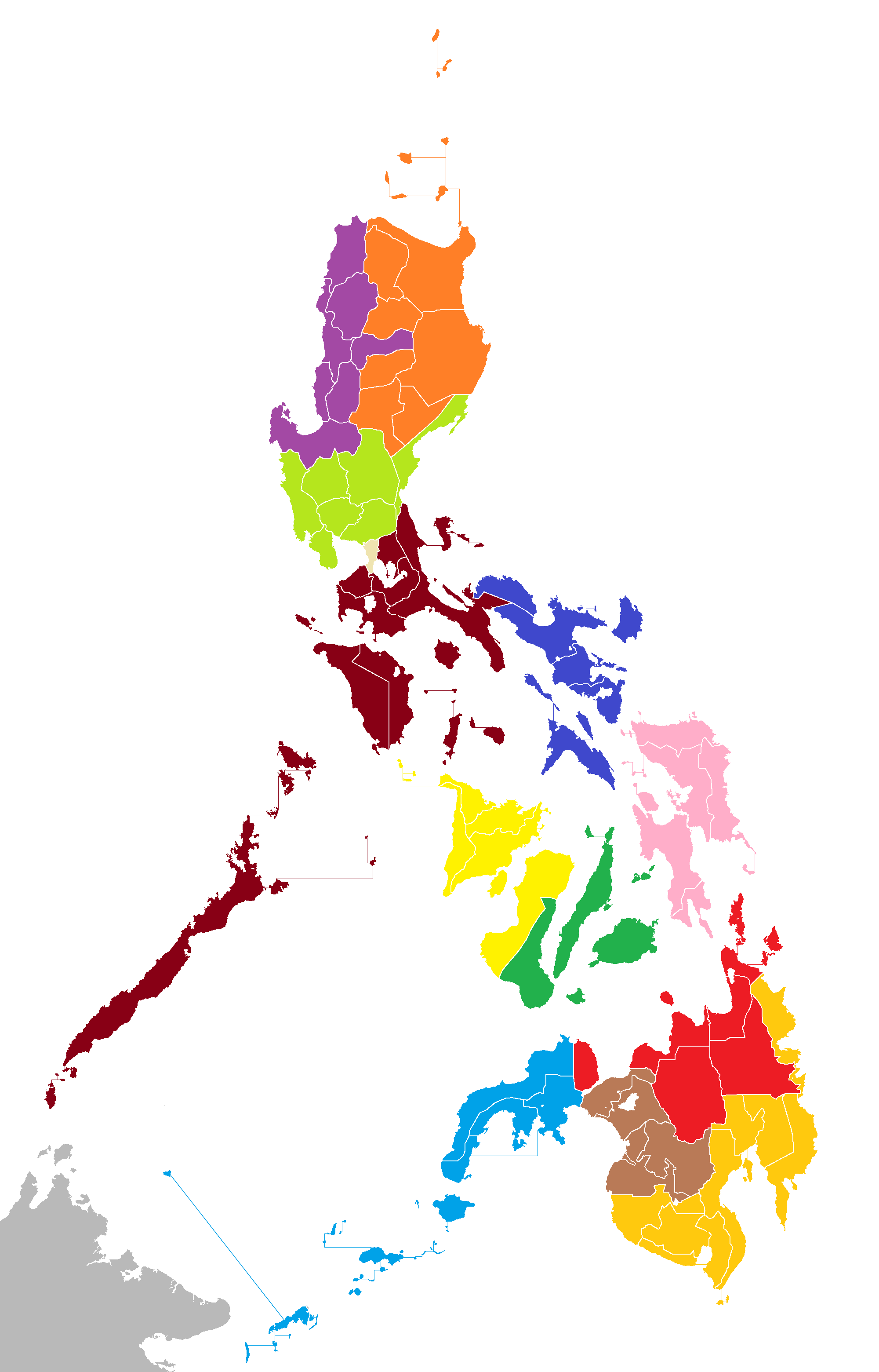 The Philippines is divided into thirteen ''judicial regions'', to organize the judiciary. The judicial regions still reflect the original regional configuration introduced by President Ferdinand Marcos during his rule, except for the transfer of Aurora to the third judicial region from the fourth. These judicial regions are used for the appointment of judges of the different Regional Trial Courts.

To elect legislators at national, regional, and local levels, the Philippines is divided into ''legislative districts''.

The electoral constituencies for the election of territory-based members of the House of Representatives of the Philippines are more precisely ''representative'' or ''congressional districts''. Each province is guaranteed at least one seat, and more populous provinces are also provided more. Many cities that have a population of at least 250,000 inhabitants are also granted one or more seats. If a province or a city is composed of only one legislative district, it said to be the ''lone district'' (e.g., the "Lone District of Guimaras"). Multiple districts within more populous cities and provinces are given numerical designations (e.g., the "2nd District of Cagayan").

The following table summarizes the number and structure of regions, provinces, municipalities, and cities in the Philippines as of March 31, 2020. Filipino names are placed in brackets.