Lavender Hill is a hill, and a shopping and residential street, near Clapham Junction in Battersea, south London. Lavender Hill forms the section of the A3036 as it rises eastwards out of the Falconbrook valley at Clapham Junction, and retains that name for approximately 1.3 km to the corner of Queenstown Road in Battersea, beyond which it is called Wandsworth Road towards Vauxhall.

The earliest known reference to the name 'Lavender Hill' is in 1774 when a Mr Porter, advertising a reward for the return of his lost pony, described it as having strayed or been stolen from 'a Field on Lavender-Hill', suggesting that the name was already widely known. The road formed part of the Southwark to Kingston Turnpike from 1717. The name refers to the commercial cultivation of lavender on the gentle north-facing slopes of this part of the Thames estuary – helped by well-drained soil, fresh air and several natural springs. The first building to reflect the name was Lavender Hall on the south side of the road in 1790. The road itself, which ran just below the crest of the hill, was not widely referred to as Lavender Hill until the later 1800s. Several smaller streets developed in the Victoria era, including Lavender Gardens, Lavender Walk (an ancient farm lane) and Lavender Sweep, also reflect the area's historic lavender industry.

In an 1848 painting, the painter refers to Lavender Hill, although this cannot reasonably be said to be from the Lavender Hill (road), more the north slope of the topographic feature. Until the 1860s Lavender Hill was mostly an area of open farmland, with small-scale development at both ends. At the western end there was a crossing of the Falconbrook river with several farms. The Chestnuts, a farmhouse built in 1812, survived and has been incorporated into the modern street plan halfway along Mossbury Road. The earliest reference to the still-existing ''Falcon'' public house at the west end of the street is in 1767. After the 1780s a few large villas were built on the hillside, owned by wealthy residents attracted by the expansive views over Battersea Fields and the Thames towards London. The earliest was Rush Hill House, developed in around 1770, whose fate was typical of many of these early buildings: as the area developed, its grounds were sold off in 1872 and developed as a new street and terrace of houses (Rush Hill Terrace), and the house itself survived until 1887 before being replaced by a further terrace of houses (Crombie Mews).

Lavender Place was developed in around 1826 as a row of cottages at the eastern end of what is now Lavender Hill. The clean air and supply of fresh water meant Lavender Place became home in the early-to-mid nineteenth century to several laundresses, who bleached and dried linen on the grassland behind the houses. Lavender Place extended some distance into what is now Wandsworth Road, and remained a separate street for many years (one ceramic street name for 'Lavender Place' is still visible). An acetic acid distillery, ''Beaufoy's Acetic Acid Works'', was also located at the eastern end (for many years a public house called the Beaufoy remained at this end of Lavender Hill; the only surviving trace of the distillery is now a short street called Beaufoy Road). In the 1870s the houses on Lavender Terrace were adapted to form a terrace of shops, and the houses on Lavender Place were eventually renumbered to become part of Lavender Hill. 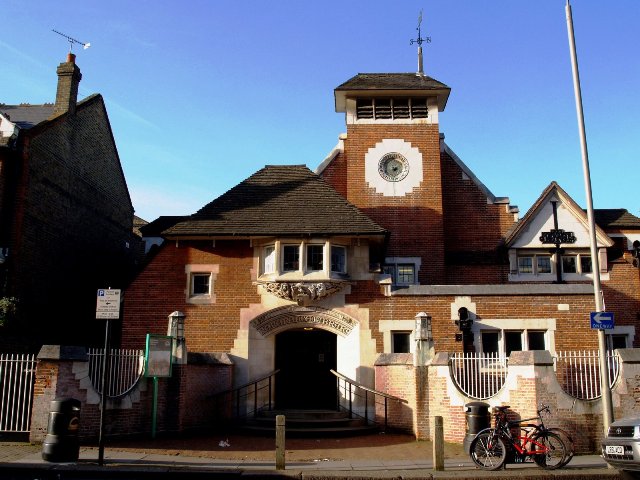 The opening of Clapham Junction railway station in 1863 led to rapid residential and commercial development along the street, with construction of a large number of houses as well as many major civic and commercial buildings. By 1885 it was such a busy commercial district that Arding & Hobbs, the largest department store south of the River Thames, was built. The imposing Church of the Ascension, designed by James Brooks, was built in 1883 to cater to the growing population of the neighbouring Shaftesbury Estate. A Welsh Methodist chapel was built on Beauchamp Road, reflecting what was once a significant Welsh population. Battersea Central Library was opened in March 1890, following an architectural competition that was won by Edward William Mountford (who also designed the Old Bailey) with a mildly Flemish Renaissance design that was described as "inexpensively devised and designed to not needlessly clash with the adjoining houses which are of the speculating builders’ type of work". It quickly proved popular and saw several subsequent extensions, notably with the addition in 1924 of a reference library on Altenburg Gardens (in a part of the original plot that had originally been intended for a museum) that was designed by Henry Hyams. Battersea Town Hall was opened in 1893, as the administrative headquarters of the Metropolitan Borough of Battersea, and the large Grade II* listed building is one of Lavender Hill's most prominent features. When the Borough was abolished in 1965, the Town Hall became redundant. After being threatened with demolition for some years, plans to build a new library and swimming pool on the site were finally rejected following a campaign by residents to save the building, and it was then converted into a community arts centre in 1974.