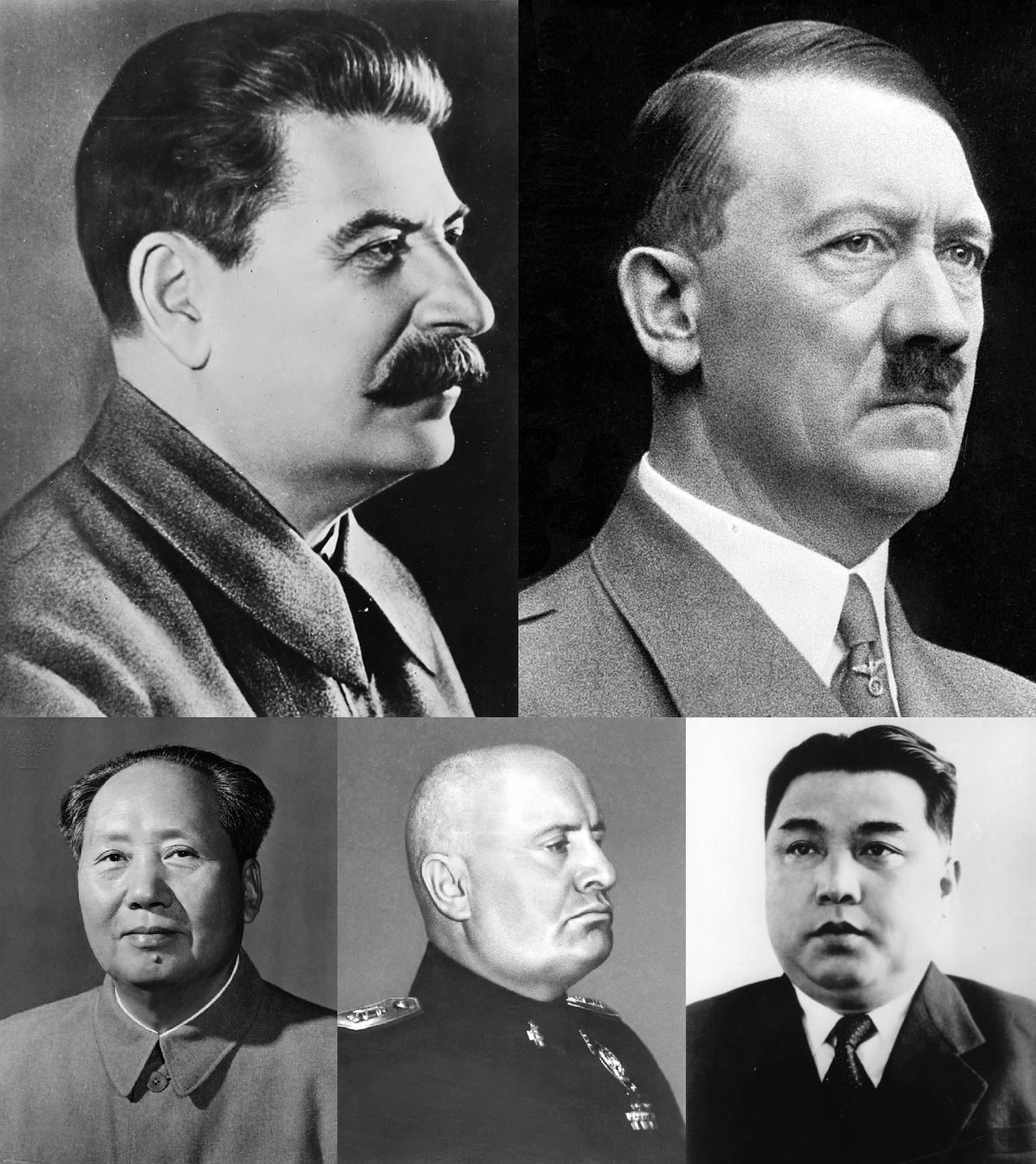 Totalitarianism is a concept for a form of government or political system that prohibits opposition parties, restricts individual opposition to the state and its claims, and exercises an extremely high degree of control over public and private life. It is regarded as the most extreme and complete form of authoritarianism. In totalitarian states, political power has often been held by autocrats (i.e. dictators or absolute monarchs) who employ all-encompassing campaigns in which propaganda is broadcast by state-controlled mass media. Totalitarian regimes are often characterized by extensive political repression, a complete lack of democracy, widespread personality cultism, absolute control over the economy, massive censorship, mass surveillance, limited freedom of movement (most notably freedom to leave the country) and widespread use of state terrorism. Other aspects of a totalitarian regime include the use of concentration camps, repressive secret police, religious persecution or state atheism, the common practice of executions, fraudulent elections, possible possession of weapons of mass destruction and a potential for state-sponsored mass murder and genocides. Historian Robert Conquest describes a totalitarian state as one which recognizes no limit on its authority in any sphere of public or private life and it extends that authority to whatever length is feasible. As a political ideology, totalitarianism is distinctly modern and has complex historical roots. Historian and philosopher Karl Popper traced its roots to Georg Wilhelm Friedrich Hegel's conception of state and especially to the political philosophy of Karl Marx. Others, like Theodor W. Adorno and Max Horkheimer, trace the origin of totalitarian doctrines to the Enlightenment, and especially to idea that man 'has become the master of the world', a master unbound by any links to nature, society, and history'. In the twentieth century the idea of 'absolute state power', was developed by Italian fascists and concurrently in Germany, by jurist and later Nazi academic Carl Schmitt working during the Weimar Republic (1920s). Italian Fascist Benito Mussolini proclaimed: "Everything within the state, nothing outside the state, nothing against the state." Schmitt used the term ''Totalstaat'' in his influential 1927 work ''The Concept of the Political'' on the legal basis of an all-powerful state. The term gained prominence in Western anti-communist political discourse during the Cold War era as a tool to convert pre-World War II anti-fascism into post-war anti-communism. Totalitarian regimes are different from other authoritarian regimes. The latter denotes a state in which the single power holder, usually an individual dictator, a committee, a junta or an otherwise small group of political elite, monopolizes political power. In this sense, "the authoritarian state ..is only concerned with political power and as long as it is not contested it gives society a certain degree of liberty." Radu Cinpoes writes authoritarianism "does not attempt to change the world and human nature." In contrast, Richard Pipes writes a totalitarian regime attempts to control virtually all aspects of the social life, including the economy, education, art, science, private life and morals of citizens. Some totalitarian governments may promote an elaborate ideology, with "e officially proclaimed ideology" penetrating "into the deepest reaches of societal structure and the totalitarian government seeks to completely control the thoughts and actions of its citizens." It also mobilizes the whole population in pursuit of its goals. Carl Joachim Friedrich wrote that "a totalist ideology, a party reinforced by a secret police, and monopoly control of ..industrial mass society" are the three features of totalitarian regimes that distinguish them from other autocracies."

The academic field of Sovietology after World War II and during the Cold War was dominated by the "totalitarian model" of the Soviet Union, stressing the absolute nature of Joseph Stalin's power. The "totalitarian model" was first outlined in the 1950s by Carl Joachim Friedrich, who argued that the Soviet Union and other Communist states were "totalitarian" systems, with the personality cult and almost unlimited powers of the "great leader" such as Stalin. The "revisionist school" beginning in the 1960s focused on relatively autonomous institutions which might influence policy at the higher level. Matt Lenoe described the "revisionist school" as representing those who "insisted that the old image of the Soviet Union as a totalitarian state bent on world domination was oversimplified or just plain wrong. They tended to be interested in social history and to argue that the Communist Party leadership had had to adjust to social forces." These of "revisionist school" such as J. Arch Getty and Lynne Viola challenged the "totalitarian model" approach to Communist history and were most active in the former Communist states' archives, especially the State Archive of the Russian Federation related to the Soviet Union. According to John Earl Haynes and Harvey Klehr, the historiography is characterized by a split between "traditionalists" and "revisionists." "Traditionalists" characterize themselves as objective reporters of an alleged totalitarian nature of communism and Communist states. They are criticized by their opponents as being anti-communist, even fascist, in their eagerness on continuing to focus on the issues of the Cold War. Alternative characterizations for traditionalists include "anti-communist", "conservative", "Draperite" (after Theodore Draper), "orthodox" and "right-wing." Norman Markowitz, a prominent "revisionist", referred to them as "reactionaries", "right-wing romantics" and "triumphalist" who belong to the "HUAC school of CPUSA scholarship." "Revisionists", characterized by Haynes and Klehr as historical revisionists, are more numerous and dominate academic institutions and learned journals. A suggested alternative formulation is "new historians of American communism", but that has not caught on because these historians describe themselves as unbiased and scholarly, contrasting their work to the work of anti-communist "traditionalists", whom they term biased and unscholarly. According to Michael Scott Christofferson, "Arendt's reading of the post-Stalin USSR can be seen as an attempt to distance her work from 'the Cold War misuse of the concept.'" Historian John Connelly wrote that ''totalitarianism'' is a useful word but that the old 1950s theory about it is defunct among scholars, arguing:

The word is as functional now as it was 50 years ago. It means the kind of regime that existed in Nazi Germany, the Soviet Union, the Soviet satellites, Communist China, and maybe Fascist Italy, where the word originated. ..Who are we to tell Václav Havel or Adam Michnik that they were fooling themselves when they perceived their rulers as totalitarian? Or for that matter any of the millions of former subjects of Soviet-type rule who use the local equivalents of the Czech ''totalita'' to describe the systems they lived under before 1989? It is a useful word and everyone knows what it means as a general referent. Problems arise when people confuse the useful descriptive term with the old "theory" from the 1950s.

The notion that totalitarianism is total political power which is exercised by the state was formulated in 1923 by Giovanni Amendola, who described Italian Fascism as a system which was fundamentally different from conventional dictatorships. The term was later assigned a positive meaning in the writings of Giovanni Gentile, Italy's most prominent philosopher and leading theorist of fascism. He used the term ''totalitario'' to refer to the structure and goals of the new state which was to provide the "total representation of the nation and total guidance of national goals." He described totalitarianism as a society in which the ideology of the state had influence, if not power, over most of its citizens. According to Benito Mussolini, this system politicizes everything spiritual and human: "Everything within the state, nothing outside the state, nothing against the state." One of the first people to use the term ''totalitarianism'' in the English language was the Austrian writer Franz Borkenau in his 1938 book ''The Communist International'', in which he commented that it united the Soviet and German dictatorships more than it divided them. The label ''totalitarian'' was twice affixed to Nazi Germany during Winston Churchill's speech of 5 October 1938, before the House of Commons in opposition to the Munich Agreement, by which France and Great Britain consented to Nazi Germany's annexation of the Sudetenland. Churchill was then a backbencher MP representing the Epping constituency. In a radio address two weeks later, Churchill again employed the term, this time applying the concept to "a Communist or a Nazi tyranny." José María Gil-Robles y Quiñones, the leader of the historic Spanish reactionary party called the Spanish Confederation of the Autonomous Right (CEDA), declared his intention to "give Spain a true unity, a new spirit, a totalitarian polity" and went on to say: "Democracy is not an end but a means to the conquest of the new state. When the time comes, either parliament submits or we will eliminate it." General Francisco Franco was determined not to have competing right-wing parties in Spain and CEDA was dissolved in April 1937. Later, Gil-Robles went into exile. George Orwell made frequent use of the word ''totalitarian'' and its cognates in multiple essays published in 1940, 1941 and 1942. In his essay "Why I Write", Orwell wrote: "The Spanish war and other events in 1936–37 turned the scale and thereafter I knew where I stood. Every line of serious work that I have written since 1936 has been written, directly or indirectly, against totalitarianism and for democratic socialism, as I understand it." He feared that future totalitarian regimes could exploit technological advances in surveillance and mass media in order to establish a permanent and world-wide dictatorship which would be incapable of ever being overthrown, writing: "If you want a vision of the future, imagine a boot stamping on a human face — forever." During a 1945 lecture series entitled "The Soviet Impact on the Western World" and published as a book in 1946, the British historian E. H. Carr wrote: "The trend away from individualism and towards totalitarianism is everywhere unmistakable" and that Marxism–Leninism was by far the most successful type of totalitarianism as proved by Soviet industrial growth and the Red Army's role in defeating Germany. According to Carr, only the "blind and incurable" could ignore the trend towards totalitarianism. In ''The Open Society and Its Enemies'' (1945) and ''The Poverty of Historicism'' (1961), Karl Popper articulated an influential critique of totalitarianism. In both works, Popper contrasted the "open society" of liberal democracy with totalitarianism and argued that the latter is grounded in the belief that history moves toward an immutable future in accordance with knowable laws.

Non-political aspects of the culture and motifs of totalitarian countries have themselves often been labeled innately ''totalitarian''. In 2009, Theodore Dalrymple, a British author, physician and political commentator, has written for ''City Journal'' that brutalist structures are an expression of totalitarianism given that their grand, concrete-based design involves destroying gentler, more-human places such as gardens. In 1949, George Orwell described the Ministry of Truth in ''Nineteen Eighty-Four'' as an "enormous, pyramidal structure of white concrete, soaring up terrace after terrace, three hundred metres into the air." ''The Times'' columnist Ben Macintyre wrote that it was "a prescient description of the sort of totalitarian architecture that would soon dominate the Communist bloc." In contrast to these views, several authors have seen brutalism and socialist realism as modernist art forms which brought an ethos and sensibility in art. Another example of totalitarianism in architecture is the panopticon, a type of institutional building designed by English philosopher and social theorist Jeremy Bentham in the late 18th century. The concept of the design is to allow a watchman to observe (''-opticon'') all (''pan-'') inmates of an institution without their being able to tell whether or not they are being watched. It was invoked by Michel Foucault in ''Discipline and Punish'' as a metaphor for "disciplinary" societies and their pervasive inclination to observe and normalize. Foucault's Panopticon theory has been criticized by David W. Garland for providing little theoretical basis for the possibility of resistance within this "totalitarian" prison.