''Tapayan'' or ''tempayan'' (also known as ''balanga'', ''belanga'', or ''banga'') are large wide-mouthed earthenware or stoneware jars found in various Austronesian cultures in island Southeast Asia. Their various functions include fermenting rice (''tapai''), fermenting vinegar or alcoholic beverages, storing food and water, cooking, and burial of the deceased. The term ''tapayan'' also include the imported ''martaban'' stoneware (Dutch: ''martavanen''), originally from kilns in Southern China and Indochina. These were used primarily as storage jars for foodstuffs and valuable trade goods during ship voyages, but were highly valued as trade goods themselves. They became heirlooms and symbols of wealth and status among various indigenous cultures in the islands of Southeast Asia.

''Tapayan'' is derived from Proto-Malayo-Polynesian *tapay-an which refers to large earthen jars originally used to ferment rice wine (''tapai''). In modern Austronesian languages, derivatives include ''tapayan'' (Tagalog, Ilocano and various Visayan languages), ''tapj-an'' (Ibaloi), and ''tapáy-an'' (Hanunó'o) in the Philippines; and ''tepayan'' (Iban) and ''tempayan'' (Javanese and Malay) in Brunei, Malaysia, and Indonesia. ''Balanga'' is derived from Proto-Philippine *balangaq ("water jar"). Cognates include ''balanga'' and ''banga'' (Tagalog, Ilocano, Pangasinan, most Visayan languages), ''vangaq'' (Ivatan), ''byanga'' (Kalinga), and ''balangaq'' (Kapampangan) in the Philippines; and ''balanga'', ''belanga'', or ''blanga'' in Indonesia and Malaysia. 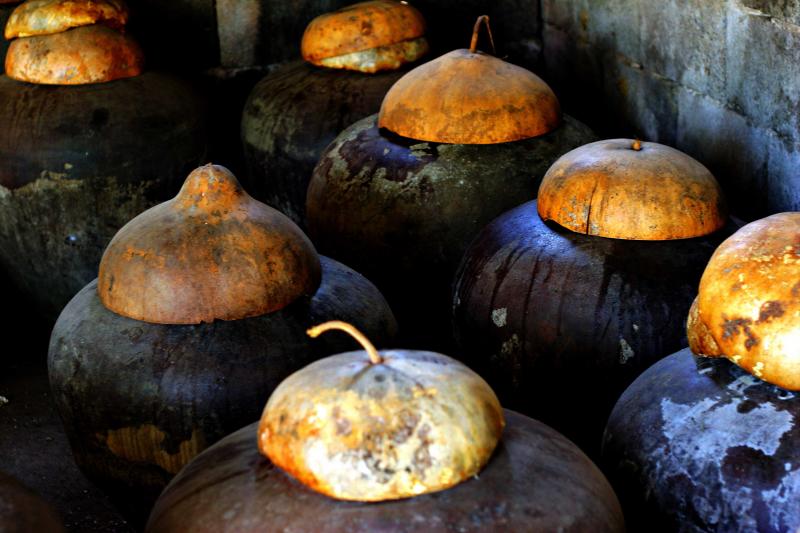 ''Tapayan'' jars range in size from to larger than . They typically have bulbous "shoulders" and flat unadorned bases. Horizontal (lug) or vertical handles may be present, to a maximum of eight. The mouth of the jars were typically wide, but jars used for storing wine can have relatively smaller mouths and were tightly covered to prevent the alcohol from evaporating. Early native ''tapayan'' were mostly unglazed, while later ''tapayan'' and imported ''martaban'' were glazed (usually on the outside) and were thus more suited for storing liquids.

''Tapayan'' in the Philippines are most commonly used for water storage, fermentation, and cooking. ''Tapayan'' was distinguished from the much smaller cooking clay pot (''palayok'' or ''kulon''). ''Tapayan'' are also known as ''kalamba'' or ''angang'' in Tagalog and Itawis. ''Tapayan'' used exclusively for storing water are sometimes called ''banga'' or ''balanga'', to distinguish them from other ''tapayan''. ''Banga'' were an essential part of traditional Filipino kitchens and were normally kept in the ''banggera'', the kitchen counter made of slatted bamboo that extends from the outer walls of the house. Specialized ''tapayan'' used for fermenting food products, with thicker walls and an airtight cover, are also distinguished as ''burnay'' in Ilocano. 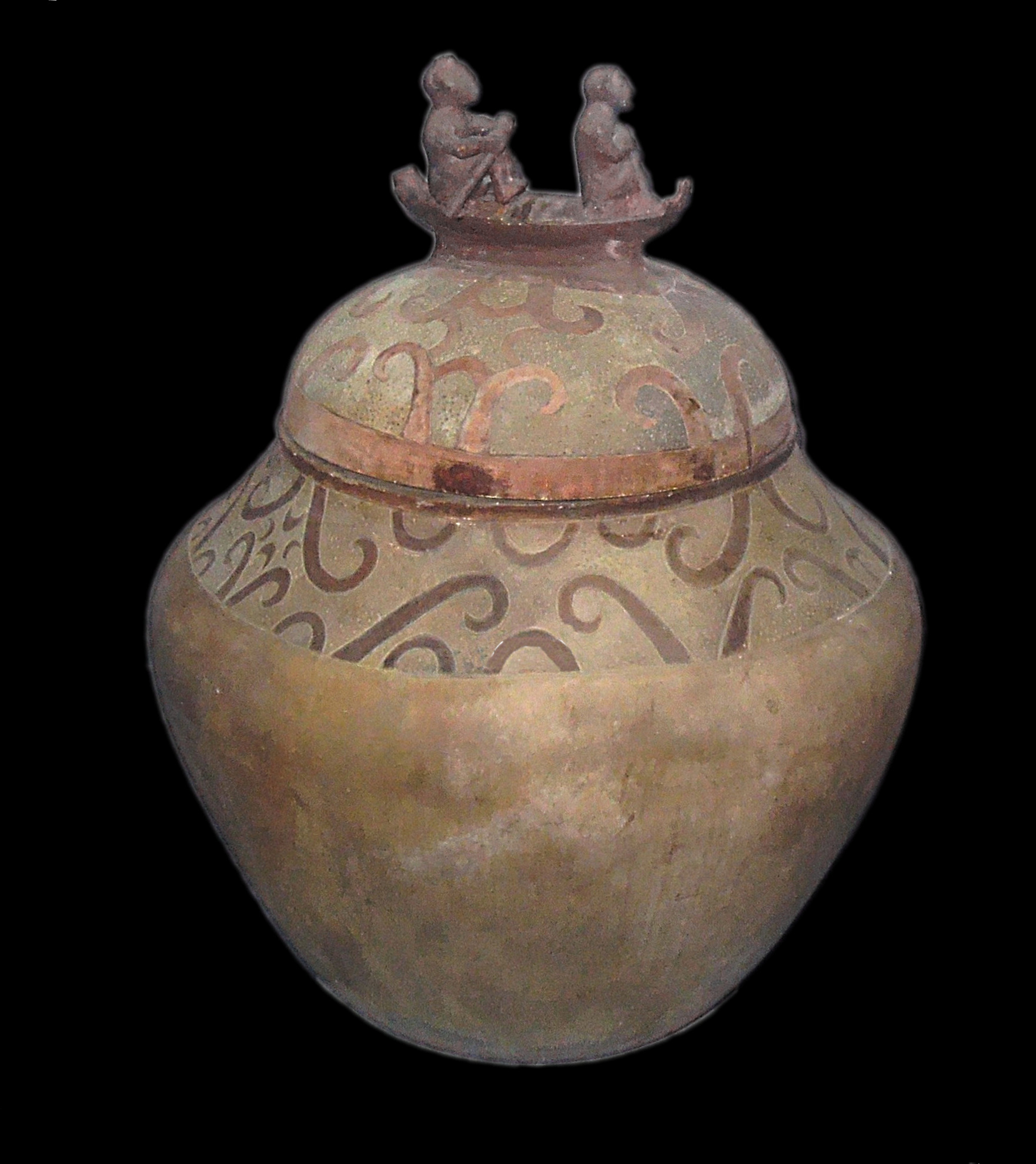 ''Tapayan'' as well as other more specialized urns, are also used as funerary jars in ancient Austronesian cultures. They are used to store the skeletal remains of deceased people. The oldest example of which is the ornate Manunggul Jar, dated 890-710 BCE, from the Tabon Caves of Palawan, Philippines.

''Martaban'' glazed stoneware were usually imported. They were originally stoneware made in Southern China from at least the Han dynasty period (206 BCE - 220 CE), but in later centuries also included stoneware made in Thailand, Myanmar, Cambodia, Laos, Vietnam, and island Southeast Asia itself by natives and Chinese migrants. The name ''martaban'' is from the port city of Martaban (modern Mottama, Myanmar) an important trading port in the Maritime Silk Road. The term ''martaban'' is also used in the Near East (and may be the source of the terms for marzipan), but in contrast to Southeast Asian ''martaban'', they referred to Chinese celadon greenware. Vietnamese stoneware were also sometimes distinguished from ''martaban'' as ''guci'' (also ''gusi'', ''gusih'', ''guchi'', or ''gutchi'') from Giao Chỉ, the old name for northern Vietnam; while Thai stoneware were distinguished as ''syam'', from Siam or Sayam, the old name of Thailand. ''Martaban'' were used primarily as storage jars for foodstuffs (like grain, wine, candied fruits, and spices) and valuable trade goods (like opium and oils) during ship voyages. But they became highly valued as trade goods themselves by the natives, even more so than the Kraak and Swatow porcelain favored by European traders. The jars (and their contents) were traded to the natives for luxury goods from Southeast Asia like resin, gum, bird's nest, ''trepang'' (sea cucumbers), and pearls. Because of their high value, ''martaban'' are typically not used for everyday purposes by Austronesian cultures unlike ordinary ''tapayan''.

''Martaban'' were treated heirlooms and symbols of wealth and status among various indigenous cultures in the islands of Southeast Asia. They were often displayed in the houses of nobles and prominent families. There can be such a profusion of them that the Scottish navigator Thomas Forrester once described the audience room of a ''datu'' in Luzon as having the "appearance of a china shop", due to around thirty ''martaban'' being displayed prominently in shelves. Among the Iban people of Borneo, the most valuable ''martaban'' were equivalent to the value of a male slave. Smashing one accidentally can result in the offender becoming enslaved by the jar's owner, unless they can replace it with a jar of similar value as well as additional compensation.

Another notable example are the ''balanga'' of the Dayak people. Originally from China, they typically had very large mouths and were are somewhat conical in shape. They usually featured dragon designs hence they are sometimes referred to as "dragon jars". They were prized as heirlooms (''pusaka'' or ''pesaka'') and in recent times have become a symbol of "Dayakness". Aside from monetary value, ''martaban'' also had great spiritual and symbolic value. Inheritance of specific jars can mean inheritance of the social status of the bequeather as well, especially among aristocratic families. They can also be used to seal peace treaties and agreements across different tribes. Some jars have become integrated into native religious ceremonies like marriage rituals, funerals, and ancestor worship. They have also become associated with native myths, especially in connection to the animistic underworld. Some are regarded to have acquired their own "souls" (Filipino ''anito'', Iban ''antu'', etc.) and were anthropomorphized as having characteristics like genders and personal names. Especially the "talking jars" of the Philippines, which could purportedly talk, roam around, and shapeshift. They were even regarded as being "married" to other jars and having "child" jars.

, also known as "Luzon jars", were dark-brown to purple-black ''tapayan'' from the island of Luzon in the northern Philippines. These were highly sought after by Japanese traders in the 16th century Nanban trade and remain as valuable antique heirlooms in modern Japan. They are primarily used for the Japanese tea ceremony (''chanoyu''). They were prized for their simplicity and rough, often uneven design, epitomizing the traditional Japanese aesthetics of ''wabi-sabi'' ("perfection in imperfection"). The Spanish historian Antonio de Morga in his ''Sucesos de la Islas Filipinas'' (1609) described ''Rusun'' jars as thus: ''Rusun'' jars were part of what is collectively known as Mishima ("three islands") ware. With the other two islands being indigenous Taiwan and the unidentified "Amakawa".