Fax (short for facsimile), sometimes called telecopying or telefax (the latter short for telefacsimile), is the telephonic transmission of scanned printed material (both text and images), normally to a telephone number connected to a printer or other output device. The original document is scanned with a fax machine (or a telecopier), which processes the contents (text or images) as a single fixed graphic image, converting it into a
bitmap In computing Computing is any goal-oriented activity requiring, benefiting from, or creating computing machinery. It includes the study and experimentation of algorithmic processes and development of both computer hardware , hardware and softw ...

, and then transmitting it through the telephone system in the form of audio-frequency tones. The receiving fax machine interprets the tones and reconstructs the image, printing a paper copy. Early systems used direct conversions of image darkness to audio tone in a continuous or analog manner. Since the 1980s, most machines modulate the transmitted audio frequencies using a digital representation of the page which is compressed to quickly transmit areas which are all-white or all-black.

Scottish inventor
Alexander Bain Alexander Bain (11 June 1818 – 18 September 1903) was a Scottish philosopher and educationalist in the British school of empiricism and a prominent and innovative figure in the fields of psychology Psychology is the science of min ...
worked on chemical mechanical fax type devices and in 1846 was able to reproduce graphic signs in laboratory experiments. He received British patent 9745 on May 27, 1843 for his "Electric Printing Telegraph".
Frederick Bakewell Frederick Collier Bakewell (29 September 1800 – 26 September 1869) was an English physicist who improved on the concept of the facsimile machine introduced by Alexander Bain in 1842 and demonstrated a working laboratory version at the 18 ...
made several improvements on Bain's design and demonstrated a telefax machine. The
Pantelegraph The pantelegraph (Italian: ''pantelegrafo''; French: ''pantélégraphe'') was an early form of facsimile machine transmitting over normal telegraph lines developed by Giovanni Caselli, used commercially in the 1860s, that was the first such dev ...

. He introduced the first commercial telefax service between Paris and Lyon in 1865, some 11 years before the invention of the
telephone A telephone is a telecommunication Telecommunication is the transmission of information by various types of technologies over wire A wire is a single usually cylindrical A cylinder (from Greek Greek may refer to: Greece Anyt ...

invented the '' Bildtelegraph'', widespread in continental Europe especially following a widely noticed transmission of a wanted-person photograph from Paris to London in 1908, used until the wider distribution of the radiofax. Its main competitors were the ''Bélinographe'' by
Édouard Belin Édouard Belin (5 March 1876 – 4 March 1963) was a French photographer and inventor. In 1907 Belin invented a phototelegraphic apparatus called the Bélinographe (télestéréographe)—a system for receiving photographs 396x396px, ... 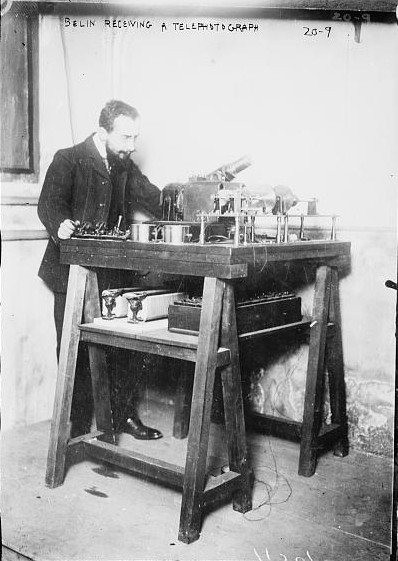 first, then since the 1930s the ''
Hellschreiber The Hellschreiber, Feldhellschreiber or Typenbildfeldfernschreiber (also Hell-Schreiber named after its inventor Rudolf Hell) is a facsimile '', a famous illuminated manuscript, is on view to both the public and to scholars only in the form of ...
'', invented in 1929 by German inventor
Rudolf Hell Rudolf Hell (19 December 1901 – 11 March 2002) was a German inventor. He was born in Eggmühl, Germany. From 1919 to 1923 he studied electrical engineering in Munich. He worked there from 1923 to 1929 as assistant of Prof. Max Dieckmann, w ...
, a pioneer in mechanical image scanning and transmission. The 1888 invention of the
telautograph An early telautograph The telautograph, an analog precursor to the modern fax machine, transmits electrical impulses recorded by potentiometers at the sending station to servomechanisms attached to a pen at the receiving station, thus reproducing a ...
by
Elisha Gray Elisha Gray (August 2, 1835 – January 21, 1901) was an American electrical engineer Electrical engineering is an engineering discipline concerned with the study, design, and application of equipment, devices, and systems which use electri ...

marked a further development in fax technology, allowing users to send signatures over long distances, thus allowing the verification of identification or ownership over long distances. On May 19, 1924, scientists of the AT&T Corporation "by a new process of transmitting pictures by electricity" sent 15 photographs by telephone from Cleveland to New York City, such photos being suitable for newspaper reproduction. Previously, photographs had been sent over the radio using this process. The Western Union "Deskfax" fax machine, announced in 1948, was a compact machine that fit comfortably on a desktop, using special
spark printer Spark printing is an obsolete form of computer printing File:Printer.ogv, A video showing an Inkjet printing, inkjet printer while printing a page. In computing, a printer is a peripheral machine which makes a persistent representation of g ...
paper.